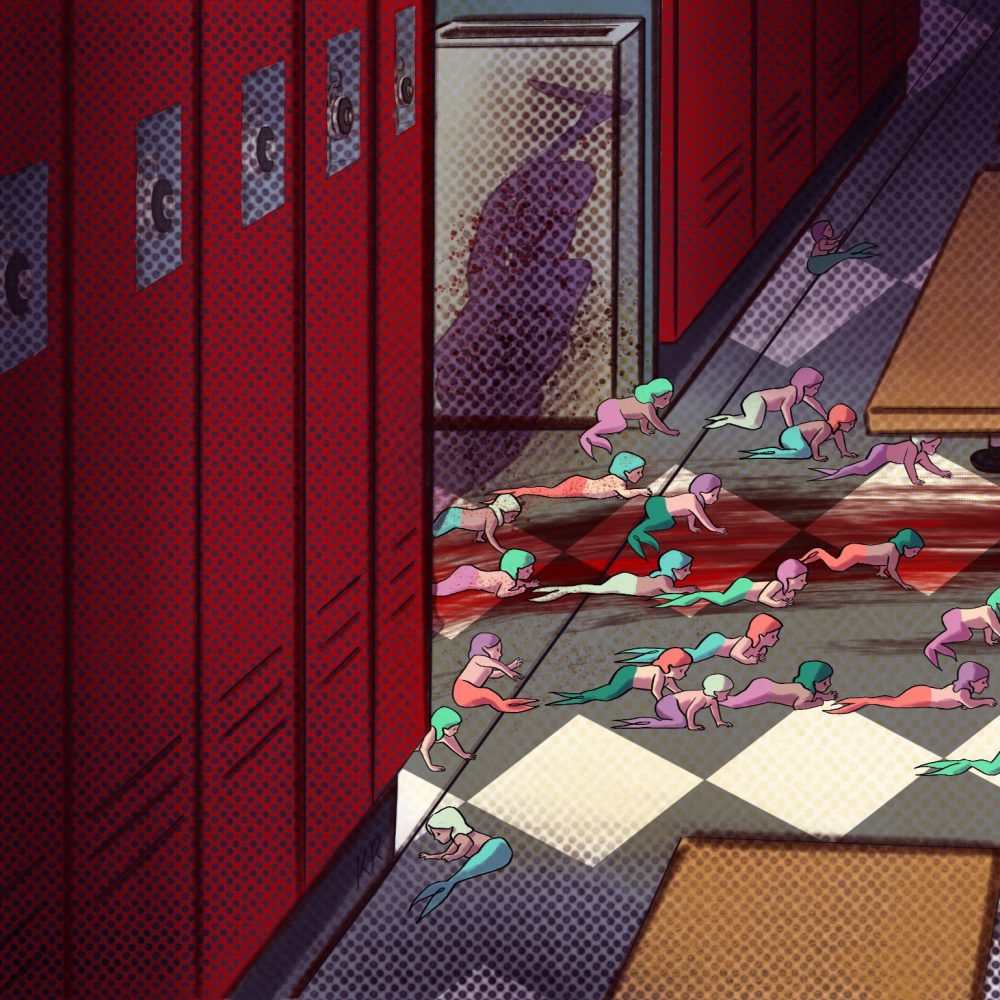 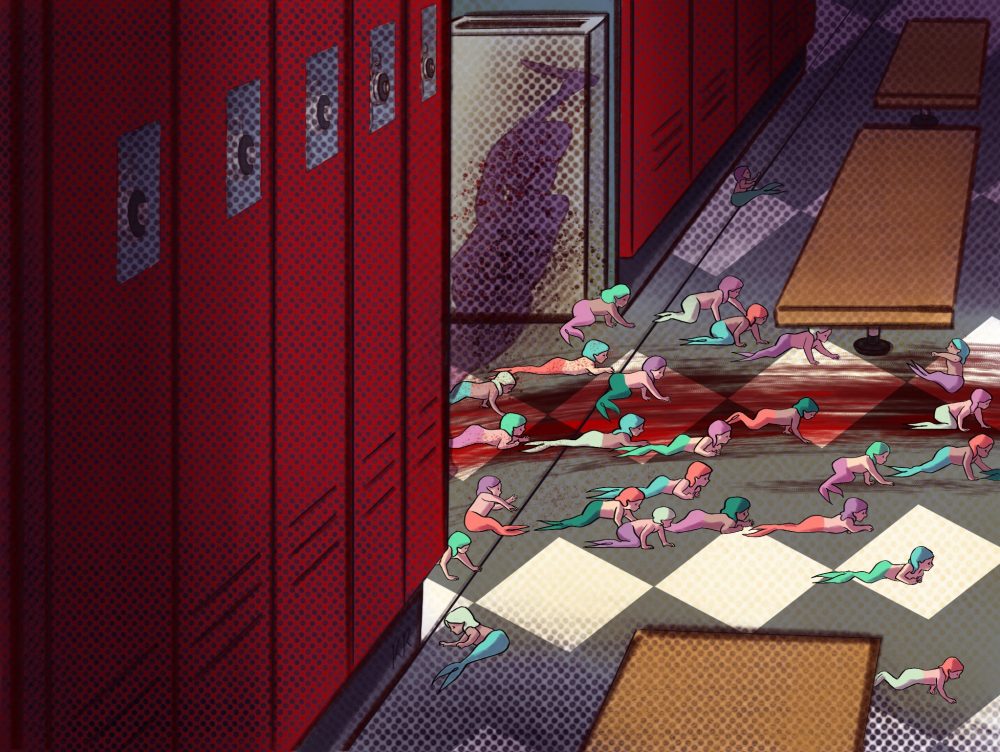 We never asked about Lorelei’s past though origin stories abounded. Her father had an adventure while fishing. Her mother was a mail order bride from the sea. Her aunt found her in a bucket of chum.

She rolled around the halls of our high school in a bright copper tank. There was an ongoing raffle to raise money for nicer accommodations.

Does it matter where she came from? I knew a certain truth about the girls in our coastal town. Every month I expelled little mermaid parts, sometimes tiny, always thrashing.

We were dancing in someone’s game room. My face was numb from beer and weed and I was one with the bass. Lacey Neal pulled me into a tiny guest bathroom.

“We have to stop her. She’s stealing all our boyfriends.”

I lost my dinner on the swirling black-and-white floor tiles before I could protest. Lacey ignored me and went on: “Like, who would know? Take her far from any beach and ditch her. Seriously. Let her dehydrate.”

Before I passed out I imagined us offering our shaky alibis to a crustacean courtroom. We both had pastel tails, but while I breathed out nervous bubbles, Lacey choked on saltwater. The lobster judge had no sympathy for us.

We cut her up during our free period. She submitted with a passivity that was disconcerting.

Murder only made things worse. Had we run into an egg sack, or was every mermaid composed of hundreds of evasive little mermaids? We tried to flush them. We threw them out the window. We stowed them in the science lab. We would have taken them down to the sea but they wriggled uncontrollably, causing multiple purple bruises.

For weeks the toilets backed up. Nobody would go near the restrooms.

One Monday morning, Lorelei was back as if nothing had ever happened.

She tried to make us into her lovers. First Lacey, then me. Then Lacy and me at the same time. Then me alone, sneaking around to sleep with Lorelei but pretending I hated her.

“Well it wasn’t either of us,” Lacey said, safe and smug.

“Why ever not?” Lorelei laughed at us. Didn’t we know we could be the responsible party?

“Not where I come from, but maybe you should talk to the nurse.” Lorelei smiled at me as we waited for Lacey to leave. Then she popped off her shell bra.

I didn’t know how to prepare to be the possible mother of a hybrid. I didn’t know what to knit, so I fashioned a few pieces with tail attachments. Nobody asked what I was doing. Nobody congratulated me.

Lorelei moved on to the football team. Suddenly the funding came through and she was able to sit in a luxurious fifty-gallon aquarium at every game and every party. The quarterback held her hand during newly significant rock ballads.

My heart felt as though it had been run through with knitting needles and it finally occurred to me: this is how it happened to Lacey.

“Could you possibly forgive her? Look, we get a certain amount of funding for foreign exchange students. I don’t expect perfect harmony, however. I want you to open yourself to new possibilities. Different cultures. It’s the only future left for your generation.”

I tried to smile at the principal. “I’m a little concerned about this child she’s having.”

“Well, then,” he stuttered, rising to usher me out the door. “I expect that Lorelei will know what to do about it.” He reached down to give me an inappropriate touch but corrected himself at the last minute.

On the day after the big game I walked into the girls’ restroom and found Lorelei’s tank on its side, a puddle of garnet blood beside it.

The baby, I thought, as I ran through the halls. Still, I didn’t know what I was looking for.

The football team charged past me carrying Lorelei on a stretcher. She was not injured, nor did she exhibit any distress. “We’re cutting class,” she said. “Beach party. You should come.”

“Wait. What happened? I saw all the blood in the restroom.”

She smiled in response and tossed me a scarlet bundle. I unwrapped it as my own blood pounded in my ears, but inside was what looked like a gag. A cheap carnival prize. A crappy party decoration. A failed art project. When I shook it, a sand and seashell mixture flew through the air. “Come back here! What is this?”

A door opened. The French teacher stuck her head out and spoke to me in perfect English: “You’re going to have to keep the noise down while class is in session.”

Lorelei disappeared before graduation. Lacey seemed relieved. I could not get the quarterback to talk about it. The principal barely recognized me.

My mother accused me of jealousy. My father wouldn’t stop bragging about his conquests.

I had a goal: to get her back. To talk to her some more. I wanted her shimmering body as well, but mostly to convince myself it was real.

I kept looking for mermaid traces during my time of the month, searching and searching. I spent a lot of time in the girls’ restroom. Lacey would often stand outside the stall and wait for me. Sometimes she would rattle the handle.

“I just want to know why I was never enough for you,” she would say, pleading. “Give me a sign. Please. Why won’t you talk to me?”

I pressed my body against the door. It was nice to be wanted again.

Jan Stinchcomb is the author of The Blood Trail (forthcoming from Red Bird Chapbooks). Her stories have recently appeared in Black Candies: The Eighties, Whiskey Paper, Atticus Review and Monkeybicycle, among other places. She is featured in The Best Small Fictions 2018 and is a reader for Paper Darts. Currently living in Southern California with her husband and children, she can be found at janstinchcomb.com or on Twitter @janstinchcomb.