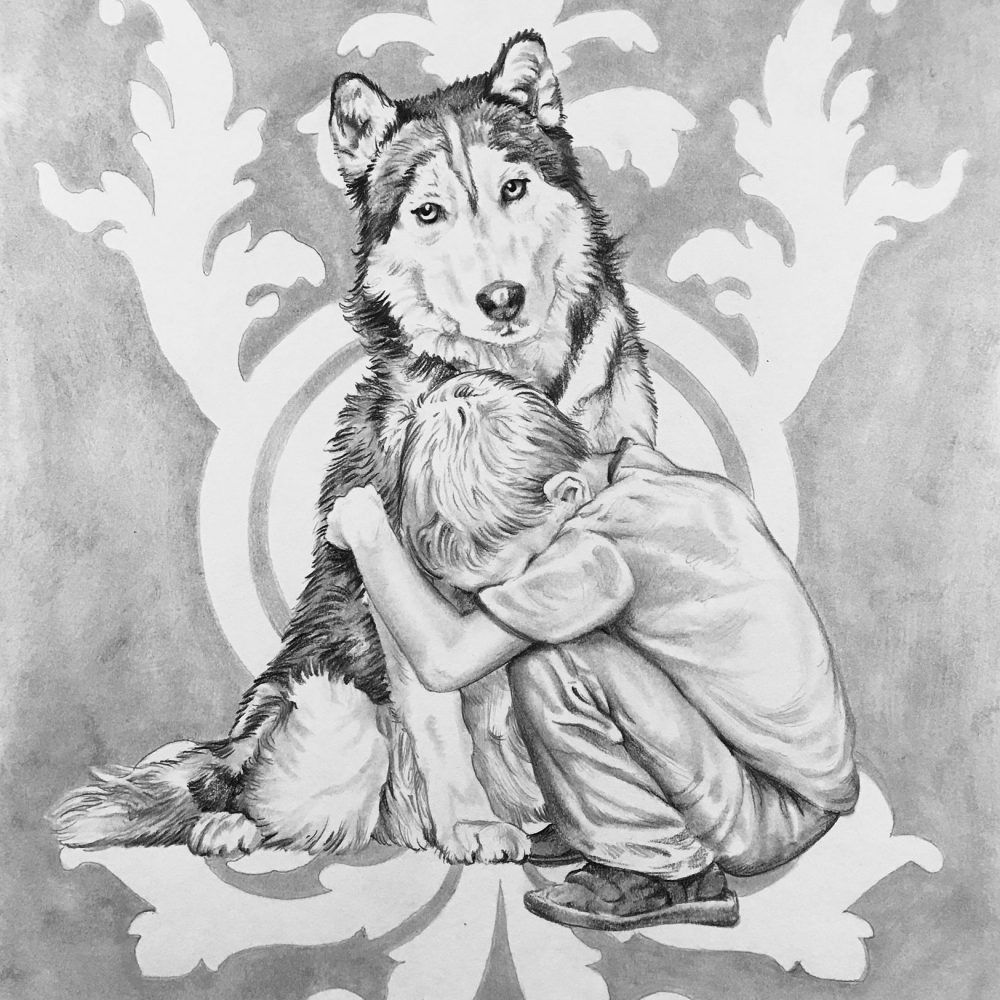 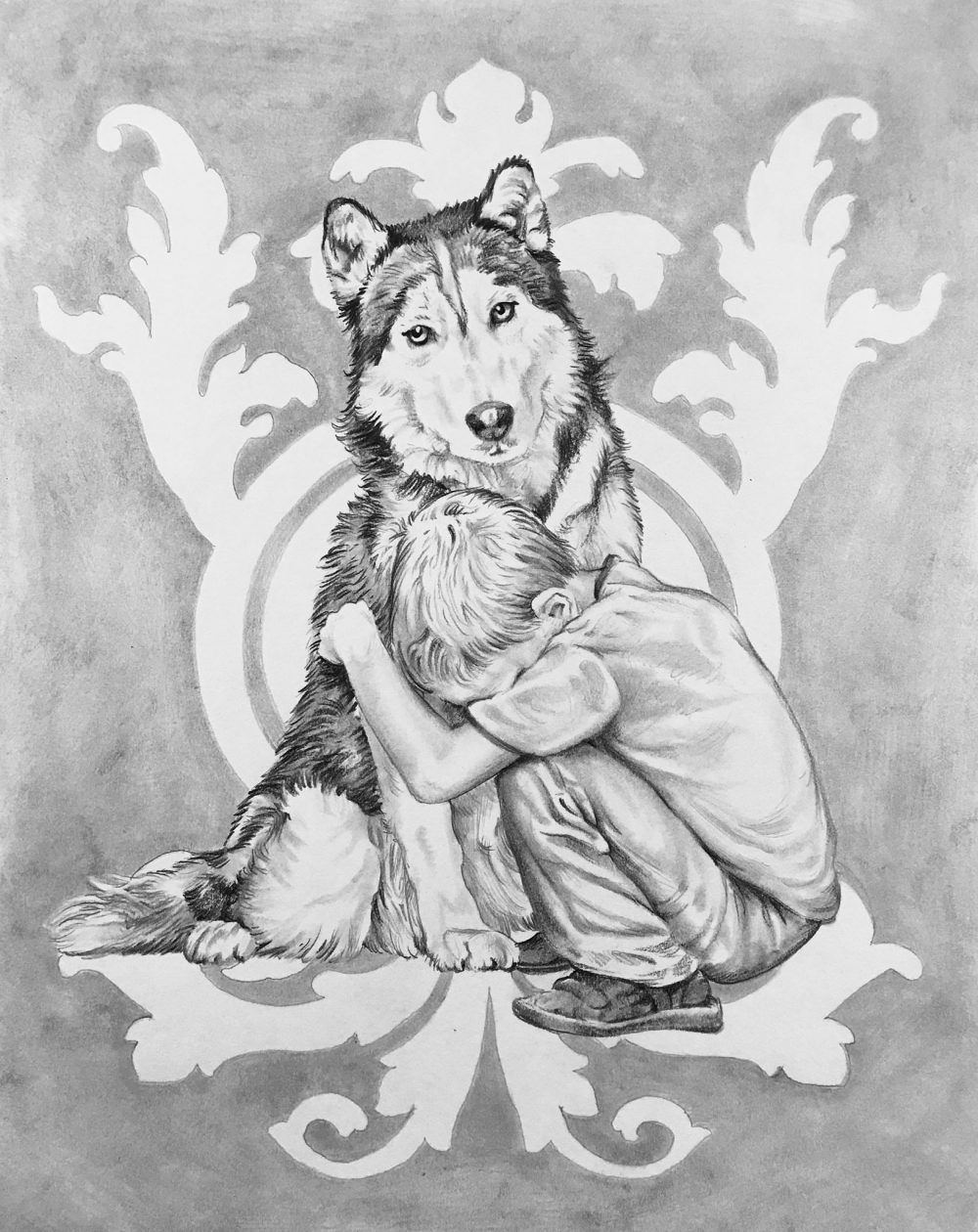 Love may be the most powerful thing on earth, but it could not stop the men who took Caleb and his mother.  Cato chased the van and then the cloud of dust until all he could see was dry road and dead scrub. It was the summer of fire and the smoke curled the scent of Caleb—and other children too—downwind.  Cato pricked his ears. He could pick out Caleb’s voice. The camp must be close.

An hour later, mouth foaming, Cato slowed to a trot. Steam rose from a shallow puddle in the gleaming asphalt. Cato went to drink, but the puddle receded. Cato panted after it until he collapsed and was struck by a Honda Civic headed for San Diego.

You’d think the driver would not stop, but the driver had meant every “like” she’d clicked on an animal rights Facebook page, so despite Cato’s sweat-mudded coat and bleeding paws, she spread her beach towel across the Civic’s back seat and Googled the nearest shelter.  It was a high kill shelter, most are down there, but the driver didn’t know that and—a twenty-dollar donation later—she zipped off feeling saintly.

An addict bathed Cato and put him a small cage next to a crying Husky.

Gorgeous was crying because she was hot; her fur fell off in clumps. She hated the food. She missed her stuffed squirrel and the other dogs tried to bite her because—beautiful and house broken—they knew she’d be adopted within hours of opening.

Only to run off again.

“While I get processed,” snapped the terrier.

But mostly Gorgeous was crying because she was a Husky in a cage and Huskies must run.

Cato told Gorgeous about Caleb.  How they traveled at night and how Cato protected Caleb and his mom.  How, even in the day, asleep in Caleb’s arms, Cato drove off the nightmares that hounded his boy. Cato pressed his neck against the wire. Gorgeous sniffed where the addict’s sponge missed and Caleb’s odor lingered. “There is a place just like this,” Cato promised, “but full of human children. When we go, you will find a Caleb of your very own.”

Gorgeous leaned her weight into Cato. Her fluff surged through the wiry squares, so that although they could not curl into a puppy ball they felt nestled in their sleep.

It was an accident that Cato was processed that morning, but an accident born of Love, because this was not just a recovery program; the shelter addicts Loved the dogs. Love kept them on Facebook, and Twitter, and even the phone, begging the no-kill shelters up north to take their overflow. Love (and coffee) drove death-row-dogs to Vermont and New York, but this same Love necessitated an almost inhuman detachment on the mornings they processed the damned. So, while Love (and a court order) were powerful enough to get Rhonda to the shelter early that morning, Love could not combat the sleep deprivation that made her fumble with the leashes as she and three other addicts took six dogs a piece out for a walk, while the Shelter Directors processed those who’d gone thirty days without adoption. Although the Terrier had been there forty, Rhonda leashed him and hung the “Process” clip on Cato’s cage.

The moment the addicts turned back for the shelter, the dogs knew what had happened—they could smell it. The Pit Bull dug his nose into the ground to block the scent. The Great Dane rolled and so doing yanked his leash, jerking Rhonda to her knees. The German Shepard—a good dog whose owner was at that very moment taping up “Have You Seen Buddy?” flyers—barked for order.

Gorgeous slipped her leash and ran.

She was not running away, although that would have been a good idea, just running.  Her lungs thrilled to capacity.  Like Cato’s, her feet—evolved for snow—burned and bled, but Gorgeous did not notice.  She raced with the ecstasy of a long-caged contortionist or an exploding star. For a Husky, relief demands three miles at full speed.

Gorgeous could not tell when she began to smell it. Perhaps the scent guided her. More likely it was just that the road was straight and clear and led directly to the camp, but when she came to the fence (and so to a stop), the fragrance was overwhelming. Caleb.

Other dogs might balk at a razor fence, but Huskies are blind to deterrent. Vaguely recalling the damp loam and roses of her third forever home, Gorgeous dug. The caked earth fell in on itself, crumbling beneath her paws like sand, so that when Gorgeous slipped under the razors, leaving a thick foam of fur on each blade, it felt more like swimming than tunneling.

Gorgeous emerged, as Cato promised, in a yard full of children.  Some ran to pet her. Some thought her a wolf and parted like waves when she charged into them, sniffing for the boy who smelled like her friend.

Gorgeous threw herself belly up on Caleb’s feet. The four-year-old buried his face in her fur. In the bliss of Caleb’s Arms, Gorgeous dreamt moonlight and gallops, safety and bacon, and cat poop and snow.

Driving your Honda Civic, you know it didn’t last.

They tore Gorgeous away, leaving Caleb only fistfuls of fur.

Cranking your AC, you hope—reasonably—that Gorgeous will be adopted again (she will) or escape again (that too).

Love will not stop you from hitting the gas as you pass the old Walmart, but Love keeps Caleb breathing, staring down the road, hoping for the miracle to repeat, for Gorgeous, or Cato, or any dog (but mostly Cato) to come again. He leans on the fence, his fingers dodging the razors, his pockets full of fur.