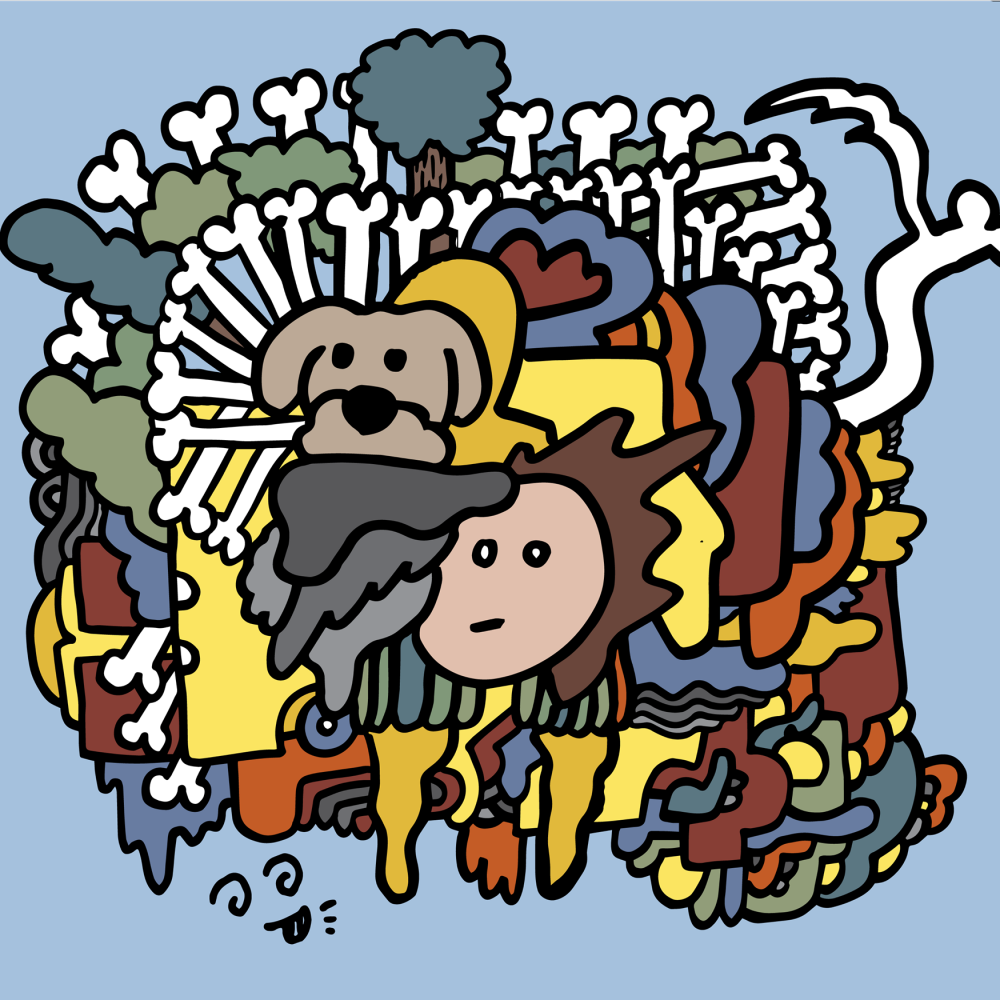 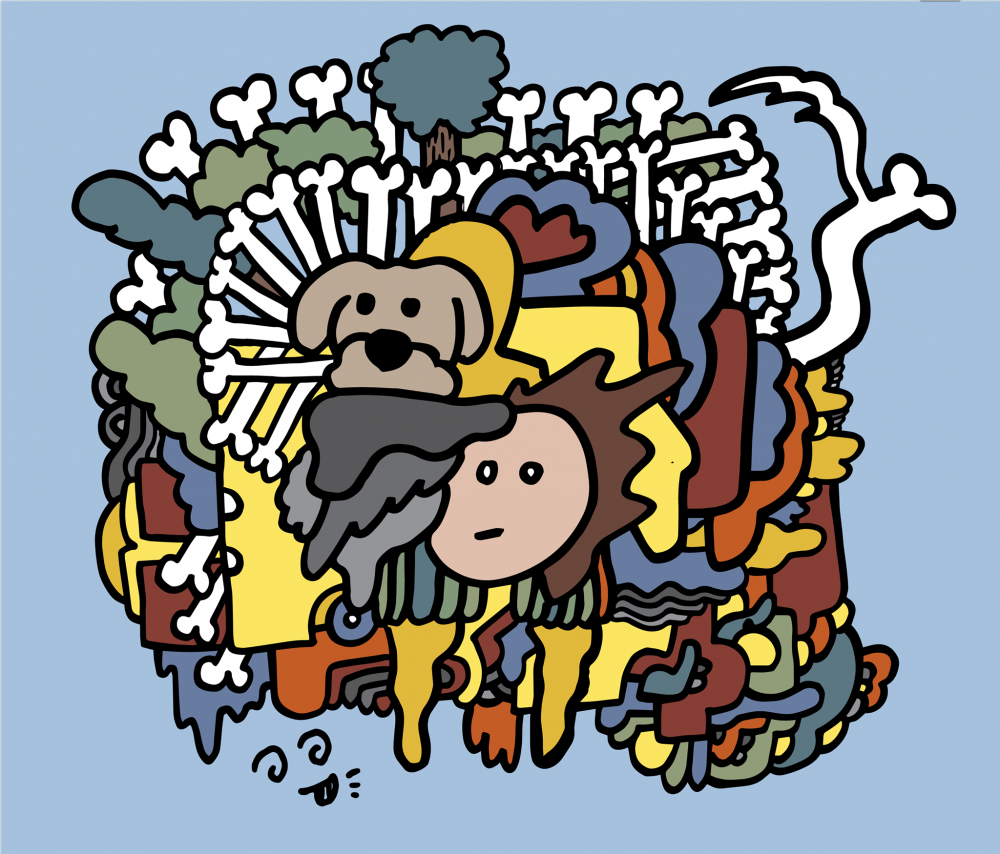 I can’t tell if my dog loves or hates the bones. She finds them wherever we go. A bone in the parking lot. A bone under the mesquite tree. She finds bones where bones don’t belong. A bone in my backpack. A bone under the passenger’s seat of my car. A bone under the covers of my bed. When my dog finds a bone, she carries it home. She plops down on the couch with a sigh, holds it between her paws. Gnaws until her mouth foams. Gnaws until her gums bleed. Every bone is a little different. Some are wheels. Others are tiny, shaped like the spine of a feather. Once, she finds a bone that looks so much like a human clavicle that I worry one day she’ll realize I am a body containing a skeleton. On the internet, I learn that humans are born with 270 bones, but as we grow, some of them fuse together, and by the time we’re adults, we have only 206. That’s still a lot. I have nightmares in which I wake to my dog’s teeth locked around my wrist. You have so many, she says in my dreams. Just give me one. When I wake, I try to hide the gnawed-up bones somewhere she won’t find them, but she always finds them. She finds the bone I hide in the crisper drawer of the refrigerator, the one I hide it in the bathtub behind the shower curtain, even the one I bury in the backyard under a creosote bush to throw her off the scent. Sometimes I can distract her from the bones. I distract her with jogs around the neighborhood, with trips to the pet store for chew toys shaped like ferrets, with long hikes in the mountains south of our home. But I see her eyes drifting from what’s in front of us. She’s always searching for the next bone, and as long as she’s searching for it, she finds it. One night, tired of fighting, I let her take a rabbit’s rib into bed. I let her sleep at my feet with it tucked beneath her paws. When I wake in the morning, the bone looks different. Still tucked under my dog’s whiskery chin, it’s now nearly the length and thickness of my arm. One end has sprouted what looks like little antler nubs. I leap out of bed, like the bone might grow hands and reach for me through the sheets. I pick up an old shirt from the floor and use it as a glove to carefully pull the bone out from under my dog without waking her. Then, in my underwear and bare feet, I dash into the side yard and throw it in the green garbage bin, slam it shut. In the bathroom, I wash my hands with soap and water, get dressed and brush my teeth. I try to breathe in through my nose, out through my mouth. Through the window, I can see the trash bin. It’s still four days until trash pickup. I imagine the bone cradled between bags of warm garbage, growing legs through the afternoon, growing talons, growing fangs. I put on my tennis shoes. I go back outside with a black trash bag and open up the bin. The bone hasn’t changed in the thirty minutes since I threw it away. I take that as a good sign. I hold my breath, reach in, knot the bone inside the empty bag. Then I leash my dog. Together we walk down the street and into the dry river wash. We walk past the chollas, past the family of quails chip-chiping into the underbrush, past veins carved into the sand by flash floods last July. I carry the bone in the bag, arm outstretched so it doesn’t swing against my leg. After we’ve been walking for twenty minutes, I loop my dog’s leash around my wrist, drop onto my hands and knees, and dig. I dig with my hands, with my nails. It isn’t easy, because as soon as I make any progress, the hole collapses in on itself, the dry sand and dirt and bits of rock unable to hold a shape. I don’t realize until I stop to wipe sweaty strands of hair from my eyes with the back of my hand, that while I’ve been digging, my dog has torn through the bag and is holding the bone in her jaws, tail wagging, looking at me expectantly. No, I say. Drop it. Drop it. I don’t want to touch it, but I do. I grab the bone by its knubby antlers, pull and pull until it slips out of my hands. I hook my fingers between my dog’s jaws and try to pry them open like I crack open the shell of a pistachio. Her tail wagging the whole time, like she knows my fingers are no match for her mouth built for tearing sinew from skeleton, capable of felling a grown antelope. I give up and sit cross-legged next to her in the dirt. She sits, too, bone between her paws. I can see the muscles in her head moving as she chews, muscles I didn’t even know she had. Her eyes bulge. She looks straight at me as she chews. I wonder if maybe the bone didn’t grow on its own, but grew through some magic stored in her. Old, dog magic passed down from wolves, magic no human has been able to domesticate away. I wish I could speak in a language she’d understand. If I could, I’d ask her about the magic. I’d ask her why she chews. I’d ask her what ancient call she’s trying to answer by gnawing at these bones, trying to break them even as they grow. And if I could, I’d tell her that no matter how hard she tries, she’ll never be able to chew the bones down to nothing.

Dana Diehl is the author of Our Dreams Might Align (Splice UK, 2018) and the chapbook, TV Girls (New Delta Review, 2018). Her collaborative short story collection, The Classroom, is forthcoming from Gold Wake Press in 2019. Dana earned her MFA in Fiction at Arizona State University. She lives in Tucson.