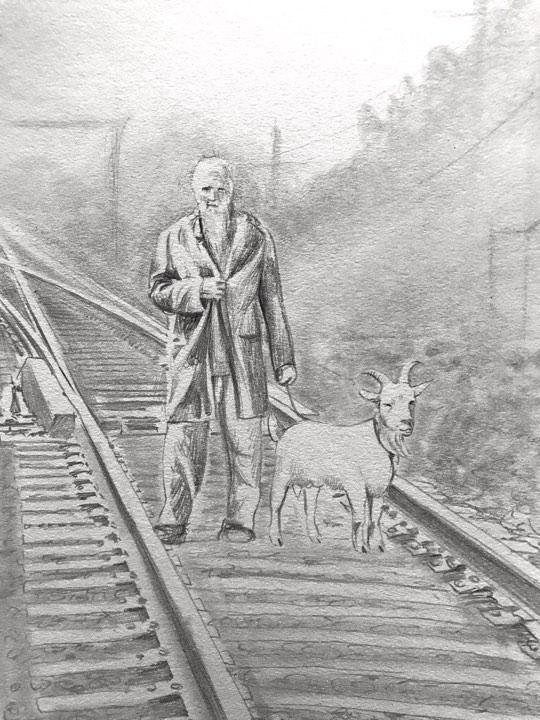 Mick is a rough-and-tumble sort of kid. He smokes a pack a day that he steals from the drugstore while his buddies knock over the magazine racks so the pretty girl behind the counter screams at them and chases them all out with a rolled magazine. He likes to tell stories from the train yard, where he lays spread eagle on the gravel beside the tracks and puffs smoke at the clouds.

“So’s there was this old man, right? And he was the scary sort, always poking around in other folks’s business and never saying much at all. He lived out back in the woods in this tiny shack that he built with his own two hands, right? And he only ever came into town when he couldn’t hunt no more deer ’cause theys were all dead and gone already, or when he couldn’t find no more rabbit or squirrel or the crick was frozen solid. So there was no fish neither. He even kept his own goat out there, tied to a tree all’s the time, so he could get milk, you know?

“I seen him once—just once—when he came into Pap’s barber shop for a shave. Looked like he hadn’t had no shave in years, since before even Pap was born I reckon. So he comes in and gets a shave and a haircut for two bits, like they used to back then when I was sweeping the shop and thought it made me all growed-up.

“He didn’t say nothing at all the whole time but he kept watching out the window like a hawk and I knowed he was watching Miss Candy across the street in the soda shop. She was a looker, she was. I remember she always gave me an extra peppermint even when I didn’t ask for it and some days I’d go over just to help her sweep the floor so’s to spend time with her. No wonder the old man was watching her, I thought, every red-blooded man in town watched her.

“After Pap gave him a shave I saw him leave and go straight for the diner and I could see Miss Candy trying to get away and such and then he left and I reckon we thought we wouldn’t never see him again ’til he needed another shave or needed something from the general. But we all seen him again real soon, again that same night after Miss Candy turned up dead over yonder in the churchyard, all beat and bruised and looking like a ghost already. The whole town went out to find him and they sure found him alright, acting like nothing never happened with his goat and a rabbit hanging dead over the fire.

“He never talked none and it weren’t no different then. Didn’t say he didn’t do it, didn’t say he did. Just let the men run him right out of town, right along these here train tracks. It was before this new bridge was built, so it was just a trestle there over the crick. Everybody said the same thing, that old man stopped right there on the old bridge and looked back at everyone standing there and then a train come ’round the bend. Everybody swore’s they seen him there just as the train came – smack! – but no one never found a body and no one never heard from him again.

“But I reckon he’s haunting this town, walking the tracks and the woods and that’s how’s come anybody who ever goes into those woods to see for hisself comes out looking like he’s just seen a ghost. I knowed this ’cause I did see the old man once, just the other day, and his goat too, standing right there on the tracks, there on the bridge, plain as I seen you right now.”

Mick stamps the cigarette out when he hears the train whistle coming for him. He gets up and brushes himself off, shaking his head. “That’s a story for some other time though,” he says and he lights up another smoke and jumps down from the tracks and disappears into the woods.

Sarah Reck, who lives and writes in Pittsburgh, is the design and prose editor for Hyacinth Girl Press. She holds an MFA in Creative Writing and MA in English from Chapman University and did her undergraduate work at Lycoming College.