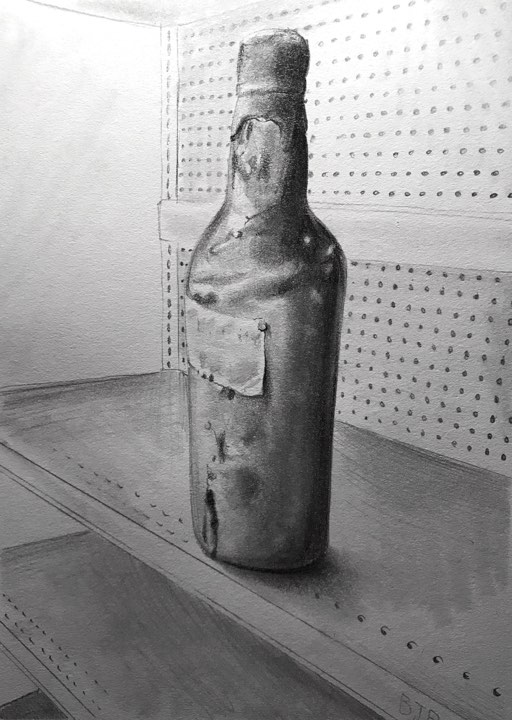 It was closing time at the shop. Reggie swept the floor in lazy half-moons, pantomiming actual work but gathering no dirt. A careful observer would note that he didn’t even carry a dustpan with him.

Mr. Gellert counted the money in the till. He snapped each bill with satisfaction. It had been a good day. Gellert’s shop had served the community for three decades and a day like this came only once a year.

The liquor shelves were bare, except for one curious bottle, imported from somewhere in the verdant hills of old Kentucky. The bottle had been on the shelf for so long that the memory of stocking it had long faded. Caked with dust, label yellowed and nearly indecipherable, it would most likely remain even after the building that housed it had turned to dust.

A time capsule hangover just waiting for its moment.

Reggie, almost finished with dispersing the piles of dirt evenly to suggest productivity, had worked himself up to the front door. He glanced at the clock which advertised some long since extinct brand of cigarettes.

Gellert nodded. Reggie turned and reached for the deadbolt, but was interrupted by the door slamming into his hand.

“Not in front of the customer, Reggie,” said Gellert, his nose deep in his ledger.

A dapper man, with top hat and cane stuck his head into the shop. “Excuse me, are you still open?”

Gellert snapped his ledger shut. “Of course, how may I help you?”

“Well, I’m a bit late for the annual soiree, but I thought it appropriate to bring a bottle anyway.”

Gellert motioned to Reggie. “Go in back now.” Reggie nodded. He gestured to the wide expanse of empty shelves. “I am afraid I cannot help you. Today’s events have cleared my inventory.”

“This?” Gellert took the lonely bottle down from its high perch. Its coating of dust was so thick that is slid off like sloughing skin. “I am not even sure I can sell it to you. It could be poisonous.”

Gellert placed the bottle on the counter. “Besides, I’ve already closed the register. I can’t accept payment.”

The dapper man loosened his bowtie. “I cannot arrive empty handed. That would be entirely unacceptable. Is there anything I can do?”

“I suppose you could try a taste. If it isn’t rancid or pure paint thinner by now, I think I will simply pass it on to you. I simply can’t suffer a desperate man walking the streets without his social graces intact.”

“Hm. Pour a shot of it and spare me the judgement.”

“So be it.” Gellert placed a glass on the counter, cracked open the wax seal on the bottle and poured out a syrupy shot. An antiseptic sting wafting upward nearly floored them both.

The dapper man took a step back. “Whoa.”

“Whoa, indeed,” said Gellert as he slid the glass forward. “The deal is sealed. Do not hesitate and take your drink.”

The dapper man raised the glass to his lips. His nostrils flared, burning from the scent of it. He stiffened his back and made a gratuitous grand gesture. “Here’s to your health!”

He swallowed it in one painful gulp. Gellert stood in silent observation.

The dapper man swallowed the rest of the sentence. His face became flushed, blood exploding under the skin of his cheeks, first pink, then red, then purple, then black. Sweat erupted from his forehead. He ripped his top hat off as he began to cough heavily, as if to force some demon from his lungs.

The dapper man attempted to brace himself on the counter as his eyes rolled up inside his skull, leaving nothing but milky whites. Unceremoniously, he dropped to the floor like a sack of dirty laundry.

“Reggie, come out please,” said Gellert. “Take him and throw him in the dumpster.”

“Poor guy,” said Reggie. “He must not be from around here. He would have known about today.”

Gellert nodded. “Everyone knows that we don’t tolerate tardiness in this town.”

Gellert wrote something in his ledger.

“Now we can close for the night.”