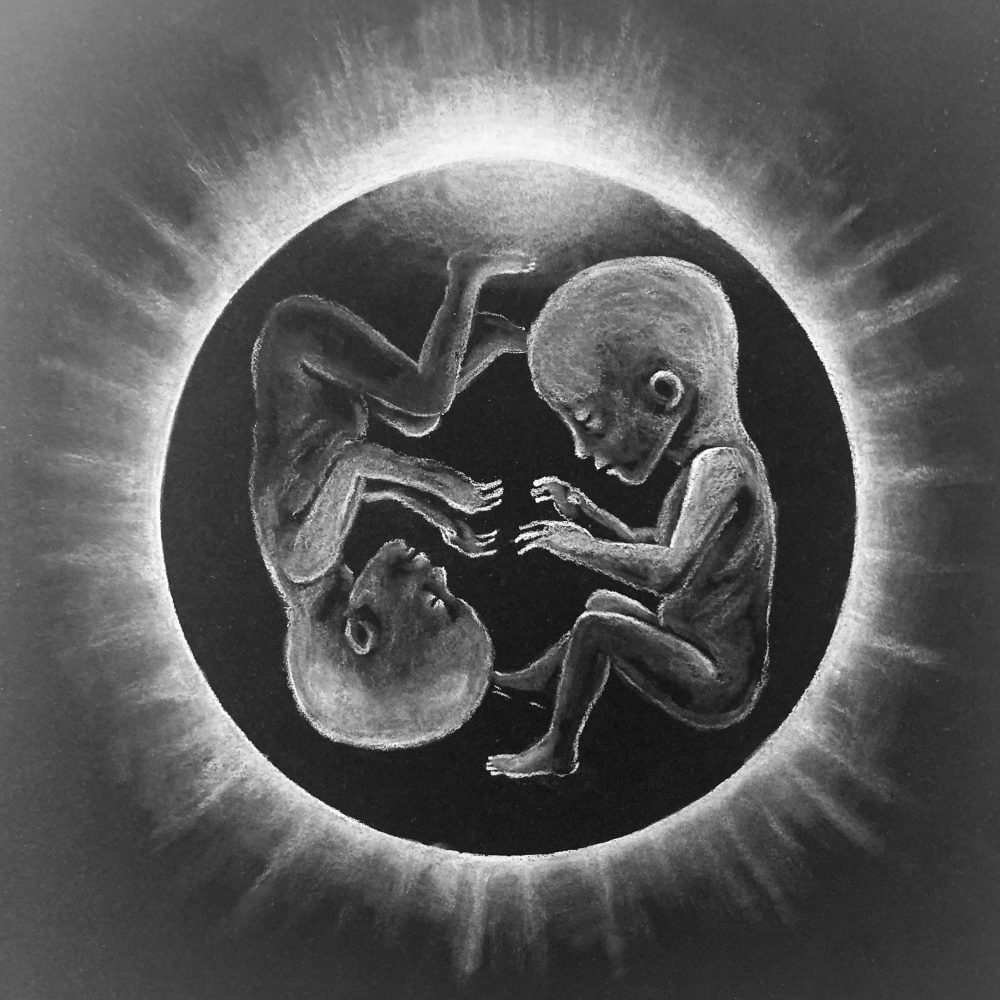 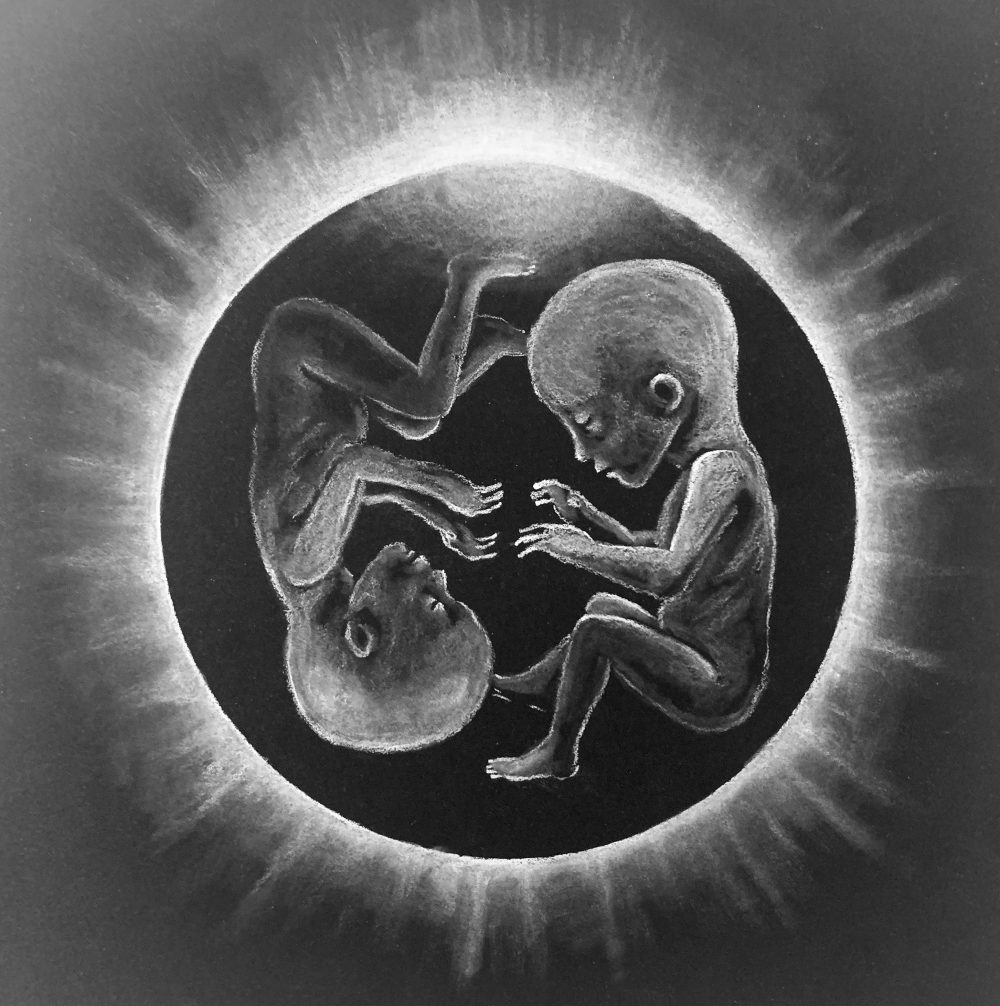 When mom would get tipsy, she’d tell this story. She had only one; beautifully embellished, wild with gestures, impeccable timing, and heart dropping punchiness.

“It was a brutal labour.” She’d look around the living room and declare, “You guys couldn’t begin to imagine, and all this shit without an epidural.” She was always smiling ear-to-ear when she said it.

“Mason was halfway out when he just stopped coming. His umbilical cord was pinched and his heartrate dropping. The sweat was dripping off the doctor’s forehead and his face seemed contorted into the strangest shape. I pushed for dear life. For your dear lives.  Then, after another round of pushing and screaming there Mason was, covered in all my blood and fluids, perfectly still. Don’t you dare. My stomach sank. I watched doctor count 1-2-3-4-5-6, tapping his little heart with a gentle intensity. Then on the 7th beat there it was. A strong cry from the depth of his little chest signalled to his brother, a rallying call, letting him know that it was safe out here. Like a game of follow me they were playing, Mark came quickly after, but without the drama and theatrics of his older brother.”

“No word of a lie, the nurses started crying because as soon as they were handed to me, the first thing Mark did was grab Mason’s ankle. He was holding on so tight the nurses could barely pull them apart.” Mom would bow low, then swig her red wine. We all loved it. Every time.

When we turned eleven, we were excited to celebrate at school. We stepped into class with our matching yellow birthday boy pins, but the class was already going nuts. “You look straight at it! You’ll go blind and die!” a kid blurted out proudly. Ms. Paitich had taught us the word totality. It was the brief period during an eclipse when you could look up at the sun, entirely blocked by the moon. All goes dark and only then, is it safe to stare. She handed out sunglasses and walked us outside. It was the nineties. No committee of overzealous parents to vote on the ethics of the phenomenon.

In the yard, my hands were clammy. I was too nervous to look up so I watched my brother instead. His glasses were off, staring up at the eclipse, ignoring every one of Ms. Paitich’s instructions. I looked at the other kids mustering up courage to steal timid glances. Something else struck me. My brother was glowing. Spectrums of neon light in colours I had never seen radiated off his skin. I ripped my sunglasses off to get a better look, but the light around us was so bright my eyes burned. I had to look away. When we got back to class, several kids begged to go home, saying they felt nauseous and that their eyes were burning, too.

In senior year, we were popular. People liked twins—a built-in party trick. On Valentine’s Day we were mysterious and conniving, Halloween, creepy and supernatural. Christmas, handsome in our matching knitted sweaters. We started a club, dedicated to the outdoors. Half our year joined, and some sophomores. We had merch. Mom’s idea. Wicked fleeces, green and maroon hats and even whistles. There was always one loose around Mason’s neck. He drove us mad sneaking up behind us and blowing as loud as he could. In the middle of the night, sometimes in my room, sometimes across the house, you’d hear that sharp whistle in the dark and someone yelling his name as he ran off laughing.

For our grad trip we took the club to Coyote Gulch. After two nights of camping, we watched the orange sky crawl across dusty rock, hovering over the loop, then over us. We passed around a bottle of vodka, taking long sips, wondering what was next for us.

Mom’s call interrupted my first-year seminar. Her voice was shattered like a rock through glass. The TA had been rambling about modernism.

He was supposed to be on the easier trail, but he’d called an hour before to tell me he’d switched. I warned him that the storm was coming, and to get out of the park. But being the oldest he rarely listened.

The ranger told us that “unfortunately this happens quite often. Falls like this are common.” He had slipped off the rocks at Angel’s landing. What a thing to say to next of kin. There was nothing common about it. Mason doesn’t slip.

The funeral director acted like dead people were just furniture needing to be boxed up and shipped into the afterlife. I had to get away. From the talk of costs and tiny sandwiches. I squeezed mom’s hand and asked for privacy amongst all the caskets waiting to be filled.

I turned off the lights and felt my way through the room until my hands touched the wooden edges. I opened one and gently lifted myself inside. I closed the top. I thought I’d panic but I felt nothing. No increased heart rate or heavy breathing. Just a quietness. One I hadn’t felt since his death. The silence was so pure and uninterrupted, the darkness so unforgiving, I could focus on him alone. I mouthed his name and like some great dam finally giving way, I started sobbing. His short, magnificent life spun inside me like our old slide projector, beautiful moments clicking back and forth, paused in time.

My brother was born first, stared down the sun, and eclipsed the sky. I closed my eyes and mouthed his name again. I never told a soul, but I know that I heard it. A sharp whistle in the dark.

Sacha Bissonnette is an Afro-Trinidadian, French Canadian short story writer from Ottawa, Canada. He is a reader for the Wigleaf top 50 series. He has been nominated for Best Small Fictions and longlisted for Wigleaf Top 50. Wigleaf nominated his story "Glass birds" for a 2022 pushcart prize. He recently placed third in the 2022 Tennessee Williams/New Orleans Literary competition.

He is currently working on a short fiction anthology with the help of a National Canada Council for the Arts grant, an Ontario Arts Grant and a Youth In Culture Ottawa Grant and was recently selected for the Writer's Union of Canada - BIPOC Writer's Connect mentorship. He loves film and comfort food and tweets @sjohnb9