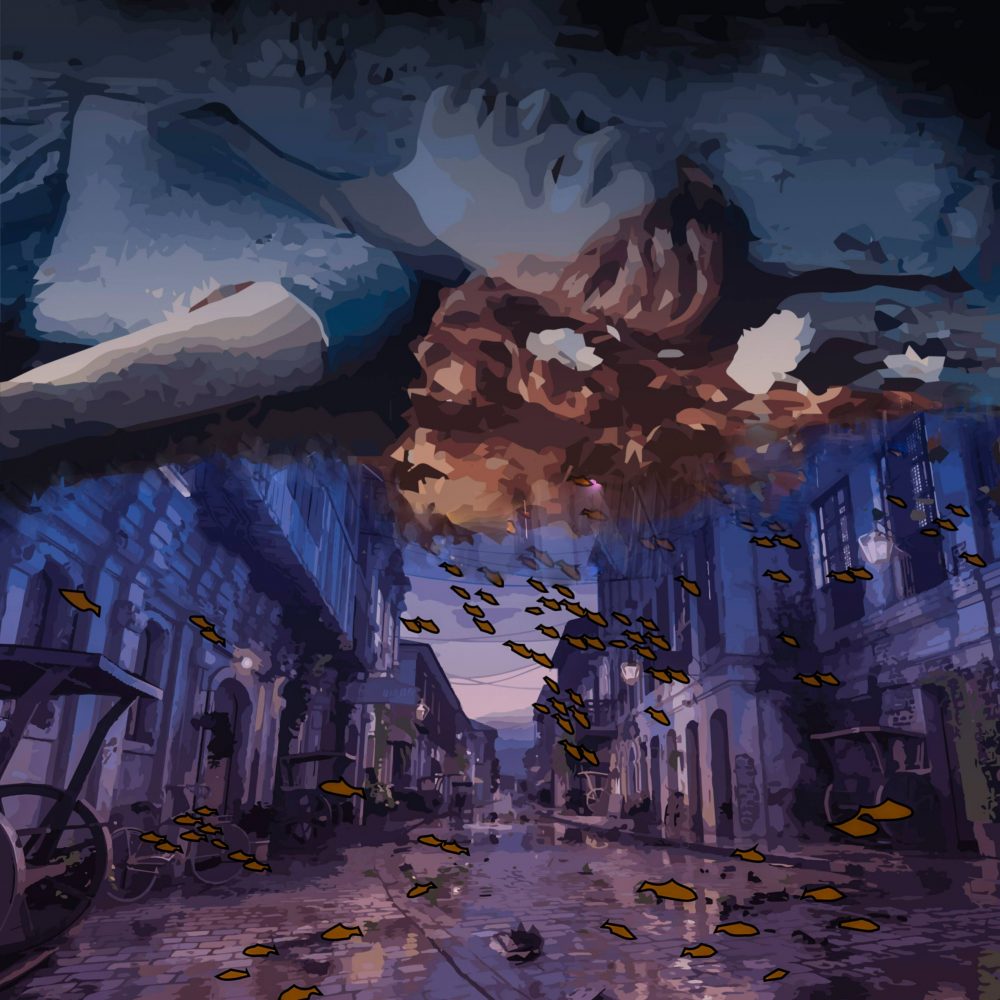 The moment my toe started bleeding – a dark red jewel-drop over the electric blue of my nail – I knew I was about to stop seeing. My vision had been blurring at the edges all afternoon under the pulsing sun. It was a long hike, one that I hadn’t meant to do alone. I was meant to have the hands of my sister waiting beneath as I scrambled the rock face on the way up. We were meant to camp beside this lake; share the weight of the rucksack. For the first time since she’d gone, I didn’t feel her with me anymore. At the edge of the lake, in a valley of steep mountains, I fell. One foot bare, into the mud, cheek first. The last thing I remember was my throbbing toe was finally cool.

When I woke I was in water; murky, but a glow was coming from somewhere. Panic set in, but I quickly realised I had no need to breathe. It was as if my lungs were gone, water just pooling at the back of my throat, coming in through my nose, going out my mouth. I moved easy, ageless and ache-less, as if the water was undoing the effects of time.

Shapes ahead arranged themselves into layered brick, square blocks and streets. Particles that moved like dust swirled slowly around an underwater village. I moved through it, half swimming, half walking; water ran over my skin like fabric.  There were drowned houses and shops, a chipped red letter box with small eyes catching the light inside the opening. Big, brown fish slinking over windowsills, softly butting their heads against the plastic of a butcher’s display counter; how it felt to be trapped in a free place. There were no signs of humans.

With the height I’d climbed that day, there was no way the sea could have swamped this village. The lake I had fallen beside was not the same one I had come into. A small part of me knew, somehow, that all water was connected. I could have easily slipped into one of its many tunnels, connecting there to here. I tried to put my hand onto the door frame of what seemed to be a sweet shop. My eyes widened in terror as I realised my arm was so much shorter than it used to be. It was ridged, murky like the rest of the water, and floating in a liquid, silky way that told me it was meant for swimming. Roving my eyes, I realised that my legs were gone; what was left was the cool feeling of a bleeding toe soothed. No rucksack over my shoulders. I was a brown fish, just like everybody else.

Without the illusion of legs, swimming was easier. I flicked my tail to turn into the shop and went in to watch light play on the glass of the tall jars behind the counter. I bared my teeth and let the sweet shop water fill me up, like I used to breathe in the steam of hot chocolate when I was a little girl. I thought about how wiping me from my old life, in one blip, wouldn’t have really changed a thing up there. I thought maybe this was my deepest, darkest desire when I was climbing that mountain. I thought how bright the world seemed with these eyes, and how having hard scales instead of skin made the world feel so much softer.

Lucy Smith is a flash fiction, short story and prose poem writer from North West England, currently based in Wales, where she has completed an MA in Creative Writing, two writing residencies and co-written an audio story. She runs Talking Ink, a podcast showcasing flash writers and poets. Her work has appeared in Ink Sweat and Tears, Palm-Sized Press, Lost Balloon, Cease, Cows and more. Her fiction has won awards from Legend Press and Lancaster University. Find out more on her website: lucysmithwriter.wordpress.com or follow her on Twitter: @lucysmithwriter