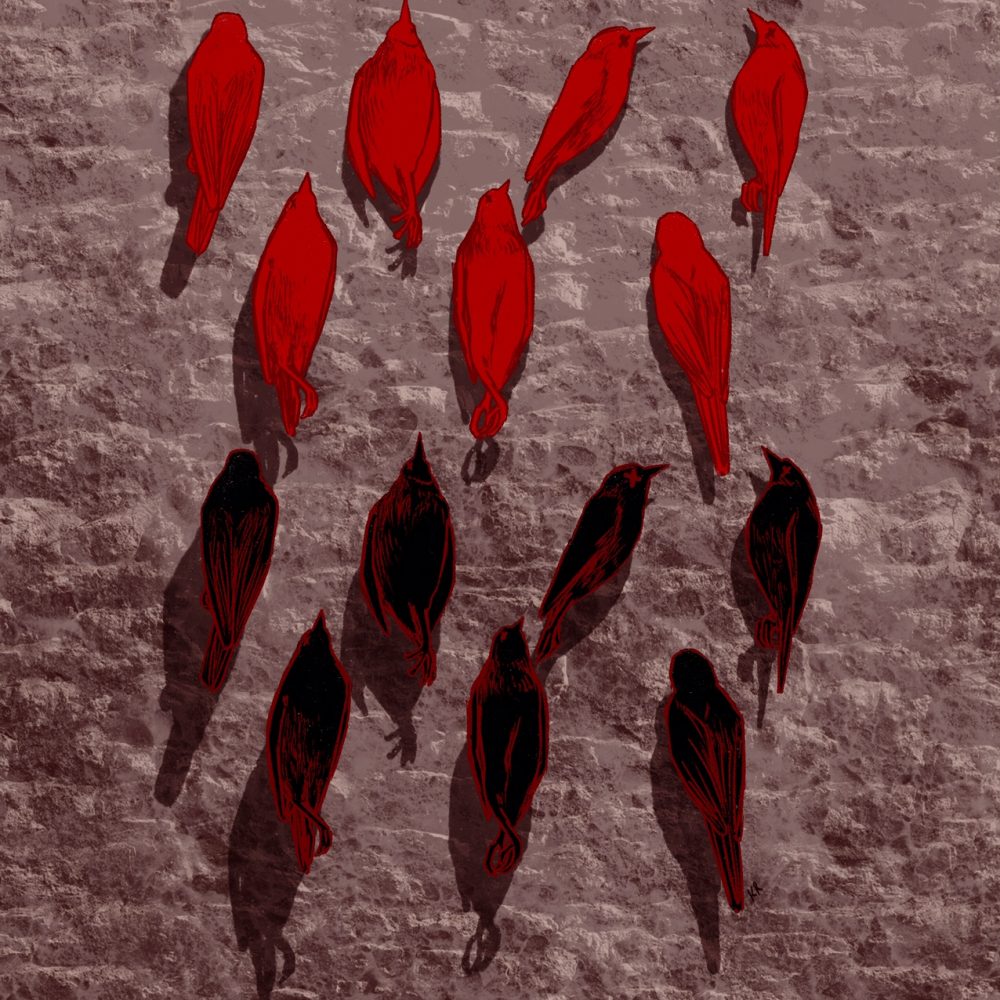 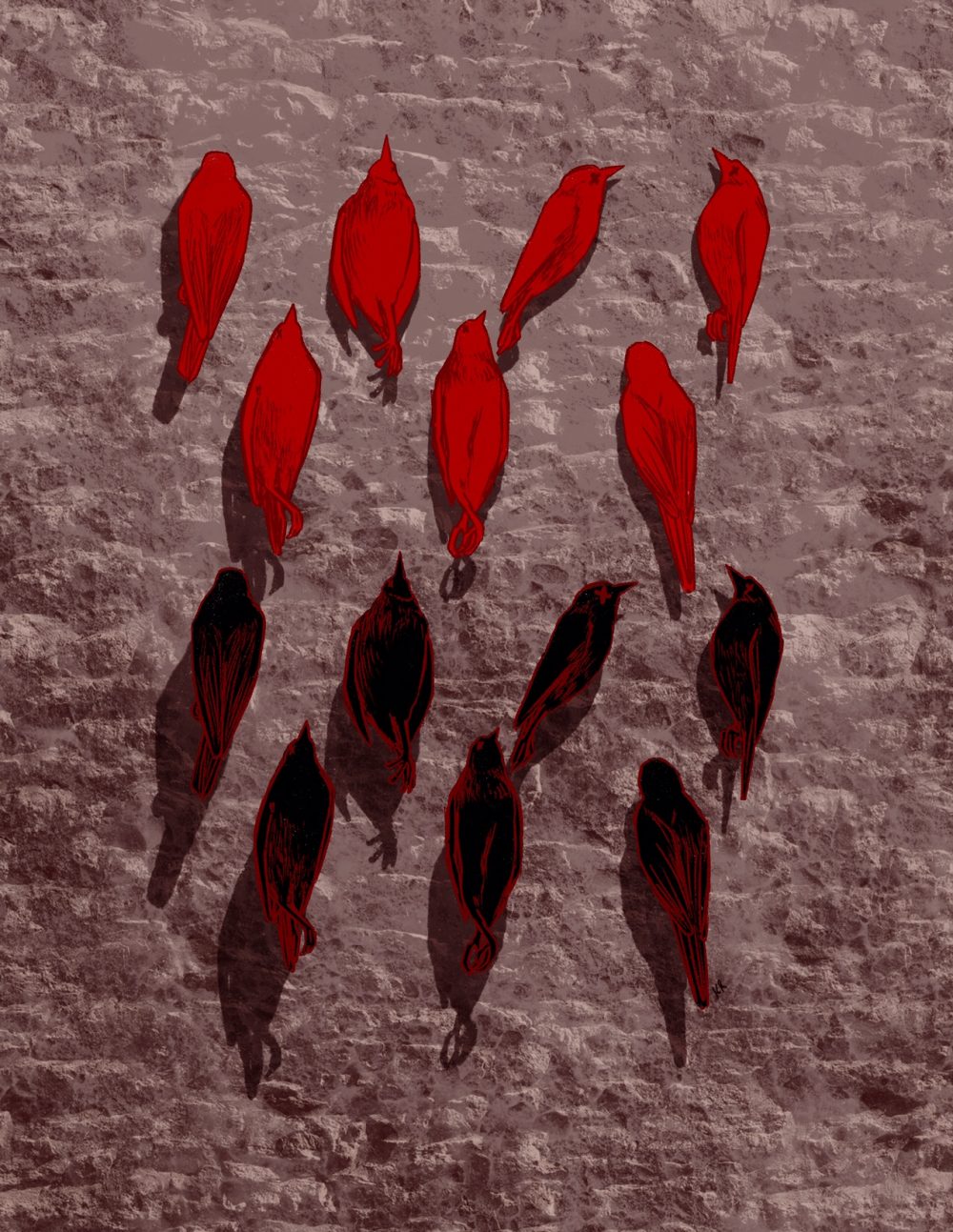 It had been raining red-winged blackbirds in Milltown, Ohio for three days. They thudded against Sean’s umbrella as he picked his way through the bodies on the sidewalk Monday morning, determined to go to the office as usual. He probably wouldn’t get much work done, none of them would, but it was better than staying at home alone, listening to the thump of blackbirds falling on the roof. The ring was still in his pocket. He’d planned to ask Donna to marry him Saturday night but at dinner they’d talked about nothing but the birds. He was sure it would seem like an omen to Donna. He wasn’t the superstitious type, but he wondered whether it was an omen himself. It felt like time to take the next step, but was he ready? He’d always liked petite dark-haired women and Donna was special. They really hit it off. The twinges in his lower back reminded him that he wasn’t getting any younger. But was he ready for kids, the hubbub of family life, the expense? His older brother didn’t seem so happy. He had a fund of lame jokes that he told when he was drunk. The latest: “What’s the difference between a wife and a girlfriend? About 45 pounds.” Sean ducked as his umbrella caught on a low-hanging branch.

It had been raining dead birds for four days. Donna winced as she heard the tiny bones crunch when she stepped on yet another corpse. The bird’s eyes were glazed over, its black feathers still shiny. She’d always thought the blackbirds were beautiful—the startling glimpse of red and yellow on their wings as they darted among the trees in her back yard. Now they littered the streets and sidewalks and yards in soft heaps. She’d never seen so many. She’d never seen birds so dead. Milltown had made the national newspapers. The local news on TV featured interviews with scientists, psychics, pastors, but none of the explanations seemed plausible. Atmospheric disturbances and lightning high in the sky.  The souls of the dead returning. The wages of sin. Would God really send a deluge of dead birds to remind her? At first, she hadn’t planned to tell Sean about Jonathan at all, but then she’d decided a lie of omission might be as bad as a lie. Even though she and Jonathan hadn’t actually slept together, it had been pretty intense. He was married, she’d been seeing Sean, they’d been having these long, soulful conversations alone in the break room at work. The sexual tension had been rising. It was Jonathan who’d called it off. She didn’t know whether she would have. She couldn’t tell Sean, just couldn’t, but what if he found out later? She still worked with Jonathan and Sean was bound to run into him. Would he be able to tell? She’d almost said something on Saturday at dinner, but Sean seemed distracted. He’d complained about his back, and how between the birds and his bad back he wasn’t getting in any golf.

It had been raining birds for six days. The corpses at the bottom of the piles had stiffened and begun to decay. They were starting to smell, and had attracted armies of ants. The city had declared a public health hazard and state of emergency. Mail delivery was suspended. Most businesses were closed. Residents were advised to stay indoors. Sean could have stayed with Donna. Donna could have stayed with Sean. Both had decided against it. Both felt the weight of the unspoken as they watched the steady rain of dead birds outside their windows, and listened to the muffled thuds on their roofs. So beautiful. So dead.

Jacqueline Doyle’s award-winning chapbook, The Missing Girl, was published by Black Lawrence Press. She has recent flash in Little Fiction/Big Truths, Juked, and The Collagist, and flash forthcoming in Passages North, CRAFT, and The Minnesota Review. She lives in the San Francisco Bay Area and can be found online at www.jacquelinedoyle.com and on twitter at @doylejacq.