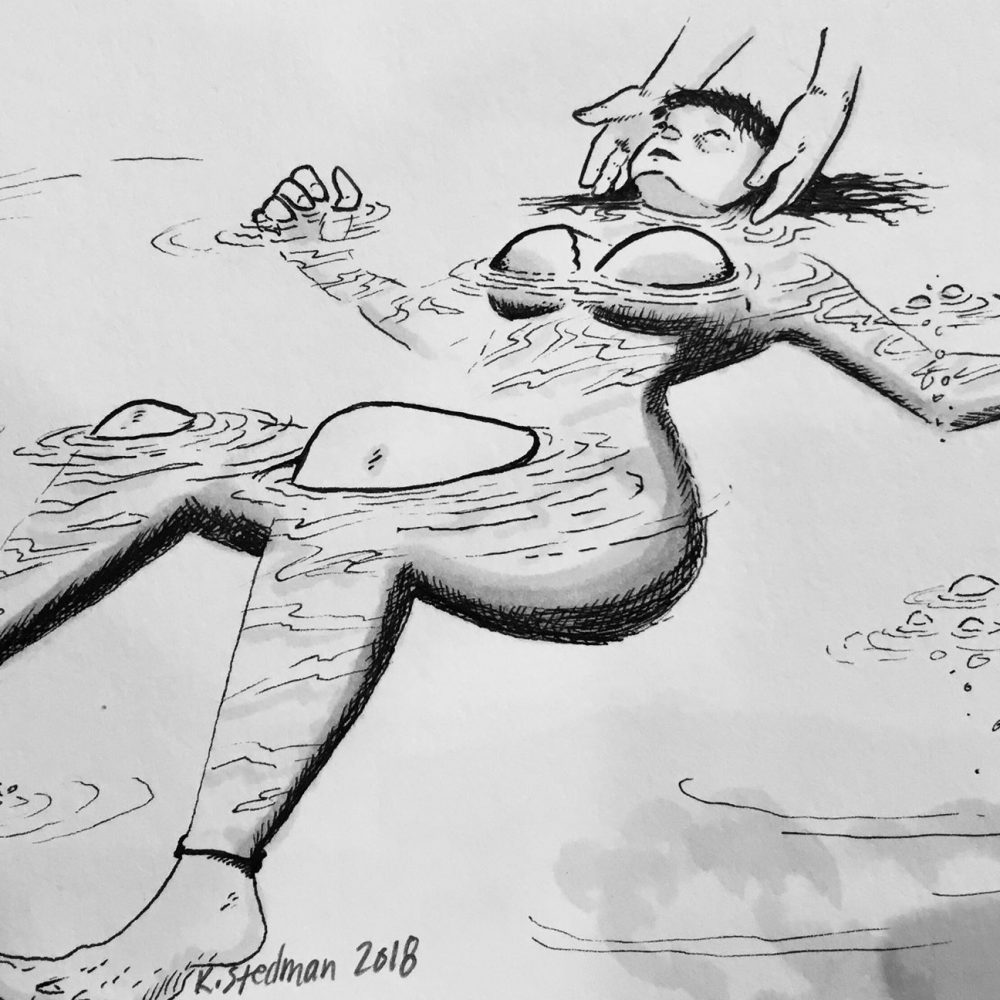 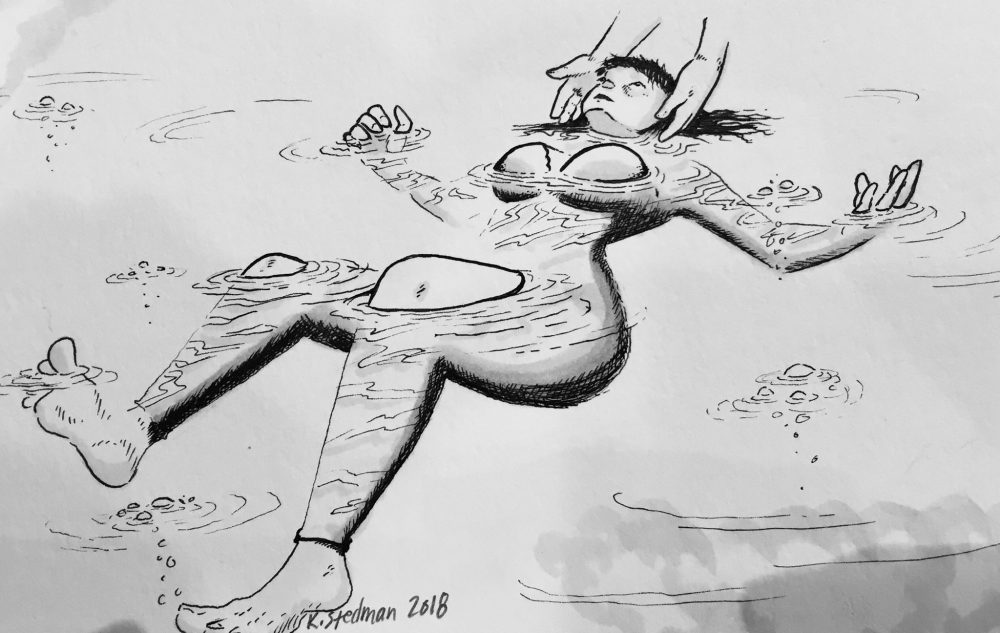 They slept on couches, park benches, a urine-stained recliner on the porch of a hospice in Valdosta, Georgia. Back seats, hatchbacks, haylofts, high school gyms, a treadmill somewhere in Florida. They did it for the band. Nallie once slept strapped to the top of the PunkVan, speeding down I-95 towards Richmond, VA, waking with a voice like a distorted blender but she killed that gig anyway. They did it for the music. Due to the nature and environmental hazards of where they slept, a variety of medical conditions occurred, including eczema, contact dermatitis, respiratory infections, and (as they entered their 30s), neck strain, herniated discs, sciatica. Bald Goran slept with Neeko, Neeko slept with Miriam, Miriam slept with a teenage fan in Lancaster, California, and didn’t remember until being informed by Nallie, who slept with the fan’s sister, with Bald Goran, with Neeko, with anyone who desired her. They did it for the fans.

Somewhere in Florida, Nallie slept with Mariangelica, a stocky 14-year old Cuban with scars on her wrists and blocky shoes. Nallie woke up alone on a treadmill in the apartment complex’s gym, marker on the cracked linoleum reading “BUILDING 13, APT D. DONT KNOCK-M.” She clasped her head and wandered out into the sunlight. Wearing a Lookout! Records T-shirt and black tights with unlaced Vans, she wandered through the apartment complex looking for the band. There were polluted lakes, splinted sidewalks, overflowing dumpsters.

When she walked into Apartment D, an older chicana, who’d been sitting on a recliner as if it were a throne, hands flush with the chair arms, erupted from the chair and shook Nallie by the arms.

“You were the one with my Mariangelica last night?”

Nallie nodded, preparing for an assault.

“And you are the leader of the band?”

“I write the lyrics and sing,” Nallie admitted.

“Then I owe you all my gratitude. I am Miss Maribella, Mariangelica’s abuela.” She hugged Nallie. “You saved my Mariangelica’s life, you are an angel sent to us.”

Nallie had never been called an angel, unless you counted being tucked in by her real mom as a little girl.

“Oh, they”—her voice lowered to a whisper— “…everyone is fast asleep. You are all such nice young people.”

“I’ve never heard that before,” Nallie murmured. The apartment was filled with paintings of the Virgin Mary, rosaries, and candles. From the oven, a homey smell wafted across the unit. At the age of 34, Nallie had never used an oven.

The abuela took Nallie by the shoulders again and stood back with a broad smile, as if appraising her. “What you need, young lady, is sunshine. Come to the pool. When we return we can have cake with everyone, for my Mariangelica’s Quincea͠nera.”

She went to the balcony and put blankets, sun tan lotion, and pool noodles into a Walmart bag.

Nallie took a few steps towards the bedroom, locating the canvas knapsack containing their pills and syringes, the lighters and blades wrapped in socks. She was beginning to feel panicky, something like circuitry spasms in her brain, twitching in her extremities, the first elements of withdrawal.

“I didn’t know it was her birthday,” Nallie whispered. She racked her brain for ways to get the knapsack without the old woman noticing. She didn’t like other people knowing what she was up to, a trait that affected her attempts at sustained intimacy and actual adult life.

“She doesn’t celebrate birthdays, but with you all here she will know it is special.” The abuela grabbed her by the arm and pulled her outside, saying “Come, come.”

“It has been a very rough year for my Mariangelica,” the abuela sighed. Her and Nallie reclined on brown plastic pool chairs, Nallie trying to relax but the harder she tried the more her breath caught, the more her feet fidgeted. Cigarette butts on the bricks surrounding the pool and beer cans in the bushes under the grey palm trees. The “Pool Rules” sign had been vandalized with pictures of penises and the clock above it showed the wrong time.

“My Mariangelica was diagnosed with scoliosis. Do you know this?”

“For this the kids at school bullied her, and she fell into a depression. She slept for many weeks, but then she started to learn your music on the guitar, and write her own lyrics like yours, and she is better now. Because of you.”

The abuela reached out and squeezed Nallie’s hand. “Oh, you are so hot! Let’s go take a swim.”

They waded into the water, the abuela performing complex geometries with her noodle, Nallie removing her T-shirt. The chlorine smell and sun on her limbs recalled a distant, forgotten memory of ice cream sandwiches and water balloon fights at Nickel Mines pool with her real family, when she was like six. She hadn’t seen them in over 20 years.

The abuela swooshed over and took Nallie by the shoulder and hip, rotating her gently onto her back. She cooed into Nallie’s ear, “You float now. Keep your chin up. It is such a beautiful sky, the clouds in Florida. Think of the angels in the sky, and think too of the angels all around us, in the swamps, in the subways, in the prisons, dealing drugs on the back streets. We need angels down here as much as up there. And you are such an angel.” Nallie felt her body pushed through the water as she inhaled deeply, recalling family afternoons in her The Little Mermaid swimsuit, her real mom bobbing her up and down in the shallow end, cooing “Wheeeeee! Wheeeee!”

James McAdams has published fiction in decomP, Superstition Review, Amazon/Day One, Literary Orphans, and B.O.A.A.T. Journal, among others, while presently shopping a collection of short stories and working on a novel about the Florida opioid epidemic. One of his works was nominated for a Pushcart 2019 by The Matador Review. Currently, he is a Visiting Assistant Professor of English at the University of South Florida. His work can be viewed at jamesmcadams.net.