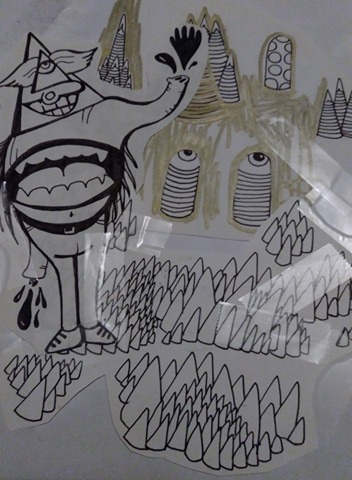 There’s  this  park in Minnesota where people ride their bikes and people have picnics and kids go on field trips to this old army fort, but it’s actually the site of this horrific internment camp for Indians, and no one seems to notice or care. I heard that Lincoln, or whoever was president, had to do something because Minnesota passed some law that white people could just kill Indians for a bounty. So, people were bringing in wagons full of dead bodies, or sometimes just a bunch of scalps, men, women, old people, it was total mayhem. You’re probably wondering how many Indians were killed but  you know nobody was keeping a tally of how many dead Indians were showing up at city hall or whatever because they didn’t care. They didn’t see them as fellow humans. They saw them as, I don’t know, how do you see something that you believe doesn’t belong? Foreign? Evil? Inanimate? I can’t explain that type of thinking. So we’ll never know how many. But a lot. Too many. So, Lincoln, knowing he couldn’t change the state’s laws because we have some stupid system in the US where states can have a genocidal free for all and that’s somehow okay,  so Abe made this fort, Fort Snelling, into a refuge for these Indians. This was like some Schindler’s List shit. Anyway, they put these Indians into the Fort and said, ‘Hey we’re the federal government and we aren’t going to allow this to happen so back off’, because Fort Snelling was federal land or something. So, all these Indians are locked in this fort and they’re safe but basically imprisoned, and it’s not exactly the Ritz, and the federal government isn’t exactly putting their best guys on the job. I mean, I think Abe didn’t want them all murdered but he wasn’t exactly rolling out the red carpet. Quite the opposite I would say.  So, these Indians spend all summer and fall in this Fort, cramped together, meanwhile outside their friends and family are being murdered indiscriminately, and it just never ends. I imagine when you’re in that situation, the situation of people killing other people that are like you without thought or remorse, and at some point you have to think to yourself, ‘They’ll stop killing us eventually, won’t they?’ and the answer is always no. If I’ve learned anything from history, it’s that the answer is a resounding no. Well, then along comes winter and they’re in this horrible, decrepit Fort, huddled together and eating maggot infested mush. And if you’ve never spent a winter in Minnesota, and I’m not talking about  a twelve hour layover, I’m talking lived it, man, then I think it’s impossible to empathize what they were going through. Some died from exposure and some died of starvation, but what really took them out was disease. One by one, the germs spread through there like wildfire on dry kindling. No one tried to fix it. No one called a doctor. Over three hundred people died there. It was a concentration camp, there’s no way around that. They were brought there to die, behind closed doors where no one would complain or know and it could all be passed off as some mistake or tragedy or some other manufactured lie. And you know what? I’ve ridden my bike around that Fort and thought, ‘Wow, what a nice park’. My friend Jessica and I smoked a blunt inside that place,  pretended to fire the stupid replica cannons, and played with the butter churner. Didn’t think twice about it. There’s Moms pushing their kids in strollers and kids playing tag in the grass. I actually saw some people LARPing. You know, the people who dress up like knights but with football gear. They look like a walking medieval bouncy castle with all the pads on. They were LARPing on a concentration camp. Just let that settle in there for a second. But my point isn’t that we should be outraged by the desecration of what should be hallowed ground, because we should be, it’s just not my point. The reason I’m telling you about this place is because there was a time when I was feeling so infinitely depressed about myself and thinking,  ‘This is it. This is who I am. This is what I’ve become.’ and for a second I thought about ending it all, but not in a serious way, and not for very long, but still, to feel like you want to end your own life is perplexing and horrifying.  I felt like I was faced with an immovable barrier and my only way around it was my own death. Everything felt pre-ordained, you know? The past just wouldn’t go away. It seeped into my veins and coalesced in my soul until it became part of me. But then I was walking through this park with the Fort, knowing the history and all, and I looked around at a group of kids, second graders or something close to that, and they were so psyched to there because they had no idea what atrocities went down, and I just had this wave of reassurance. The universe just opened up for a second and I was enlightened with this realization that nothing is sacred and nothing is permanent. Reality is a kaleidoscope and time keeps twisting the viewfinder. I can create my own reality and the past will not dictate my future. If that death camp can reinvent itself, then why can’t I? My soul used to feel like an old dress in an attic closet being slowly being eaten by moths but now it feels new and clean. I hope that one day kids will play on me and runners will jog by and the grass will grow and the sun will shine and no one will ever suspect anything was ever wrong.

S. R. Schulz is a physician living in Portland, Oregon. His work can be found at Maudlin House, Litro, Pidgeonholes, Minnesota Medicine, tNY.Press and others. He sometimes writes book reviews at http://srschulzwriting.com/ and tweets really cool and never dull and super interesting things at @SRschulzwriting.