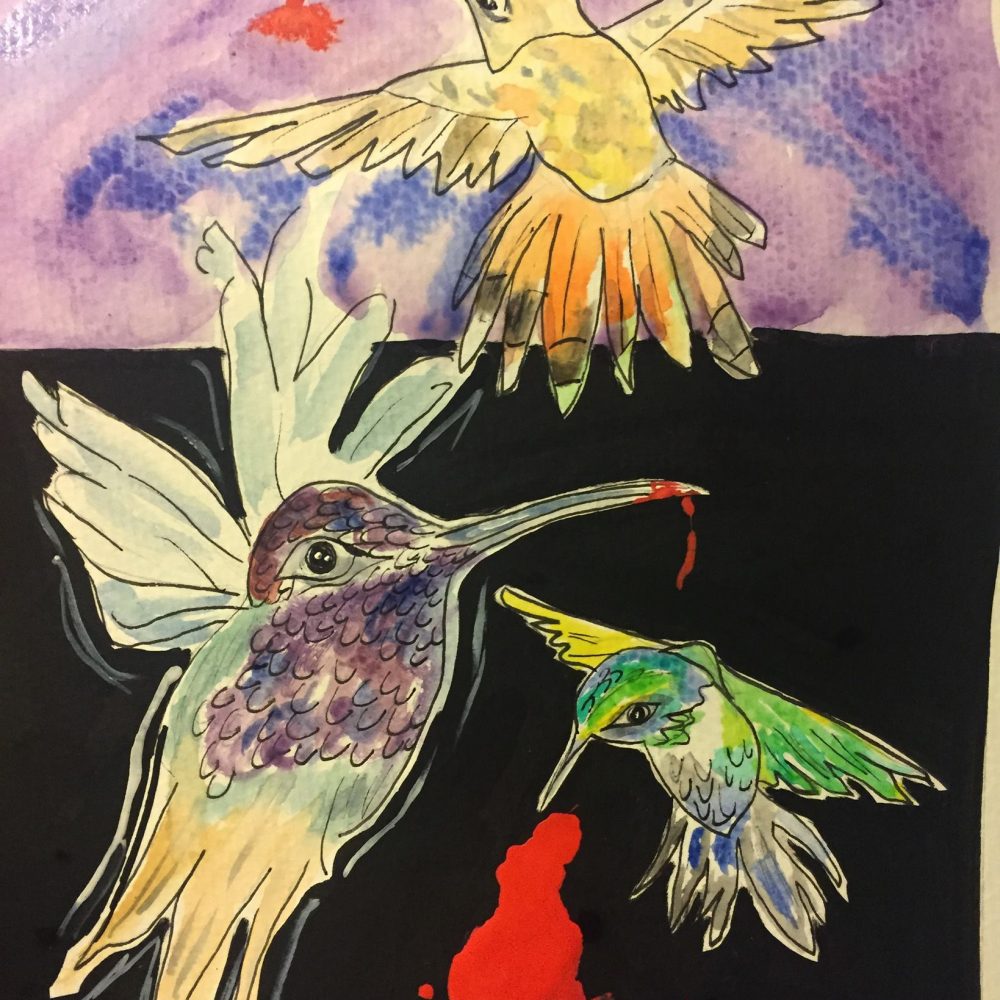 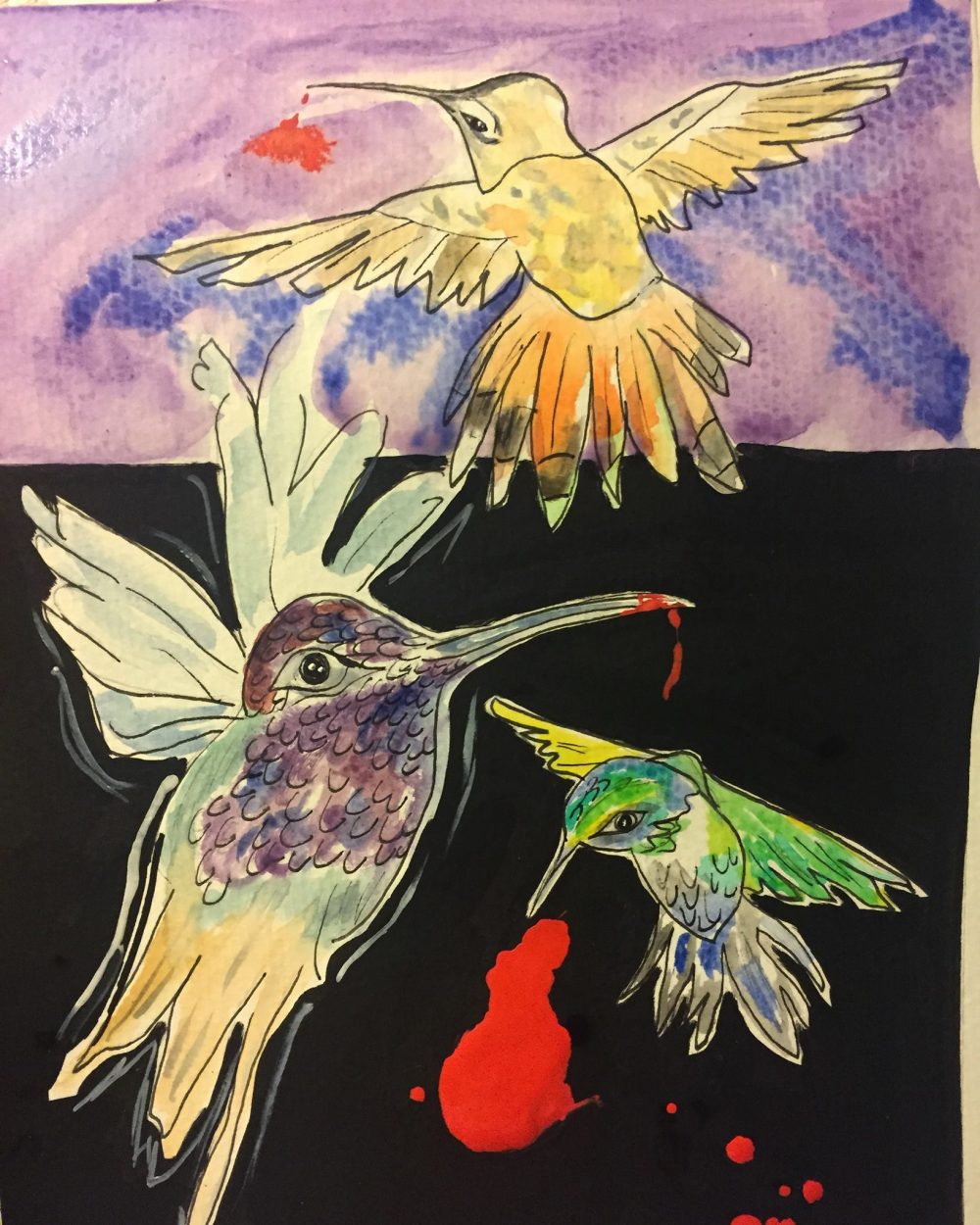 It began in Tina Ludden’s garden. You wouldn’t just guess that because Tina Ludden was widely known to favor all things organic. She had a butterfly garden and she had a vegetable garden and she’d never use Miracle Grow, only compost, and her gardens, both of them, were known to be among the best on the block. She held the record for the most Bright Spot awards.

And then that new guy moved in. Henry Tuttle. Of course he’d have a name like that. Three bedroom house and just him in it. He planted a butterfly garden too, and it was nice, but it wasn’t like Tina’s. In the beginning, she even gave him some pointers. We all lived to regret that.

Well, not that specifically. It was the damn bird feeders. Not the feeders for finches and cardinals. The hummingbird feeders.

Mr. Tuttle had a knack. His butterfly garden might not have been as nice as Tina’s but oh, did the hummingbirds throng to his yard. He had eleven feeders at the beginning, when he and Tina were still friendly. Eleven! And he had to fill them daily. Sometimes twice daily. In fact, as he carried the filled feeders to their perches in the butterfly garden, he was often swarmed by hummingbirds. The Weekly Star did a story on it. Front page.

Tina put out some hummingbird feeders too. She had three. And she only needed to refill hers once, maybe twice a week. It was weird, we all agreed, that here Mr. Tuttle had all those hummingbirds and Tina had so few. It didn’t seem fair. Tina hated to ask so she hinted and was coy and complimented Mr. Tuttle’s feeders until he, remembering (because she reminded him) that she had helped with his butterfly garden, gave her his secret. He mixed his own hummingbird food, not relying on that commercial stuff. And, Mr. Tuttle confessed, he increased the sugar content. He doubled it in fact, to a ratio of 1-2 rather than 1-4 as recommended. The hummingbirds loved it.

Well if that’s all there is to it, Tina thought. And she made a hummingbird food that was 3-4 ratio and she colored it and flavored it with grenadine. There was nothing to suggest too much sugar was bad for hummingbirds, she knew that from an online search. Maybe they’d fly a little faster, she thought.

But that was only part of what happened, as we all know now. The increased sugar, or maybe it was the grenadine, made them fly faster, sure. And they grew bigger. And more aggressive. Mr. Tuttle had a video of himself swarmed by so many hummers he appeared to have sprouted wings himself, and it went viral. And then Tina had one that put his to shame. The neighbors got in on it too, especially Sally Musgrove, but her videos never took off like the Tuttle and Luddon videos.

The hummingbirds were big as blue jays by July 1 and by August, hummingbirds the size of hawks were not uncommon. National Geographic came and the Discovery channel.

It’s hard to say who first got the idea of putting blood in the feeders. Or if anyone did. Maybe the hummers got a taste for it all on their own. You couldn’t put your cat or dog outside. And you didn’t dare not feed them, those bloodthirsty hummingbirds the size of eagles now, or they’d attack you as you got into your car in the morning.

All those thrumming wings kept up a near steady breeze in the neighborhood and the noise was constant, even at night. Some of the hummingbirds had become nocturnal.

Scientists came, conducted interviews, captured samples, most of which they released with tags on their legs. A few of the scientists thought it was the next step in evolution; some said it was tampering with a protected species and any of us with a feeder should be prosecuted.

It’s rumored the military was interested in our big hummers, too.

And just when it was becoming unbearable, the hummingbirds were gone. Migrated, we assumed.

The last one seen in the area was a young one, only big as an owl, caught on heavy twine hooked onto its leg tag. It was nearly worn out, but still thrumming the air with its iridescent wings. Sally Musgrove’s teenage girl was on the other end of the string, lying on the stone wall in the park, the twine wound around her wrist, her arm moving up and down as the bird tried to escape. Her lips were red from lipstick and the rest of her, at least what was visible, was white as snow. Bloodless.

Someone shot the hummer and its taxidermied body is in the library. It’s on some list of curious oddities and people from other states stop by to see it.

It’s getting to be spring again now and if our hummingbirds are returning, they are late.

Mr. Tuttle has moved away. Tina Ludden knits caps for newborns now and her garden is gone.

No one knows to this day what Sally Musgrove’s daughter was doing with that hummingbird the size of an owl on a leash. I’ll never forget how she looked, lying there so still with her hair moving in the draft of beating wings.

The kids say they see her sometimes, standing by the wall, silent and white, her hair moving in a breeze that isn’t there. Some say ghost, some say vampire. Kids. They’ll come up with any kind of story. There’s no such thing as ghosts and vampires. And if there were, things like that don’t happen in this town.