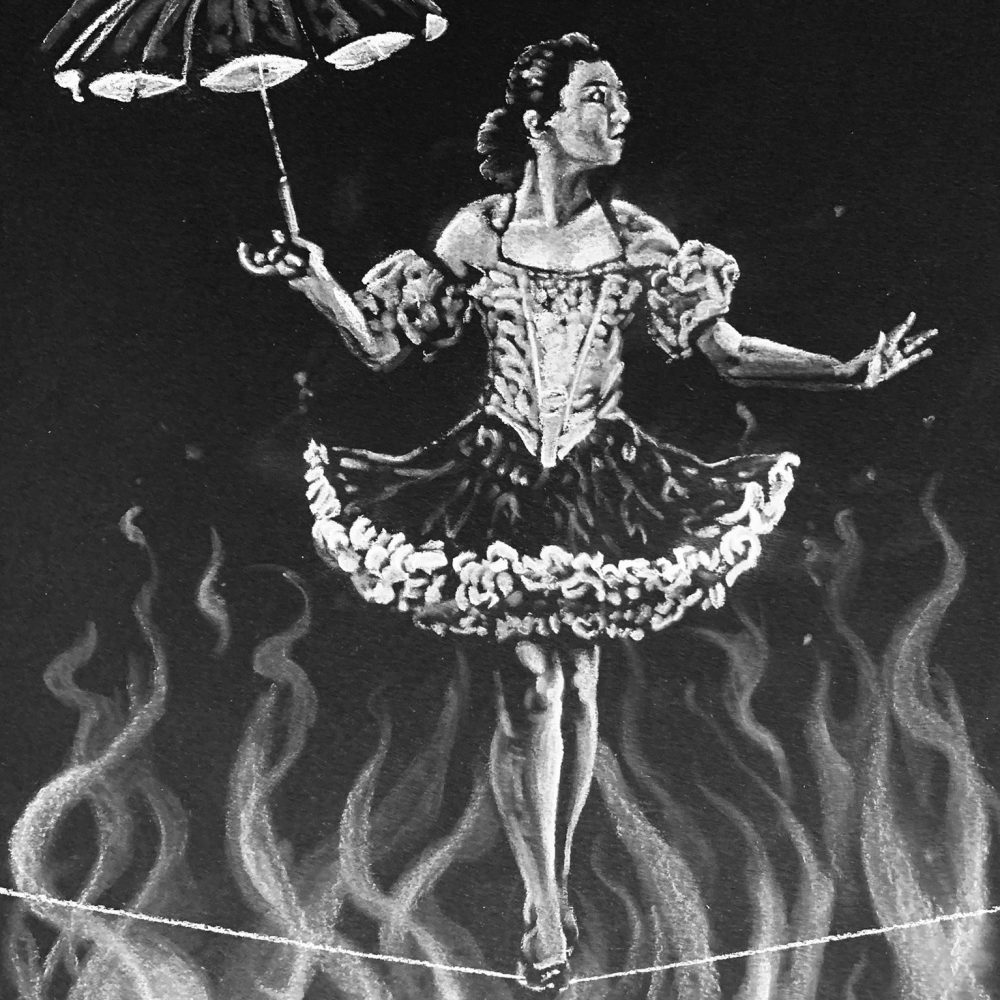 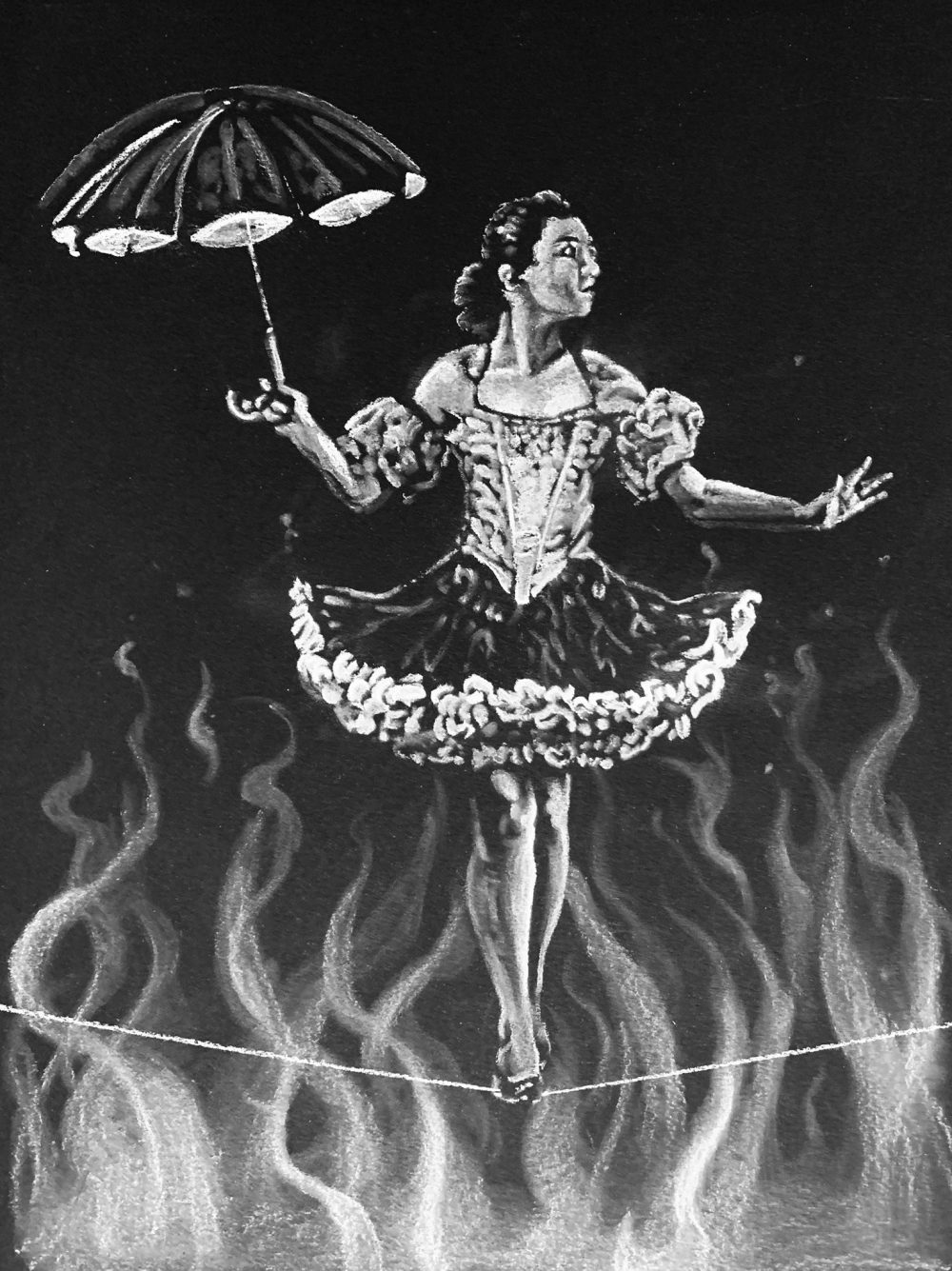 Under the big top the tightrope act is introduced, and he knows the show is almost over. In an hour he’ll be drunk, shoveling elephant shit and carcass scraps that the big cats leave behind. The smells cling to him: days-old sewage, bodies that haven’t showered in a week, the singed wick of the fire breather’s tools. The stench is comforting in a way, because it is familiar, constant. Elephant shit means he’s getting paid. Getting paid means he’s getting drunk.

He leans. The fabric of the big top resists, holds him almost upright. Tonight he smells something else under the usual circus funk, something that cuts through his whisky buzz and makes him restless. Gasoline. He drops his cigarette and stumbles to the tent mouth to watch the finale.

This is probably the worst band he has ever conducted. The trumpets are late and sharp. After the show they’ll blame it on the summer heat. The entire woodwind section is dwarfed by two sousaphones, and the sousaphones spend half the night fucking with the trombonists. Ten more shows and he can leave. Ten more shows, and he’ll have enough money to take his girl to Chicago and try out for the orchestra. He doubts their trumpets ever miss a cue.

Glancing over his shoulder, across the sea of guests and wild animals and performers, he sees something that turns his legs to jelly. He signals for the music they play only in emergencies. The Sousa song builds slowly as the band realizes what’s happening. Behind him the noise of the crowd rises as the entrance to the big top fills with smoke.

Deep breath in. Tight Core. Steady legs. She glides her feet along the tightrope, toe-to-heel, toe-to-heel. Her arms flex against the weight of the balancing pole. She is aware of her surroundings in the way a fish is aware of its brook. The babbling crowd below gasps as her right foot slides forward and she falls into a full split. Deep breath in. Toes pointed. She makes a million imperceptible movements and prepares to stand when the band starts to play the last song she wants to hear while 100 feet in the air.

On the platform fifty feet ahead of her is her father. He motions to the entrance, where a small patch of flames licks its way up a panel of the tent. Her father climbs down the ladder, leaving her alone on the tightrope. There is no net.

A clown is useless in most situations, but never more useless than in the midst of pandemonium. He knows this, and so he runs.

The tiger circles the edge of its cage, low to the ground, afraid. The tiger hears fire, smells death. The ringleader plays this off as just part of the routine, folks, and tries to hide the nerves that make his voice waver. Smoke finds its way up the tiger’s flared nostrils, tendrils winding into his lungs, choking him. He bolts toward the long tunnel they brought him in through, back to the train car. The crowd laughs at him, this massive beast suddenly and inexplicably hunkered and weak. At the end of the tunnel a gate blocks the exit. The tiger sees the train car ahead of him, smells the danger behind him. He has never felt more trapped.

The sword swallower and the bearded lady (who really doesn’t mind the beard thanks for asking) stand next to the sideshow tent watching the fire. For a moment, the bearded lady considers offering help however she can. Then she remembers the woman who called her a freak and tugged on her beard so hard she clacked her teeth. She remembers the man who groped her and how the crowd laughed at him, at her. She decides the world would be better off without them. The sword swallower wraps an arm around her waist and offers his flask, the most romance he will ever show her outside their shared train car.

The clown runs out from behind the big top. As he runs, the toes of his bloated shoes pull up patches of grass and dust. He passes the bearded lady and the sword swallower and cackles. When he makes it to the street, he does not stop.

The woman watches the big top burn, enthralled. Her child clings to her dress, screaming. Tiny stars of fire poke holes in the canopy, blooming into swaths of dark smoke and blazing light. People leap over seats and stampede toward the only exit not yet engulfed. The captivated woman does not notice when her child is torn from her. She barely feels the weight of the bodies against her as she is pushed to the ground, her head smacking the concrete hard. The last thing she sees, staring up through the crushing hoard of bodies, is the sky in flames. It is the most beautiful thing.

Shaemus Spencer is an animator and writer. A native of Flint, Michigan, they live and work in Rochester, New York. Their work is forthcoming in MoonPark Review. This is their first publication. Find them online @chezmouse.