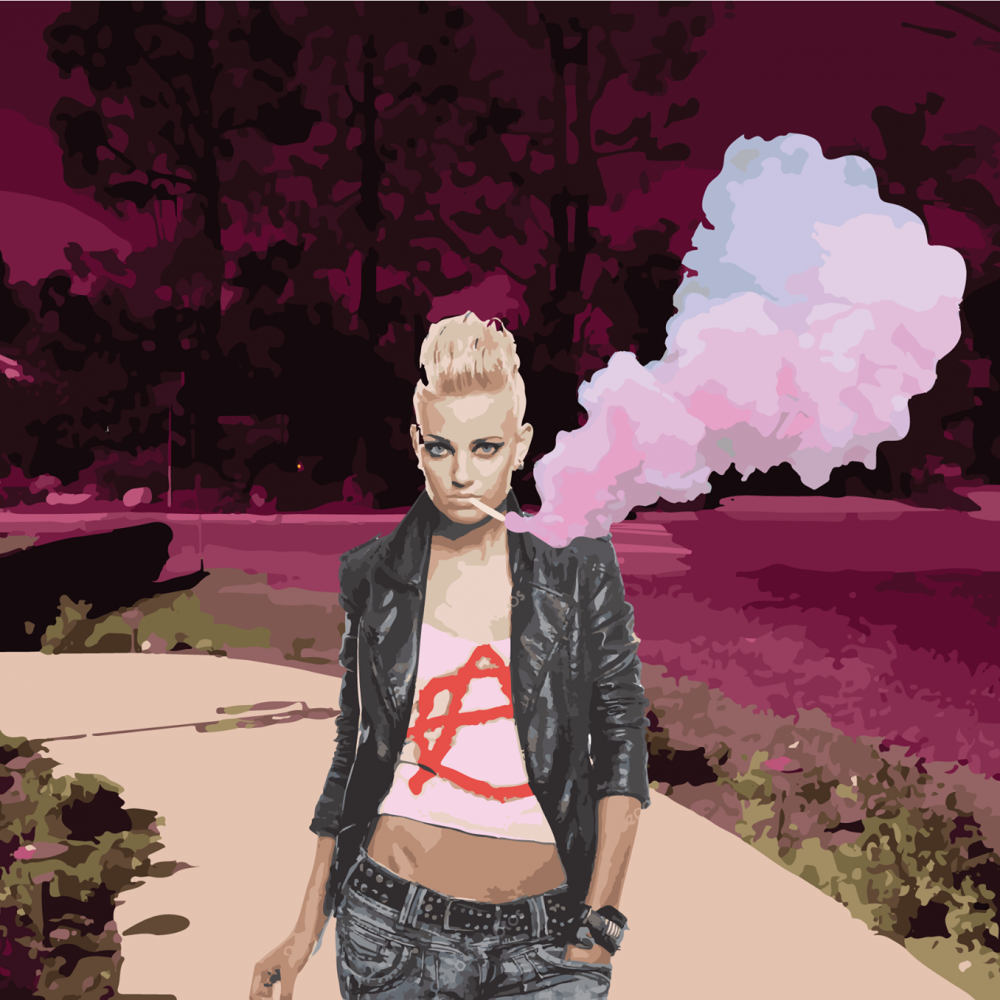 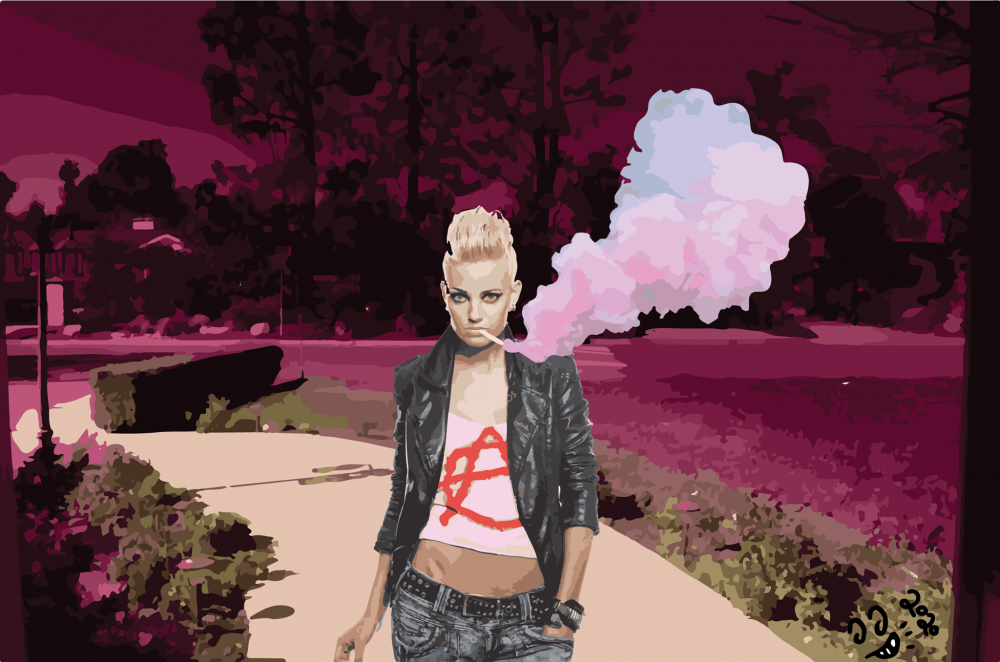 Jade dug around in and tossed aside items from the pile of stuff she kept on the vanity we’d purchased for the bedroom when she moved in.

I followed her to the front door and watched the words etched on her shoulder bounce away through the tight binds of the screen door– life is meant for living.

His name was Raif and he lived in the Czech Republic. I’d been aware of him. Known the name Josh didn’t compare to Raif. Nothing exotic about Josh. Nothing life changing about a future with Josh. Raif sails you to Grecian islands. Raif waves his hand and gets you across the Croatian border. Raif declares Medellin a “hidden gem.”

I wandered onto the porch as she climbed in an Uber. The grey sedan bounced away on the cracked New Orleans street, turned right at the corner and vanished. There was no breeze. The sky was peppered by tufts of thin clouds that resembled couch pillow innards torn out.

I remember one conversation vividly. Jade and I at the Carousel Bar in The Hotel Monteleone, revolving slowly.

“Some people have that one person, who… no matter what, they would leave any relationship to be with them,” I said.

“They’re always out there… and no matter how hard the other person tries… it’s just spinning the wheel.”

Jade lifted the glass to her lips.

Jade got the bartender’s attention. A hunk in a shirt two sizes too small.

“Is there alcohol in this?”

Jade held his gaze and he reciprocated. It was oddly flirtatious until he lumbered away.

“It’s boring when you act so insecure.”

She went outside. The bar slowly rotated until I saw her through the window, smoking beside a potted evergreen. An empty pedicab zipped by. Gaslights burnt above doorways. French Quarter characters passed and crossed streets. A city romanticized through a window. And there she was on her phone.

I met Jade one night when I couldn’t get in a Bywater club because my ID had been washed so many times my face looked scratched out. The door people around town were dicks who cared about their jobs.

That night it had been a young woman with short black hair, tattoos crawling down her arms, and a great smile, who seemed delighted to send me away. I gave her some choice words and went outside.

Jade stood by the door with one leg up against the wall. Her pale white skin bordered on translucent under the dull glow of the club’s sign. She wore a red dress and had red hair. Her fingernails appeared painted with white-out. In retrospect, she spent more time than anyone I’ve known acting like she was posing for an imaginary photo.

“They wouldn’t let me inside. How was it?”

“Why wouldn’t they let you in?”

“Must have thought I was dangerous… maybe even a menace.”

We stood awkward in heavy silence. I gazed at St. Claude bathed kindly in streetlights; hipsters relocated from Brooklyn stumbled and swaggered across the neutral ground.

“Want to come to my house for a drink?” I asked.

She watched a tattooed guy with a red mohawk stomp confidently toward the club’s entrance. He gave her the eye. She stared passed him off in the distance.

More than once I woke up to Jade sitting on the porch at dawn laughing at the sunrise.

“Jesus, the things people get excited about.”

Occasionally the laughter bled into crying then she’d want to have sex.

At night we’d lie in darkness and listen to records. Alt-J and Neutral Milk Hotel, mostly. To this day I can’t stomach Jeff Mangum’s voice. There exists nothing more self-indulgent and meaningless in this world than In the Aeroplane Over the Sea. No one has been more responsible for young women leaving on a whim for Europe in the last two decades to find their Raifs than Jeff Mangum.

I didn’t have to investigate far into Jade’s Instagram history to find the Raif weeks. Early 2018. Her European backpacking adventure; her lone trip outside the states; which she infuriatingly brought up any chance she could; the trip she didn’t want to return from, crying on the phone with her parents, them coaxing her home. The first twenty something in history to do that.

With Jade galivanting around Europe, I had time on my hands. I drank heavily and kept unusual hours. I didn’t think about her for two weeks. Half past noon on a Tuesday, three beers and two shots in, I decided to unblock her Instagram.

There it was, the last two weeks meticulously documented. A photo outside the Prague airport, Jade’s arms around Raif’s waist, white 3-D letters spelling Praha in the background. A sunset on the Charles Bridge; The Prague Castle silhouetted behind them. Raif always in sweat-suits owning the look of preposterous Euro-trash. Blurry photos through the windows of moving trains filtered with X-Pro II. A Gondola ride in Venice. The cathedral. The birds. Smoking a joint on a bike in Amsterdam. Posing in front of Matterhorn. Sunbathing in San Sebastian. A dozen Pintxos photos; not even good ones, the garbage that warms on the bar. A selfie on an overnight train to Lisbon. Flashing a peace sign at JFK? #welearnfrommistakes. Back at Louis Armstrong. #happytobehome. Time-stamped one hour ago.

I knew before I saw her rising into view through the tight binds of the screen door, trailing puffs of smoke, that I would open it and let her right back in.

Wilson Koewing is a writer from South Carolina. He received an MFA in creative writing from The University of New Orleans. He lives in Denver, Colorado. His work is published or forthcoming in Pembroke Magazine, Sky Island Journal, X-R-A-Y, Menacing Hedge, Door is a Jar, Tiny Molecules and Five on the Fifth. He was a November 2019 resident of The Vermont Studio Center. He is a fiction reader for The Maine Review and Craft Literary.