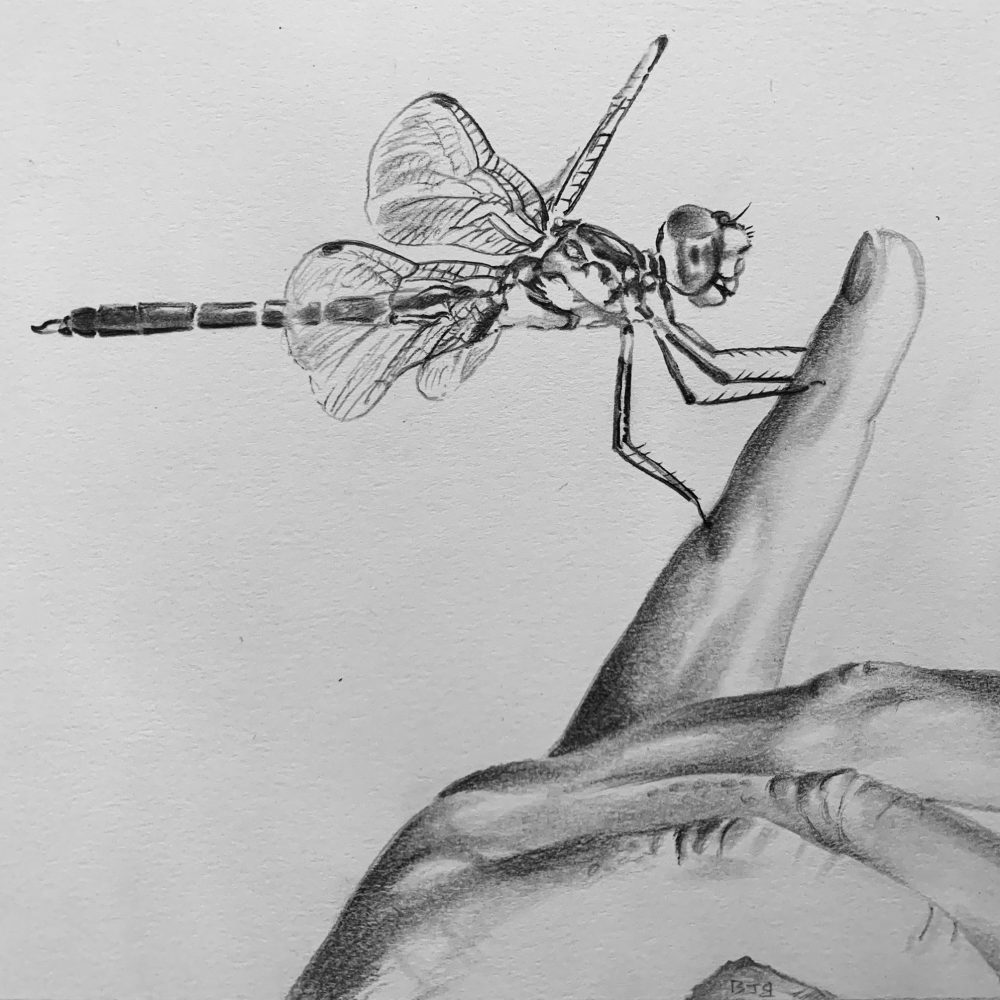 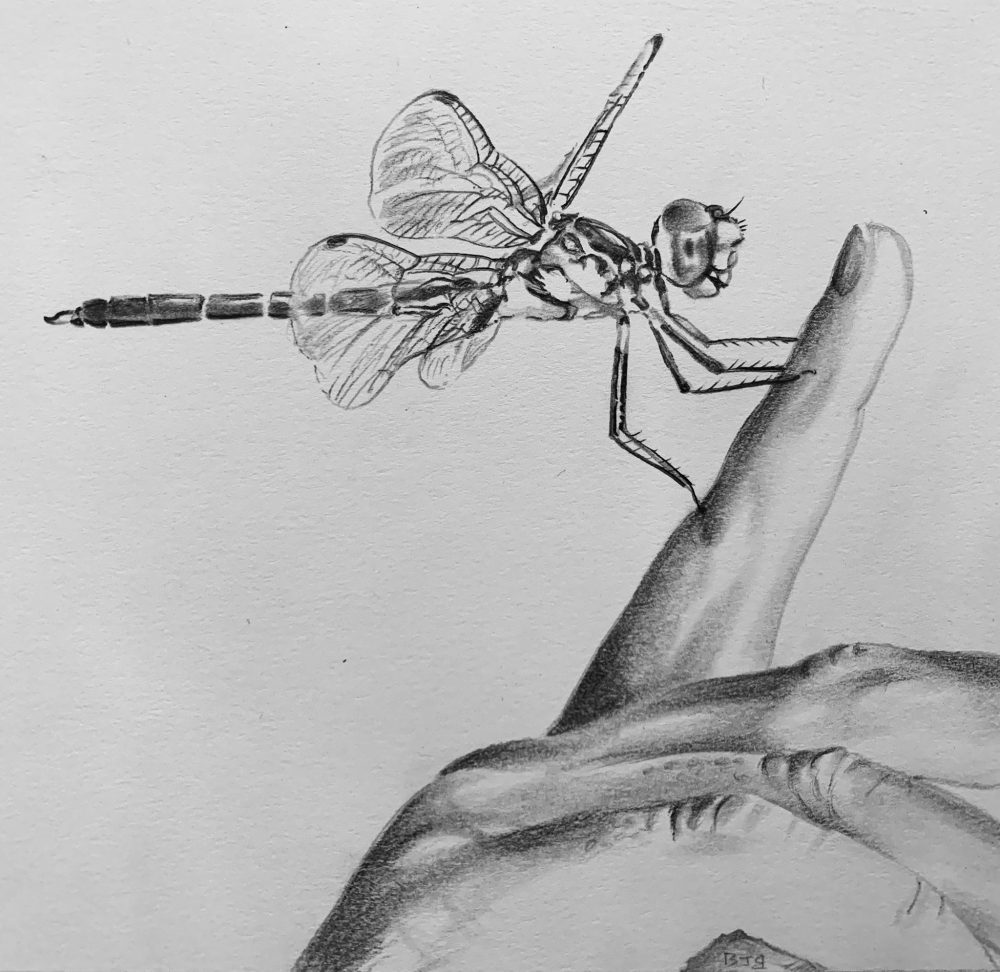 In those years, their meeting place was a clearing in the woods behind their neighborhood. A house had stood in the clearing once, but all that was left now was the brick fireplace and a few chunks of foundation poking through the mossy ground. As the three of them lingered into the evenings, the air took on the damp blue smell of twilight in May, after the frost, before the fireflies.

One late afternoon as they sat leaning against the blackened brick, Marian plucked a fiddlehead fern from the ground and unraveled it, then let it curl around her finger like a monkey’s tail. Her movement disturbed a small cloud of gnats and a single, jewel-bright dragonfly, which flitted out from the brush and hovered near Marian’s head. She swatted at it.

“Don’t,” Lucas said automatically. “It knows how much your soul weighs.”

He looked away under her scowl. “My nana said when a dragonfly flies around your head like that, it’s weighing your soul. Then it goes back and tells the devil what it found out.”

“I don’t believe you.” Marian made a bid to snatch the insect out of the air but it evaded her.

“She’s who your little sister is named after,” Isla said. Her eyes were fixed on the dragonfly as it levitated above Marian’s head. She held out her hand, first finger extended. “Signe.”

Lucas was mesmerized by the glimmer of the dragonfly’s wings as it alighted on Isla’s finger, luminous against the blue shadows. “Yeah. Nana Signe.”

Isla nodded. Lucas couldn’t remember ever telling her that, but it didn’t surprise him that she knew. After a few moments of silent communion with Isla, the dragonfly darted away.

Lucas and Isla were waiting for Marian on the steps of the school. As Marian approached them, Lucas saw the color drain from Isla’s face. She coughed into her hand, hiding a retch.

All three of them had their first two classes together, so it was third period before Lucas could talk to Isla alone. He passed her a note in the back of social studies: What happened this morning with Marian?

He watched her fidget with her pencil for a long time before she finally scribbled something and handed the note back to him. When he unfolded the torn-out notebook page, it read: Couldn’t you smell it?

By then, Lucas knew not to laugh at Isla’s odd questions. He wrote: Smell what?

He stared at her words, then folded up the paper and shoved it into his bag. Isla was watching him but he didn’t look back at her for the rest of class.

By lunch, everyone had heard Jake Ehlerson’s story. Early that morning, he’d discovered a half dozen dead bats pinned to the side of his family’s barn. There were nails shoved through their silken wings. As Jake described the scene, he spread his arms to show how the bats had looked, imitating their crucifixion.

When they met in the burned-out clearing that afternoon, Lucas screwed up his courage and asked Marian if she knew anything about what had happened. She said that she didn’t, and had anybody else even seen the bats, because Jake Ehlerson was a liar and maybe he made the whole thing up. Isla kept her eyes down and said nothing.

The three of them continued to meet at the smoke-darkened chimney after school. At first, Lucas felt a queasiness in the pit of his stomach whenever he was near Marian. But he ignored it, and before long, he found that it had faded away. The notion that she could’ve had anything to do with the incident at the Ehlersons’ barn—or that Isla could somehow know about it—began to seem doubtful, then foolish. He felt embarrassed for considering it, just as he felt embarrassed for having once believed his grandmother’s fairytales.

By the summer before high school, Lucas rarely saw Marian or Isla anymore. There was never a falling-out. They simply found other friends. It always bothered Lucas, afterward, that he’d let time erode their friendship so he wouldn’t have to confront what Isla had told him.

They lost touch. It was years later when Lucas found himself texting Isla, hoping she still had the number he’d gotten at their last high school reunion. He was sending her the local news article about Marian, about what she’d done to her children. They had lived only a few blocks from Lucas and his family. Close enough that he and his wife had heard the police sirens.

Isla called him that night, and Lucas stared at his phone screen until the call rolled over to voicemail. In her message, she was crying. She said she’d known it was coming. She said they’d seen it, both of them. Isla and the dragonfly.

Eleri Denham is a writer of prose, poetry, and screenplays. Her work has appeared or is forthcoming in Clover & White, Little Patuxent Review, and Snapdragon Journal. A Chicago native, Eleri now lives in Oregon with her partner. Find her on Twitter at @eleri_denham.