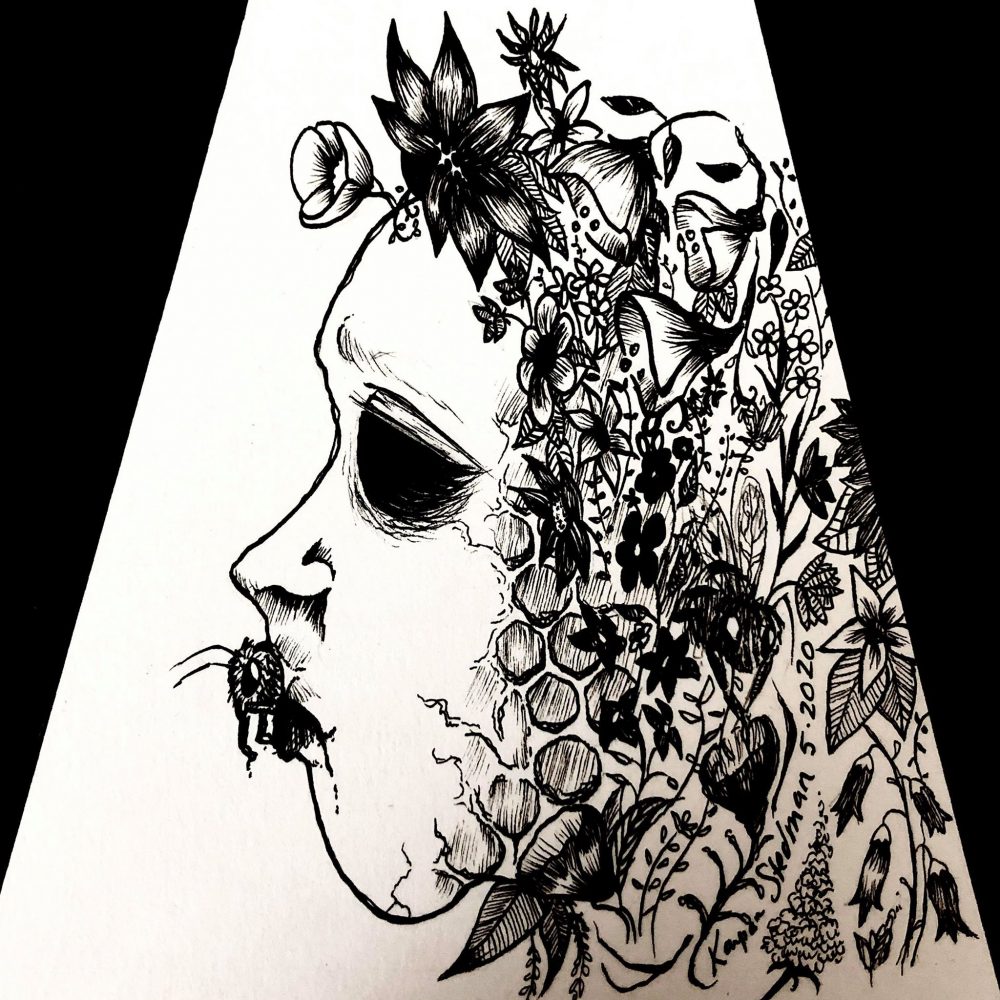 Her body was covered in holes, as if her flesh had been munched on by earthworms. They were spread around her with the symmetry of a machine-made pattern, but sometimes they twisted around the bends of her face and disfigured it. The constant exposure to honey had loosened her skin so much it resembled a damp sponge, and when she flexed her muscles, streams of honey oozed out of her limbs until she retched at the sweetness.

Every few seconds, a bee popped out of one of the holes and circled around her. They popped out unannounced, sometimes emerging from the hole on her upper lip and other times from the hole on her lower arm. Sometimes they sprung from her chest and became entangled with the fabric of her blouse, so they buzzed louder and louder until she freed them.

The woman sat by the edge of a lake, her feet tucked underneath her thighs. It would take only one brush of water against her toes for her body to turn into a tornado of bees, a commotion of buzzing ready to explode. She had hoped for some peace, some time away from the mothers who put a protective arm on their children when she passed by, or from the store owners who refused to allow her tiny little pests inside their stores. The lake was the quietest place she knew.

And yet the bees never stopped working. She could feel the buzzing inside her eyes and inside her breasts, a presto performance on the violin that had decided to live within her in an infinite replay.

Ten or so bees flew out of her and dispersed across the landscape. They were the laborers, searching for nectar to bring inside her body. They worked and worked until the woman’s nostrils dripped with honey, until the sweetness accumulating in her mouth forced out a series of repeated gags. She begged them to take a rest, to let her throat regurgitate the honey until there was nothing left inside her but a sour taste.

But the bees didn’t listen, for they had a duty, and where the woman sat down in despair, a circle of pollinated flowers yielded new seeds.

Karen Gonzalez-Videla is an undergraduate student at the University of South Florida. She’s currently pursuing a degree in Psychology and Creative Writing, and she loves combining these two passions in her fiction. Although she writes about a variety of subjects, she focuses mostly on the immigrant experience and the exploration of one’s womanhood. Her work has been featured in Ghost Parachute, Sidereal Magazine, and other places. You can find her on Twitter at @Gv12Karen.