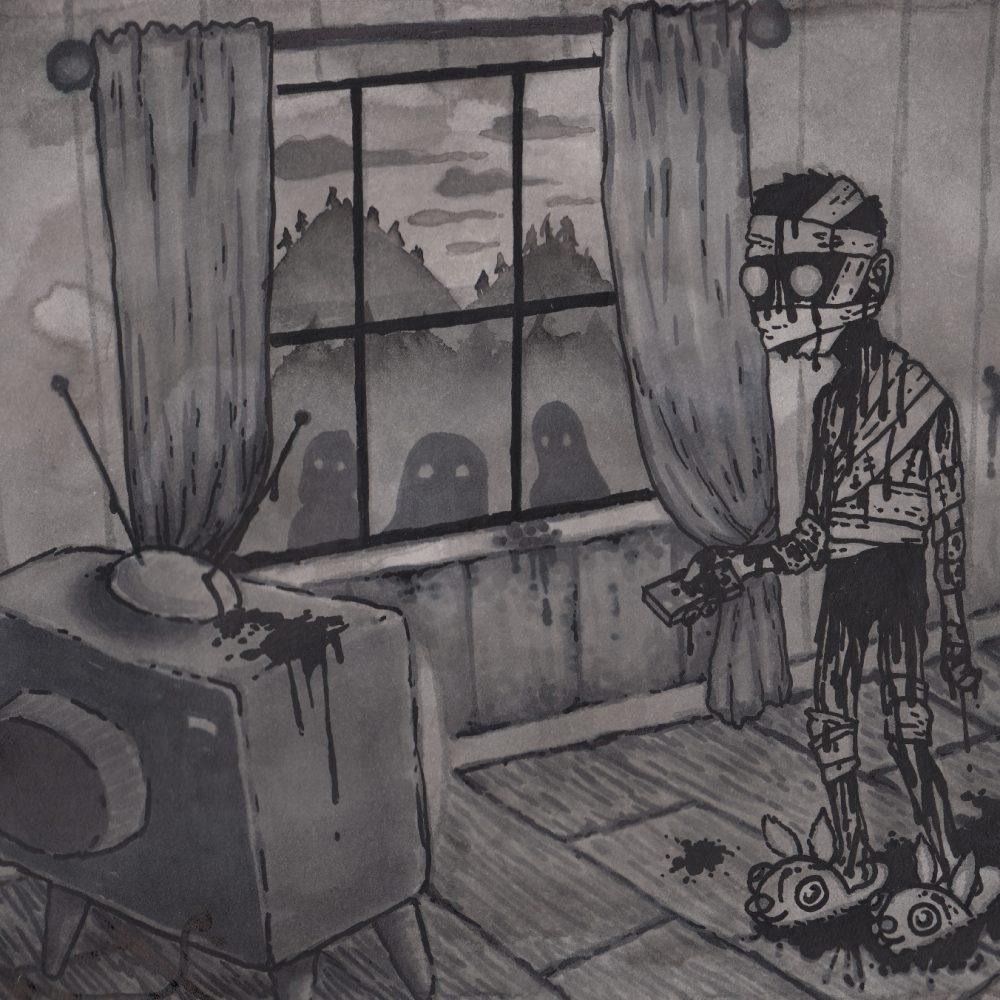 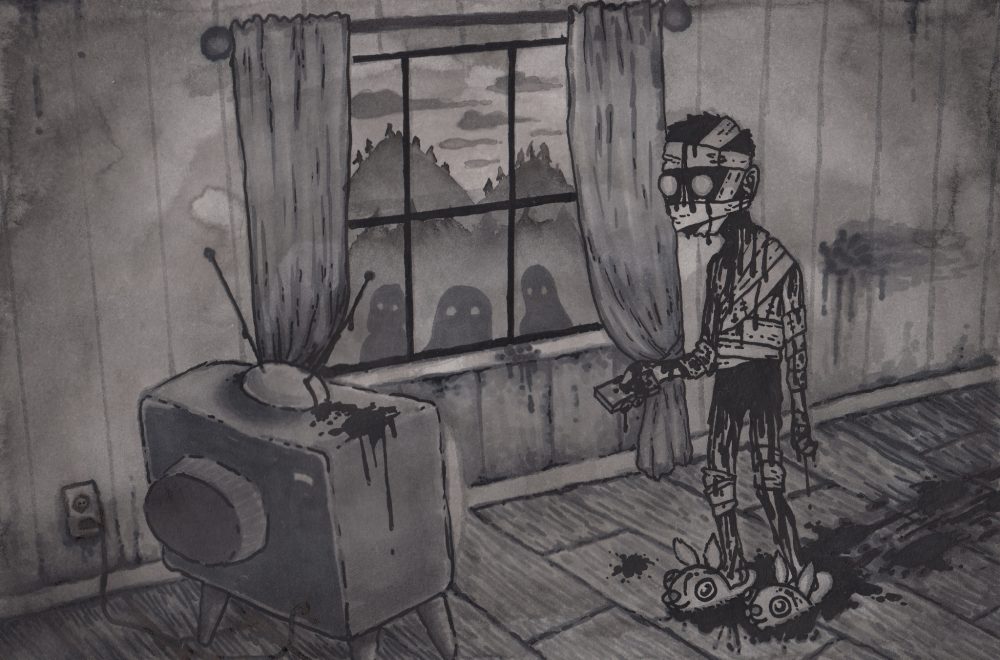 The bleeding still drove him crazy. Every time.

As usual, it had started in the night, and Frederick woke up to the sticky feeling of blood in his bedsheets. He had long ago switched from white linen sheets to a burgundy cotton that could handle the stains, provided he washed them thoroughly every time the blood stopped flowing. A sisyphean cycle, but he rationalized that all laundry was in its way.

“Ugh,” he groaned as he sat upright. There was more blood this morning than the last time, and his arms were stuck to the sheets like candle wax. He shaved his arms sometimes to avoid this very thing, as the dried blood held tight to many of his hairs, ripping them out as he stood.

In pain, Frederick bit hard on his bottom lip. He broke the skin, but a little more blood was a drop in the ocean at this point.

The wounds continued to flow as he turned forty-five degrees and ripped his legs from their own encasements of dried blood. He always kept a pair of his mother’s old house slippers on the floor near the bed for times like these. Half a minute later, the plush material was caked in red, but Frederick knew from experience that he needed them for the traction. The first time this happened, he’d slipped repeatedly in the blood, and received a painful back bruise when he fell.

“Where’d I put…” he looked for the walker his mother had given him, and felt relieved that he’d recently replaced the tennis balls on each of the legs. When too much blood dried on their fuzzy exteriors, he had to scrape them across the floor, and the sound made him shudder. When clean, they rolled through the fluid in a way that reminded him of childhood trips to the carwash, parting the flow of crimson enough that he could get to the kitchen.

Once there, Frederick hit the speaker button on the old telephone he kept on the counter, the one covered with his bloody handprints, and then tapped the sequence that called his mother. While the phone dialed, he used his elbow to turn on the sink, letting the water run over his blood-caked hands. It didn’t do much to stop the bleeding, but the coolness felt soothing, and washing some of the blood away at least made his hands feel lighter and easier to move.

“Hi, honey, how are you?” his mother’s voice came over the speaker.

“It’s happening again,” he said, receiving the expected sigh on his mother’s end.

Frederick thanked her and hit the button to disconnect the call. She’d be there within the hour, wearing galoshes and a rain slicker. Ready to feed him like she had when he was a baby, since the bleeding made gripping slippery silverware a form of torture.

He hadn’t needed her help in a few weeks, but he could never predict when the bleeding would start. The first time, he woke up screaming and never completely adjusted in the forty days before it stopped, just as suddenly as it started. None of the nurses or doctors at the emergency room had any idea why it was happening to him, but at least one of them must have talked about it, and he arrived home to find dozens camped out on his lawn. Every day, he woke up to find vigils outside his door, until the bleeding stopped —  and then it came back. It must have been two dozen times over the last few years, drawing smaller crowds each time. If there was a pattern to when it arrived, neither Frederick nor any of the many witnesses had decoded it.

Frederick hit the button on his blood-stained television remote, hoping to distract himself while he paced slowly back and forth, to keep the blood from coagulating any more than necessary.

After a short item on the local basketball team’s unexpected success, the news channel he’d activated switched to footage of dozens of people at a highway underpass, their eyes drawn to an image formed in oil. He’d seen enough coverage to know this had been going on a few days, but he had no desire to get in the car and make a pilgrimage to the site. Even if all the bleeding hadn’t made him incapable of doing so.

It didn’t feel that long ago that the same people lined up to see him. Many had given him money, most of which he quietly passed along to the neighborhood soup kitchen and the homeless shelter. More asked him for advice, and Frederick always struggled to find anything that didn’t come across as an easy platitude, as he had no understanding of what was happening and hadn’t asked for it. His mother didn’t mind the attention at first, thankful it provided her out-of-work son enough money for basic necessities, but had soon grown tired of the spotlight. Her son’s sudden inability to perform basic tasks without falling or dropping things had cut her deeply, and she hated watching him suffer.

Frederick was grateful she was still willing to come over and care for him; everyone else had long ago moved on. He wished he had thought of more helpful, or at least interesting, things to say to them before they went away. More than that, he hoped the blood would soon leave as decidedly as they had.

Jeff Fleischer is a Chicago-based author, journalist and editor. His fiction has appeared in more than forty publications including the Chicago Tribune's Printers Row Journal, Shenandoah, the Saturday Evening Post and So It Goes by the Kurt Vonnegut Memorial Library. He is also the author of non-fiction books including Votes of Confidence: A Young Person's Guide to American Elections (Zest Books, 2016), Rockin' the Boat: 50 Iconic Revolutionaries (Zest Books, 2015), and The Latest Craze: A Short History of Mass Hysterias (Fall River Press, 2011). He is a veteran journalist published in Mother Jones, the New Republic, the Sydney Morning Herald, the Chicago Tribune, Chicago Magazine, Mental_Floss, National Geographic Traveler and dozens of other local, national and international publications.