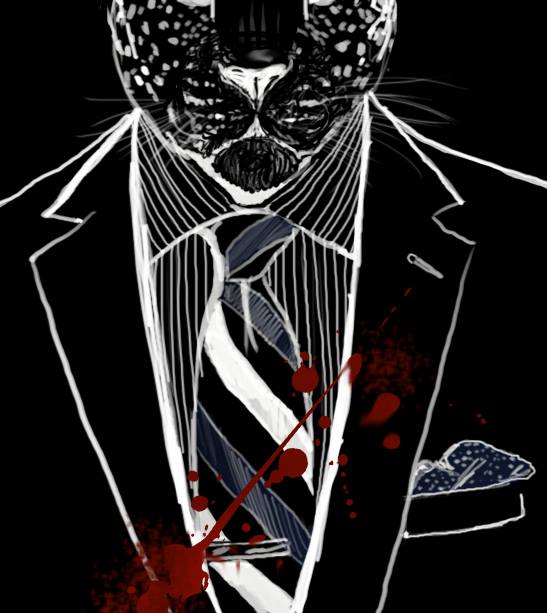 I saw him on one of those humorous panel shows and thought him like a leopard or jaguar stalking through the jungle: very sexy and a bit dangerous. Wondering if anyone had ever told him this before, I decided someone should, found his website and sent him an email. What I added was that, when it came to actually having sex with someone, what I wanted was a person whom I could trust, which is never a thing you can do with a cat.

I didn’t expect a reply but I got one. He thanked me for my complement, said no one ever had compared him to any sort of feline and that he would be in my city soon for a promotional tour. Could he take me out for a drink to repay me? I was doubtful but, in the end, I just couldn’t miss the chance to set eyes on him in face-to-face person. So, I said, ‘Yes’.

He started wooing me then, first by email, then by Skype, in the time before his visit. He soothed, he reassured, he purred. Then he arrived and proved to be every bit as seductive as I’d expected him to be. I was his willing prey, falling into his bed with trust. Afterwards he pounced. Not physically but emotionally, with irony and sarcasm he bit off my head and he swallowed it. Then he lay there half asleep, cat-like, glutted with my pain.

He hasn’t been on that panel show again when I’ve watched it. Perhaps he’s been licking his wounds since I bit off his head and I swallowed it.

Susan Cornford is a retired public servant, living in Perth, Western Australia. To date, she has (co)won only one competition but has been short-listed or made finalist for numerous others. She has pieces published or forthcoming in Antipodean Science Fiction, Switchblade, The Fable Online, The Gambler and The Vignette Review. She now considers herself an emerging flash writer.