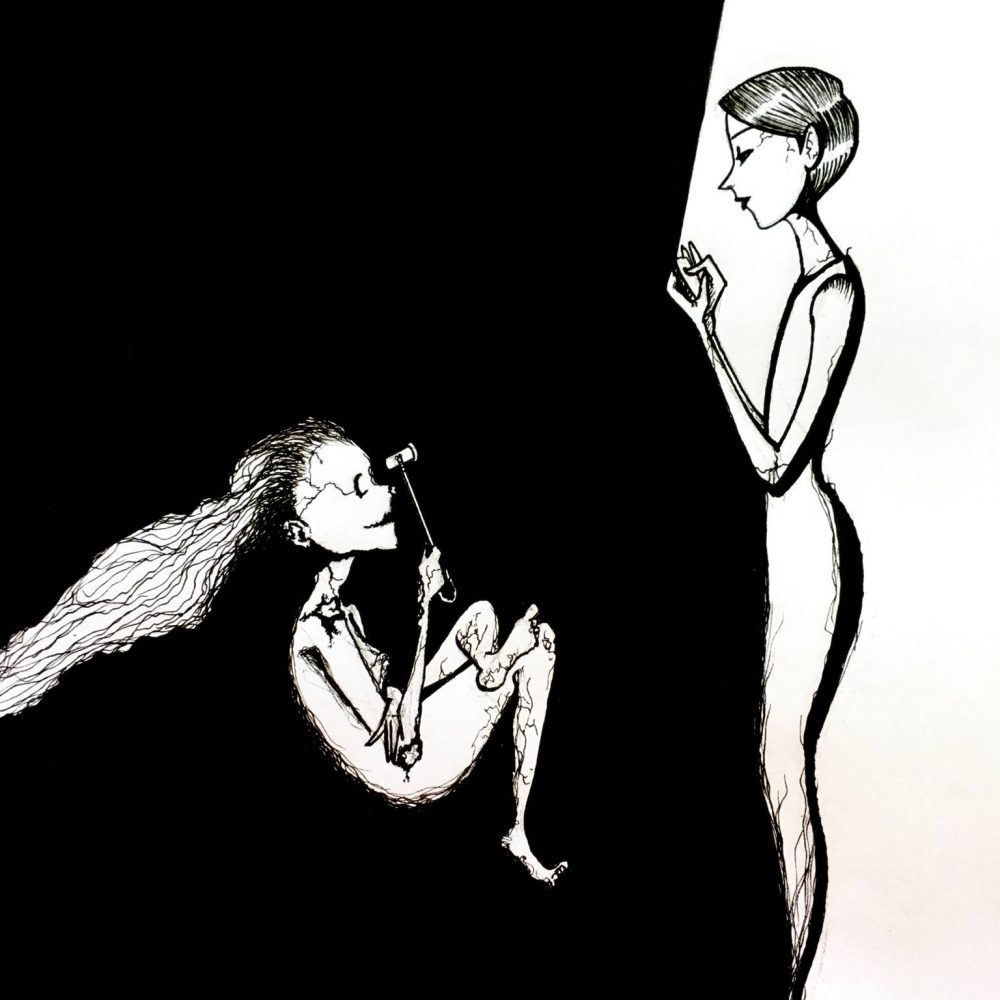 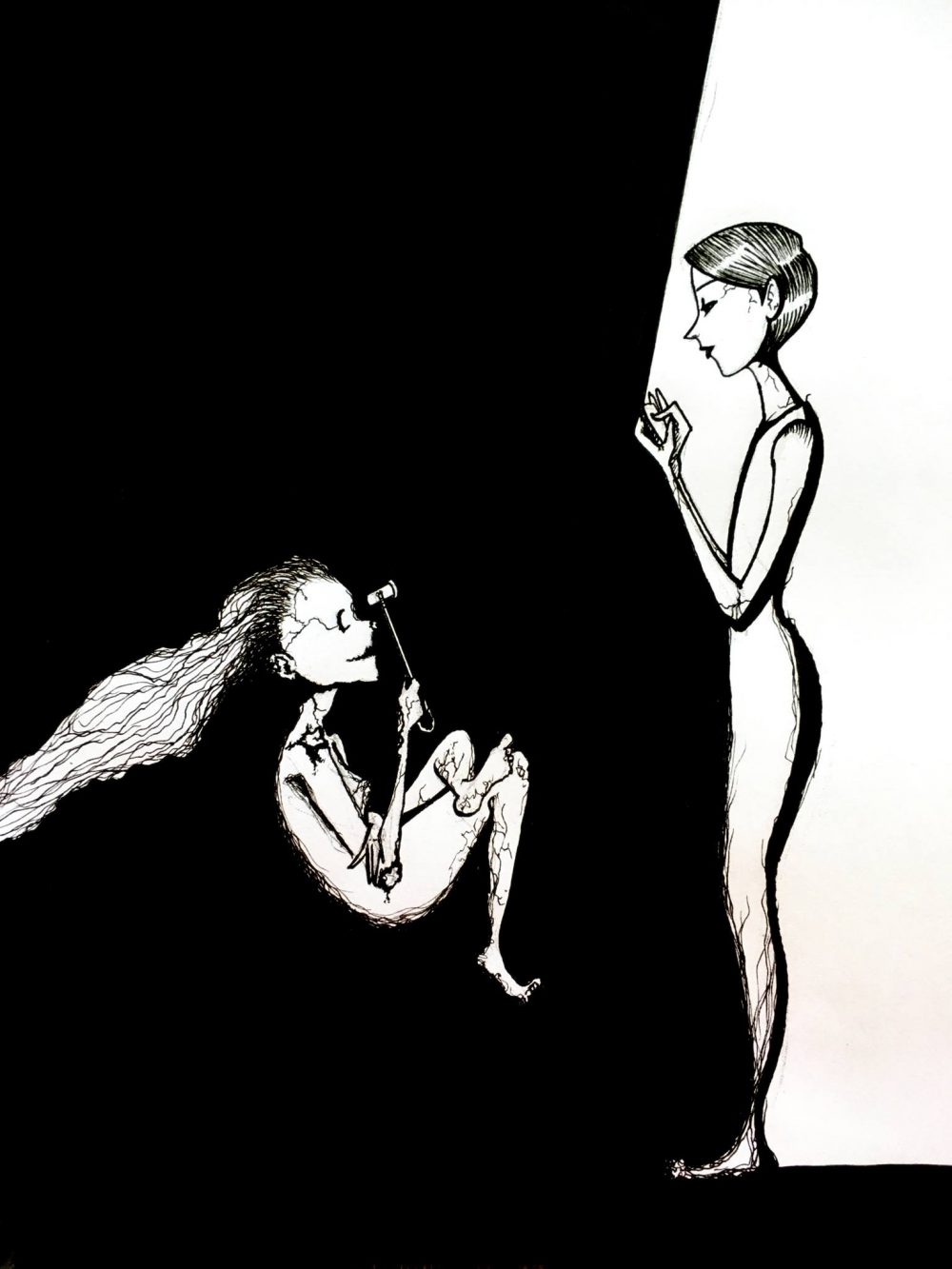 You drive up on their lawn, throw the Buddha through the window, and pass out in your own vomit. It isn’t your proudest moment. But what was? You haven’t taken a risk in your glossy little life, much less on something that could end so spectacularly disastrous. So here we have it: the most admirable thing you’ve done. Your car, driver’s side door flung open, headlights beaming into their living room, sits with its engine still running. Their formerly elegant windowpane reduced to shards of shattered glass glinting across moonlit grass as if they were ice flakes. Not that ice flakes would occur in LA, but it’s the first thing that comes to mind. What does happen here: a stone Buddha with a broken nose. You, in a similar state, supine on the lawn. If only you could see your hair. You spend six hundred dollars at Jean-Claude for that look, only this version is much better than anything he does, all matted and mussed like that, natural. Your mascara-streaked cheeks and smeared lipstick. Your pretty trench coat, white button-down blouse, and pink jeans covered in grass stains, mud, and vomit—the contents of every single craft cocktail from the fancy little speakeasy around the corner on Santa Monica. But don’t worry. You still look pretty.

I would know. I’ve been watching you for years. First on Friendster then MySpace then Facebook, Twitter, Instagram, Pinterest, and of course the reliably consistent Google. You have been an independent filmmaker, a magazine writer, a curator of miniature works of art. Mostly you have been a mother. I’m sorry about your kid, the diagnosis. It must have been so hard for you. I can’t imagine since of course I am not a mother, if I was I wouldn’t have had time for such close observation of minutia, the trivial details that obsess me, the true reveals of other lives. Lives like yours. Unexceptional and wholly absorbing. It’s why I do what I do.

By that I don’t mean the stalking. I mean my job. Or rather, I made the stalking my job, though I preferred to call it curiosity. I became so good at my job that within a decade they called me the female Mark Zuckerberg in the press.

Get off the Internet, Mimi, I told myself so many times. There is nothing for you there. At least, nothing good. But I lost hours, I lost days to my distractions. There was no getting off. It was with me everywhere, wherever I went. I needed it for work. I needed it for everything. Mostly, I needed it for connection, even if the people I was connecting with had no idea that’s what we were doing.

But there’s you. Drunk and passed out on their lawn. They don’t know how much time you spent with them. With their second selves. Or at least she doesn’t. Don’t worry, he won’t reveal your connection and I won’t come out from behind these hedges. I am so fucking happy to be here. Your celebrity-worthy semi-public meltdown is the ultimate reinforcement. I’ve been hoping for a long time that this would happen.

You looked too perfect to be a real person.

But I should have known. It’s always the perfect ones who have the darkest sides.

You wake to them standing over you. The fractured early sunlight splits your eyes.

“Definitely never seen her before,” the man says.

“Well she can’t be a stranger,” the woman says in a French-accented lilt. She sounds like a cartoon and looks like she stepped out of a 1940s movie. “She’s done this on purpose. There must be a reason.”

“Maybe it’s you,” says the man. Trying to turn it around, flip the situation onto her. Classic.

You try to roll over to sit up but your head is now as heavy as their precious stone deity lawn ornament—missing, now returned.

Are you sad now? Satisfied? The answer is at the touch of an icon.

I’m so glad I created it.

Liza Monroy is the author of the collection of personal essays Seeing As Your Shoes Are Soon To Be On Fire (Counterpoint/Soft Skull Press), the memoir The Marriage Act: The Risk I Took To Keep My Best Friend In America And What It Taught Us About Love (Counterpoint/Soft Skull), and the novel Mexican High (Spiegel & Grau/Random House). Her writing has appeared in The New York Times, The New York Times Magazine, The Los Angeles Times, O (Oprah Magazine), Poets & Writers, Marie Claire, Newsweek, Guernica, Catamaran, The Village Voice, Everyday With Rachael Ray, Jane, Self, Psychology Today, Jezebel, Publishers Weekly, Bust and many other publications and anthologies, including The New York Times’ Best of Modern Love, Goodbye To All That: Writers on Loving and Leaving New York, One Big Happy Family, and Wedding Cake For Breakfast. A graduate of Emerson College and Columbia University’s School of the Arts, Liza has taught writing at Columbia University, UCLA Extension, and is currently on the faculty of the Writing Program at UC Santa Cruz. She loves surfing, playing capoeira, reading, traveling, drinking coffee, and spending time with her husband, pug, baby, and their unruly potbellied pig, Señor Bacon.