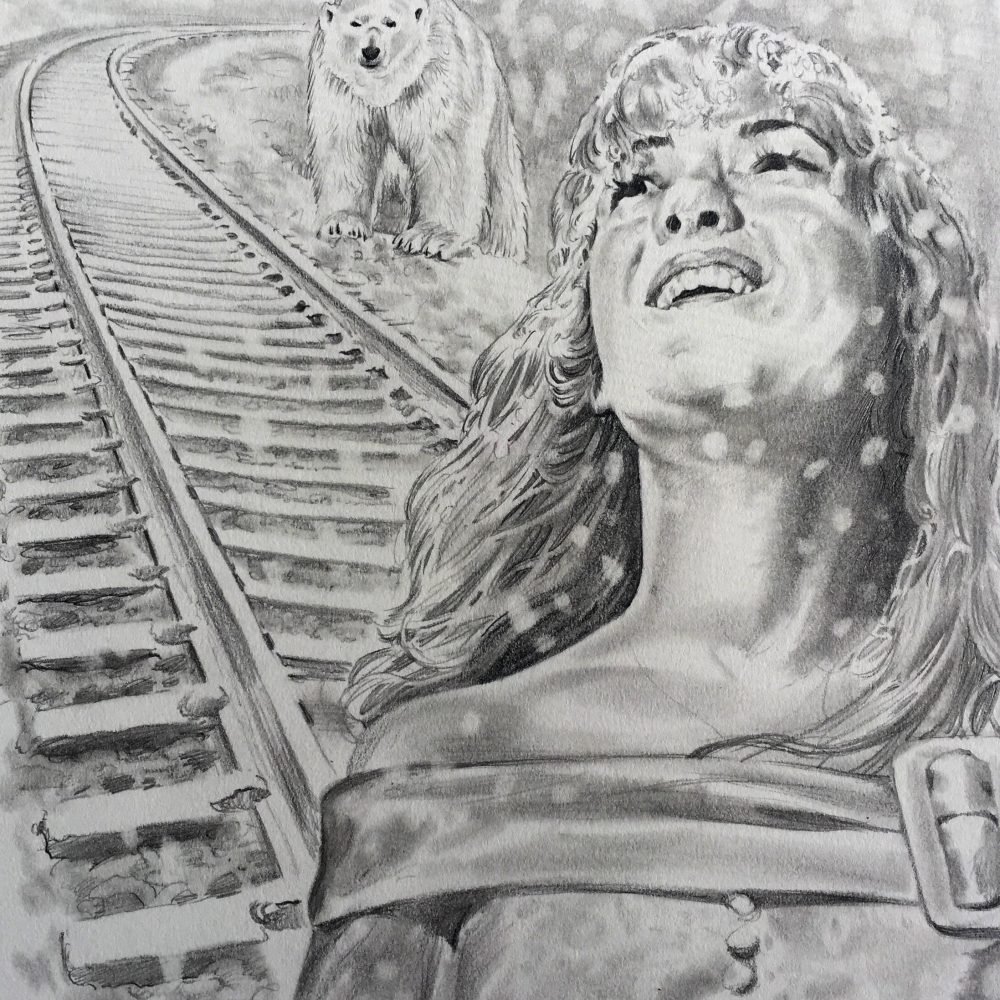 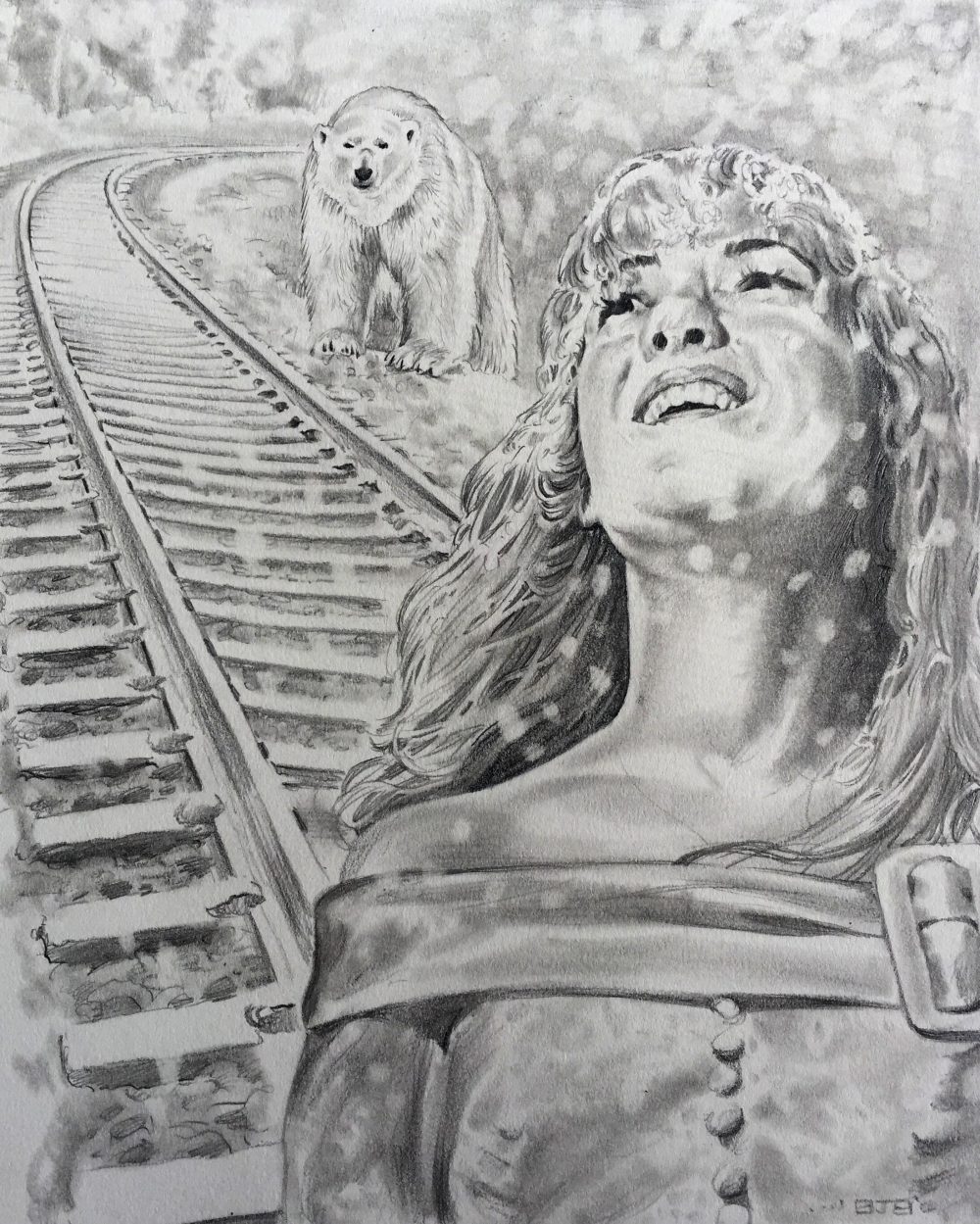 In Girl, Interrupted, Winona Ryder ponders how quickly it could all end: her life—her sanity.

Do we make ourselves insane?

The year we moved to New York more bodies than usual were falling in front of trains. Some by choice. Others pushed.
Some pure accidents. And I’d be lying if I said I’d never thought of it: the rush of air through the tunnel. How quick it would be—how easy.

But should suicide be easy?

And then there’s all those signs on the trains announcing how many people are hit each year and how many actually die. Surprisingly, only about a third do. Is there anything worse than throwing yourself in front of a train and living?

I like to remember Winona dancing in snowflakes—red hair flecked. Johnny Depp scissoring the sky white. But that movie always makes me sad. Though I do love the snow, have red hair myself, but no Johnny Depp. No scissors in the night. No ice sculptures. No myth.

In Greenland, the first four who shoot a polar bear share the meat. A tradition that stretches back in time like the land itself: bleak with specks of color in houses: red, yellow, blue against white—against the rage of the sea.

But now concrete becomes the gray of days. Seaside villages closed by the government—power shut off. They call it rapid modernization.

But when something moves too fast, it is bound to crash. So the youth take to controlling the only thing they can: to live or die, and the death toll rises. Seven times higher than suicide rates in the United States.

I’m home with a glass of wine watching a new miniseries on HBO and there is Winona—back from the dead. She’s older now, but barely looks it. She isn’t dancing in snowflakes. Her hair isn’t red. Johnny Depp is nowhere to be found (probably filming another pirate movie).

But even here on the screen sipping her cocktail, she understands pain—the loss of innocence—the taste of fame that never leads anywhere good.

She’s a warning sign to the main character. To the risks we take to make others happy—or maybe just ourselves. He (not she) will kill himself at the end.

My favorite scene in Dead Poets Society isn’t all those kids standing on the desks at the end—O Captain! My Captain!—but Ethan Hawke in the snow, tripping, falling, crying after Neil’s suicide.

I’ve never shot anything: the white of a bear should stay white—not red—no bullets—no meat. And I’ve chosen concrete to build my world—left by choice the wide expanse of land.

And months ago, when the snow fell in the city, I trudged through it to the liquor store and saw children laughing in the streets: no cars, no danger. Warmth only a few steps away and the knowledge that it would pass. It would melt. And life would go on here in Manhattan where steel and concrete push bodies forward.

Our days gone gray. Our lives modern. Our bears in cages.

Sometimes we long to swallow someone else’s pain. To redefine ourselves as a survivor of great tragedy. Like that woman who pretended to be a survivor of 9/11. Saved from tower one. How she weaved a new life. Became president of a survivor organization in New York. But she wasn’t there. Wasn’t even in America when it happened. Sometimes we long for something to jolt us awake—make us alive. Make us new.

Stephen S. Mills is the author of the Lambda Award-winning book He Do the Gay Man in Different Voices (Sibling Rivalry Press, 2012) and A History of the Unmarried (Sibling Rivalry Press, 2014). He earned his MFA from Florida State University. His work has appeared in The Antioch Review, PANK, The New York Quarterly, The Los Angeles Review, Knockout, Assaracus, The Rumpus, and others. He is also the winner of the 2008 Gival Press Oscar Wilde Poetry Award and the 2014 Christopher Hewitt Award for Fiction. He lives in New York City. Website: http://www.stephensmills.com/