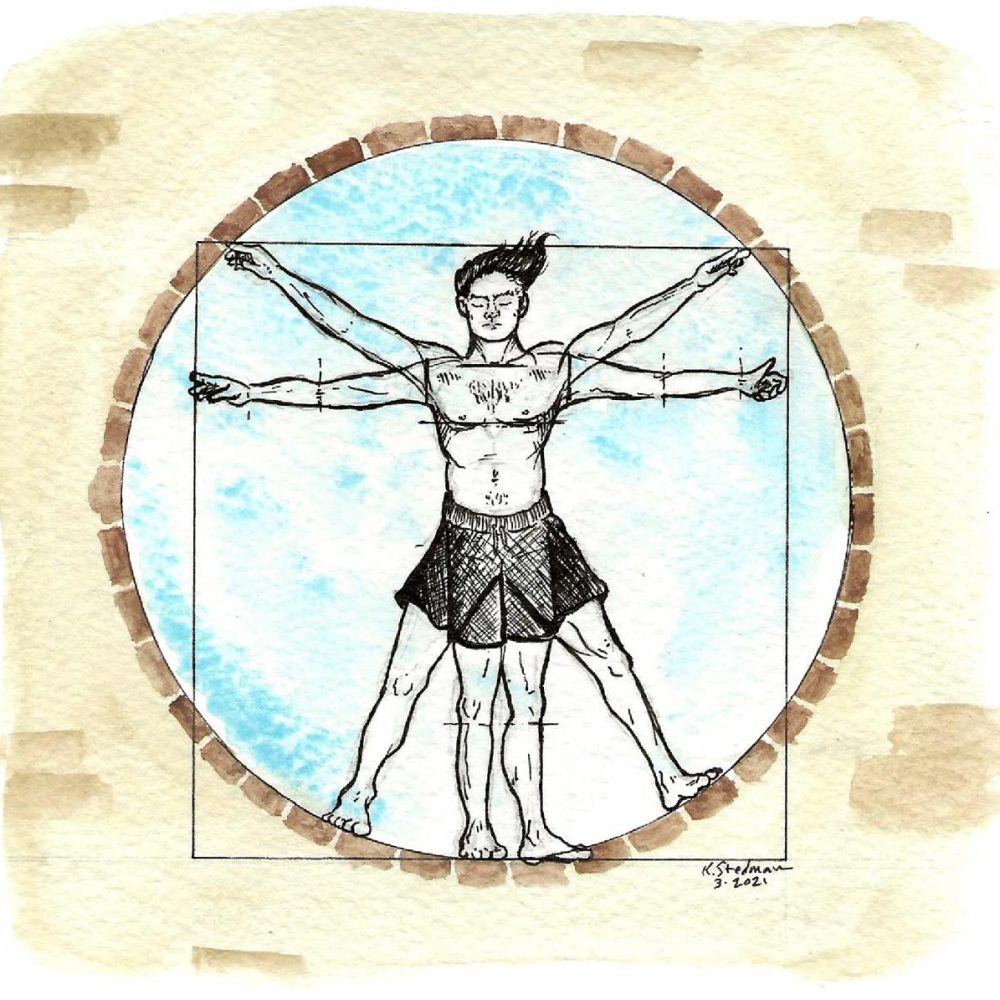 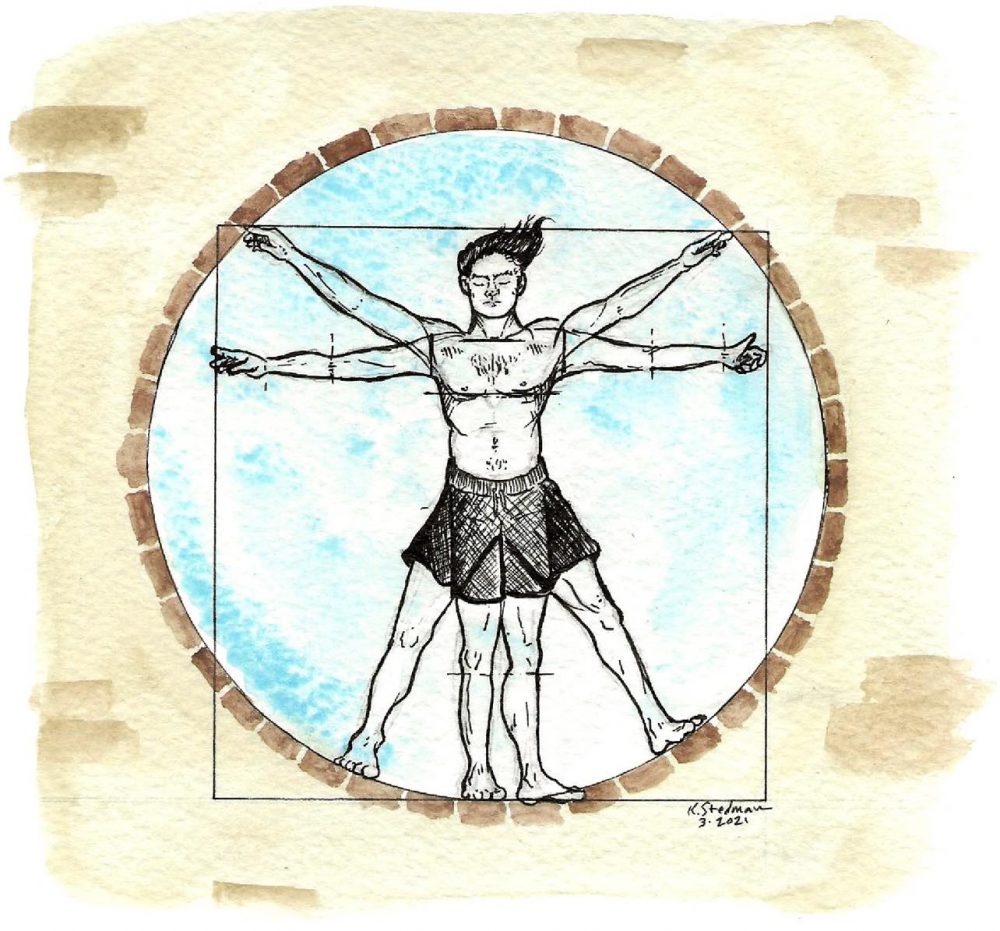 Jordan fell in love with himself every time he stepped into the hot tub. With every inch he further immersed into the water the more enamored he became. As his limbs loosened and the warmth seeped into his pores, Jordan imagined his name was spelled Jordyn with a “y,” and that he could attract the most gorgeous women. Imagined he could afford to own a sports car and a tuxedo—for those “just in case” occasions.

When he was dry, Jordan felt average. He worked in an office that sold medical supplies, had been there for nine years. The only time he felt confident around women was when he was basking in the sweltering waves, the water thrumming at his lower back. The moment he stepped out, his confidence evaporated, sunk as readily as the droplets shed his skin. He often wondered what it was about soaking in a whirlpool that made him feel this way. Was it the relaxing sound of popping bubbles, the hypnotic whir of the motor, the jetted bursts caressing his spine? Perhaps the heat and chlorine had simply made him feverish.

Jordan had been known to sneak into local hotels and spend an entire Saturday in the Jacuzzi. At the Marriott by the airport he’d made a connection with a cute brunette, though he fell apart when she asked to go back to his room. He could have lied, said his friend was asleep up there, anything. He ended up admitting he wasn’t staying there, and even confessed the correct spelling of his name, though soon realized he hadn’t uttered that particular lie. Before she had a chance to alert security, he slipped out the side door.

He knew his behavior was unusual. He confided in his therapist that while sitting there, in what he described as a “heated cocoon,” he became the cinematic husband who blocked bullets for his wife, or the man who dove into sunken cars to retrieve a trapped lover—only he was willing to perform these feats to save himself. The therapist explained that spas are amniotic, and it made sense that he felt more secure. She then asked how tall he was, and suggested he felt more confident because sitting down disguised his height. Jordan had never considered himself neither short nor tall, always average. He nodded and quickly changed the subject, then changed therapists.

Once when he slipped into the Jacuzzi at a Holiday Inn in his hometown he saw someone he recognized—he figured he remembered her from Cherry Oak Elementary, or church camp. A week later, at an acquaintance’s pool party, he once again spotted her sitting across from him in the whirlpool. He had been staring at his own reflection in the sliding glass door when he caught her eye–he thought they’d both been peering back at his mirrored image, but realized she, too, had been admiring her own reflection.

He offered her a Miller Lite—In a can, of course. “Where do I know you from?”

“I used to work at Splash and Spa.” Splash and Spa was the premiere whirlpool retailer in the state. He’d only been there a handful of times, but stopped going when he realized he’d never be able to afford anything other than a logo-ed robe.

“I got fired,” she said. “I guess they didn’t like it that I spent all of my lunch and coffee breaks in the tubs.” She explained that they were floor models—emptied ones, too.

Jordan had never sat in a dry whirlpool, but now wanted that experience more than anything.

“I thought of getting a job at a hotel, like the front desk or housekeeping,” she said. “But then I heard that most hotels don’t let their employees use the facilities.” She shrugged her shoulders. “What would be the point?”

He tuned out the rest of the party go-ers when she told him that she had H.T.R., and that it was getting better. He, too, had contracted the dreaded Hot Tub Rash, but had been too embarrassed to admit it. Even though he didn’t know this woman’s name or what she looked like on land, he wanted to ask her out. She was basically the female version of himself, yet better.

He thought back to the time he’d mentioned a heated cocoon in therapy and his therapist interjected with: “Oh, so there’s a transformation to come.” Even though he didn’t trust much of what that woman had to say, he couldn’t help but wonder if this was what she’d been referring to.

He stared at the wet beauty across from him. When he caught her winking at her own reflection, he felt encouraged in a way he had never before. “So have you been to the new Hampton downtown? I hear they have a kick-ass hot tub.”

Susan holds an MA in Education and an MFA from Hamline University in St. Paul, MN. Her essays, stories and poems have been published or forthcoming in various print and online journals, most recently North Dakota Quarterly, Gone Lawn, Evening Street Review and Boston Literary Magazine. She lives in St. Paul with her family, most of whom have fur. You can find her on Twitter at @SusanTriemert.