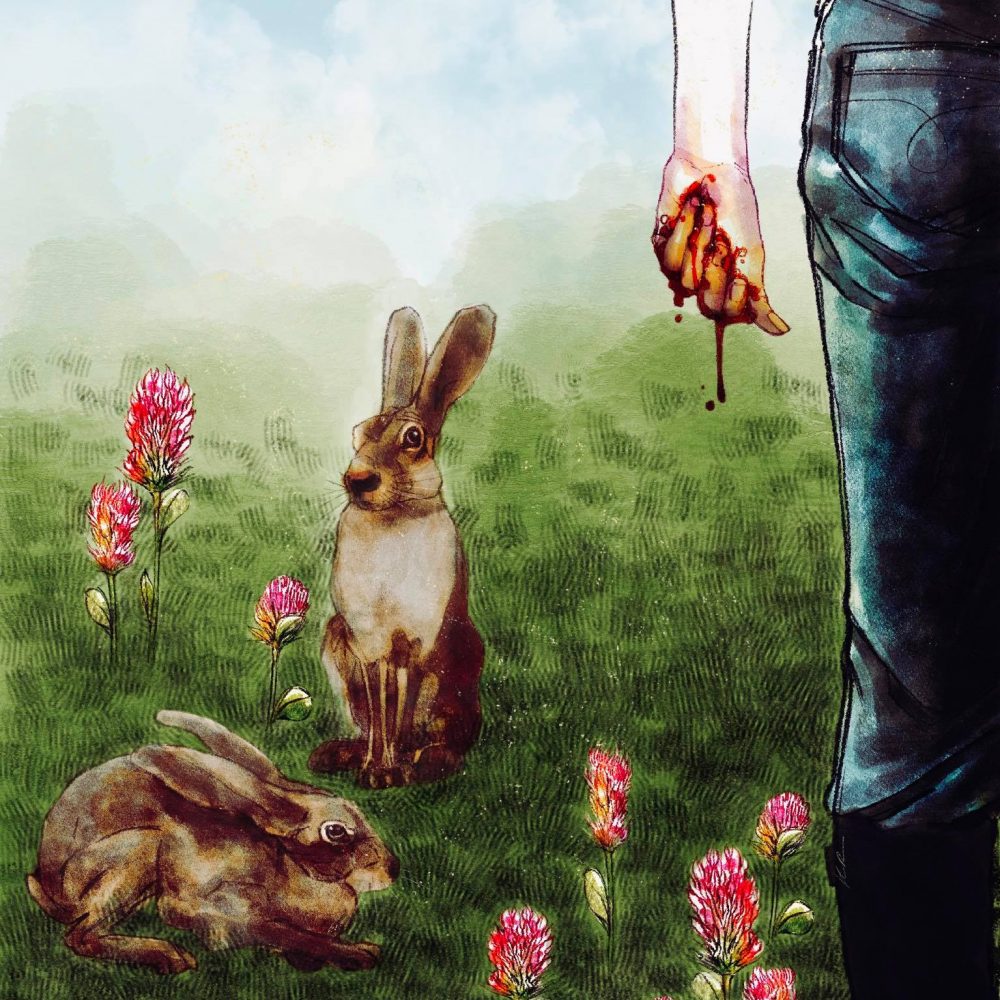 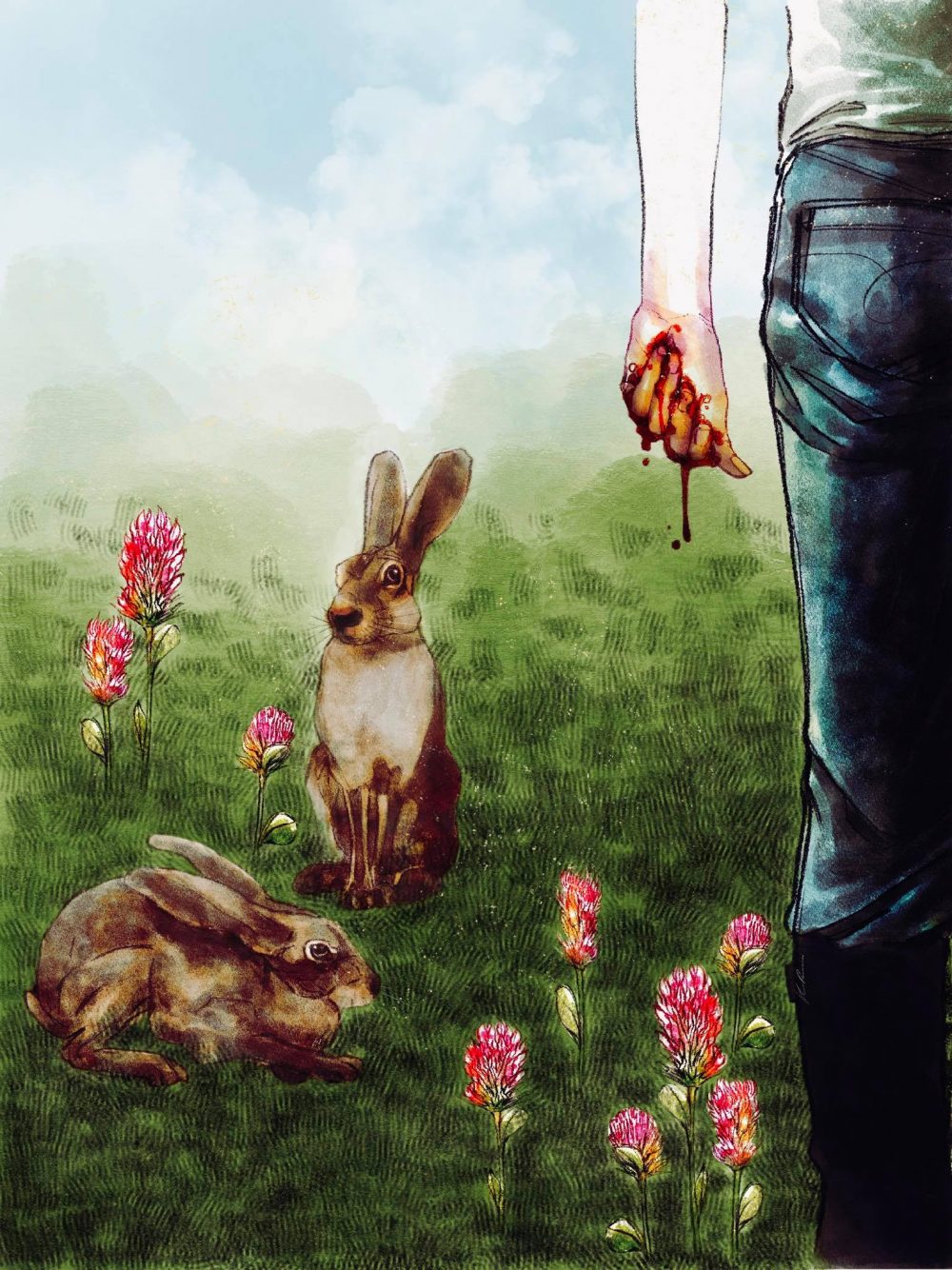 The earth soaked into Lorna’s jeans as she knelt among the ruined greens. Whenever the rabbits didn’t get her lettuce, Lorna counted it a miracle. Yet each time those soft-eared felons burrowed under her chicken wire, part of her rejoiced in their victory. Something must have scared them. Buried under the trampled leaves, the rabbits had missed a Lactuca Virosa.

Lorna pierced the soil with the sterling fleur-de-lis salad fork she’d bought at a yard sale. It was finer, more precise than anything in Burpee’s garden supply catalog. She plunged the tines into the rich sod and wriggled a circle around the infant green, until she could lift it whole. She tapped the tines against its roots, freeing the dirt. The baby lettuce quivered like a suicidal ballerina, plunging to her death, leafy skirt flying overhead, long root-legs conjoined in first position, miniscule rootlets straining for succor from the missing earth, filaments of a toe-shoe-pierced safety net.

Watching a goose smear her way across the wet sky, Lorna dropped the lettuce into her colander. It was foolish to sacrifice a ballerina to a clodhopper like Mavis, but Ned had asked.

“Maybe something from your garden? One of those juices you make?”

Lorna could never say no to Ned. She had loved him since freshman Homecoming, when he’d lent her that handmade red sweater with the three backwards stitches. Twenty years later, Lorna still slept in that sweater, even after Ned married Jessica.

That was no one’s fault; Jessica was the type of girl everyone loved. Lorna accepted it, and she cried real tears at Jessica’s funeral. It was a tragedy, and Lorna was only glad to be able to help Ned through. And if she had fantasized things, it was just a coping mechanism. All those nights, Lorna never made a move on Ned and she would have rebuffed his advance, if he tried. Because that was love. Because Ned was grieving. Only a viper like Mavis would attach herself, like an invasive vine, to the cracks of someone’s broken heart and cry that she had no place to go. That they were both alone. That they could help each other.

Lorna asked Ned why someone as beautiful as Mavis was friendless, why everyone in her past had rooted her out?

But Ned wouldn’t hear it.

It was like he really believed, wanted to believe, that he loved Mavis. Because he was grieving.

Lorna warped the chicken wire back in place. Part of being a friend was knowing when to back off, to let people make their own mistakes, especially when they were thinking with their cock and wouldn’t listen to you anyway, when you thought it would blow over in a season, because you thought there was time, because you didn’t sense the plague sprouting. But even shrinking violets had to draw the line somewhere.

Red clover was good for everything. As Lorna searched her lawn, the Dragonweed climbing out of the river and over her retaining wall, a riot of ruby and amethyst berries, caught her eye. A stronger person would add a few to Mavis’s smoothie. A true egalitarian would consider all people equal, thus weighing her own happiness plus Ned’s happiness at twice that of Mavis’s. A just, objective, woman would not prolong Mavis’s deadly hack and spew. A moral person would see that Mavis would die anyway, was only suffering with each inhalation while jeopardizing Ned with every exhale.

The clover heads were full, juicy. Pink. But the dragon berries shimmered like living jewels. Something for a goddess’ crown. They looked delicious. It was strange, that the most beautiful things should be invasive and poisonous. Like truth. Like love.

Lorna’s lungs hurt; she didn’t realize she’d been holding her breath until she exhaled and, when she did, she trembled as if she might cry. The idea of Ned on a ventilator. For he would be on one and what would she put in her colander then?

Lorna clenched her fists, grinding dragon skin under nails, crushing juice into her palms. This was when she should be deadheading the roses, calming down, breathing. Opening her hand, Lorna considered the ravaged purple skins, black juice, and amber pulp. It would be so easy, and it would be the right thing to do. If she really loved Ned, she would save him.

Lorna deserved happiness. But Lorna was weak. She let the pulp fall to the ground, then fell to her knees and wiped her hands on the wet clover, clawing it. She rolled it between her palms and inhaled the sweet scent. There was almost no residue of dragon weed in this wad of green, and Mavis’s drink did call for more clover. If Lorna would just drop it in, that would be trusting the wheelspin of providence, which a good person should always do. Lorna’s hand hovered over the collected greens. If the roles were reversed, Mavis would certainly toss in some dragon weed. Except Mavis would never because no one would solicit Mavis’s help, plus Mavis was too careless to learn what dragon weed was. Just as Lorna was too cowardly to claim love.

She who hesitates is lost. Lorna was tired of being a loser. Mavis was refusing a doctor. The only question was whether she would drag Ned down with her. Post mortem, Lorna would wonder about the efficacy of her smoothie no matter what course she chose now. Accidents happen. Fate triumphs. Rabbits crawl under.

Lorna tossed the wad of mashed clover into the river. It bobbed downstream, caught between two rocks, furnished a resting place for a dragonfly, then disintegrated and sank into nothing. Behind her little stonewall, Lorna pretended not to notice her fingers closing on more dragon berries.