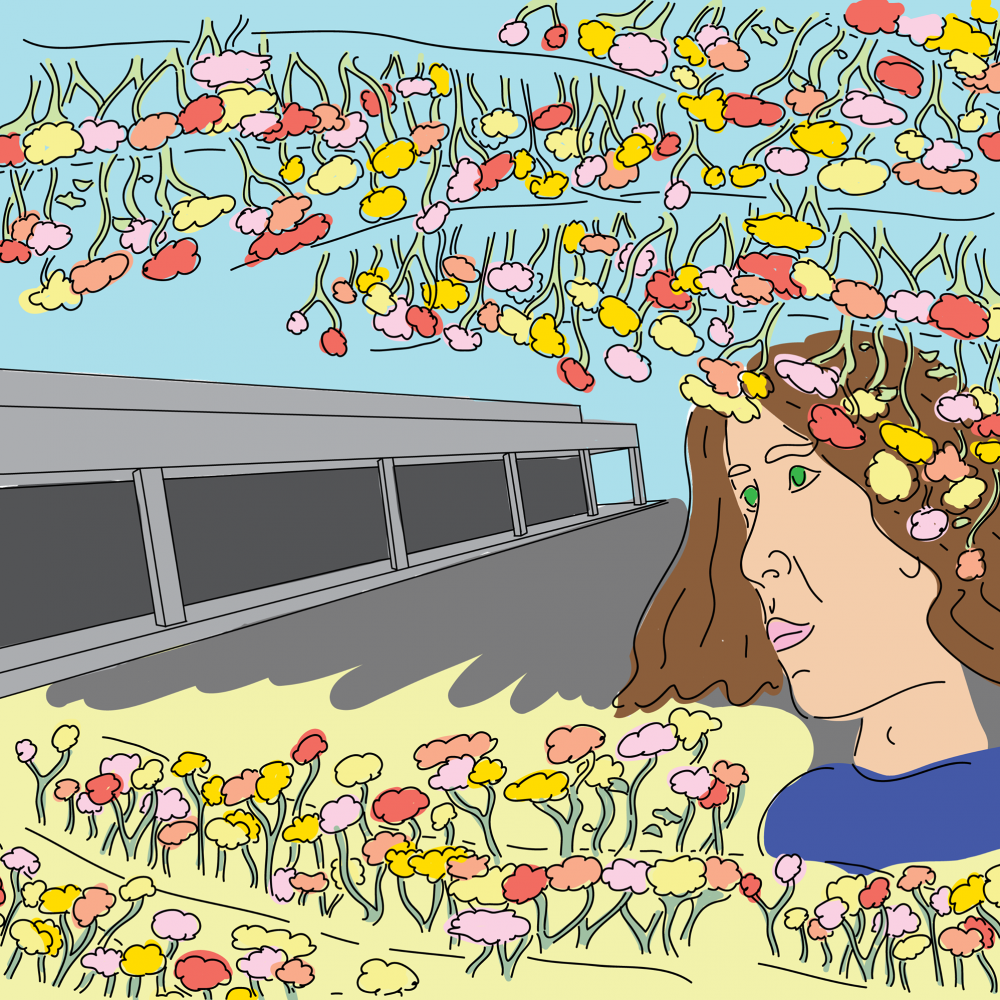 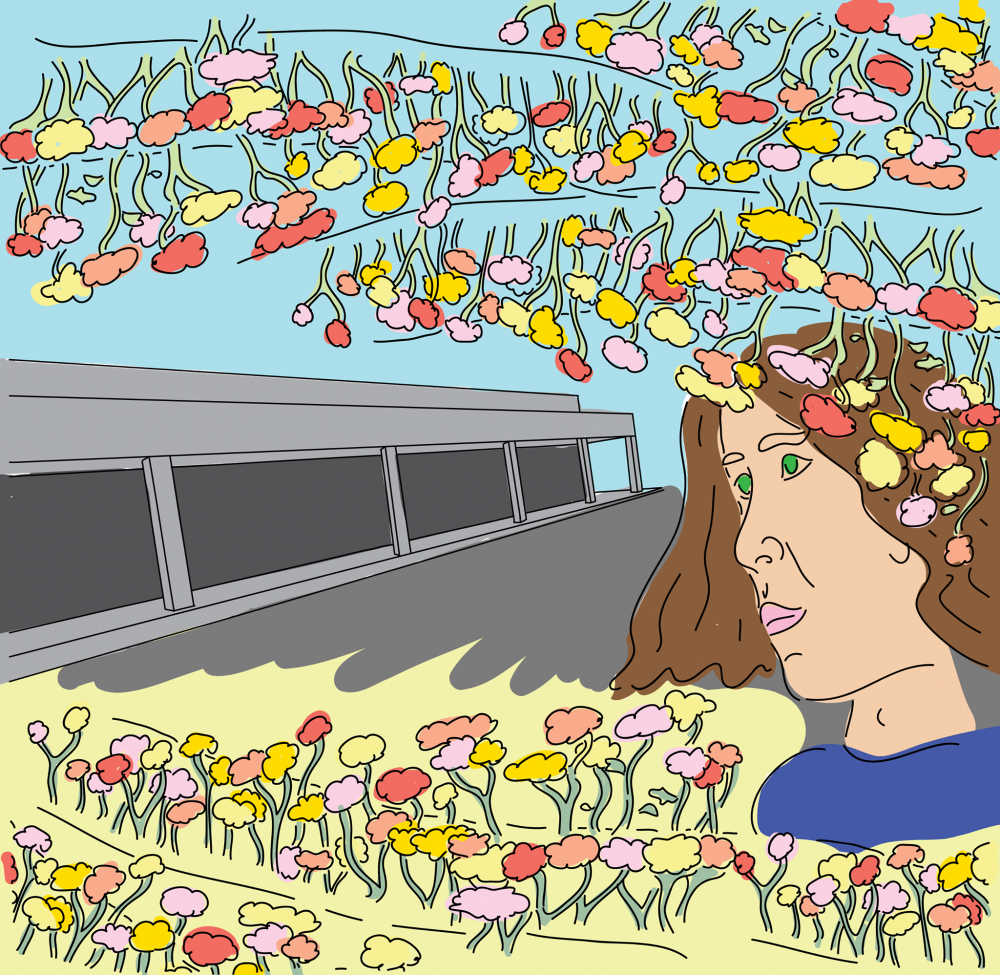 Anya could hear the wrecking ball smash the theater down. Moisture and mold eroded the internal structures of the building. Icy New England winters gave way to humid summers. Aspergillus blossomed over audience seats, slowly devouring water warped boards. There were three kinds of people in the world, Anya thought. Those who make things worse, those who try to keep things in stasis, and those who try to improve things.

Anya hung another bunch of lavender upside down. Inverting a form meant to retain water kept microbes from devouring its cellular structures. Herbs hung from the ceiling, lemon balm, borage, feverfew. She enjoyed hanging plants upside down, stalling the state of decay long enough to make a tea or salve from dehydrated leaves.

The city had fallen into a regressive state of entropy. Inspired by department stores sucking capital out of local commerce. Empty storefronts and condemned symbols lined the once lively downtown. A strip mall pulled customers from locally owned restaurants into its franchises. Money floated out of the city.

Empty yellowed windows expressed a collective death. The former industrial town never seemed to recover from the download of inanimate things. Plastic ceaselessly being pumped into their psyches from other realms.

In the back of the building, seedpods shook on hollow stalks. In the summer, bee balm and catmint overflowed from garden beds. Sunchokes and nasturtium fed hungry pollinators.

Anya boiled bayberries over a hotplate. The wax would be separated and poured into a candle. She dipped a mullein stalk in tallow.

There was a time when Anya wanted nothing. Her spirit had been stripped of joy. Plans for development went on behind closed doors. The people never had a chance. At the city meeting, Anya stood before the town and made her case. She begged the mayor to delay the project. No one listened.

Before the strip mall was built, Anya sat in the field where it would be placed. She watched warblers and robins forage for grubs amid goldenrod and milkweed. She apologized to the hairstreaks and snails for the destruction of their home. She wiped her eyes on her sleeve as the wind blew through the field. They had nowhere to go.

Anya uprooted plants from the meadow. She wiped her hands on her pants, which were covered in dirt. She placed the perennials in the back of her car.  Stars emerged as the sun set over open earth for the last time.

She watched the people grow sicker. Emaciated and bloated forms, opposite ends of an unwell extreme. Land was parceled and unshared. Communication occurred in bisected lines, stymied by bureaucracy.

Former factories eroded into the earth. As a teenager, Anya walked the halls of the city’s abandoned asylum. Beds with restraint straps turned over in the gloom. Wire cages rusted over broken windows. She didn’t think much had changed. Society’s solution for masking madness took the form of isolation.

Leaves littered the asylum floor. Violets grew from broken porcelain sinks. As vines overtook the building, it occurred to Anya, that the only way to fix her soul was to align with nonverbal entities. They spoke languages of neurons and synapses, poisons and fragrance. They redeemed rigid architecture, crumbled walls into small mountains.

She could never grow too close to people, perpetually caught in love-hate relationships. She loved a dancer once, but his parents moved him to pursue a professional career. They spent their final afternoon collecting flowers and berries. She took him to the asylum. He wove her a flower crown. They sat under the decaying architecture squishing the juice out of fruit and smearing it on each others faces. They laughed, and then cried, and then he left.

Years elapsed. She opened the shop downtown. Rain flooded the drains. Brides entered the boutique across the street. For sale signs replaced window mannequins. She poured vinegar into mason jars stuffed with mugwort. Used fennel to ward off evil spirits.

People drifted through the door, absorbed in their stories. Each head had its own mental tempo, Anya thought. It was a wonder anyone could converse, that thoughts could be comprehended. She imagined conversations were like butterflies, meeting and departing in air. There was a certain rhythm everything fell into, impossibly.

She wondered if her sorrow arose from a constant state of dying interactions. In the same way she got sad when blossoms turned to husks.

Anya let the plants rebuild her soul. It had been filled with loss and cobwebs. She pressed flowers, arranged them around old portraits. Her Great Aunt once walked the asylum, stuffed moths in her mouth.

Anya wondered if the dancer would return. She was used to being forgotten. It was easier to get lost in floral time, when the tinkling doorbell led only to disappointment. She hung everything upside down. Everything was better upside down. She imagined tipping the city and shaking out its husk.

Gabrielle Griffis is a mutli-media artist and musician. She studied creative writing at the University of Massachusetts Amherst, where she has also worked as an affiliate of the Juniper Writing Institute. Her fiction has been published in or is forthcoming from X-R-A-Y Literary Magazine, Cease, Cows, decomP, and Blue Lake Review. She works as a librarian on Cape Cod.