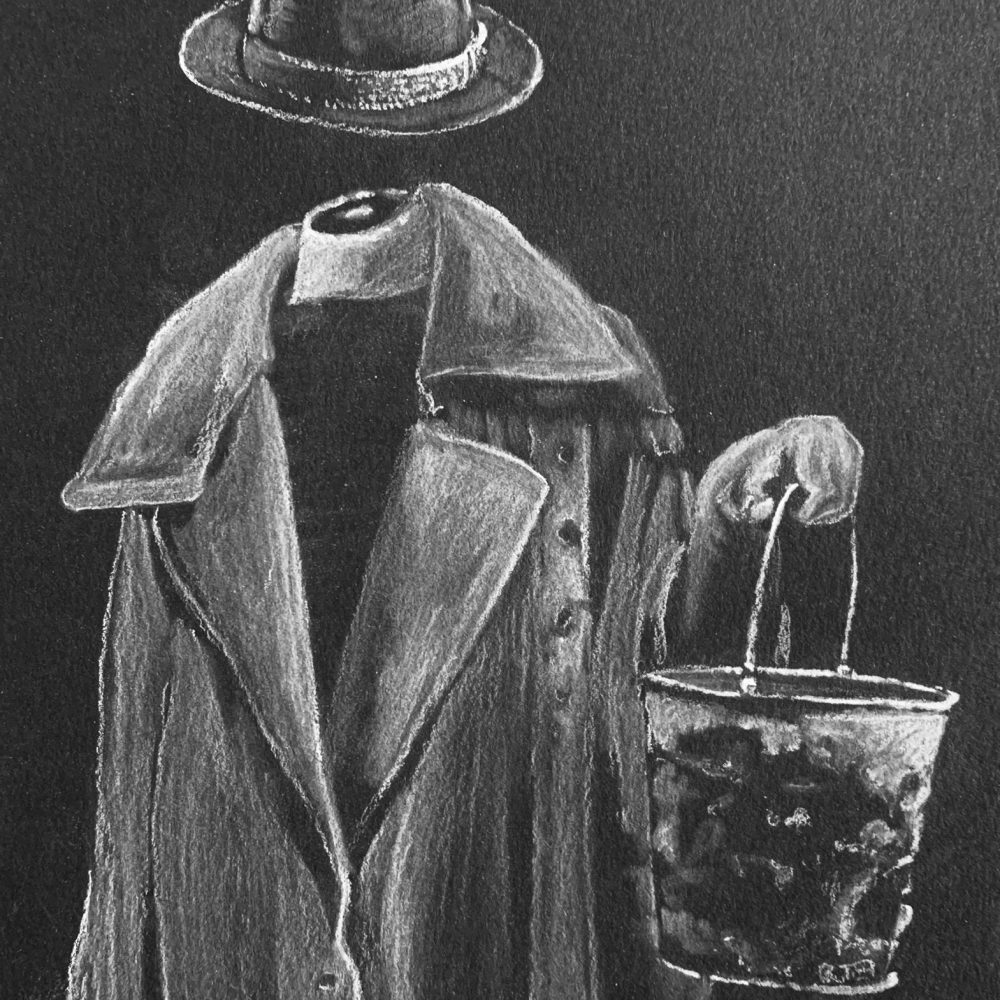 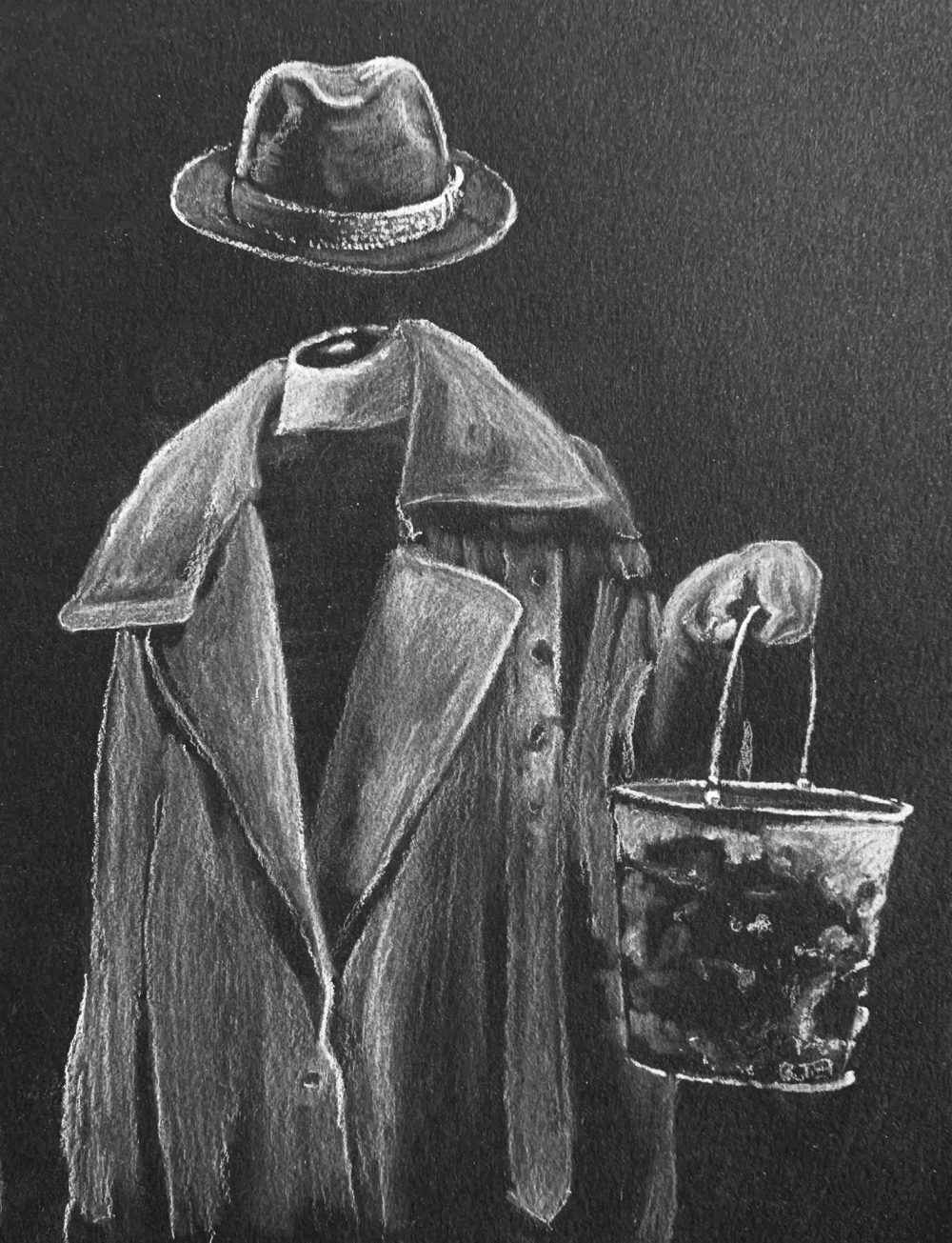 Dude must be dying—sta morendo—in heat like this. Thirty-six Celsius and he’s got this ratty-ass trench coat hooding his head. But you don’t realize this, not at first: to start, he’s dead, decapitated—decapitato. Or, not dead: or, at least not just dead, because there’s his hat, this borsellino-type thing, floating above his absent neck.

And then he, the corpse—il cadavere—lifelessly waves. The hat, you see, attaches to a twisted coathanger. Not dead, then—just dying. Passively passing on a folding plastic chair outside shade cast by some castle or other (already you forget its name) while fathomably wealthy tourists likewise passively pass.

Beside the man, in this Rome-begrimed, rusted bucket, nested euros stir desultorily. Your mother, afternoon-drunk on vino and prosecco dalla casa from when your father’s credit card refused to work, suggests stealing it. How fast could he run? A moment later, though: that’s actually awful, you both, soberly, agree.

Eleven—undici—days later, on the second-to-last—penultimo—day of your trip, you see the same act off one of Venice’s less-grand canals. Not that anyone cares, or would even be able to compare, but the illusion, this time, is complete. A T-shirted Columbia grad passes: the man shambles after him, disembodied trilby jauntily bobbing. Behind a woman in a white sun hat, her braided blonde daughter drops a small stracciatella gelato.

You clap; he turns—you imagine, beneath the trench coat, a gap-toothed grin—and doffs his hat. Dodging a swearing, solid German, you cross the bridge. Before him, you shift awkwardly, searching for words. Up close, his smell—odore—is awful: of sweat and rot and the city-choked, city-swallowing sea beneath your feet.

At last he offers a white-gloved hand. The texture of the palm is sticky and cheap; you’re reminded of half-forgotten falsities, of lost Halloweens. Thank you, you say—grazie. When he releases you, resettling into his previous stillness, you deposit one two-euro coin, still a curiosity—una curiositá—into his bucket. You feel lightened by the shed weight, freed. You cannot see his eyes, but you imagine his gaze, the recognition therein, the mingled outrage and disbelief as you stoop, snag his rusted bucket, and run.

Now, why did you do that?

Later, during the many silent, sweat-filled days to come, you will endlessly revisit this moment, the greasy slickness of the bucket’s handle, the headless man’s stillness, your and your audience’s callous unsurprise. The rationale for your action, as you will rationalize, ran thus: stealing from the man, running, you’d hoped to be caught. Deprived, momentarily, of freedom—libero no more—you’d have languished for: what? Uno, due weeks? In the worst case, months? And afterwards, would you not have been released—liberato again?

No, you will think, not solely freed—forgotten. Obligations obliterated. A fecund memory in the hearts of those the old, American you once knew. An artist, a writer, a singer, a saint. All could be you; you, you will remember thinking, could be anything—nullo at all.

But nullo, as you will later learn, is one of Italian’s more curious words, capable of meaning both anything and nothing. Therefore it should not, but does, surprise you when nothing—nullo, too—comes of your theft.

Back at the hotel, the man’s haul is a saddening ten-thirty; the next morning, before your nine-thirty pickup for your eleven-thirty flight, you return to return his earnings, now supplemented by your own remaining euros, and find him gone. No one—nessuno—is there. His body, you find, has gone the way of his head: the matted trench coat is neatly folded, the hat set atop it, like a bow. At this gift’s side, a twisted coathanger weighs down a set of instructions written on sun-shriveled cardboard, which, using Google Translate, you read.

Inside the coat it is hot, claustrophobic, damp. When the pale-skinned children of Venice’s tourists see you, they scream, catch up, clutch at those they love. The city’s local olive-toned juveniles only giggle—ridono solo—in Italian it takes you too long to understand. The former you pity; the latter you resent.

Sometimes you see another who reminds you of another you once knew. But these moments grow increasingly rare as your convalescence prolongs, and soon stop altogether. Isolated within his—now, your—trench coat, you think, incant: One day another will take your place. Everyone’s homes, in the end, are inhabited by another. All escapes are temporary. Minds go missing—le menti scompaiono—safe in the belief that they will one day be found.

Colin Lubner writes (in English) and teaches (math) in southern New Jersey. His work has either appeared or will appear, temporally speaking. He is keeping on keeping on.