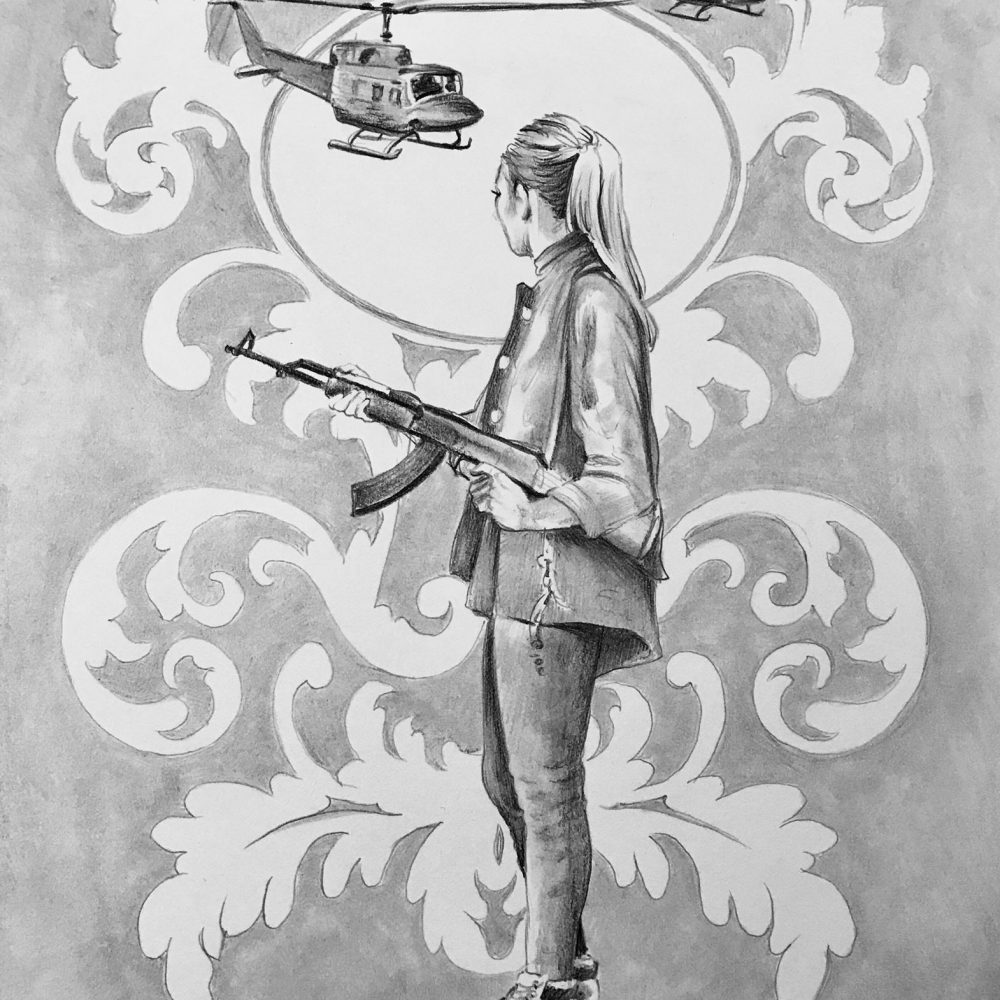 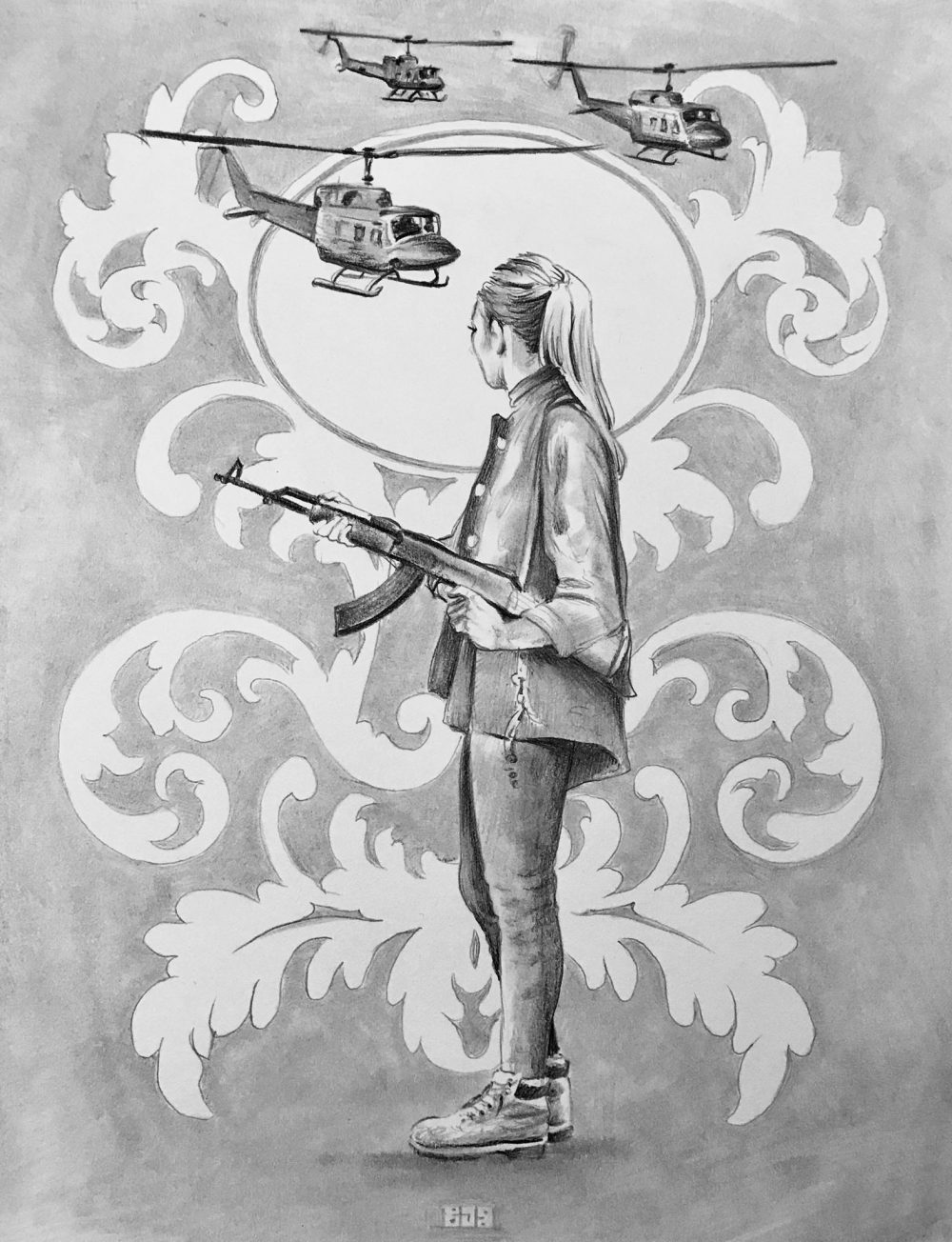 Sirens, dogs barking, howling, blinding light as Liam flips the switch. He stands in your doorway, the snot plugging his nostrils still green—infection.  His medicines blockaded since the Mississippi backed up.

—exactly the way your baby brother Kevin did during thunderstorms.

Someone pounds your front door, Clydine making sure you’re up. You grab your mask off the night table and fit it over Liam’s face. “Let’s make a fort!”

Fling your quilt over the kitchen table. Toss all the pillows from the couch underneath. Liam should, of course, hide in the cellar but that was Aidan’s project for next week; it’s still damp and scary down there.

Aidan’s with Clydine’s husband marching in Washington for the right to plant your own crops. But you can fight all you want — in Congress, at the polls, on social media — with two representatives in the house to California’s 53, it’s bullshit until you fight with a gun.

You give Liam the box of left-over donuts from last Tuesday when you and Clydine (finally) drove your F-150 to Vermont, back when you didn’t even know AK-47s were Russian.

AK-47s beat the American versions, because they don’t stick, they’re easy, and wasn’t that how government was supposed to work? By the people, not by California’s and the Mississippi’s refugees telling Maine what to grow?

You don’t blame California, you get that they’re hungry, but who had all the cars? All the smog alerts? Who paved their arable land? Who has the money, even now, to let the market work it out? Eminent domain your ass. Russia (Russia again!) has grain to sell.

You open your laptop, fire up “Dirt Man,” Liam’s favorite. Liam sucks his thumb. He’s too scared and confused to argue. Thank God. Thank God for that. You picture, a phantom Liam hanging on your leg. It would be impossible.

That sound is helicopters. You have to get outside.

“All the donuts and screen time you want, Buddy! Just stay under the table!”

You pull Aidan’s barn jacket over your pajamas, step into your work boots and, picking up the 47 that loads like a Pez dispenser and is exactly Liam’s birth weight, you step outside. You cock it.

Kevin and his friends squealed for cover when, lacking a gun, you squirted them with your legs-back Betsy Wetsy.

Damp air whips your face. The first Helicopter crests into view. Is it alone? Doing recognizance? Warning? Is that Kevin? No. He’s stationed in California; he wouldn’t be here.

There. He wouldn’t be there. Not here. A patch of sky with a helicopter is an enemy patch.

Kevin spinning on your lawn, arms out, trying to take off.

The enemy patch is inky indigo. The helicopter bobs, an lazy fly. Rain clouds roll in. Dawn any moment. Your boots stick in the mud. They chose a wet day for this. Smart. 200 feet up the hill, you can see the trucks flooding 95 and, back over your shoulder, the kitchen window.

One hill over, Clydine climbs atop a step ladder. For once, you don’t mock her, silly as it is to pretend three feet make a difference. You understand what it takes for her to shoot. If the step up makes her feel in position or as tall as her husband, more power to her.

Kevin jumping off a ladder —splash!— into the Wilson’s pool. The ladder falling in after him with an even bigger splash, scaring Mrs. Wilson so much that she installed a diving board the next day.

They sent Kevin’s regiment to Idaho to manage the refugees from California and Texas, he’s far away.

Dandelions, the very thing Roundup was designed to destroy and the one thing it can’t kill, dot the grass like tiny suns.

The clouds rolling over the hills look like a giant wave.

I can see that, says Kevin.

Now it’s locusts, helicopters, shooting genetically engineered seeds into the earth followed by a second wave dragging a veil of poison to choke everything else that tries to grow. You’ll be eating dandelions. You aim your gun. You’ll be washing dandelions. You release the safety. Boiling dandelions. The seeds are patented, it’ll be illegal to pick them. A seed pellet smarts your cheek, another breaks the skin of your knuckle, but it won’t kill you. Not today anyway.

Your stomach seizes before you smell it. You pull the collar of your pajama’s over your nose to block the fog.

You and Kevin playing Jesse James-

Knowing it’ll do no more than Clydine’s step ladder.

But, maybe the step ladder does help. Targets can be missed by inches.

You should have brought a ladder.

Your tongue tingles. You hope Liam’s keeping his mask on. Don’t they know he has asthma like Kevin did?

The bang-crack of Clydine’s gun. Don’t they know there are babies here?

You open your jacket. You don’t care if you can bring them down or not. Let them see that you’re a mother in pajamas, a mother named McSherry whose foremothers knew what growing potatoes gets you.

The July Kevin suddenly dwarfed you on his way to 6’ 4.” The pool full of boys and energy.

You beat everybody to the quarter at the bottom of the deep end.

You clench your teeth, making a second filter against the poison that will wreck Liam’s lungs.

You surfaced, gulping for air.

A post nasal drip of Glyphosate tingles down your throat. Another report from Clydine’s gun.

Kevin drove your head under.

Wait, was that a crash in the kitchen?

Your lungs filled with water.