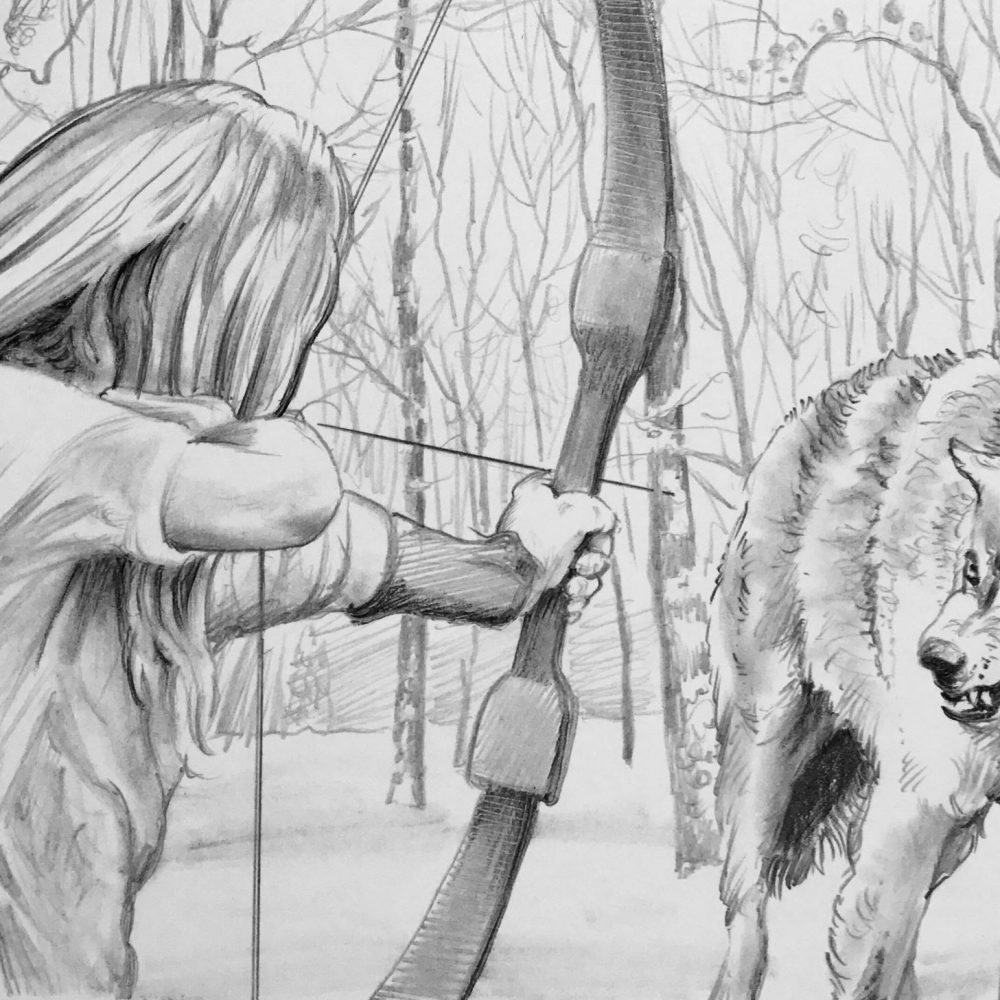 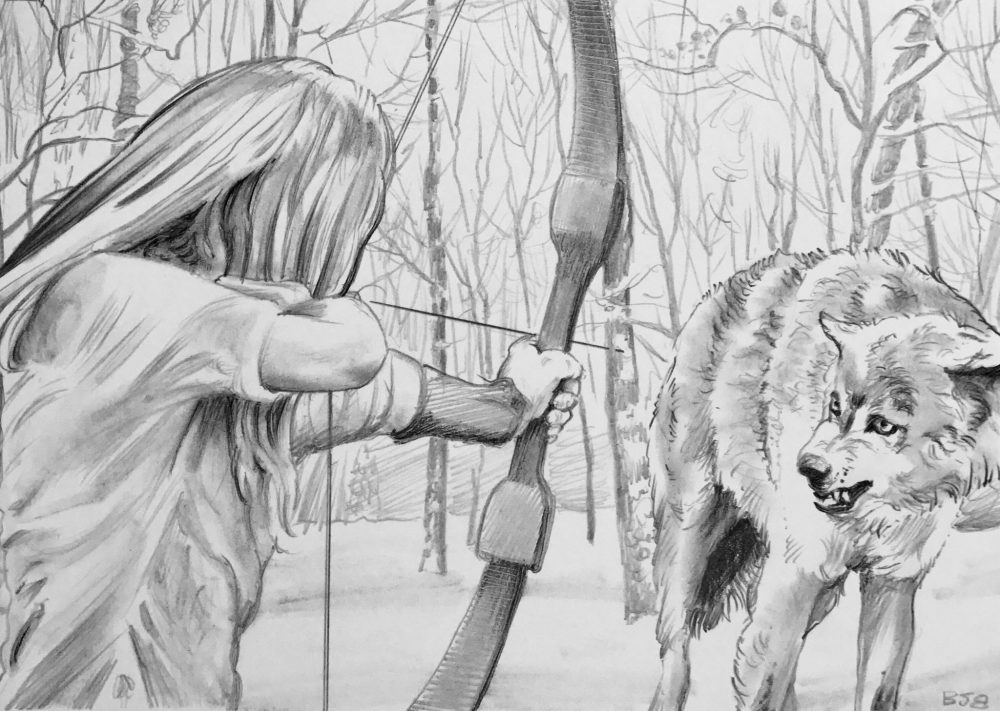 Every year since my mother died we hunted the wolves. All of us operating as one body, with my father at its center. We marched out in the darkness that came from the trees, carrying what weapons we kept by our doors and under our beds. I watched my father’s body become steel, his eyes forward. Cold and strong, we never saw him hesitate, even as the shadows began to stretch. Father was our leader. He was the one who helped us beat the wilderness and its shadows away from our village to forcefully carve out our place.

We had wrapped ourselves in furs to keep the snow from soaking ice into our limbs, but I think the cold was starting to seep through our cracks.

Hold fast, my father said. The wolves do not mind a chill.

Without him, we would be lost.

Father told me I reminded him of mother when I hunted. She had favored the bow as I did. I could see the spark of bitter happiness in his pupils whenever he talked about her. I did not tell him that that’s why I used a bow. It was not for me. It was not for my survival, but for my mother’s. And, perhaps, for my father’s.

It was during a hunt that my mother died, father said. She was a wild thing, he said, and she would move through the forest as if it were her home. He said she seemed her truest self within it. All I can remember of my mother was how she spoke of the forest, and how it seemed in those moments as if the sun itself shone from her face. On the spring day she died, she had run off by herself, bow still strapped to her back. She only said, “I see it,” before the trees had swallowed her away. My father said he tried to chase after her, a shard of fear nesting in his spine, but the forest kept him back, reminding him he was not welcome. It was only when she cried out that he and the other men were able to find her. The wolf had gone for her throat and as the hunters approached, it ran and was swallowed again by shadows.

I remember their return. I remember in the days after, with my father’s barked orders, the men of our village chopped down the few remaining trees that surrounded us. So the wolves couldn’t hide, they said. The chaos would be brought to order. I watched the last tree as it fell. It had fought, I think. The creak it made against the axes echoed through the village.

I found myself shrinking as we walked along the path my father made—the weight of what I had been made to fear finally settling over me. The other hunters, on their own paths in their own spaces, were invisible in their noiselessness. The only sound was my feet crunching in the snow. I hid in the shadow of my father, careful to not step too quickly ahead of him. He had warned me to stay behind him and out of his way.

I did not know how silent wolves are or can be. There was nothing but a blur in the corner of my eye before my father threw his arm back to shove me down and the wolf shoved him onto his back. I watched, frozen, as the wolf snapped its jaws, my father shielding his face with one arm and grabbing for the knife he kept at his hip. In my next breath, he had it. And on the next, the knife was buried to the hilt in the wolf’s side. It yelped and leapt away—its chest heaving with the life that now spilled from it.

Father dropped his knife into the snow and did not get up. I crawled to him, fear keeping my legs from pushing up. His face was fraught with pain. Then I saw the gashes in his chest. The wolf would take my father too. It was then that I felt a different, bottomless kind of fear. I felt my feet lurch forward. I saw the trail left by its blood and ran.

The wolf was slowed by its wound, and its blood kept it from hiding. When I found it, it turned to me, a tree at its back. I had an arrow leveled at its face as it growled and gnashed its teeth. But still, it did not lunge. I stared at it, straight into its yellow eyes.

I could feel them weighing my worth and my fear. And for one impossible moment, they looked brighter than the sun. They were beautiful.

I lowered my bow with numb fingers. As I did, the wolf sank heavily into the snow. I watched the sun in its eyes dim into dark.

I wondered how much I would fight.

Rowan Lucas is a graduate student at Virginia Commonwealth University working towards obtaining her Master of Arts in English. Her creative work has been published by her university's Amendment journal.