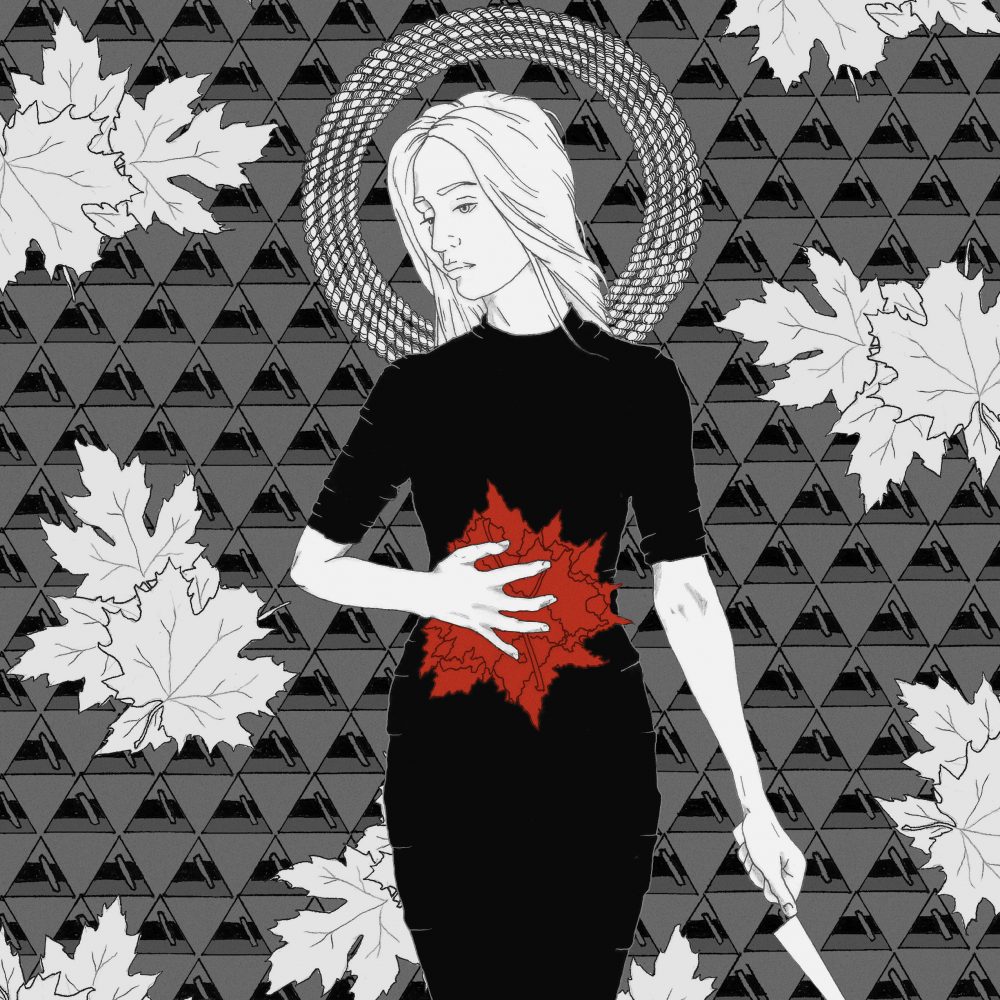 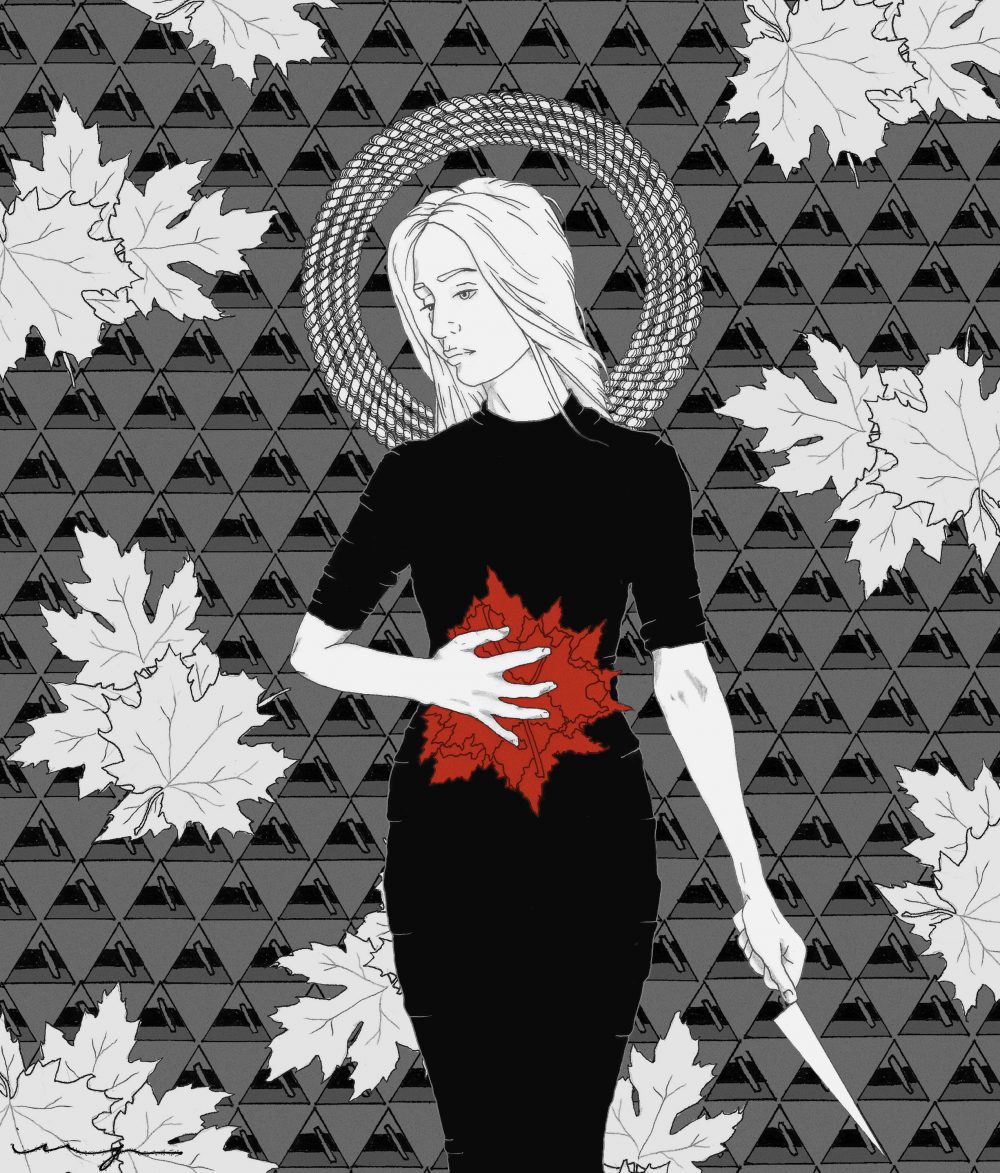 Kirby loved the smoldering red of fall turning treetops into torches since she was small. She didn’t like it in the moment, age 27, as that same color globbed out of a hole in her stomach, a knife the previous tenant. This was the problem with fall in Sinking Rock, New York. This is what happens when you stick “Murdertown USA!” on a billboard a mile from the town limits and show off a massacre site like a tourist attraction to a nation of Halloween enthusiasts.

The Knife Man of Maple Lane

Now she was staring at a bowl full of Halloween candy, held captive by someone she could only guess would go down in history as the Candy Corn Killer. He’d hidden his face in an uninspired ski mask and gave an untrained thrust, right into her stomach. The was knife too shiny not to be brand new. She was the first. Was it good for you?

Her father had been one of them, the Handyman Killer. He’d been quick and easy to nab. It wasn’t about the chase for him. It was about pounding nails into painful places and not caring to cover his tracks when Mrs. Khan and Mr. McGunnigul both ended up dead after he showed up to hang a shelf and fix a squeaky door. He only killed three people before he ended up under the glare of a death penalty. Only three. Only three full lives gone. The low number had lost its meaning on Kirby years ago. A collection of what might have been three hundred years of life got smeared on her father’s plaid shirt.

Now here was Kirby’s comeuppance for having the unfortunate luck to be the spawn of a serial killer in a town that breeded them, kept them as mythology like baseball cards and superhero names.

“You want some candy?” he’d sneered into her ear as she walked home from the McGhee Halloween party.

Jesus H. Fuck. She rolled her eyes. A knife pressed into her back. He was a college student, no older. His frame was wiry but he was tall. He’d fall on her like a tree and keep her pinned.

He pressed harder and told her to shut up when she snorted. He pushed her along. She asked if he had Maltesers. That’s when his fist replaced the knife and she felt the cold autumn air of the night rush to fill the vacuum in her lungs.

A college student up from the city, looking for sick kicks in a town that produced serial killers like high school football stars and blue collar workers. A girl, in turn, produced by a serial killer. An October night setting the scene for them all. Did this walking bargain Halloween costume know who she was? Would he let her go? Would he take a bigger trophy from her? The Home Depot rope he’d tied around her wrists scratched at her skin like a pet begging to be let inside. Kirby wondered if there was latex in the threads. She’d breakout into a rash. Then he’d get an earful.

When he returned, he didn’t talk. She preferred that. She didn’t know if she could handle his chopped up attempt at slasher film dialogue. She wondered if her father ever spoke to his victims. If any of the town’s resident real-life slashers over the years developed villain speak to whisper into the ear of whatever victim was tied to a chair or a bed or the back of a truck.

Somehow she figured they didn’t. Real killers didn’t need to tell you that. They didn’t need a show either. They just needed one good knife.

Which brought her back to the leaking wound in her abdomen. Her fingers were going numb and goosebumps were pebbling up across the skin of her arms like a wave. She never imagined blood loss would be the way she went. She’d hoped for a parachute failure in a skydive or to be that one in one thousand who got thrashed by a shark when visiting the Jersey Shore.

He was giggling and she was rolling her eyes. What he couldn’t have known, when he untied her and walked her over to his table of cheap torture instruments, was that when her father was teaching her to carve a Thanksgiving turkey what he was showing her was ligaments, places to tear, things that hurt when they were severed. Because he was a messed up fuck. He couldn’t have known she knew the name and job of every single one of those jagged knives and hooked devices on the table.

He couldn’t have known that, as that same deep color of fall fell out of his neck and then out of the tendons now torn in two at his ankles. He couldn’t have known because he was a tourist in Sinking Rock. He was looking for the kind of quick, cheap thrill Manhattan trust fund kids locked away in their spoiled hearts. They were Patrick Bateman bitching about business cards and a white male crisis. That was the trouble with tourists in the fall.

Murderville was her home. She wasn’t going to belly up to the bar at Witch’s Brew without at least saying she got a knife in too, for all the bleeding she was doing. Around here that would be like a hunter getting run down by a deer. It was just bad form.

Melanie Moyer is an author currently living in Philadelphia, PA. Her debut novel, The Rules of Me, was published April 2018 through Waterton Publishing. She's had previous work published with Ghost Parachute and is a contributor at Popsugar. She's an avid horror fan and pizza maker.

Mary LeBlanc is an artist who lives in Orlando, FL with her partner, daughter, and fish.