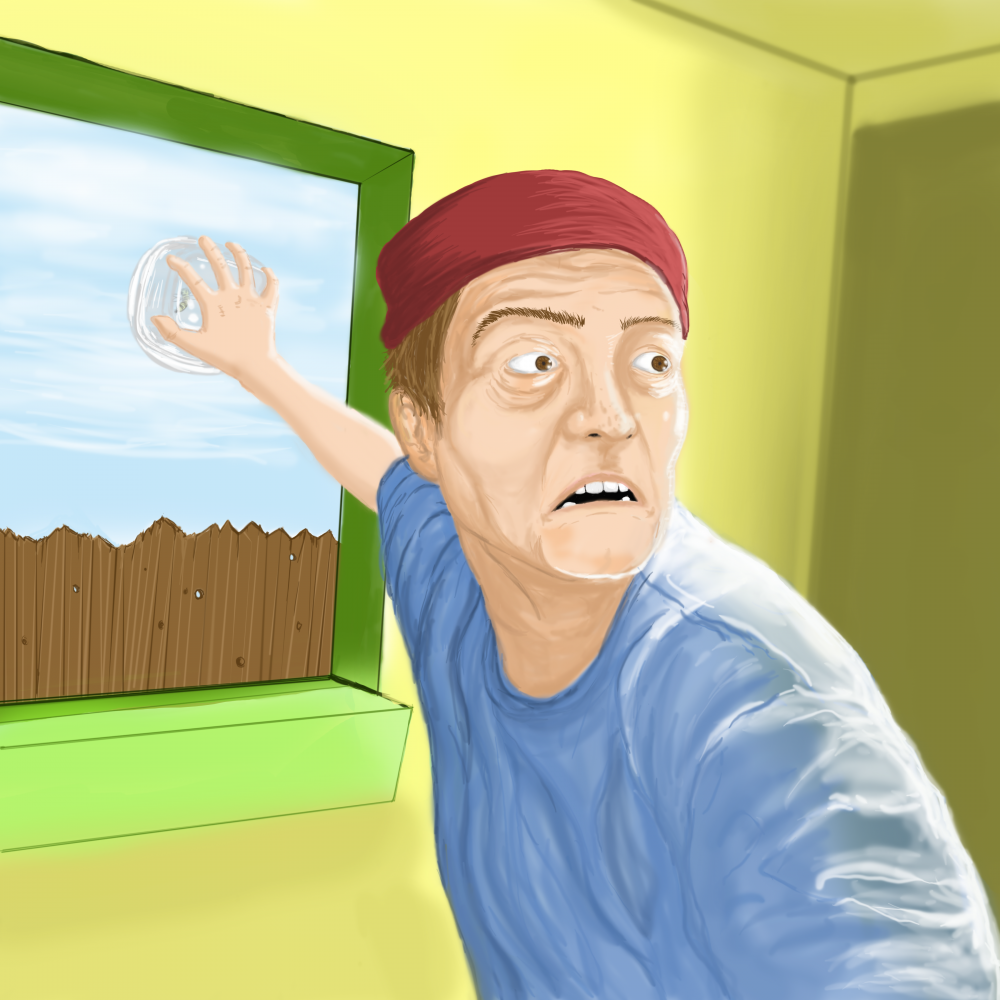 The husband stands at the window with a wasp trapped in Tupperware while, in the kitchen, a teakettle screams.

How he’d gotten himself into this predicament was this:

The husband had spied a wasp circling the house. He wasn’t allergic, but his wife was. Stung, she’d have thirty seconds to get the EpiPen into her leg before her throat swelled shut.

Luckily, his wife was not home. The husband sat at the kitchen table, a book in his lap, waiting for water to boil for tea. The wasp buzzed from kitchen to family room to kitchen again. The husband stood, book in hand, and the wasp flew to the family room, charging the windows and bumping the walls.

In time, the wasp landed on a window. The house was old, the windowpanes thin. To swat the wasp might break the glass. The husband waited for the wasp to lift off, to settle on a surface the husband could smack with the book. Wasp crushed, the husband would dispose of the body, the stinger. In this way, he would save his wife.

Except that the wasp would not budge.

The clock struck four in the afternoon. Soon the wife would be home from the elementary school where all day she helped children become better human beings than they were, or, at the very least, she kept them from becoming worse.

But, what if, right then, his wife came through the door? What if the wasp lifted off and landed on her?

The wasp had to be stopped, but the wasp would not leave the windowpane.

The water on the stove was not yet at a boil.

The bowl buzzed in his hands like a vibrating phone.

Then the kettle began to sing.

The kettle’s song was pleasant. At first. After five minutes, the sound had grown less pleasant. But the husband tolerated it. He had to. After all, he was trapped.

For, you see, the husband had not thought to bring the lid. He’d not thought to prepare a sheet of paper or cardboard strip he might slip in the seam between window and wasp, and, in this way, trap the venom inside of the bowl. To release the Tupperware from the window, now, was to release an angry wasp into the house. And, once released, if he could not find the wasp, what then?

What if the wasp went into hiding, only to emerge with a stinger for his wife once she’d gone off to bed?

What if the wasp waited beneath a bar of soap, ready to sting when she washed her face?

What if the wasp waited in the shower? His wife would not have her EpiPen with her in the shower. Did epinephrine auto-injectors even work in the shower? The husband didn’t know much about the devices, but he was reasonably sure they did not.

No, the husband could not release the wasp from the bowl. This would be unwise, unsafe. Soon his wife would walk through the door. Soon she would pull the kettle from the stove and the lid from the cupboard’s Tupperware pile. Soon the purgatory of wasp buzz and teakettle cry would be complete.

It was only once the clock on the wall read quarter past four, once he’d endured fifteen minutes of the teakettle’s screams, that the husband began to wonder whether the parent-teacher conference his wife had mentioned—a conference with the parents of a student working, perhaps, less diligently than most on becoming a better human being—whether that meeting was tomorrow, as the husband thought he remembered, or whether the meeting was, in fact, that day.

Were it today, the husband had a dilemma. The conference might go another hour. The husband’s back was cramping. His fingers hurt. But the real problem was not the husband’s discomfort (mild) or the ringing in his ears (at this point, severe).

No, the real problem was that the kettle was literally losing steam. As in, much of the water, by now, must have boiled off. Then there would be only sizzle, followed by the scent of a kettle bottom burning. Then the house would fill not with steam, but with smoke.

How long could he stand there, after all, the husband, Tupperware in hand?

For, while the wasp might sting his wife walking through the door, were the odds not better, and growing better by the second, that their house might soon be consumed by flames? That, should he choose not to drop the bowl and remove the kettle from the stove, there might be no doorway for his wife to step through, no home for her to come home to?

Say his wife was saved from the wasp’s sting. Would she love him for letting their home burn?

Say the husband saved the house but lost his wife to the wasp. Would he ever forgive himself for her death?

The husband would stand, will stand, at the window as long as it takes, even as the house burns around him and the Tupperware fuses to the palm of his hand.

The wasp rattles the bowl.

And, right then, mercifully, in the driveway, the chirp of car doors being locked. A homecoming. His wife’s key in the door.

There are tears in his eyes.

Soon, in the entranceway, his wife will set down her things. Soon she will see him. Soon she will take in the sight of this man who for only a couple of years now she’s loved. Soon she will stand, a foot in either room, and see the kettle, the wasp, and, just seeing, she’ll know.

She will understand. Or she won’t.

And, understanding, or not, she will love him. Or laugh.

Knowing which makes all the difference.

What happens next means he must love her forever, or forever doubt her love.

So, he waits. The husband waits for the open door. Waits for rescue. Waits to see whether his wife’s love, as he sees it, will pass this test, and whether he, in turn, will love her back.

David James Poissant is the author of The Heaven of Animals: Stories, longlisted for the PEN / Robert W. Bingham Prize, winner of the GLCA New Writers Award and a Florida Book Award, and a finalist for the L.A. Times Book Prize. Poissant’s stories and essays have appeared in The Atlantic Monthly, The Chicago Tribune, Glimmer Train, The New York Times, One Story, Playboy, Ploughshares, and elsewhere. He teaches in the creative writing MFA program at the University of Central Florida and lives in Oviedo, Florida with his wife and daughters.

Felix Roman “baddietrash” Sanchez is an artist currently residing in Portland, OR. He does traditional and digital art and doesn’t like labels. He is open to comissions. Check out his instagram @baddietrash