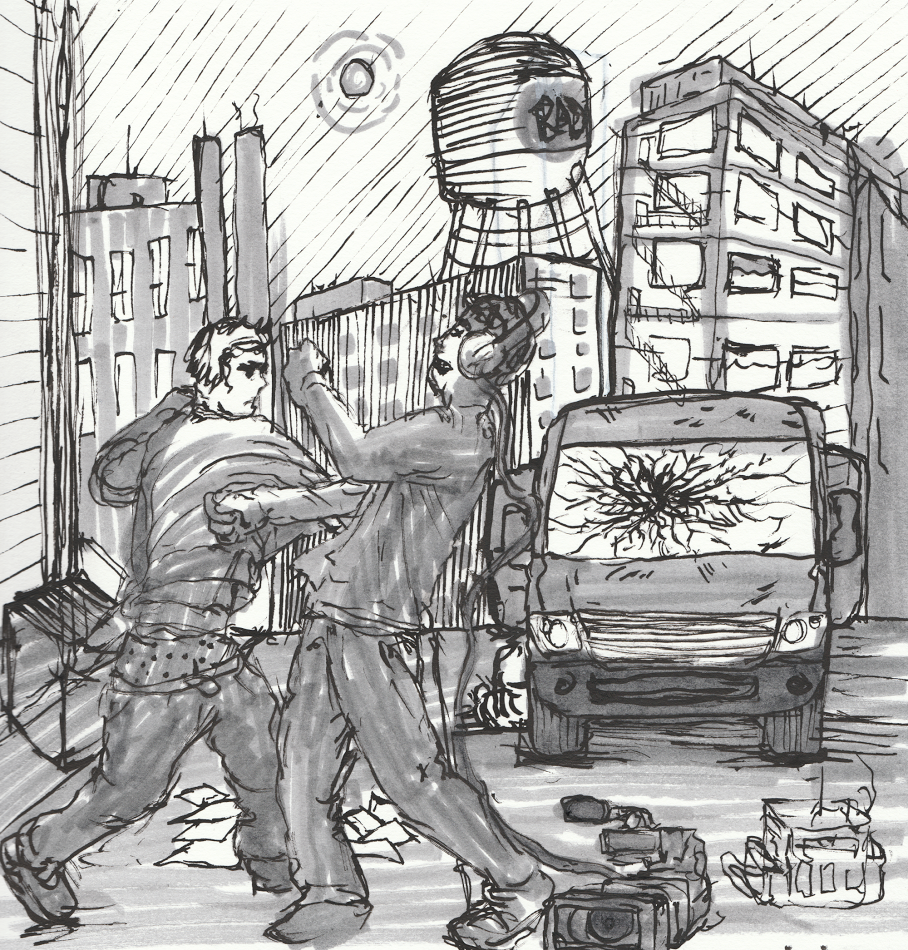 In the movie Fear and Loathing in Las Vegas, Benicio Del Toro tells Johnny Depp that an adrenaline gland will take him higher than he’s ever been. That’s why I had gone through the whole scam with the beer pong league for medical doctors last week to get one, and why that Tuesday in August I was finally ready to crack into the Mason jar on the top shelf of the fridge and have a taste. I sautéed a piece about the size of the palm of my hand with garlic, onions, mushrooms and some red wine, put it on a bed of spinach and was about to slice into it when Corbin knocked once and rolled into my apartment with a skateboard in his hand.

He had a fur hat on, kinda like one of those Russian hats, but it was brown, and he was going on and on, a mile a minute about this shady dude he had seen in the parking lot scoping out cars and shit. He said the guy was a crony with a tattoo of a red apple on his neck. I told him to chill because I wanted to try the gland, even offered him some, but when Corbin wants to rumble, there’s nothing I can do, the fucking guy loves getting into it, always has. I saw him punch his neighbor’s dog in the face once for shitting on a sidewalk. Dude’s crazy.

Anyway, I didn’t even get to taste my lunch. Instead, I threw on a pair of slippers and followed Corbin down the cement stairs and into the parking lot where I finally got a good look at the guy he was rapping about. The guy must have been a marine; he had a shaved head, wore jeans and a red flannel, and he was yoked as could be. He was creeping up behind a green Rav 4 and kind of mouthing something to himself. I thought he was singing along to some song because he had one earphone in when we rolled up on him. Corbin hit him up with some shit like, “Hey, why you fuckin’ with my whip?” which sounded ridiculous to me not only because there were actually a man and a woman in the Rav 4 right then, but because Corbin freestyle raps in his free time, so he’s always on this gangster shtick. And we live in a fucking farm town. The guy bucks hay for a living. It’s stupid. It’s like the dudes who sing reggae in fake Jamaican accents.

Well this dude, the dude with the apple tat, didn’t hear us, so Corbin repeated his stupid line again and grabbed the guy’s shoulder. When the guy turned around to look at Corbin, Corbin wound up and swung and hit the guy in the jaw with a big right, dude fell against the car, and we both started kicking him. I remember thinking it was a good thing Corbin left his skateboard upstairs because he would’ve gone after the guy’s face with it. That’s when a big black van skidded into the parking lot and a bunch of weird dudes with cameras and boom mics and all this other shit spilled out and started yelling and screaming at us to stop.

It was a fucking reality show. No shit, and Corbin was getting live with that fur hat on; I mean he ripped the boom mic out of some random guy’s hand and started wailing on one of the cameramen with it. Then he threw this big ass camera through a random apartment’s front window. I tackled some little bald guy with a clipboard, and while I was punching him down around the van’s rear bumper, I felt my shoulder slip out of the socket, so I just kind of laid on top of the guy, pinned him down and took a look around to see what was up.

By this time, the dude and the girl that were sitting in the Rav 4 had hopped out of the car, and the girl was kneeling next to the guy with the apple tat, cradling his face with her hands. I think she knew him. She had mascara running all down her face and her dude or whatever, this skinny engineering type fucker with glasses and gelled hair was on the phone. I knew he was calling the cops.

I kinda felt bad for apple tat, but I knew the cops were on their way, so with my one good arm, I grabbed Corbin, who was busy ramming some piece of equipment into the windshield of the van, and we split toward Madrone Park, about a quarter mile from my house. I was running in unmatched socks because my slippers had fallen off while I was kicking the marine. My shoulder was killing me, so when we got near the playground, I got down in the grass. Corbin braced my arm between his two legs and put it back into the socket. I could’ve kissed him.

After that, we bullshitted on the swings until it got dark, and then we stealthed it back to my apartment where I iced my shoulder with a bag of frozen blueberries. I thought about going to the ER, but Corbin talked me into reheating the adrenaline gland on the stove and splitting it with him instead, so we did. It was good. We were flying. I put Coltrane on Pandora, and we had a one-arm pushup contest to “My Favorite Things.”