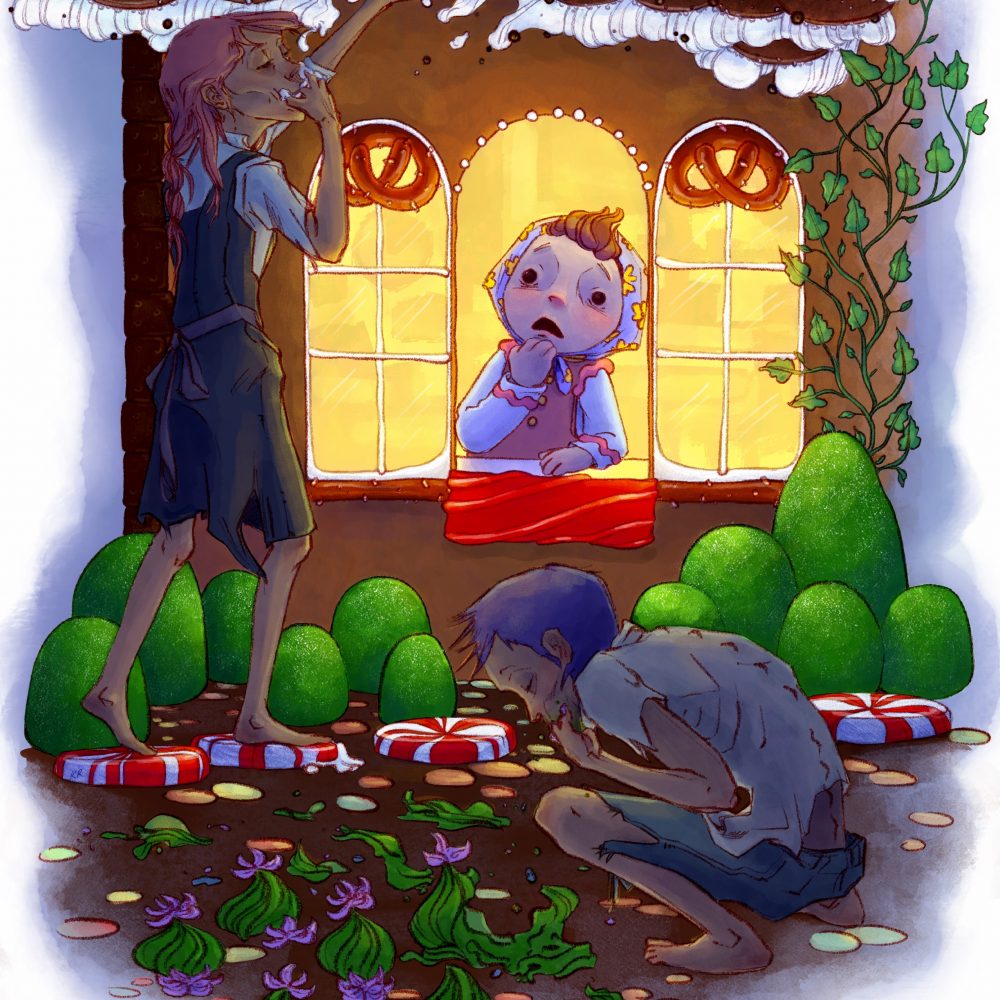 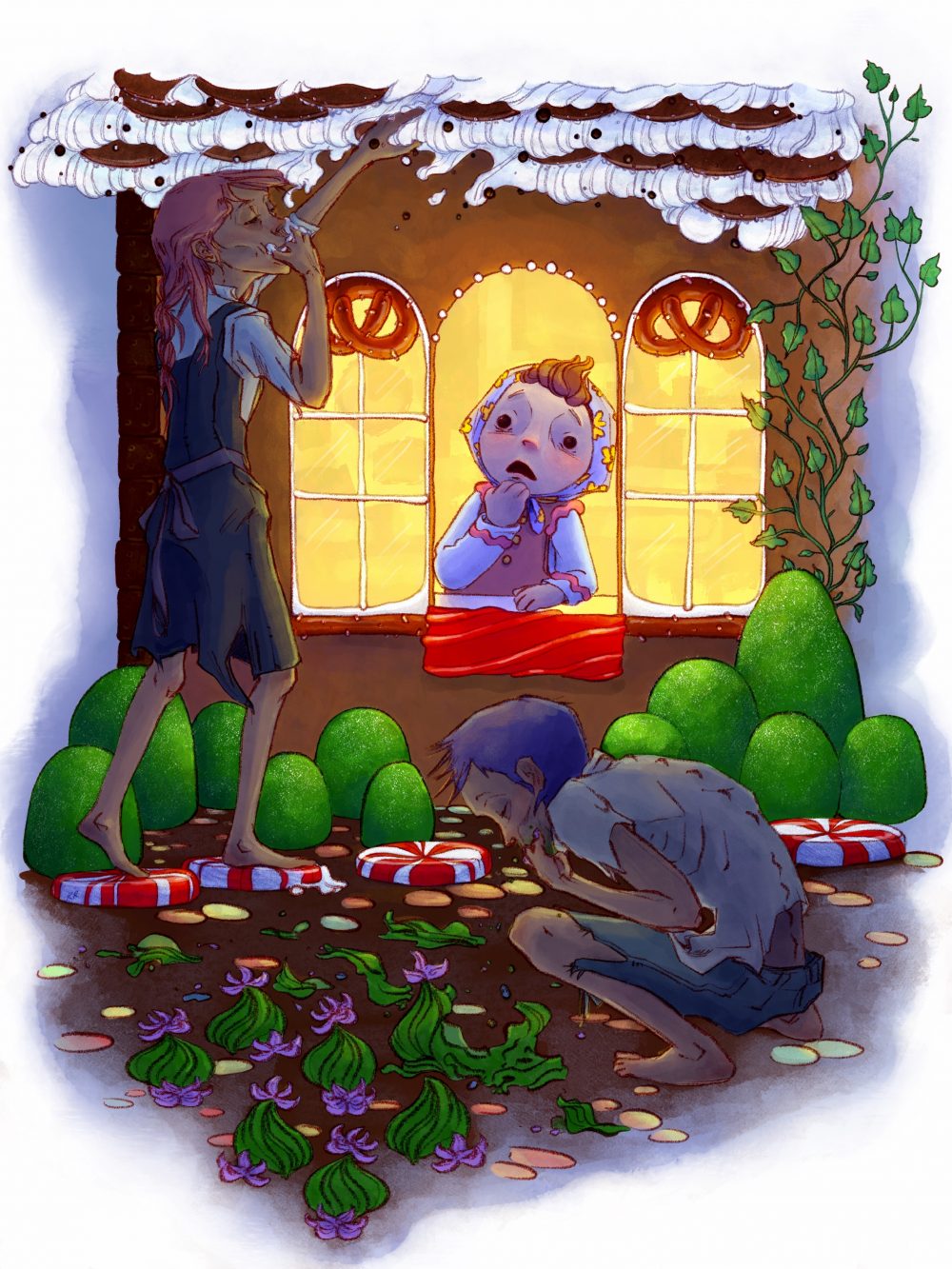 The delights were out again digging their fingers into the grooves in the bark of the trees, licking their lips with grubby tongues. They had been lurking at the edge of the woods for days, whispering, rustling, causing frenzy among the blackbirds. Now, they were on the move. The fuzzy shapes of them darted from one sugar-pane to the next.

Marzipan gazed through her windows. The hole where her heart had been, wept, dewing her only dress. The delights would give up eventually, just like they always did, first they needed to stuff themselves, tearing off chunks from her cottage, pushing the chunks into the slits in their faces, their mouths, chewing the chunks with their sharp, hard teeth, swallowing the chunks down into the dark corridors of their bodies. They grew themselves this way, from the inside out. And there it was, the crunching of their shoes grinding the granules off the gumdrop walkway. They stop to nibble on the violet sugar-flowers in her garden, the crisp petals.

Thump! One of the delights threw itself at the gingerbread door. The other clawed the royal icing siding. Then the pull of them climbing the fondant ivy that twisted and twined up the side of the cottage. Feet scraping. Thudding on the chocolate nonpareil roof. The yank of shingles being torn off. The munch and yawn. The delights were so hungry. They were in the walls, clambering down the chimney. None had made it this far before. They had never been this smart or this hungry. They usually gave up when they couldn’t get in through the door.

Marzipan had no reason to ever leave her house. She didn’t eat meat, or fish, or berries. Water would only dissolve her, sun only melt her, animals only nibble her, people, only hunt her, hurt her, cut her, slice her, sell her for a quarter a piece and laugh while they did so. What a funny creature! How did she ever come to be? My, is she delicious! The only one who once loved her told her that, and since the one who once loved her would never again walk through that door, Marzipan sealed it with hot caramel that cooled fast, hard, and complete.

The delights dropped down the chimney, into a heap, one on top of the other onto the hearth. Crumpled little boulders. Nothing delightful about them in the least. Their clothes were a hang of tatters. Feet naked and filthy with mud from the forest. Dried blood sutured their deep scratches.

Marzipan drew out a long copper spoon and poked them, stirring them from their daze. They dropped from each other and blinked up at her, with eyes the size of walnut shells, their fleshy faces, covered in chocolate.

Marzipan poked one of the delights in the belly with her spoon but found no resistance there.

The other delight rolled out from under her brother, stood up, shaky as if she stood on shifting pebbles, and lifted the skirt of her dress, revealing a large hole where her stomach should be.

Marzipan drew the bowl of the spoon up against the girl’s cheek.

“We could smell you from the other side of the river,” the girl said.

Marzipan unbuttoned the first three buttons of her dress to the hole where her heart had been. “I could feel you from your house, could feel her strike you…take the bread from your hands…throw you from, the…”

“Window,” the boy said. He pulled a chunk of cookie brick from the hearth and slipped it in his mouth.

Marzipan hadn’t used her voice in years. It was dry. Stuck to itself. “…The window.”

“He was almost to the house. He said we stole the bread,” the boy said.

“He was our father,” the girl said. “He never gave us any. He said we cost too much. We were starving.”

“He was going to make us pay. She saved us,” the boy said.

Marzipan felt all of them, each child yelled at, beaten, ignored, abandoned, left hungry, neglected, unloved, hated. There were more, ever more on their way, right then, right in that very moment. The weight of a crow’s caw from just outside fell dark upon her.

“Can we stay here? With you? We could love you. We are really so delightful!” the girl said. She pressed her palms together like a prayer.

“We are lovely,” said the boy.

It was not their fault.

But they were only hungry.

You are so delightful! Marzipan’s mother squealed the day she made her. She spun Marzipan round and round the cottage. Such a delight! Such a delight!

That was the first time Marzipan felt it, the hunger, the holes she was born to fill. Love only mattered for a little while. She felt the man coming through the woods that day, and knew how her mother would use the knife, how her mother would run from the cottage announcing, “The monster is dead!” with her heart in her mother’s hand. And she could feel it, years later, her mother drawing her heart out of dark place, in the cover of night, licking, licking, licking.

Marzipan dropped her body to the floor like a spoon, held her arms open for the boy, for the girl, the delights, and as they licked the tears from her heart, as they melted her marzipan over their tongues, and munched the almond brittle of her bones, they said, “We love you, we love you, we love you.” It was the best they do could.

Caroljean Gavin's work is forthcoming in Best Small Fictions 2021 and has appeared in places such as Milk Candy Review, Barrelhouse, and Pithead Chapel. She's the editor of What I Thought of Ain't Funny, an anthology of short fiction based on the jokes of Mitch Hedberg published by Malarkey Books. She's on Twitter @caroljeangavin.