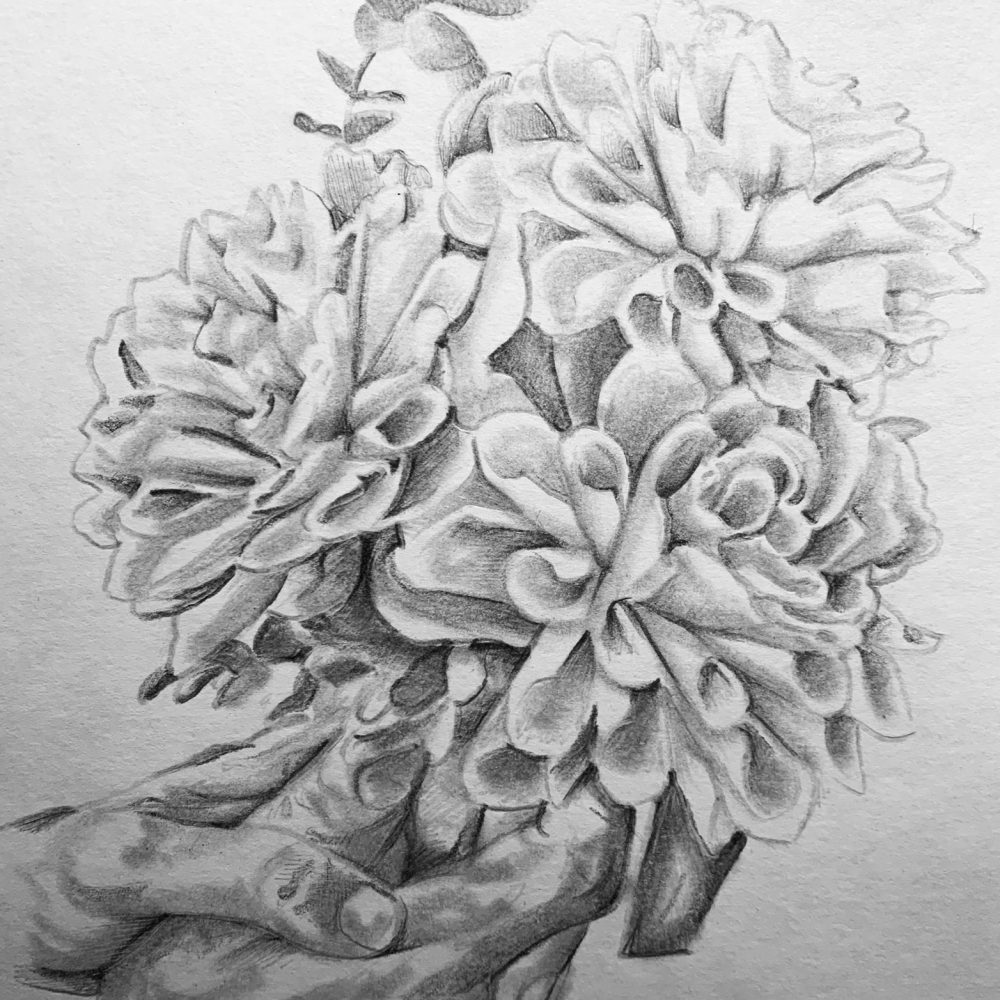 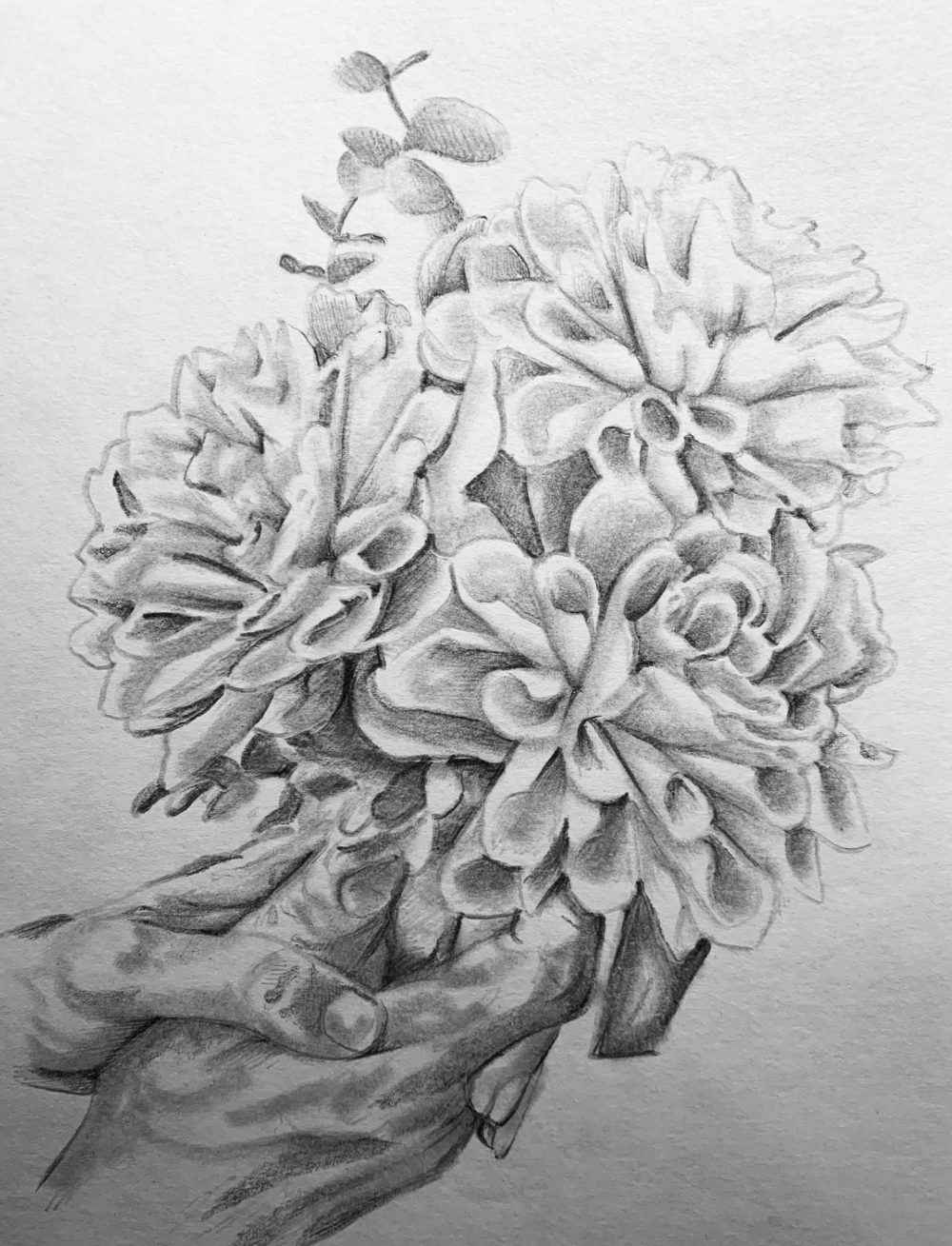 The cord’s too short for a third loop, so she tightens and settles for two. The skin on her roommate’s throat hangs so loose it swallows the cord. Her fingertips ache to travel the length of the sternomastoid muscles to where they attach to the base of each ear, then past the bumpy tunnel of windpipe to the clavicle and sternum. To wedge under the shelf of collarbone, to tug, or press, to concave what’s meant for convex.

When she was younger, she could give each one the appropriate time and patience they needed. She’s too slow now, and someone’s always looking, or about to. Her fingers find the crinkled waistband of her roommate’s diaper brief, slip between skin and cotton, pause at the smooth skin that was once coarsed by wiry hair, which is where they are when the door opens and the room collapses into light.

She shoves her fingers deeper into the diaper while the caregiver unwraps the lamp cord and lowers his ear to check for breath. She watches her roommate’s chest, imagines the moment where she’d been able to pull off her nightgown, and that the roommate managed to form fingers into fists. It’s been so long since she’s had to fight for it.

The caregiver leads her back into her own bed, tucks the sheets and blankets under the mattress in quick stabs. Neither shock nor disgust saturates his face as he speaks low into his walkie-talkie, then positions a chair next to the roommate’s bed. She rolls toward the wall where fingernail-wide strips of yellow grid the white wall.

She carves the tracks with her own fingernail, thinking of stories about prisoners chipping, peeling, and tapping away their stone cells, inch after inch, until decades later they stuffed a jumpsuit with pillows to look like a man and crawled through the tunnel. Drywall is much easier to carve away, she knows. Her nostrils and throat clog with its remembered residue. The trick is to hide the progress from what wants you there.

She tucks her feet close to her body. Their cold clam stickies the sheets. Once, sleep came sweet as sugar afterward, but tonight she can’t snag the memory into slumber. It’s like the blotch from looking at the sun too long dissolves before you can see it. Other memories slip in while she’s distracted–her father stamping out a cigarette, the coil of smoke graying the snow-white sky, the stench of scorched skin.

Her roommate calls out, and the caregiver envelopes her hand with his own, promises he’s right there, everything’s okay. The roommate won’t remember anything about this night, at least not in a way she could articulate. The terror will be preserved, sticky her neuropathways, ensnare her from when she’s had a split-second of hope.

Her husband will be called in the morning when he’ll do his best impression of outrage at the suggestion. Of Who-do-you-think-you-are-talking-to? When he visits, he’ll say they’re nearly out of options. I didn’t plan it, she’ll promise. I was just dreaming in my own bed, then I was in hers. He’ll hold her hands, rub them until he finds the stitch of tension. Afterward, her hands always ache.

The next time she’s helped into bed, she’s in a single room that smells of fresh paint and pine sol. If someone were to ask why, she’d tell them about that day the sky had been carved by the wispy trails of airplanes. In each shape, a million ways to get lost.

Two weeks earlier she had turned twelve in all the ways that mattered. The world just can’t keep its hands off a twelve-year-old girl. She and her brother, both too old to use the swings during school, but young enough to crave the feeling of being untethered from gravity, tunneled the air with their bodies, leaned back so far their feet blotted out the sun and the playground’s bark snagged their scalps.

Other things happened that day too. And everything she touched after that day would be sticky. But it was the before in the swing when, for a time, they were strong enough to sky what had been earthed. To earth what had been stitched to sky. How they were nothing more than a brother and sister who hated each other in the way siblings do after slugs slipped into rain boots, full boxes of Skittles and Smarties empty. They were gone for two weeks. Only fourteen days out of twenty-five thousand, but who ever needed more than a split second to be remembered forever?

The caregivers aren’t supposed to lock her in her room, but she hears the chunky thud of the deadbolt after they say goodnight. She’s one of the few that can still walk unassisted. They don’t know what to do with her. At lunch they ask, Chicken or fish, voices as pleasant as an automated call, then whisper, What kind of person, while they prepare a meal too soft and small to choke on.

Someone’s placed a bouquet of dahlias on her dresser. They brag like fireworks between a porcelain doll and stuffed cat. She’s always hated dahlias: how they grow so big that their stalks have to be bunched with twine so the weight of the blooms don’t snap at the neck, how they choke the garden with their insistent rust, violet, ochre. Another resident would love to have these, she thinks. She lifts the bouquet from the vase.

Once, years after those fourteen days, months after her brother scratched a note and belted his throat, she had a vision about who she might’ve been if they had stayed home that afternoon on the swings, played  Sorry or Life or Cutthroat Rummy, tainted  their fingers orange with an entire bag of Cheetos their mother would later yell at them about. The vision looked exactly like this old woman, clutching a bouquet, stems slickening her palms, petals trembling from the pinch.

Kami Westhoff is the author of poetry chapbooks Sleepwalker, winner of Minerva Rising's Dare to Be Contest, Your Body a Bullet, co-authored with Elizabeth Vignali, and story collection The Criteria, forthcoming from Unsolicited Press. Her work has appeared in various journals including Carve, Passages North, Waxwing, Meridian, West Branch, The Pinch, and Third Coast. She teaches creative writing at Western Washington University in Bellingham, Washington.