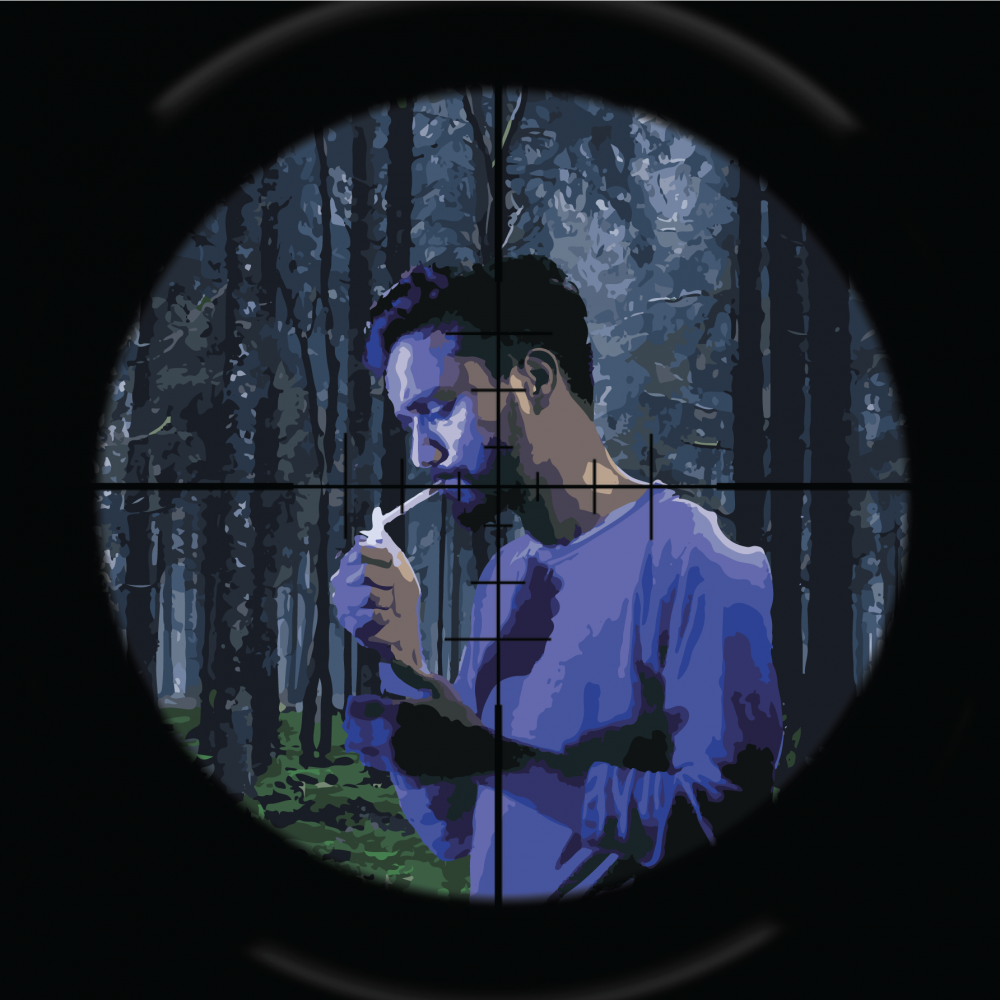 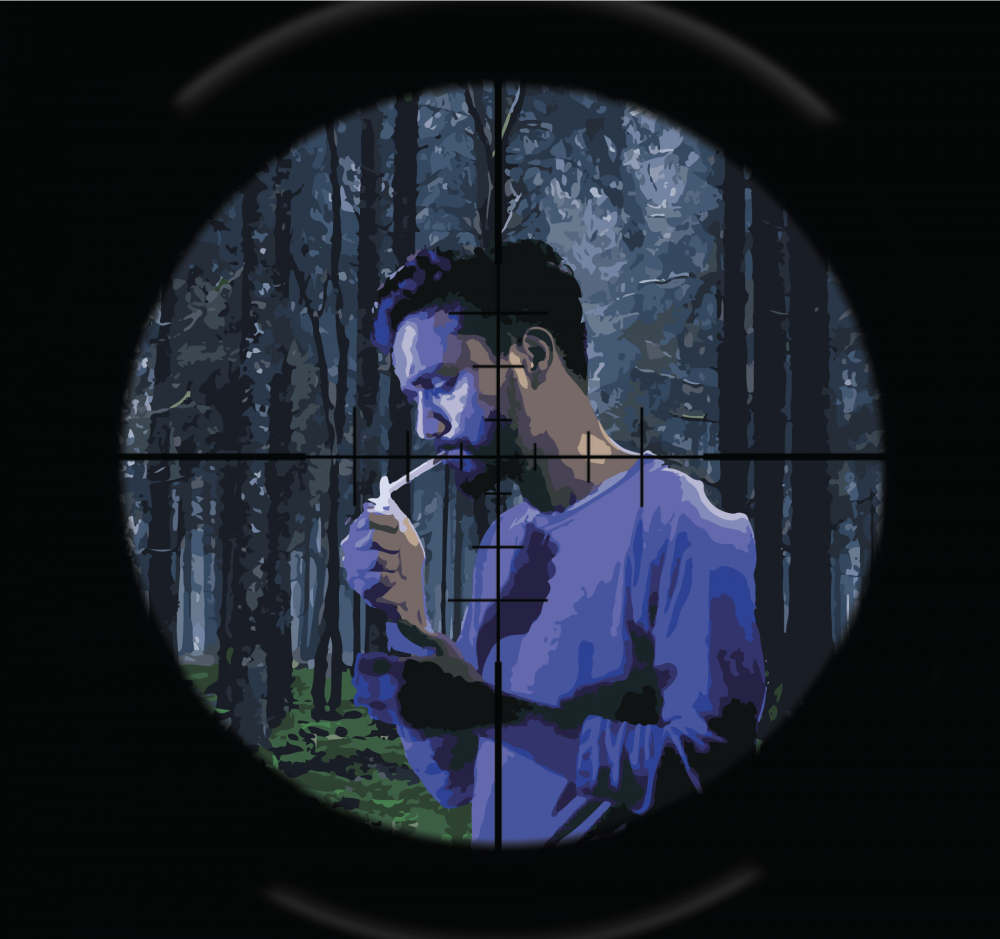 Corduroys was a poor choice given the waterlogged quilt of multi-colored leaves. The air cold enough for snow intensified the throbbing of my knees. I’d been warned. Butted into my armpit, an unloaded rifle. Target practice completed days earlier. Could I pull the trigger when a buck filled my sights? My uncle said I should decide only after sleeping with the feeling.

A deer came along soon enough, our bellies hugging soggy Eastern Ohio earth. Twenty yards out. Filled my crosshair. A young buck with few points. Ears flapping, his nose shoveled through the wet leaves. Moving to a tree trunk, his white tail danced in the stiff cold. I smiled at my uncle. He winked back. The odor of snuff embedded in his orange beard tingled my skin. Returning our eyes to the buck, it was doubled over convulsing. Thrusting. Grunts foreign to my ears widened my eyes. Hooves pawed. Antlers thrashed. Snot flew.

In the morning, I announced I wanted to bag my first buck. Later, packing our gear in the basement garage is when my paroled father showed unannounced. We spotted him a hundred yards out, strutting up the mountain’s winding chalk-rock road, sun ablaze on his back. Walmart jeans. Worn-out red fleece. No-brand sneakers and the Indians cap with a broken red bill he kept in the closet on a hook.

“Go inside. Wait there,” my uncle said.

I heard their argument through a floor vent and learned of the arrangement before being called down and informed. My father would spend the next day with us for the hunt and dinner afterwards.

The next morning, he returned in the same clothes. Shivering in the dark when we opened the garage. There wasn’t enough light to examine his face without staring, so I didn’t.

We pushed into the forest single-file. I led with my uncle behind me, our rifles aimed to the ground as safety dictated. My father started up immediately, his incessant blather drowning out the forest. Prison tales, wisecracks, glossed-over memories. I squeezed my rifle tighter with each. My uncle groaned every time his sister’s name was taken in vain. The thick plume of condensation above the Indians hat lit my skin on fire. Shoulder taps returned my glare ahead.

At the blind, he wouldn’t quit. Ignoring him failed. Nodding and smiling, same. He had no regard that the hunt’s success hinged on silence. He blew off my uncle and got louder. Hours on and no deer sightings, we surrendered. I stowed the unused gear, unloaded our rifles. Backpacks shouldered, we retreated. I didn’t want to bag my first deer with him anyway.

Halfway back, we stopped to pee at individual trees. Reassembling the line, my father took lead with me in the middle and my uncle behind me.

God, he wouldn’t shut up. Hot air billowed above that stupid hat. My mother’s name spilled from his lips. Her drug-induced death a convenient defense for his negligence.

I didn’t plan what happened next. Maybe I did. After all, I unloaded only four of five bullets in my rifle before leaving the blind. Regardless, my rifle caught my attention swinging to the rhythm of my steps. Skin hot, I pulled back the bolt action as slow as possible to chamber the bullet with little noise. I lifted the rifle. No longer earth, the muzzle now aimed at my father’s back. Sweat showered my body. My hand froze on the stock. Dread filled me visualizing my finger on the trigger. Then, my uncle grabbed my shoulder and squeezed. I grimaced, lowered the rifle.

“What?” said my father, spinning around.

“Nothing,” my uncle growled.

Once my father started jabbering again, my uncle took the rifle with a stern look.

Back home, sunlight waned. I was sent inside to unpack the gear. My uncle said he’s driving my father home. No dinner, no goodbye. Of course I approved.

My uncle returned hours later, said my father didn’t deserve another chance and I never had to see him again.

I bagged my first buck a few weeks later and never hunted again. I also never saw my father again. Not another word. All these years later, I still don’t know what happened to him. Sometimes I debate asking my uncle about that night. I wonder if he could have killed him. My father might have rotted away under a mat of soggy leaves more than a decade ago. Composted into something for a young buck to poke its nose through and gratify itself on. And that would be okay. After all, it’s natural.

Curtis Ippolito ives in San Diego, CA, where he's a communications writer for a biological research facility. He had several short stories published, most recently in Mystery Tribune, Punk Noir Magazine and forthcoming in Shotgun Honey.