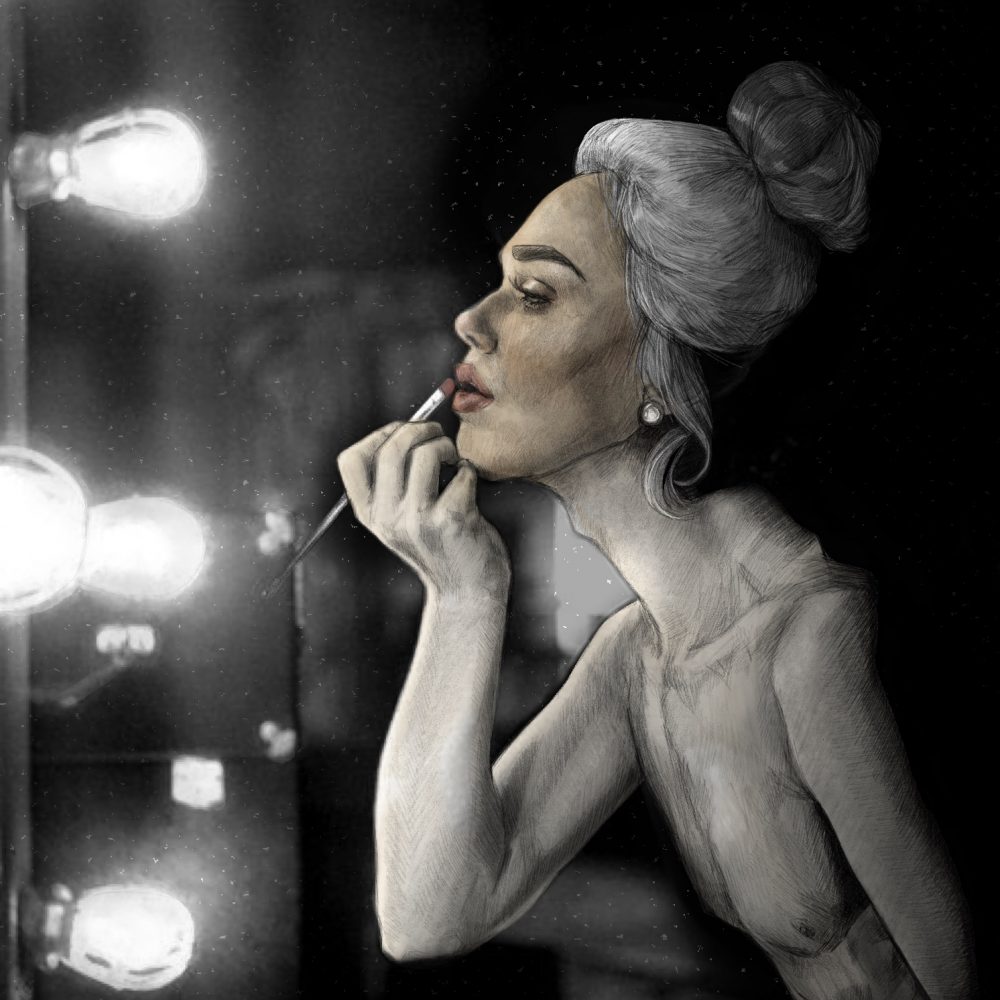 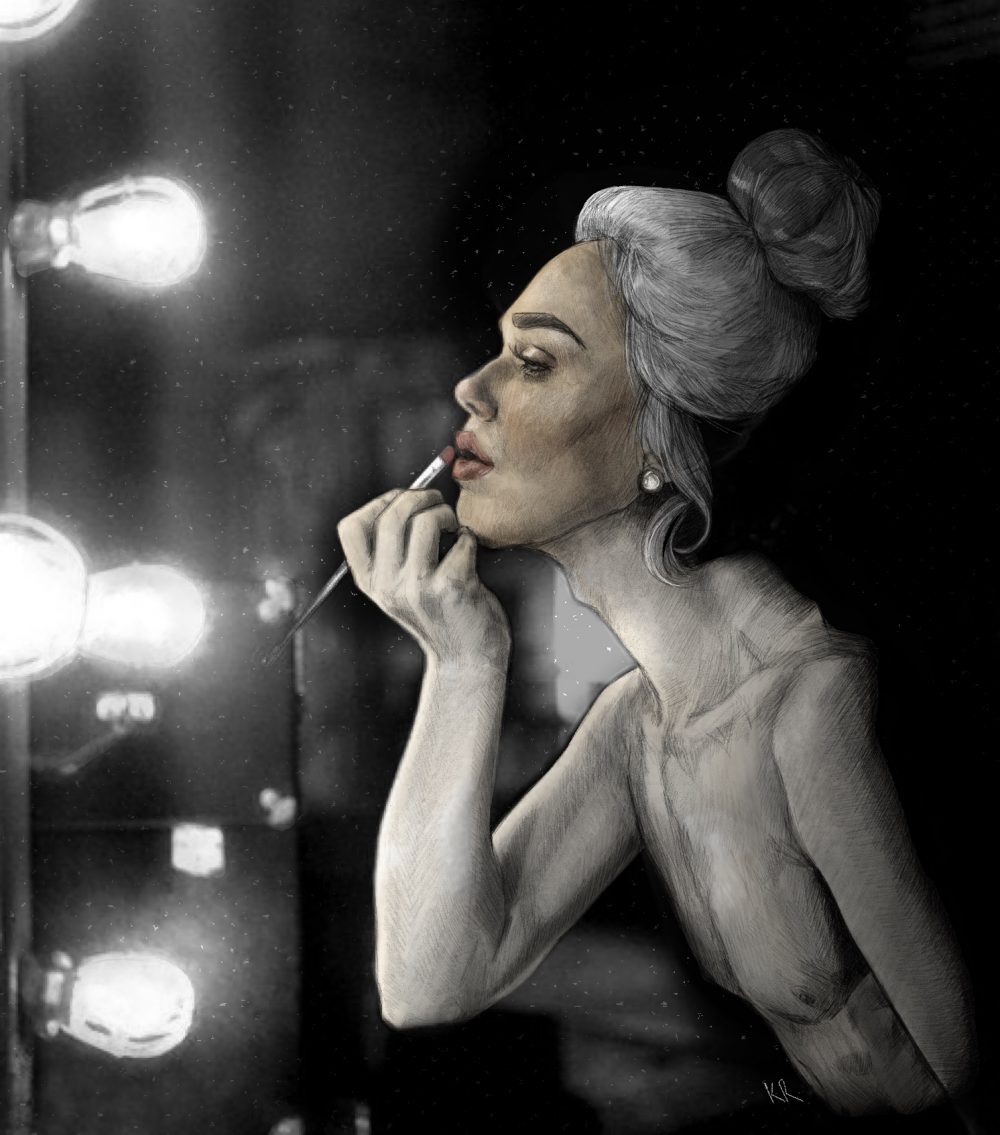 You strip out of your blue leggings, gently stretch your flesh-tone nylons into place, and tuck your short wide penis into as comfortable a position as possible. Your nether regions are humid and sticky. Baby-powder is a foregone conclusion. You were out till dawn dancing with friends and arrived late to practice this afternoon. You’ve been a Jennifer Lopez impersonator in Las Vegas for two years, and you’ve been choreographing new moves whilst lip-syncing “Let’s Get Loud” for the past few hours. You planned it carefully. Every detail. Down to the white and silver shimmery halter dress and knee-high white-leather boots Lopez wore during her 1999 FIFA Women’s World Cup performance. It was electric. You’re excited to bring that energy to your stage. You’ve been in love with J.Lo since you won a look-alike contest at a local mall in ninth grade. You gifted the nail-polish-set bounty to your mom because you had a hard-enough time at school for being a short effeminate Latino boy, but you kept the gift certificate for free drinks at Orange Julius that summer.

Your friend Alejandro recently returned from his mother’s funeral in Texas, so you’ll no longer be pulling “overtime” doing his Christina Aguilera show two nights a week. That’s a relief. You haven’t felt like a genie in a bottle since you were beaten unconscious at your high school in the Wholesale District of Los Angeles then stuffed into a locker. You spent the night there. The morning security guard set you free. No one at home noticed you’d been gone. Your mom’s drug dealer is gay, and you’d been fucking him since your sophomore year, but he never checked up on you. You found them both unconscious on the sofa and put yourself to bed. The calculus test you missed and subsequent GPA-drop cost you a scholarship, but you hadn’t planned on going to college. You were always Vegas-bound. Your first love was burlesque dancing, but you weren’t born with the optimal body shape for those costumes—too square.

You’ve been saving for gender-reassignment surgery for years. Hormone treatments have been consistent, and your breasts are coming in nicely. Your implants will be minimal to achieve J.Lo status. Also, classier than some of the oversized melons your female friends forked out way too much of their sugar-daddy’s cash to balloon their already ample chests Playboy-bunny style. Tacky. Though you still get drunk and motorboat your friend Scarlett’s tits on weekends.

You slip the mini dress up over your ample thighs and narrow hips shimmying it into position. You’re feeling spicier by the second. You own your stage and take your audience on an audacious adventure of Latin hip hop dance appreciation. At least that’s what you write on the back of your headshot when canvassing the strip to book new gigs.

Every so often a Christian “do-gooder” hands you a pamphlet selling salvation for a “small” percentage of your income equivalent to a full month’s rent. “Good thing God’s accounting for inflation,” you said once, then asked for another pamphlet and wadded them up on the spot, using them to “freshen up” your bra stuffing.

It’s impossible for people like that to bring you down. You’ve come too far from being chased by gang members down alleys; half hoping they’d catch you because you longed for physical affection. Mom had been warning her friends to keep their children away from you for years. “They might get infected,” she’d caution. Most nodded in agreement before you were sent to your room. But you had YouTube and movies and video games, and you preferred to avoid having to show everyone your penis to “prove it existed,” which had somehow become standard procedure over the years.

The drums cue your hips to sway. You might as well be a million miles from southern California. Throwing your head back to the horns, you position your long, caramel wig with blonde highlights over your fishnet cap and tug it into place, reposition a bit, then dip into your bobby-pin tray.

“Fierce,” Alejandro says, smacking your ass as he prances by.

“Sorry about your platinum Afro wig!” you say. “I underestimated the drop of the ceiling fan.”

Alejandro throws up stop-sign palms. “No troubles, papi! If I do “Fighter” one more time my regulars are gonna revolt.”

Remembering you haven’t given Alejandro his cut for booking the Aguilera shows you performed, you hand him a roll of twenties.

He squeals and gives you a quick peck on the cheek. Then he’s off to do shots and buy blow before tonight’s performance.

You prefer to avoid drugs. The rush of the show is enough for you and, with the hormone treatments, drugs tend to throw you too far out of whack. They also make it difficult to drag yourself out of bed in the morning and to the gym. You take pride in your hard ass and toned thighs that make your J.Lo impersonation more authentic than most. You’re sure.

Your cell phone buzzes and “Mom” appears on the screen. You haven’t sent money for a while. You select “reject” and take a mental note to PayPal her some cash later tonight. She kept you out of foster care after Dad was deported then disappeared. Money is the least you can do.

Tony, your stage manager, walks up. His cotton shirt is a size too small, accentuating his tan biceps. He cases you up and down looking ravenous and out for destruction. “You comin’ over after tonight’s show?” he asks.

You consider playing coy, but you know your cheeks are flushed brighter than your peach blush. You nod and give him a growl. Mom will just have to wait.

He kicks up the volume on the sound system. You throw some exaggerated hip sways his direction as the horn section amps the crescendo. It’s gonna be a great show.