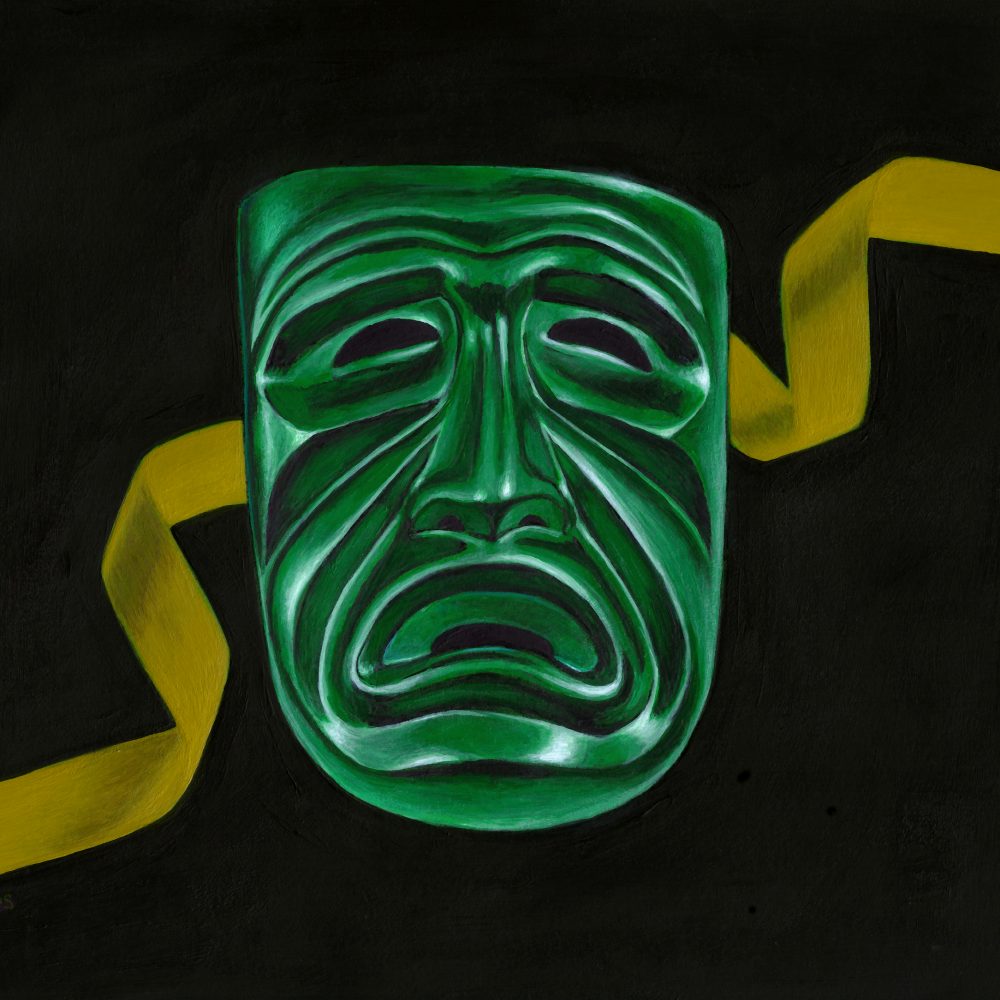 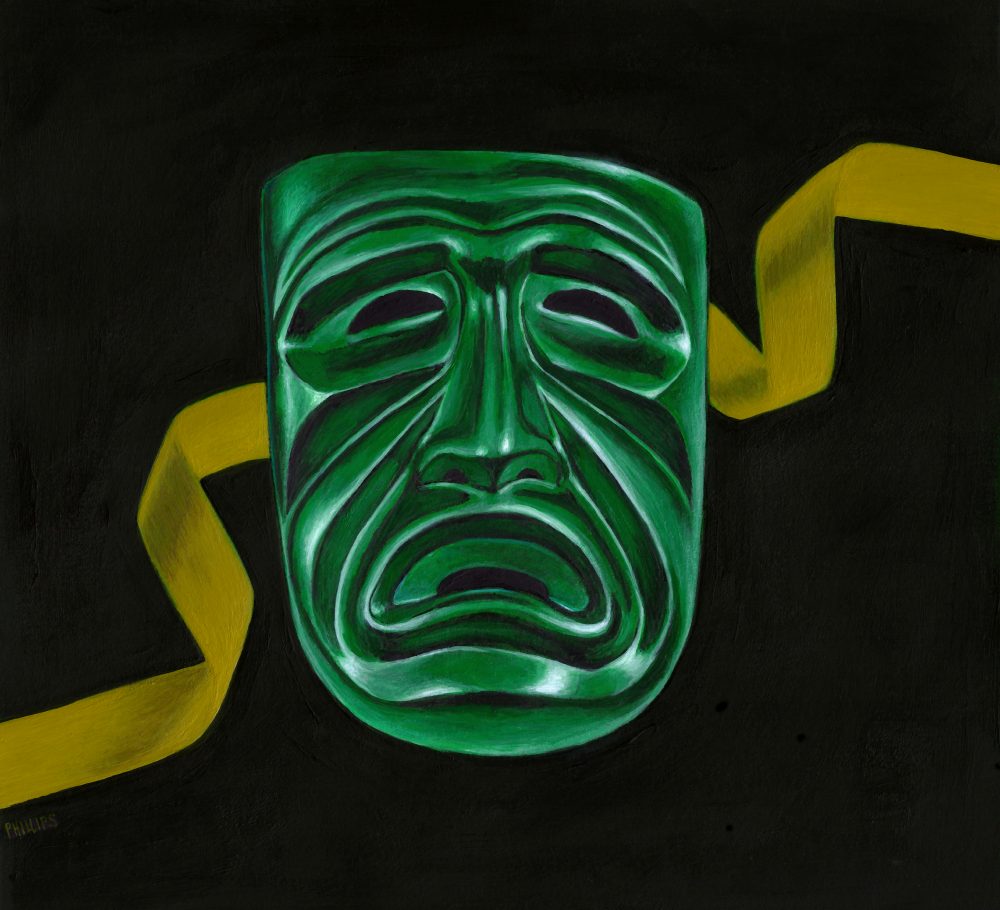 The idea was pretty much a joke.

I said that Jo should pretend that she’d snapped, and thought she really was the Good Witch of the North.

I was trying to lighten things up, seeing as how it was all basically over for us.

Jo had just said she was stepping down as artistic director of the Unusual Suspects Theatre. We were a black box troupe, born of the blood-sweat-crying labor of all of us actors, dying to do work worth doing instead of ripping each other’s throats out for a Cheetos commercial.

Jo had some very scary health problems and no money for health insurance. Plus, we couldn’t pay rent on the space and hadn’t for two months.

She had been the most successful of us all when she was young and beautiful.   She was part of the international tour of Wizard of Oz, playing Glinda.  She’d been rigged in a harness and floated over hundreds of audiences world-wide, in a costume worth more than the entire Unusual Suspects current production budget.

Jo was the most recognizable face, the heart and the soul of our company. So, we’d move on.  More time. Less stress. Why we’d been the last to get the memo that THEATRE IS DEAD and ACTORS ARE FOOLS was because we’d willfully ignored the steady stream of pink slips with capital red writing. This one we got.

I suggested Jo don a pink gown, plea a psychic break and go to some public place. I’d  accompany her, and tell anyone who cared that the current production was the one that cracked her.  That might get butts in the seats.

Maybe there was something mean-spirited about my suggestion, a public shaming of her now compared to her former glory days.

But everybody got excited about it.

A bridesmaid, prom and quinceanera dress were torn apart and Frankensteined together with an eye for beauty and spectacle.  When it was done and she was fitted, Jo, 68, looked like she like she could dress-battle-to-the-death Gwyneth Paltrow on that Shakespeare in Love Oscar night.

We decided to do our stunt at the Greek Villa museum, on their free admission day.  Jo loved that place, especially the garden and the reflecting pool.

When I picked her up and she sat in the front seat of my Dodge dart,  she looked like she was drowning in a clown car of tulle.  I totally laughed and made jokes, but she was mostly quiet the whole ride.

When she got out of the car, she was completely in character.

Even on their free day, it wasn’t like the museum was crowded.

But a kid saw her in the parking lot and came right over.

I explained to the mom, sotto voice, that she’d played this role in a touring company, and recently she’d had a bit of breakdown because our theatre was going under.

“Are you a good witch or a bad witch?” Jo asked the little girl.

When we tried to enter the museum, the security guy stopped us. I told him the same

story I’d told the parking lot people, but I went further in-depth.  She’d always loved this place — not as Glinda but as Jo. Maybe it would help her remember who she really was. Her marbles…lost. Maybe in the pool’s reflection they could be found. I wasn’t a psychologist, just an actor, but aren’t all actors, in a way, psychologists?

The guard wasn’t going for my story, but then Jo looked at him and smiled just right, and he let us in.

The museum was really dead.  Maybe we were too early and would have to wait

around a bit.  We moved through a whole room just the two of us, me in my black “Usual Suspect Theatre” T-shirt, and Jo in this pale pink cloud of costume, among all these broken white Greek statues.

As far as a marketing stunt, this was in the fail category, and I apologized.

She didn’t say anything to me, but just took my hand, still in character.

The skin on her hand was covered with wrinkles, which is I guess what happens.

I guess that will happen to me, too, if I live long enough.

Eventually we got to the veranda that overlooks the reflecting pool, and she stood there, looking out and down at it.

When they fished her out, she’d had some time to float in that pool — dead on impact.  The museum managed to keep it pretty quiet so it didn’t make enough of a stir to sell out even one night of the last production of the Usual Suspects Theatre Company.

But we all raised glasses and toasted her as the black box closed its doors for good. We all cried and made speeches, but none of us admitted that we were all very envious.  Me most of all, because the Glinda bit and dress had been my idea.

How could anyone top that exit?

That last line delivered as Glinda?

“You’ve always the power my dear,” she’d said.  Not to me, to herself.

And then a soaring jump into a pool that every sign noted was not for swimming, but only for admiring. And wishing.

I wonder how it looked through her eyes.  I bet she never even saw that she landed.  I bet she thought she’d learned to fly.