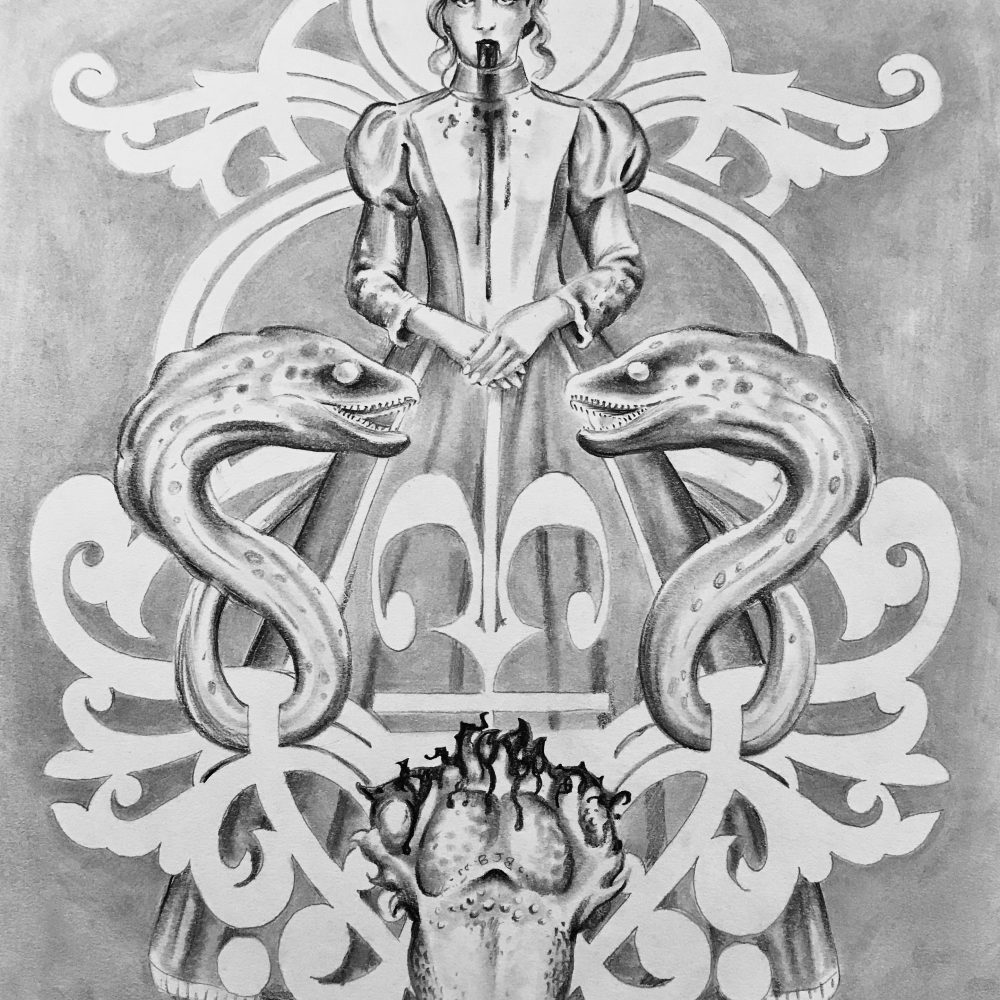 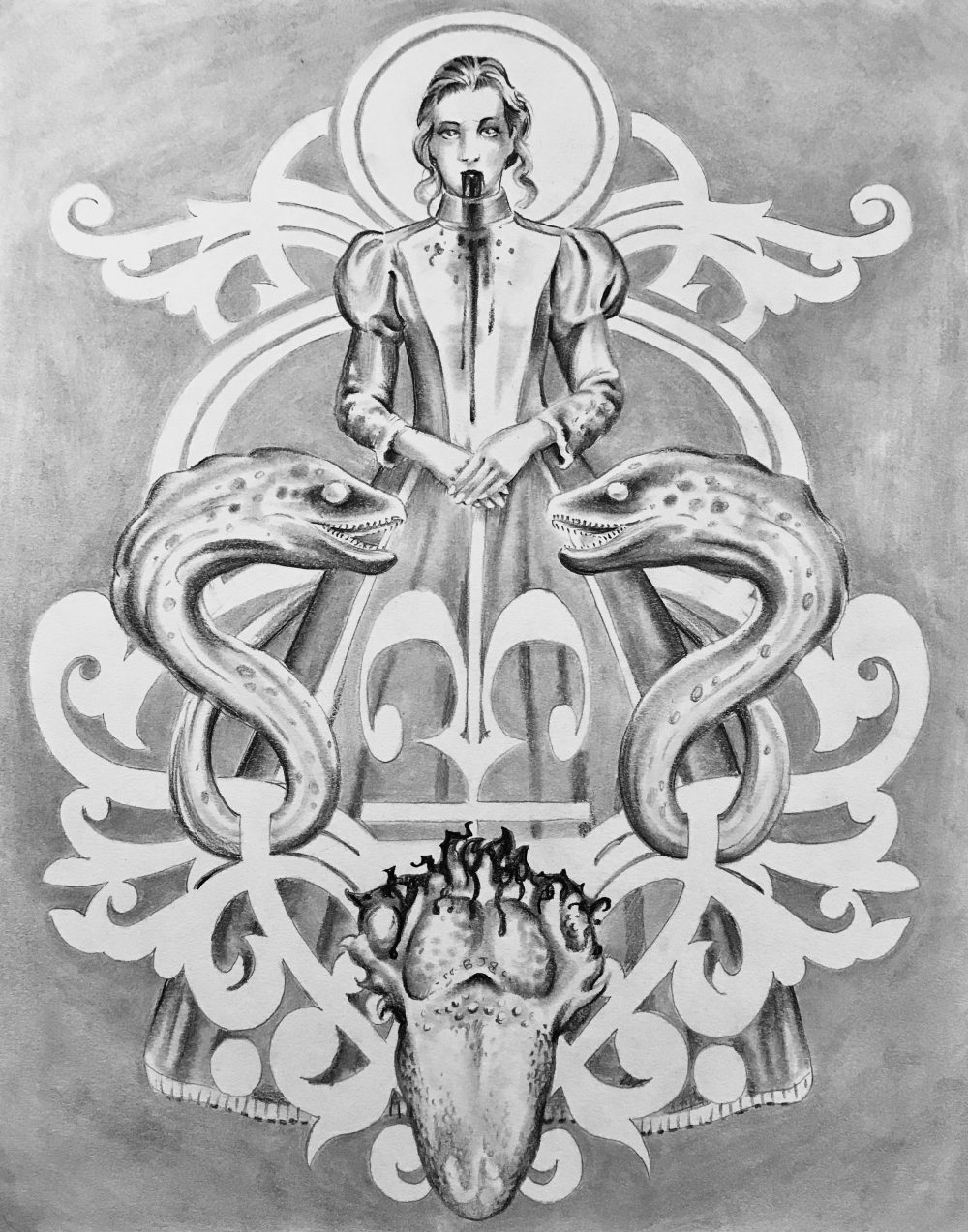 The night of the Harvest Debate, in the year of the great famine, the Queen took the side of the peasants. She argued they should keep the castle share of grain so as to have something to sow in the spring and — by eating through the winter — strength to sow it.

In those days, the Debate Winner chose the music for the entire festival. Some say if she’d thrown in a Mazurka or two, the whole debacle could have been avoided, but the Queen loved only the Polka and our King hated it. Nonetheless, he had to dance that wretched hop all night while the Queen sang along in her off-key way.

By the time the orchestra wrapped and the guests took to bed, our King’s knees were bursting like rotten plums so, facing six more nights of oomp-pa torture, he sent his favorite Huntsman into the woods to slice off the Queen’s tongue.

The Queen’s howl shook the hills and roused the wolves from their dens.

Relieved of her tongue, the Queen ran home, but the Huntsman stood staring at the tongue in his hand. Healthy, plump and agile; it glistened in the moonlight like a bloody salmon. “This will make a fine dinner” thought the Huntsman and he stuffed it, still howling, in his back pocket from whence it spewed a ruby trail as he strode through the night. The wolves followed and lapped the drizzle. Tasting the blood, those heretofore silent stealthies joined the tongue’s howling and to this day cry at every full moon.

As dawn broke, the wolves quieted.

Relieved of her howl, the tongue began to sing. The Huntsman, a lively fellow, whistled harmony and so they progressed, tongue and traveler, ‘till he reached his home. So merry was their music that, hearing it, the Huntsman’s wife abandoned her fishing pole and began dancing with her husband. They danced all day. When, at last, they tired, the wife lamented that she had hooked no fish for dinner. The Huntsman whipped the tongue from his back pocket and, with a pleasing bow, presented it to his wife.

“What gory delight is this?” exclaimed the wife who, being female, craved iron. She grasped the slippery thing with two fists but when the tongue broke into an aria the wife let go in surprise and our bloody thrasher arced in the air, hit a high note, and dove into the pond.

Still, the Huntsman and his wife could hear the tongue singing. They stared as ribbons of blood rose from the depths and spread through the water and they laughed in amazement when the squiggly fish who lapped that liquid sunset sprouted legs and began to hop about, croaking in two/four time. To this day, those capable of wonder delight in froggy rhythms while the jaded stop their ears.

Relieved of her song, the tongue sank to the bottom of the pond and shared her innermost thoughts with the eel. Her intellect so beguiled that taciturn mud worm, and he in turn wooed her with such unthreatened confidence, that they mated at once and filled the pond with chattering pink offspring.

That same evening, our King proclaimed that the Queen had reversed her position. Seven eighths of the grain to the castle and Mazurkas for all! Spying the Queen’s bloody maw, those who believed the Mazurka a form of Polka that therefore would have been played anyway held their tongues less they lose them.

Sadly, the Queen bled to death. The next year, to protect all women from a similar fate, our King them barred them from the Debates.

Sadder still, seven eighths of our farmers perished from starvation. Thus, that was the first year our Debates were open to men of all seven kingdoms, for our wise King knew a large festival would draw youths who might be conscripted for petty crimes and forced to work our fields. To this day, we fill our prisons with this “second harvest” and (while plows have replaced much farm labor) it remains the secret behind our well-kept roads and bridges.

Saddest of all, the castle had almost no food to sell to the festival crowds. In this last sorrow, the Huntsman and his wife saw their opportunity. They filled six wagons with pickled eel and set up a tent.

Everyone knows that pickled eel (aside from being delicious!) refreshes an orator’s throat, but it soon became clear that the pink eel enchanted the tongue as well. Indeed, whosoever tasted that rosy worm could lose no argument. In fact, so great became the oratory skill of all who ate the Huntsman’s eel that he and his wife were tried for witchcraft and their pond was seized by the church.

Nevertheless, the reputation of the eels persisted and soon our great Debates morphed into the eel festival of today. Each fall, fathers bring their sons to Hunter’s Pond to eat our famous eel. Wags from Chickpea to Churchill credit our sanguine thrashers for their success and our kingdom continues to thrive.

Yet, as day demands night, so our festival finds its funeral. In a process called Reclamation, mothers bring their daughters in disguise and urge them to consume our sacred eel. We do not know what becomes of these male-clad girls or how many slip by undetected. To a one, mothers under suspicion engineer their own capture to allow their child’s escape. We used to cut the tongues of these apprehended dams, but that is barbaric. Now we burn them at the stake.

Though bittersweet, this maternal blaze is the highlight of our festival. If you come, you can discern which flaming females ate of the eel as girls; they blaze with a ferocity that rivals the Harvest Moon itself and it is said that all who gaze upon that inferno can never be in the dark again.