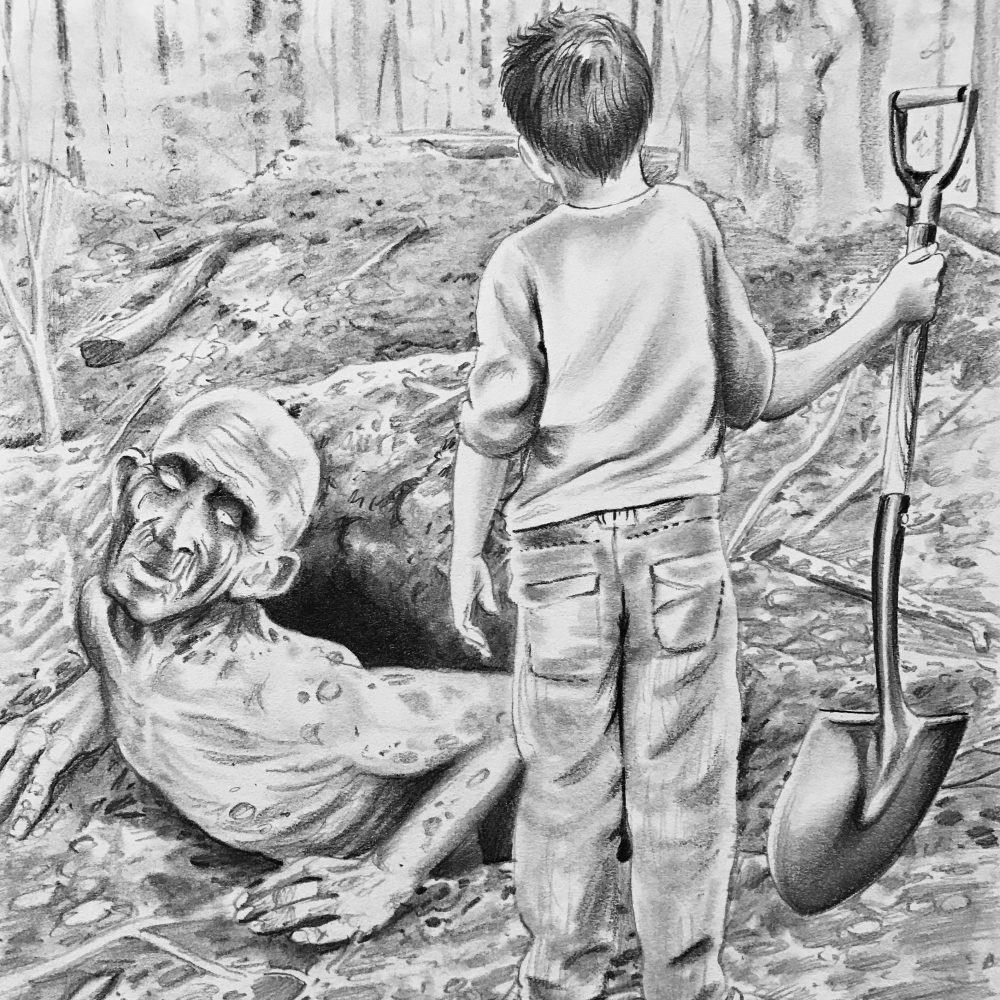 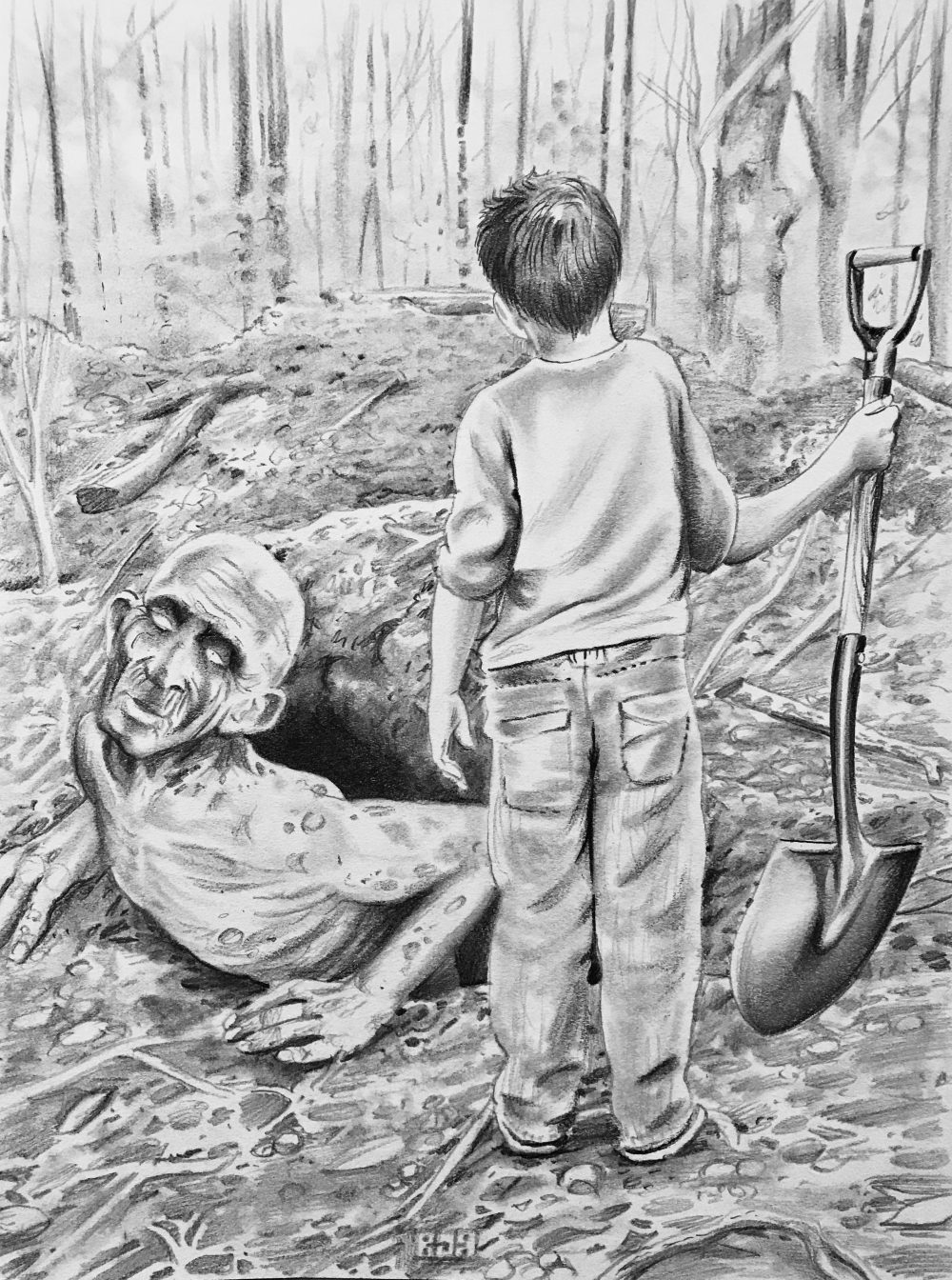 Like every morning, Lizzie held her breath while she washed dishes. The second her husband’s truck disappeared down the road, a knot untied in her chest and she breathed easier.

At the table, her boy, Daniel, shoved eggs, bacon, and toast into his mouth. Crumbs sprayed as he tried to talk.

“Chew first, talk second.” She used her sternest “mom” voice, but she hid her smile as she washed the dishes.

“I have to dig up Charlie!”

“Mom, I told you about Charlie. He’s my friend out in the woods.”

Lizzie stopped scrubbing. She removed her dish gloves and turned to face her son. “You have a friend in the woods?”

Daniel resumed shoveling. “I told you last week! Charlie’s my friend. He lives out in the woods under the old crossroads.”

Lizzie walked to the kitchen table. “Babe, how old is Charlie?”

Daniel stopped, fork halfway to his mouth, face scrunched in thought. “Dunno, I guess old if he lives underground.”

Daniel rolled his eyes. “Yeah, that’s why I gotta dig him up.”

Lizzie returned to her sink. “I suppose that makes sense.”

She paused. “I don’t know, honey. Daddy doesn’t like you using his tools.”

“Please? Pretty please? Charlie’s tired of being under there and he said he’d give me a wish if I did.” He lowered his voice. “I think he might be a genie,” he confided.

Lizzie bit her lip. She stared into her son’s eyes and sighed. “All right. But”—she broke in before he celebrated—“you clean them up and put them back before your Daddy gets home.” She left the sink to kneel before her son. She placed wet, soapy hands on his shoulders and looked him in the eye. “You promise me that and I’ll let you.”

She held his gaze for a moment then let him go. “Go have fun, baby. Be back by supper.”

Daniel whooped and leapt out of his chair.

“What are you going to wish for?”

Daniel paused at the door. “I can’t tell you. It won’t come true if I do.”

The cold air bit her hands as she took in the laundry. Her husband didn’t like dryers. They were a waste of money.

Dead leaves tumbled in the breeze and she worked double time getting the wash in. If a spec of dirt got on the linen–she shook away the thought. She hurried inside to fold and put away the laundry. Tonight was meat loaf night, and Henry expected it on the table when he got home.

Meat loaf and his family.

Don’t forget your promise, baby, she thought before returning to work.

She stole glances out the kitchen window between trips setting the table.

Henry sat in the living room, watching the news and drinking beer. He was already on his second one of the evening, and just like animals knew an earthquake was coming before anyone else, so too did Lizzie know a different kind of disaster was coming.

She made one last trip to the window, prolonging the moment as long as she could. The television snapped off and Henry stomped to the table. Lizzie sat another beer in front of him then sat down. She wrung her hands under the table.

She closed her eyes for a moment. “I’m sorry?”

“Oh, he’s out playing. I said he could stay out a little late.”

“You said?” Henry rolled the words around his mouth, tasting them. “What time is it?”

His hand whipped out, catching her on the cheek. His high school ring cut her.

Lizzie fell back, knocking her head against the floor.

Henry got up. “That’s right. So what time should the boy be here?” He unbuckled his belt and doubled it over.

Lizzie’s mouth opened and closed, but no sound emerged.

“Six!” The belt came down, hitting her upraised hand.

She jerked her hand back and cradled it to her chest. She turned away and Henry went to work on her back.

“I work all day, put food on the table, and this is how you repay me?” he said between strokes.

He raised his hand. Cold, iron fingers wrapped around his wrist. Henry turned, a stupid, confused look on his face. The fingers squeezed and the bones in Henry’s wrist turned to pulp.

He screamed, high and shrill. He clawed at the hand, but it held fast. Henry sobbed. His knees buckled, but the hand held him up.

Lizzie turned, eyes red with tears. A man stood behind Henry, naked, sallow-skinned, covered in night earth, a great, sucking hole in his chest. His face was impossibly old, skin drumtight over his skull. His eyes, though. His eyes burned.

“You will be quiet,” he told Henry. His words came out slow. His voice rasped. Vocal chords long unused twanged.

Henry continued screaming. The man looked at him in disgust and clamped his free hand over his mouth.

“You are Daniel’s mother, yes?” His eyes bore through her. She managed to nod.

Lizzie rose to her knees. “You’re Charlie,” she whispered.

His maggot-white tongue flicked over dead lips. “Go,” he said. “I hunger, and Daniel does not wish you hurt.”

Henry begged her with his eyes.

Lizzie ran to her son.