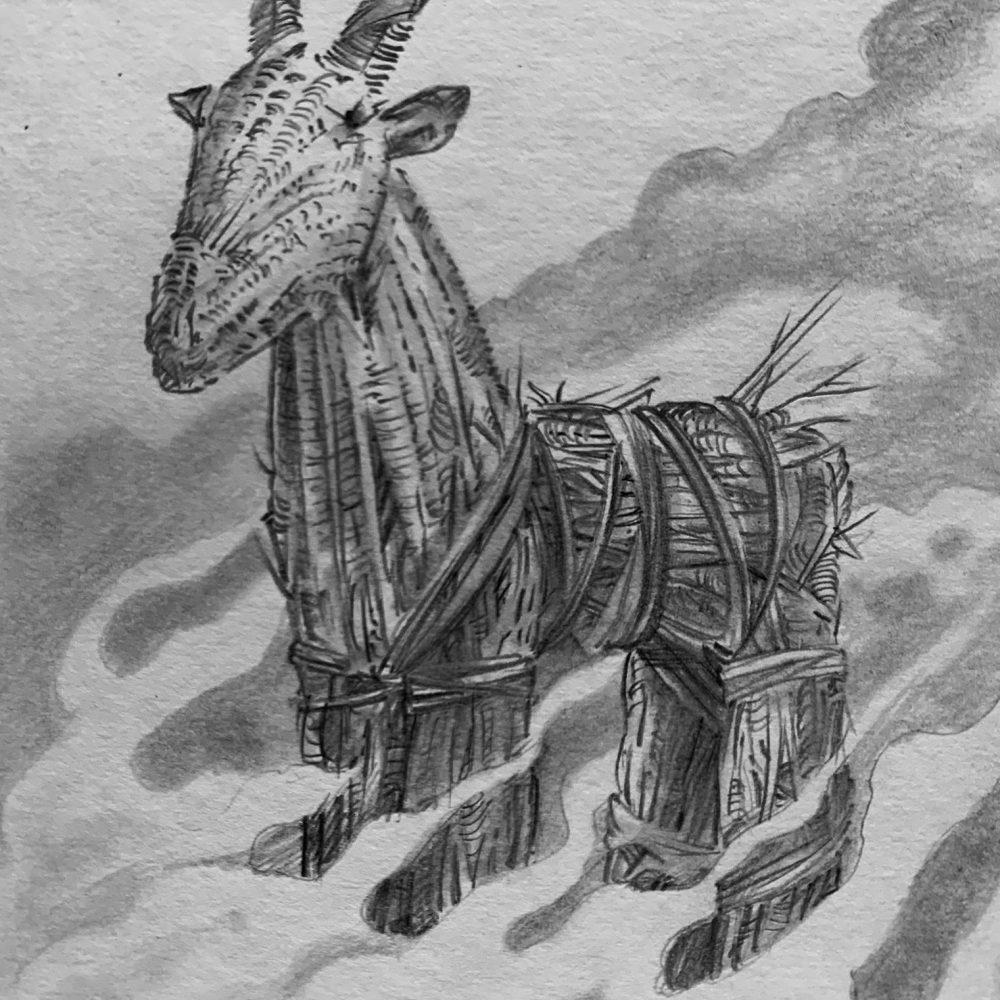 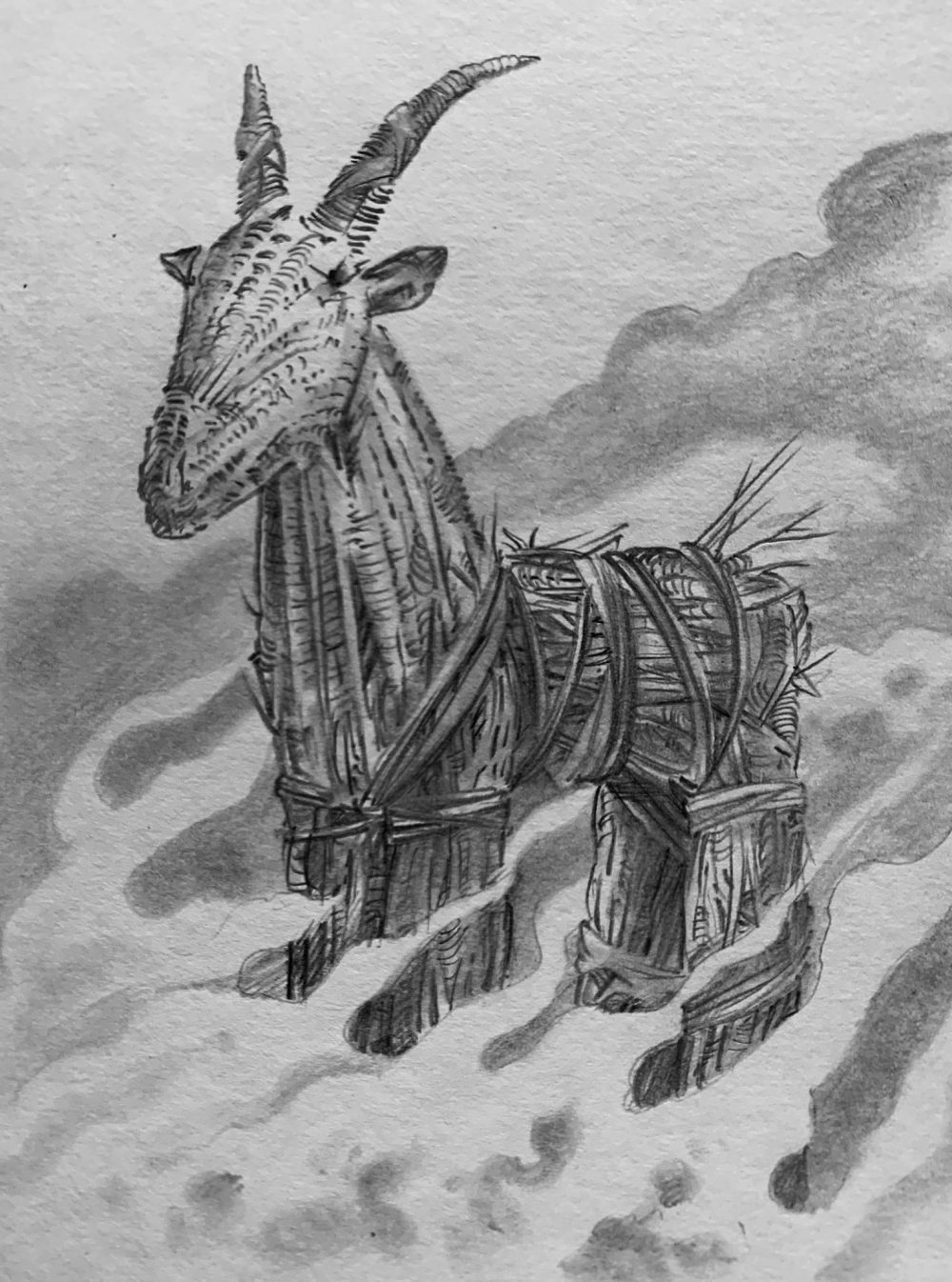 We leave the bar to burn down the goat. Laughing at jokes that won’t make sense to our headaches in the morning, we stumble down the brick road as brothers and soon to be brothers. Pretending to sober up, we stick out our alcohol-soaked tongues to chew snowflakes. For a warm-up act, we light the cocktail napkins we’d stuffed in our pockets with a Zippo and toss the sizzling paper into the skin-chafing air, watching the flames twirl like panicking fireflies.

A tailor financed the goat this year. The newspapers called him Hugo. We called him a fool when we read the goat’s price tag. We’d cut out his picture, and for the past week, sober and angry, we defaced his black-and-white face, drawing a graphite mustache over his gummy grin and coloring in his horseshoe hair.

On a street corner, we fantasize about how many beers and how many shots of vodka the money we’re about to burn would have bought. One of us shouts a thousand beers and three hundred shots of vodka. These numbers strengthen our resolve. We ignore the flashing red hand and backstroke across the street through a sea of uncorked spirits.

We met this year’s inductees like we met every year’s inductees: in a dream. The dream is always the same. The future inductees are leaning against an unlit lamp post. We, a drunk army, march toward them, swigging carbonated bubbles and taking turns giving each other piggyback rides. When we parade past, the sweet smell of overripe hops is too alluring. With their hands in their pockets, the future inductees follow our heels. After a mile or so, we turn around and say: “You can’t be that heavy.” When we wake up, we go outside and guess people’s weight until we find the real them.

We reach Castle Square. Even in the dark, the history of all those who’ve made this trek before casts shadows. We don’t see them. Our eyes our closed. But the shadows squeeze us like welcome-home hugs.

We approach the goat on faith, like a child shaking a Christmas present, unsure of what’s inside but knowing the box’s mystery will only bring joy. Holding hands, our feet crunch snow. We don’t want the inductees and less experienced of us to get lost. Like a flock of birds, we glide across Castle Square’s covered concrete in a V shape. Every once in a while, one of us breaks free and replaces the leader, the point, until we sense his wooden skeleton and wire mesh skin.

On the count of three we open our eyes. There stands the goat. He must be at least fifty feet tall this year. His dried straw fur raises on his hackles into a spiky tan forest. His reincarnated soul recognizes us, but his builders gave him no muscles to flee. Red fabric spins around his horns, which curl and touch his rear. More red fabric circles his mouth like a muzzle. There’s enough red fabric to wrap a million Christmas presents.

We ignite our torch. A horde of tiny white bulbs makes it so we can barely see our fire, but we don’t need to see the yellow and orange wisps to know they’re there. Together, like a team stacking hands, we hurl the pool cue, which lands stuck in the goat’s right forelimb like a toothpick skewering a giant. Our fire starts small, like all friendships do. However, a few minutes later, the goat is a star pushing us together with its gravity. A ruby inferno whips off the goat’s back and waves hello. Plumes of smoke float into the sky, and we, like kids plucking grass blades and gazing at clouds, take turns discussing what we see in the sooty outlines.

We lie on the wet Earth and move our arms up and down and legs side to side, becoming snow angels. One of us retrieves a flask. We take turns sipping as brothers, waiting for the warmth to peter out.

Will Musgrove is a writer and journalist from Iowa. He received an MFA from Minnesota State University, Mankato, and his work has appeared most recently in 5x5 Literary Magazine.