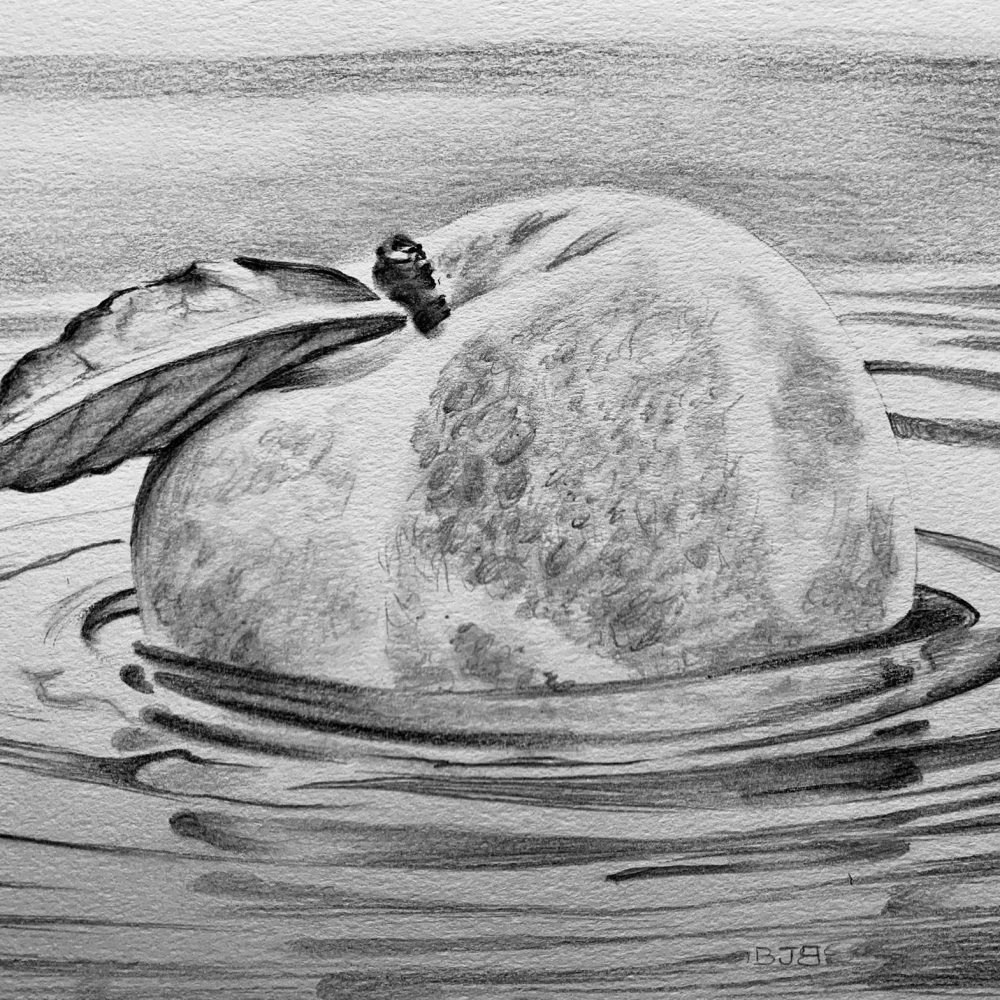 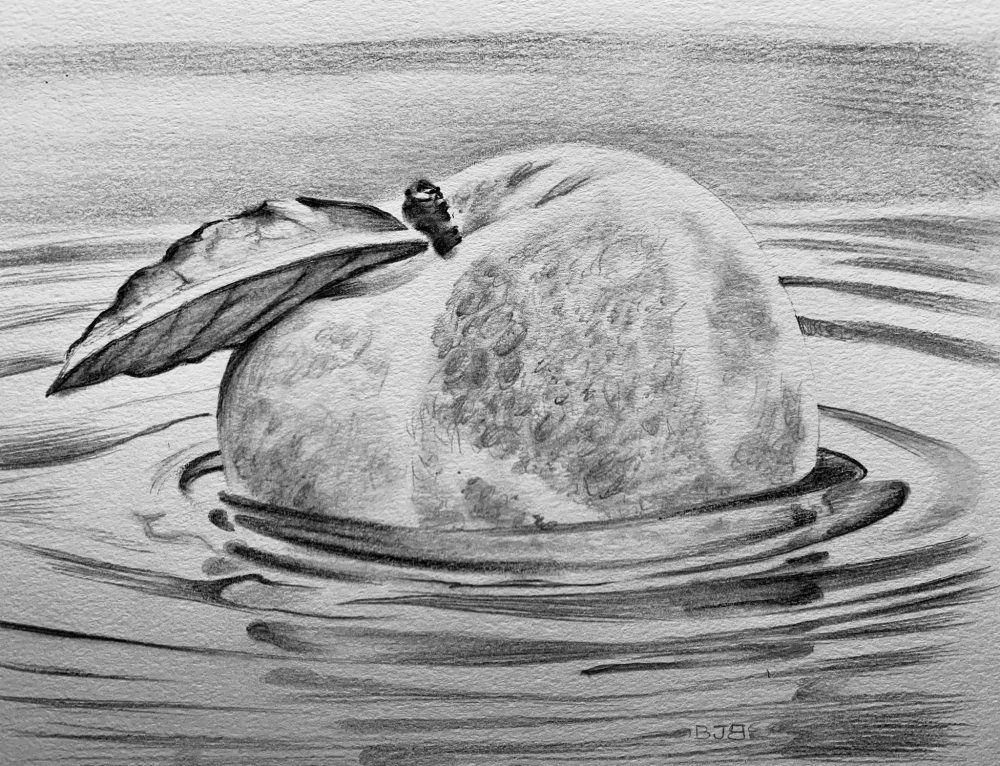 It is ghastly to harbor a human body. No one will tell you this. You will only hear of the elderly woman toiling by the river, her surprise at the large ripe peach floating in the current, her growling stomach.

I don’t remember how it came to be — was there the shadow of a three-legged crow? and a long fall? — but there I was, floating on a ribbon of varying blues, undulating, carrying not a hard peach seed but something else. It reeked and twisted inside me and I hated it.

The old woman hauled me from the waters to the hut she shared with her husband. The beast in me clamored for freedom, and I tightened my skin around its ferocity. But hunger and freedom combined are more powerful than a sentient peach’s will. I couldn’t stop the harried C-section from destroying me and unveiling the horror I’d carried — a boy, pristine, all newborn wails and vital youth. The old woman gathered him up in her trembling arms and wept for joy.

No one will tell you what the old man and woman did with the discarded lumps of peach, those remnants of birth, of me, scattered on the hard earthen floor. They were peasants, luckless and whittled down to sinew and perseverance. Of course they ate me. They picked me off the hard-packed dirt floor and stuffed me in their gaping toothed orifices. What they didn’t eat they buried in the corner of their small vegetable garden. It was dark and dank at first, but I grew, roots deepening, green slowly emerging, reaching towards the sun.

I think I was a woman once, before I became a peach. I was a woman who became a peach tree, and my spirit somehow snaked upwards from root to peach before I fell. The order of nature is confusing sometimes. Was I only one peach or all the peaches on the tree? Is my conscience divided into all those peaches? If so, then where else was I?

I remember other things, too. I was violated when I was a woman. I remember a burning hurt at my core, my head shoved against wood, ripping fabric, fear in my throat, dirty hands on my hips. Maybe that explains my hatred for my false seed; it festers in both memory and hurt. I am probably not as forgiving as other women. Perhaps that is why I am no longer human.

As I grew, so did the boy. He showed a penchant for war almost as soon as he could walk. He plucked spindly aphids off the vegetables and crushed them between his fingers. Lizards scampered away with their tails clutched in his fists. Birds learned to find shelter in my branches, for I was the one thing he wouldn’t dare approach or harm. Did he have an inkling of what I was? I hope so.

When he heard about the island of demons, I could see dreams of glory burning in him. His skin shone, his stride grew jaunty. The old man and woman begged him to stay, but he was too hot-headed to listen to reason. When he went off to subjugate demons, all my peach blossoms bloomed.

Not long after he left, the old woman hobbled out to me one evening. I was tall and terrible under the moonlight, and she couldn’t suppress tremors of fear wracking her wiry limbs as she knelt before me.

“I am sorry. We robbed you and violated you that day. I see you in my dreams every night, as you were before you became a peach. I know what happened to you. Will you forgive us?”

What can forgiveness do for a rooted spirit? I shot this thought out in the form of a withered tree root. She recoiled and muttered a Buddhist mantra. Oh, the irony.

But she wasn’t swayed easily. She bowed low before my grave, wrinkled forehead to the ground. “I was the one who fished you out of the waters. We have prayed many years for a son, and we lost ourselves in the glory of having our prayers answered.” Her fingers curled in the fertile earth. “My husband has a clear conscience, but I do not. I will do whatever it takes to appease you.”

I shook some leaves off my branches. Remember what you did to me after he was born?

A peach landed before her, split open to reveal maggots. You must know my pain.

She wailed, lips quivering, her wrinkles already deepening with the coming task. But she nodded and left me be.

This is how it will happen. Under the light of the full moon she will bring him to me, haughty in his glory, believing himself immune to desecration. She will hug him from behind, say how happy she is to have such a brave and wonderful son. He will scoff and shrug her off. She will pull the knife from her sleeve and stab him, again and again. He will fall, confusion clouding his dark eyes. She will weep as she slices his stomach open. Maybe he will still be alive as she does this. The moonlight will turn his blood and guts into silver. She will gag on his intestines but will continue chewing, her watery eyes forever on me. The heart will be the hardest for her to consume, but her calloused fingers will grip it tightly. The peaches will ripen in satisfaction. The hero’s blood will seep into my dark earth, and I will be whole again, flesh and seed and all, finally.

Alyssa Pearl Fusek grew up in the small mountain community of Cobb, California. She graduated in 2015 from Willamette University with a B.A. in Japanese Studies. She is a Pushcart Prize nominee and her work has appeared in Ghost Parachute, Noble/Gas Qtrly, and The Helix Magazine. She currently lives and writes in Chico, California with her partner and one cat. You can read more of her fiction and poetry at catandmothwritings.wordpress.com, and follow her on Twitter @japanesepearl.