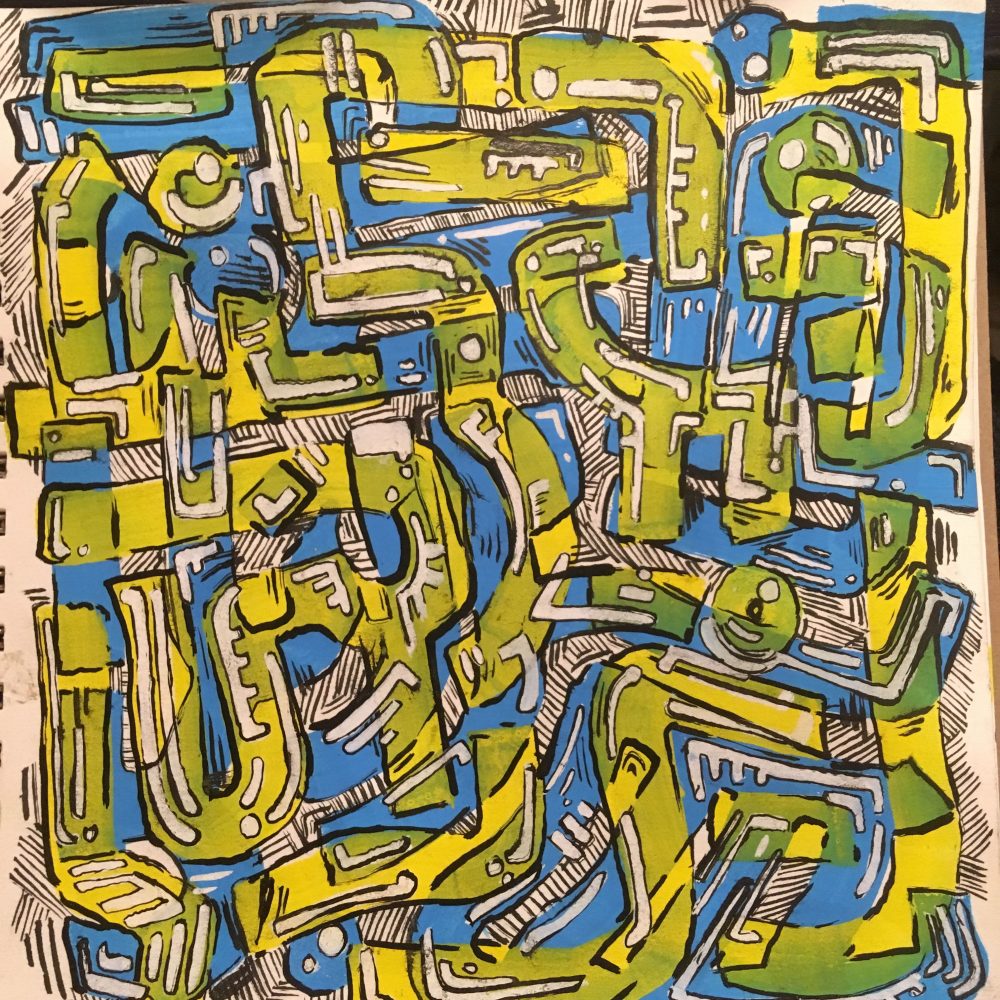 Steve said he was there, but I didn’t see him. Barry was there. He’s a good friend.

We had that last party in the old abandoned church. It seemed like a good enough idea because no one else was using it, and we all figured the pack should have ourselves a shindig before it was gone. We partied in the rectory. We partied in the nave and filled up the room where they used to keep all the wine with more wine and drank like Bachus ‘til we had to lean on pews to keep from wobbling. We set up speakers on the altar and danced. The music was so loud it shook our bones before it sunk down to a place we guessed was our souls. It was a to-do. A tribute to our Babylon of light and of life. Our dog of eternity and the canis of our hereafter. None of us ever knew another place like it, and then they tore down the hound, pillar to post, and put up a goddamn Walmart.

It was one of those new Walmarts that’s got everything and stretches so far back it makes you squirrely. It had an eye clinic for your eyes, and a regular clinic for your regulars. It had a restaurant and a little playground for kids to play in which had a little slide inside along with some balls, stuffed animals, and large plastic blocks. There was also a pharmacy to go to after you went to the clinic, and a bank to go to after you went to the pharmacy, and a place to rent movies, and an auto garage where right outside people sold cable television subscriptions. This, of course, along with all the regular stuff like pillows, blankets, bacon, end tables, lambchops, toilet paper, three ring binders, bags of Easter candy, action figurines, fresh basil, pear trees, weather fencing, lawn sod, exotic cheeses, sound bars, and printer ink. All of it bathed in the dullest of florescent lighting that came from a ceiling raised so high you felt like you were inside some underground cavern that goes on for miles. With pale brown concrete floors and steel shelves with people walking around the place like ghosts, looking lost as Dante.

Me, Steve, and Barry, we stood at the door saying, hi as folks drifted through.

“I was there,” Steve said, like he was always saying.

“You know I didn’t see you either,” I said again.

“It don’t matter if you did because you will,” Steve said.

That’s when Steve told us he was gonna to do it.

“I kept all the masonry.”

“In the Lawn and Garden section. You know, right where it used to be.”

We all agreed this was a good idea because when you already have all the stuff to build a church, it doesn’t take long to raise one.

We started putting up the east wall right next to the isle with the weed killer on a Sunday afternoon. Whistling while we worked. We put the last finishing touches on the church on a Saturday and thought this was fitting. There was no mistaking it. This was our old abandoned church right back where it used to be. Tall as Atlas and just as proud. The only thing left to do was throw a shindig.

The thing you need to know about shindigs is that everyone’s invited, and for this shindig, everybody came. They came one after another, giggling and laughing. Everybody feeling like they were the queen of May, just flooding into the Walmart with all their all doodads and whatsits and warm smiles and long embraces. It was a jollity. Pure saturnalia, really. We started on a Sunday, and before anyone could say Pinocchio, Barry was dead. Curled up peacefully atop the altar like he’d climbed back in the womb. It was a Saturday.

We decided to bury Barry in the automotive section on account of the whitewalls he always kept on his beloved ‘89 Fleetwood Brougham. Of course, we had a service. Found a nice rosewood coffin in the End of Life section, isle 352 B. Got roses, lilies, carnations, orchids, and chrysanthemums from the greenhouse. We sang “Guten abend, gut Nacht,” lit amber incense, then marched toward the tire section, isle 563 A, while Steve sat in front of the calliope and played Chopin in B major. Everyone thought it was a beautiful ceremony.

I slept in the pews for a while when it was all over, so did Steve.

It was June when he broke ground. Still June when our house was finished. Right there next to the old abandoned church. Our own city of Ys off the coast of isle 567 and the corner of cornucopia. In July, I walk and see more houses. In February, I think they might stretch back as far as produce. It was hard to tell.

In April, I visited Barry’s grave because it’s a monument to us and fits perfectly in a Walmart city where you can go outside and walk through the isles saying hi to all your neighbors, letting them know when the next shindig will be. It’s next Sunday. We’ll have it at the old abandoned church. Make sure to bring some wine. You can find as much as anyone could drink, isle 169.

Saul Lemerond lives in Madison, Indiana. His book Kayfabe and Other Stories was published by One Wet Shoe Press in 2013. His poetry, non-fiction, and short stories have also been published in Gigantic Sequins, Word Riot, Ink & Coda, and elsewhere. He was a finalist for the Conium Review Innovative Short Fiction Contest and the Gigantic Sequins Flash Fiction Contest.