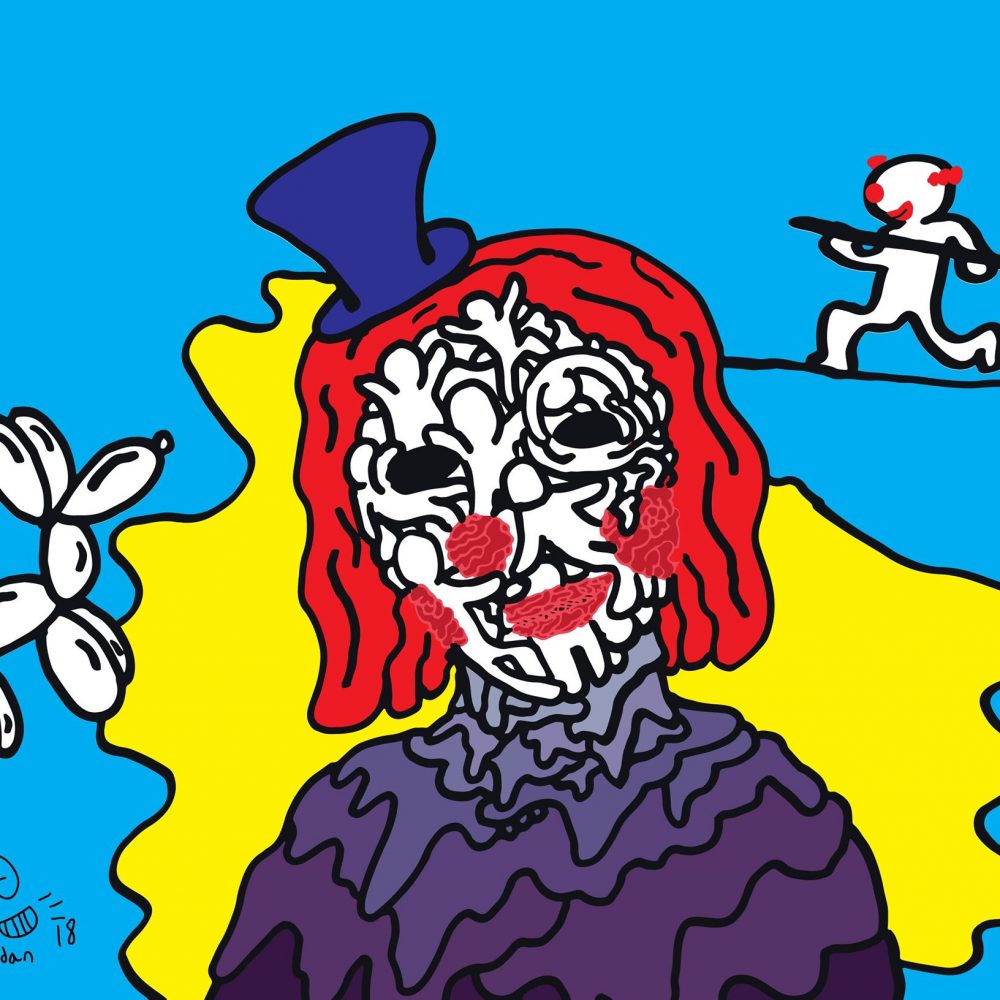 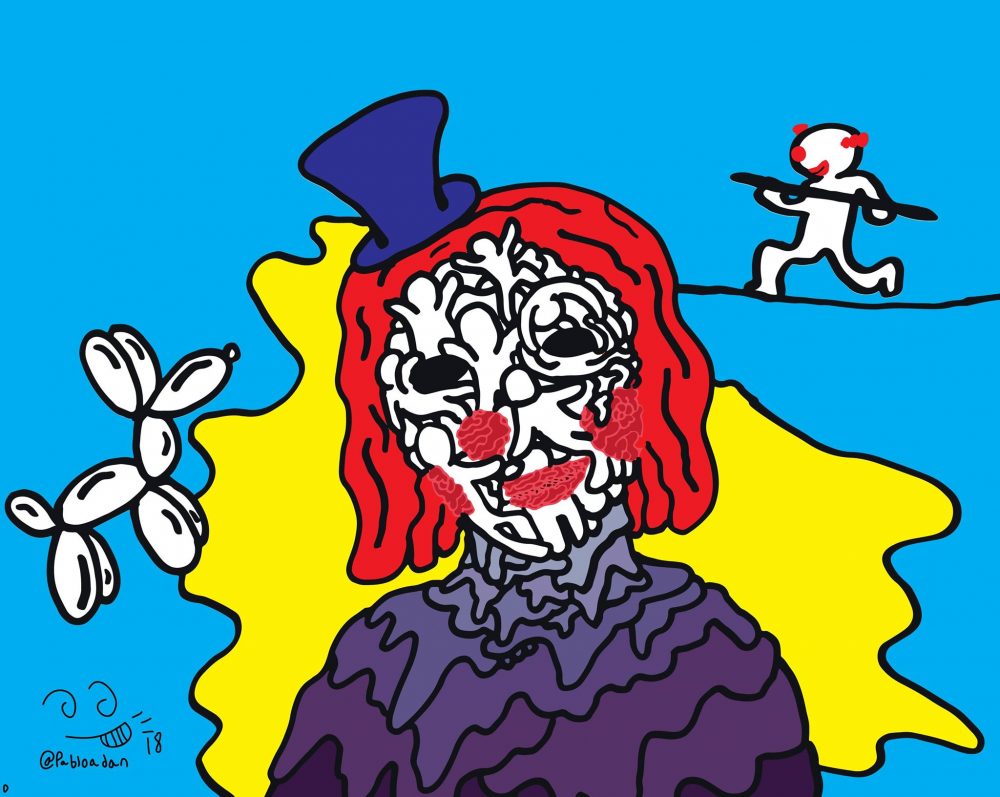 Your first clown wasn’t love, it was bemusement. Like — that actually happens?

Once he had just been in regular college, like you. But then he graduated and instead of going to graduate school, he went to clown college.

He came back after he graduated. He gathered a group of his friends. He came out as his clown in full on clown regalia. Giant shoes. Big red nose that, yes, honked. He was a Big Top American Circus type clown, now.

You weren’t into clowns, and to go to school to be one, well… good for him. Everybody has a dream. But now, you thought, at least you could tell people you knew a real clown. And it would be like a joke except it was true.

The next clown was after college. He rode in on a motorcycle. He put plastic wrap on his face. He’d wear a tight lace black dress and lipstick and smoke cigarettes.

He took you for a ride on his motorcycle.

He was a sexy clown.

You were married at the time.

Your husband wasn’t a clown, even though he did know how to ride a unicycle.  And once he had shoes that were kind of floppy, like a clown.  You met him in regular college.  He knew all the clowns you knew. But again, he wasn’t a clown.  He was a serious artist.  But it sometimes made him laugh when you cried. “Weepy Wee,” he would say. That was his way of making fun of you to make you feel better, to give you a joke name for when you cried, which was a lot.  He took pictures once as you were sobbing to show you how funny you look.

He didn’t mind that you had sex with a clown, as long as you told him about it.

You didn’t tell him the good stuff.

That clown, who you had sex with while you were married, was the only one in a room full of people who knew to jump when a giant mirror almost fell on your head — and he caught it in mid air, nearly flying across the room to grab it with one hand.

That clown saved your life.

The last clown was when you were getting divorced.

He was an Italian Commedia type clown. This clown had a room for rent and you rented that room.  He had just gotten divorced himself, and you spent lots of time talking.  You never had sex with that clown, but you really loved him. For a few months it was almost like you were not-having sex but married, living in that sweet little house with the yard and his dog and eating fresh things from the garden. And then, he out of the blue got a job with the coolest circus in the world, and he had to sell his house because he was moving for good to follow the big-top of the sun and the moon.

But he was the one who clued you in to who you really are. When you were listing all the clowns you had known he interrupted you mid-story to shout: “YOU’RE a clown!” Like the interrupting cow knock-knock joke.

Takes one to know one.

How long had you spent trying to be the tightrope walker, who is the one you always wanted to be — in a gold tutu walking the wire — only to belly flop into giant pie? Or the trapeze artist who can fly through the air and is caught by a partner, but instead falling headfirst into a bucket of cold water?

And you moved with your boxes into a tiny little place with falling down stairs that a friend called the ‘wacky shack’ and knew at last the reason you found yourself tripping over your own feet and walking into a stop-sign while having your head turned telling someone a very serious story.

You’d told yourself you were many other things, but clown knows clown.

A year later you found yourself in white-face hula-hooping and playing the accordion and two years later wearing a fake beard and  doing twelve long pratfall death scenes with silly string ‘blood’ coming out of a ‘gunshot wound’, and rolling over a series of giant wooden boxes.  You would come home covered in bruises that you never felt until the show was over when you would take Epsom salt baths and marvel at the blue-green purples of your thighs and cover them in arnica gel and then you would do it again the next night, legs rolling like you were in one of those looney tunes going through a machine — your body turned to putty and rubber.

And on and on you go, now you’re a supervillain in fishnets and a bustier doing the splits, now you’re breaking wine bottles made of sugar and doing spills into mattresses… now you’re greeting strangers who grin at the parasol in your hand as you walk in balloon pants just taking a turn about the lake…

You think of a painting of you on black velvet with tears running down your face and the title “Weepy Wee.”

Oh — why do you cry? Is it all your sad happy big shoe pratfall romances?

Is it because of… you, know… life?

Or maybe it’s because you wished so much to wear that gold-tutu and walk the wire, and instead if you’re lucky, your sorrow is low-brow joke art? Oh Weepy Wee…