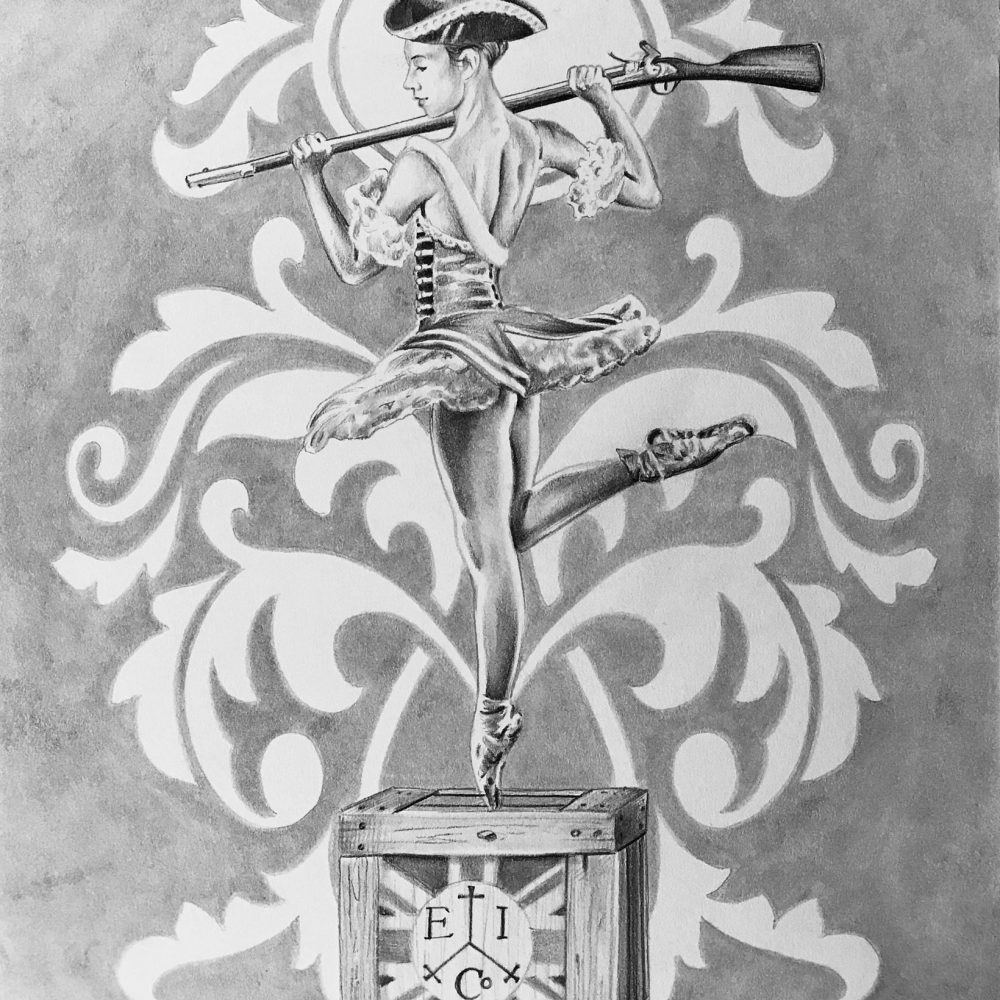 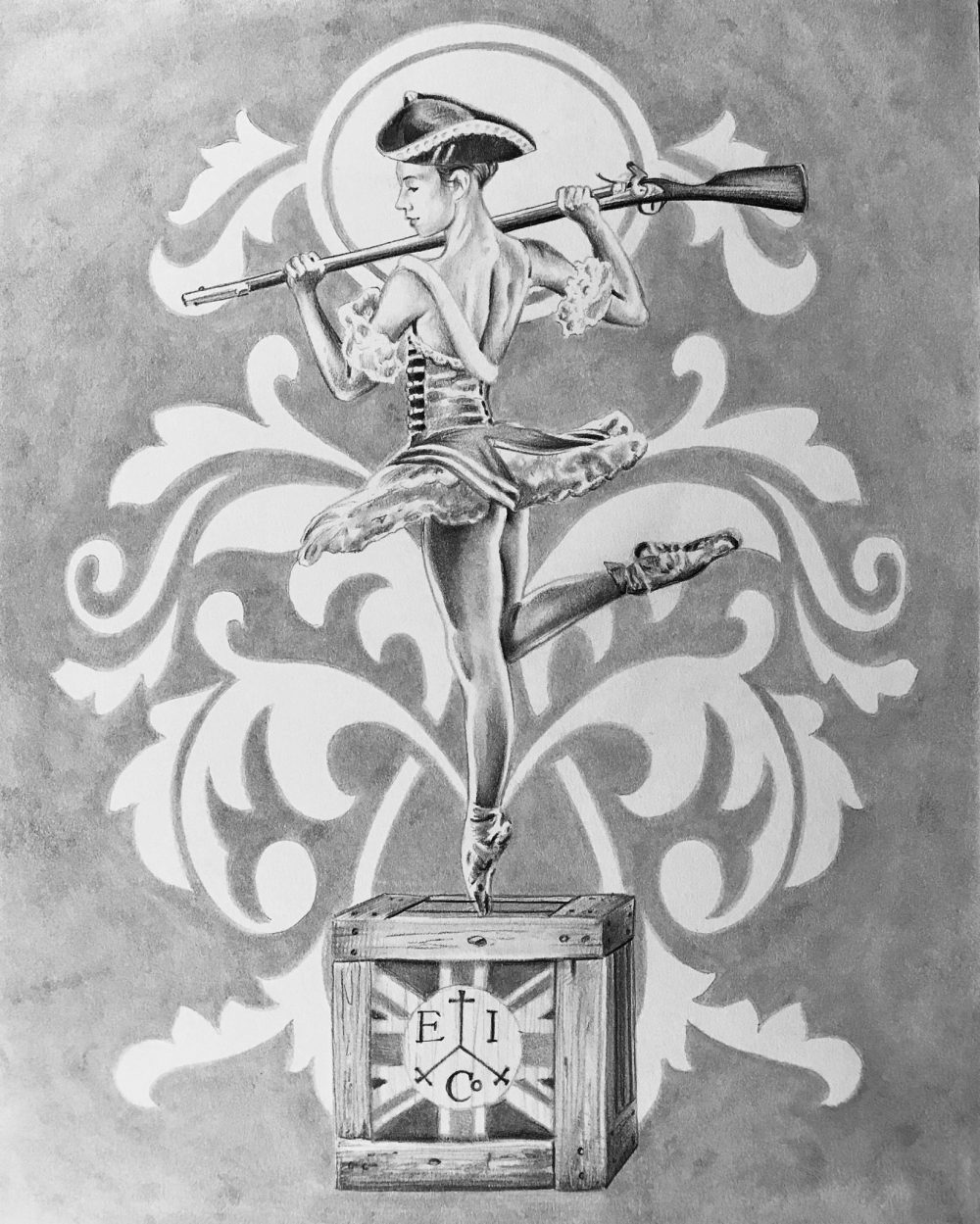 Violence broke out at last night’s debut of The Barrel Ballet’s new work “The Second Amendment.”

As the audience squabbled over seats, stagehands projected the following text on the back wall of the bare stage:

“A well-regulated Militia, being Necessary to the Security of a Free State…”

A dozen ballerinas representing “Liberty” sashayed up the aisles in flowing red and blue dresses and bowed silently.

Since the Barrel Theater prohibits recording devices, we have no visual footage. However, we can provide this public domain recording of Phillip Souza’s “Stars and Stripes Forever” to which the dance was set.

The Liberties pushed a ship branded “Colonists” on stage.

A Farmer, Trapper and Merchant jumped off the ship and began working.

The Liberties rolled wagons of Corn, Pelts, and Bags of Tea, to the appropriate colonist.

Redcoat Soldiers marched in and spun the ship around.

Redcoats distributed tea cups to every dancer on stage (including themselves).

The Redcoats plucked one bag marked “Tea,” one ear of corn and one pelt from each wagon, handed it to the respective colonists, and marched the wagons up the plank, onto the ship.

The Colonists protested and waved parchments while the Liberties applauded.

The Redcoats dropped an anvil labeled “Taxes” on the colonists, crushing them. They shredded the Colonists’ parchments and knocked the Liberties unconscious.

The Liberties awoke and helped the Colonists.

Some led the Trapper in musket practice.  Others led the Farmer in marching drills.

The remaining Liberties costumed the Merchant in Native American attire.

Redcoats ran up the plank and tossed the Rebels overboard.

Redcoats fired on them.

One waved a live pig.

Led by Colonial Children with piccolos, the Colonists and Liberties tossed a huge American Flag over the warship.

The Rear Projection showed red white and blue American Ideals spread across a map of North America and then the world.

Thomas Edison pirouetted with a lightbulb.

Henry Ford drove a car up the theater’s center aisle.

A moon dropped from the rafters; John Glenn popped out and waved the American Flag.

Dead Redcoats revived and shed their Uniforms to reveal the garb of Corporate Magnates, Dictators, and Tech Giants.

They yanked the Flag from the warship, now a tank labeled “Mid- East Texas Oil Co.”

The Liberties tore open the tea bags; sand spilled across the floor.

They marched with the Liberties brandishing rocks, AK47’s, and suicide vests.

They trampled the Current Leaders and hijacked the Tank.

One drove a car down the center aisle, crushing a Spectaor.

One swung a live pig.

Viral Code streamed across the back wall, jamming audience cell-phones.

John Glen doffed his spacesuit and, naked, fought the airship with a glowing sword.

At this conclusion, the crowd exploded. It is unclear who fired the first shot as both sponsors and several flautists proved armed. (Dancers’ prop guns are being tested.)

Panicked ticket holders called the National Guard but, mistaking the Guard’s arrival for an unpermitted publicity stunt on the part of the theater, local police intercepted the Guard and a skirmish ensued. Casualties and wounded numbers remain unconfirmed. Police Chief William Howe appeared to blame the Russians when he explained that despite the Guardsmen properly identifying themselves, “we thought it was a Stanislavsky-type thing.”  He noted that the “Crushed Spectator” was part of the show and uninjured.

The theater is closed pending investigation of porcine abuse.