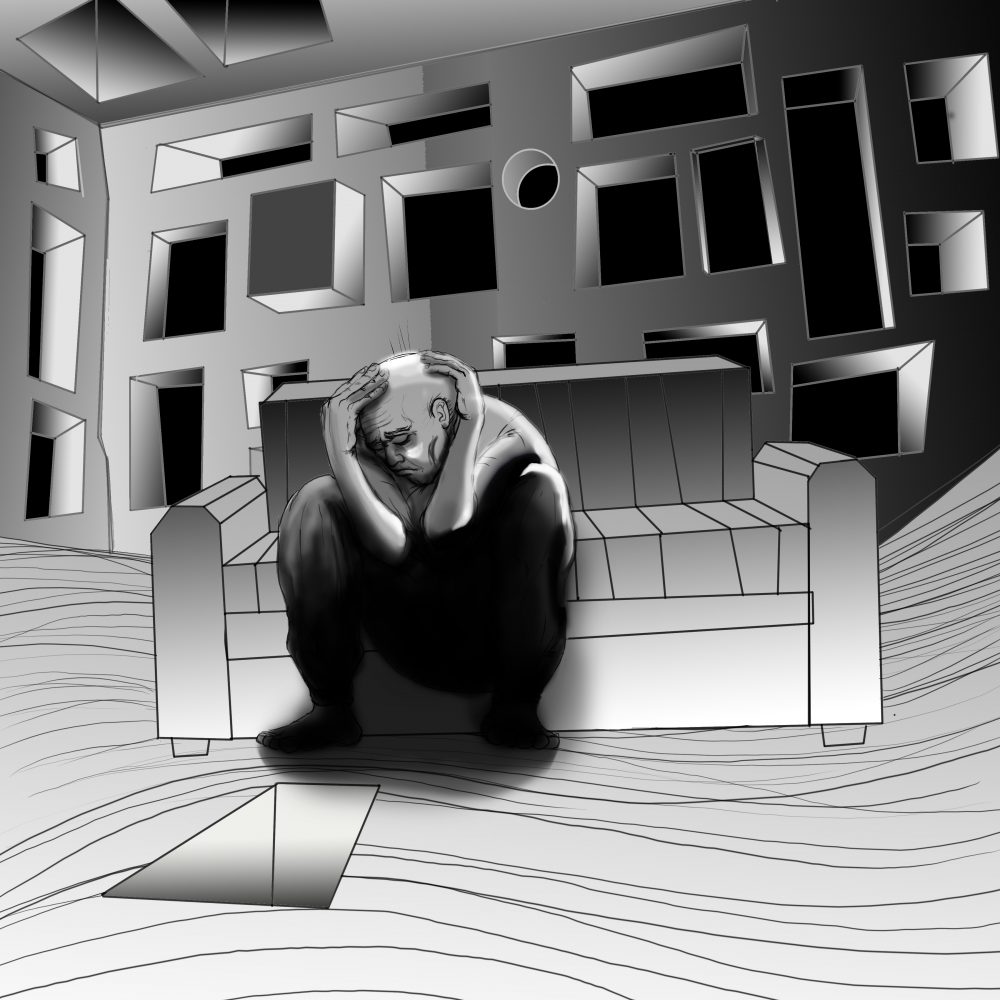 The other fisherman, the one on the knock-off box of fish sticks I like better, has a lot more soul in his eyes. You can tell he’s seen things, awful things, but he has this slight grin on his weathered face, like he’d tell funny jokes at a party. Some jokes for when the women were around, others for when they weren’t.

I wonder what kind of jokes he would tell in front of me? I don’t feel like much of a man these days. I feel like a decoration, a wobble-legged piece of furniture parked in front of the TV in my living room. It’s not much of a television to speak of–37 inches. That’s a big phone these days. Best I can afford since I quit going to work. Can’t please a woman with a television that small.

Still, my wife stays. God bless her. She’s still making the fish sticks, the ones I don’t like but haven’t told her I don’t like because she stays.

From the kitchen, she tells me Dwayne Johnson struggles with depression too. The Rock gets so low he has days just like the days I have. To hear her tell it, The Rock and I are practically the same person. God bless her.

But I can always get it up for the macaroni. I want to say it’s some misplaced nostalgia, some twisted association having to do with my mom making me the dish as a kid, but I think it’s just that the dish is easy to eat. It’s mushy. You barely have to chew.

I’m looking. Is she?

I imagine my depression working out at the gym next to The Rock’s depression. His depression is putting up numbers. Mine is wearing a goofy headband, sweating bullets on the Thighmaster. I picture us running, his sadness lapping mine.

While parked in front of the television, I watch a documentary that says he consumes 5,000 calories a day: eggs, steak, chicken, potatoes. Seven meals in 24 hours, each of them meticulously labeled. In a year he eats a ton of cod alone. I imagine the mastication involved with eating a ton of cod.

Even the mac and cheese sounds tiring now.

The timer for the oven dings, letting me know the fish sticks I don’t want are ready.

Did you know fish is The Rock’s favorite food? she asks me from the kitchen. I can hear the unrelenting optimism in her voice.

From my couch, I can smell what The Rock is cooking, but I’m just too sad to eat.

Barlow Adams is the author of two novellas(ReadLips Press, Grinning Skull Press) and an upcoming novel(Smarmy Press). His most recent publications include pieces in formercactus, Pine Mountain Sand and Gravel, The Disappointed Housewife, and The Molotov Cocktail. He is particularly proud to have his poetry included later this year in An Anthology of Poetry by Young Adults with Cancer by Finishing Line Press. He works out when he can, and can almost max out the thigh machine. Follow him on Twitter @BarlowAdams.