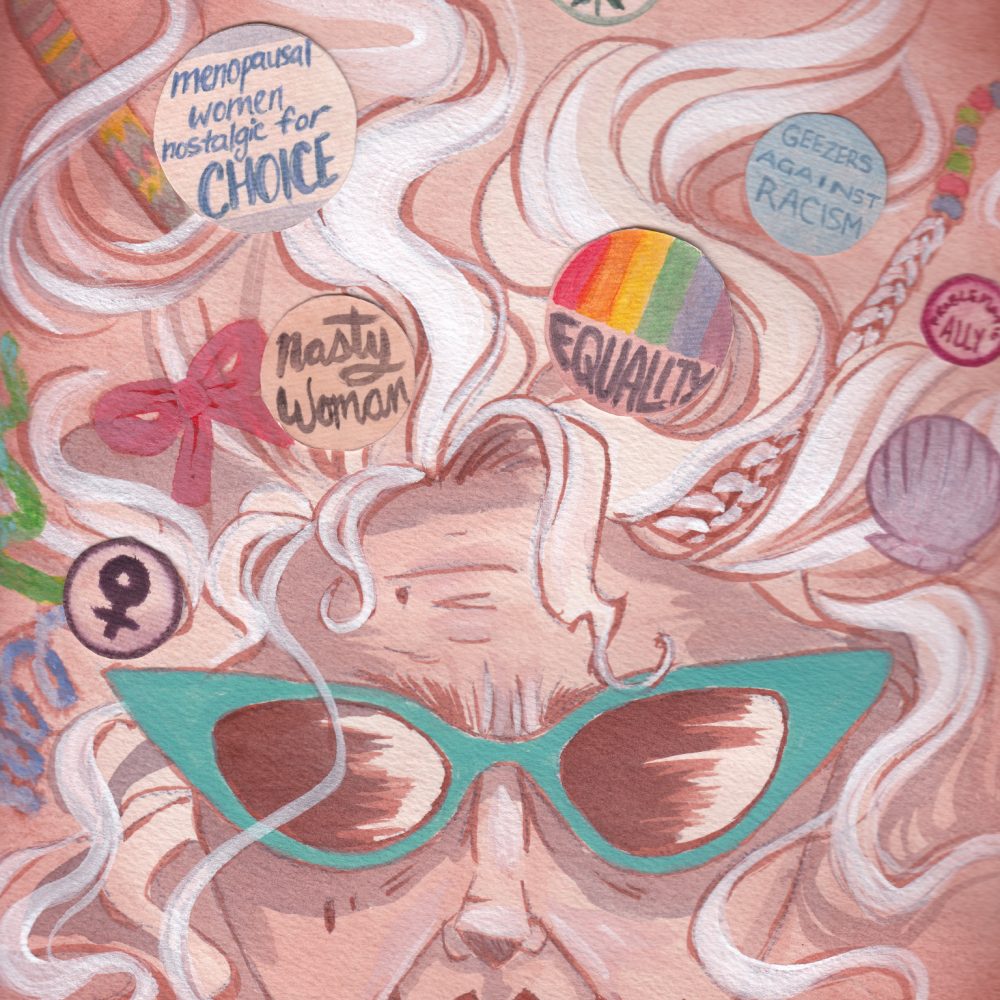 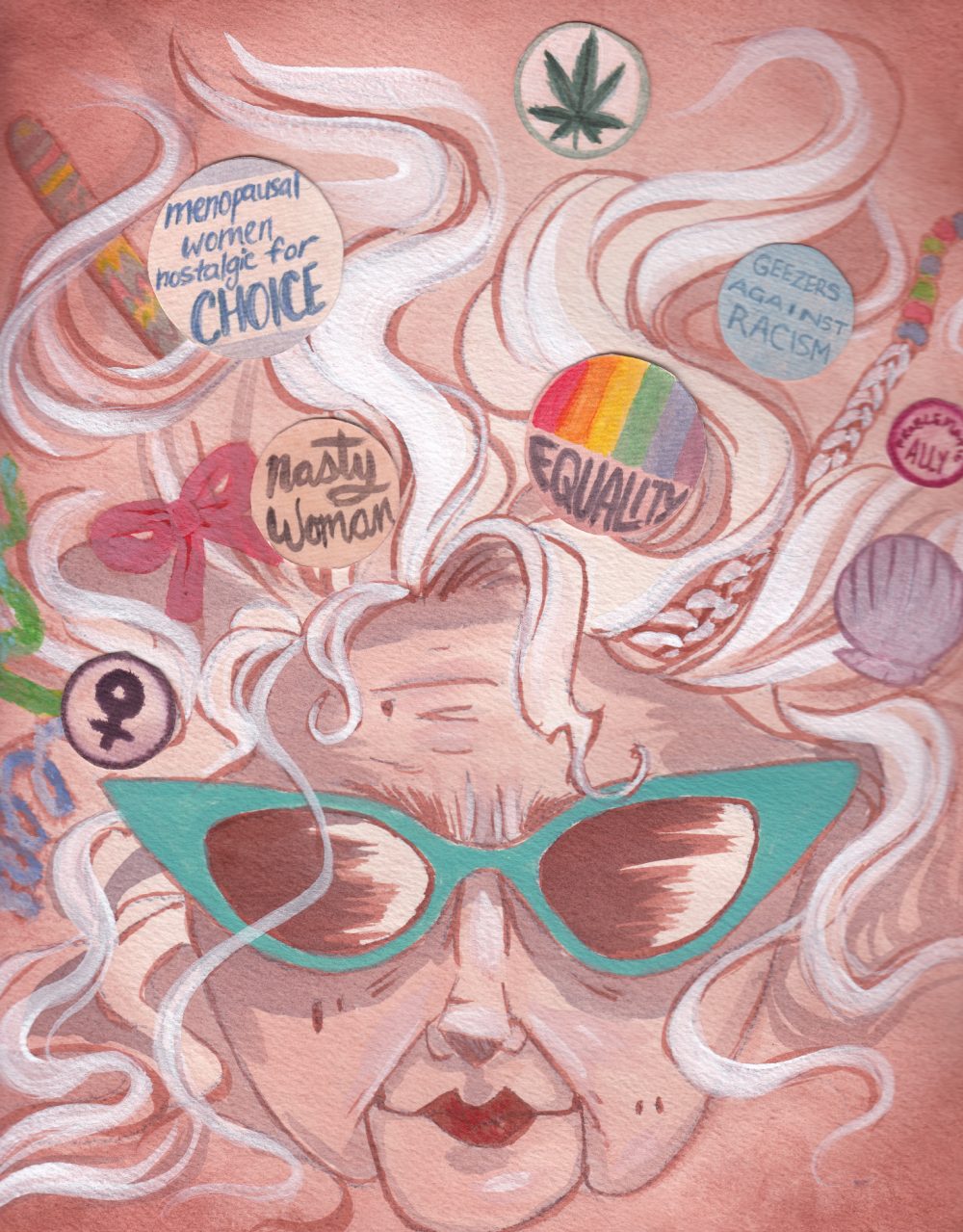 ‘Granny Bev’ – as she was known to the staff at the cafe where she drank two double-shot espressos every afternoon – was a renown social activist and artist. From 1961 to 1999, she coordinated dozens of domestic violence programs in refugee communities.

In lieu of flowers, donations may be given to The Women’s Wellness League, California Racial Equality Alliance, and Pacifists for a Greener Future.

“Boy, that Bev was a hoot. She had a dirty mouth and wasn’t afraid to use it. Everyone knew about her paintings, but most people didn’t know what a great poet she was. Why, she wrote the words to almost all our protest songs! My favorite was ‘Trees Have Rights’, which was sung to the tune of ‘Three Blind Mice’. She was also responsible for the classic ‘Shut Up, You Racist Fearmonger.’

I’ll never forget when the Geezers had a float in Sunnydale’s first Pride Parade. I’d only known Bev a couple of weeks then, and we were in charge of tossing crocheted rainbow doilies from the back of the float. All of the sudden, Bev grabs me and plants a big wet kiss on my lips! I was a little embarrassed, having never been kissed by a woman before. But something tells me it wasn’t Bev’s first time… anyway, the crowd went wild.”

“Now, my father used to always tell me, ‘Son, respect your elders.’ But Granny Bev? That woman pushed my buttons. I mean, I work hard to set my students on the right path. Bev did not do me any favors by smokin’ weed with them out in the alley and preachin’ to them about revolution and shit. ‘You’re supposed to be a role model,’ I musta told her a hundred times. ‘Act like one.’

Now, I would never say I was happy to hear about anyone’s passing. God rest her soul, for real. But, damn. I’m glad I won’t have to put up with that crazy old white woman’s shenanigans anymore.”

“I met Beverly Holiday when I was delivering at the cafe one day and she asked me if I had any stamps. Carriers don’t provide stamps, but I happened to have one in my wallet so I gave it to her. She said, “Thanks, handsome!” Then she told me her name and gave me a hug. I thought, What a sweet lady. Then I turned to walk away, and she slapped me on the ass!

From then on, whenever I saw her I’d say, “Hey, it’s my favorite Holiday!” And our little hug/ ass-slap routine continued unchanged for another five years.

My route won’t be the same without Miss Holiday.”

“Ugh, I’m sorry, but I did not like Granny Bev at all. She was always groping on me. I mean, I don’t even like it when my boyfriend manhandles me like that, and we’ve been together two years! Violating someone’s personal space is just plain wrong─ I don’t care how decrepit you are. She especially should understand that if she used to work with abuse victims or whatever. You have to treat everyone with respect, because you never know what’s in someone’s past. Sexual assault is not a joke. Sometimes I thought about doing it to her, just to see how she would like it. But then I would probably go to jail. Oh, well. Rest in peace, nasty cougar.”

“Foster care can be a nightmare, but I was lucky. I found my forever home only one year after I arrived from Cambodia. Mom always made me feel special and loved. Through her work, she made all kinds of people from different backgrounds know they mattered.

You miss strange things when someone dies; I miss hearing Mom’s long-winded voicemails. She left me one the day before she died, a five-minute story about how she’d accidentally grabbed the mailman by the crotch and they’d both had a good laugh about it. She’d already told me that same story earlier, when I drove her to her eye appointment, but I guess she forgot. I normally deleted those messages, but for some reason I didn’t this time… now I wish I’d saved them all.”

“My great-gramma is the best. Her house smells like strawberries and she always has mints in her purse. Her hair’s all long and white and she lets me braid it when she comes over. Once I did it all up with ribbons and beads, and I put a seashell in there and a popsicle stick I painted, and a Pokémon keychain and some pipe cleaners. The next day when she was on TV at the peace march, she kept her hair the same and she said my name when the news guy interviewed her.

Maybe they can march together in Peace. That way Great-Gramma won’t get too bored, and Tito won’t hafta miss his wheel so much.”

Gina Yates has written two novels and is exploring short fiction while she waits for her agent to find good homes for them. She lives in Albuquerque, New Mexico, where in addition to writing she owns a small eclectic vintage clothing store and hosts weekly karaoke nights. She is also the youngest daughter of the late celebrated author Richard Yates.