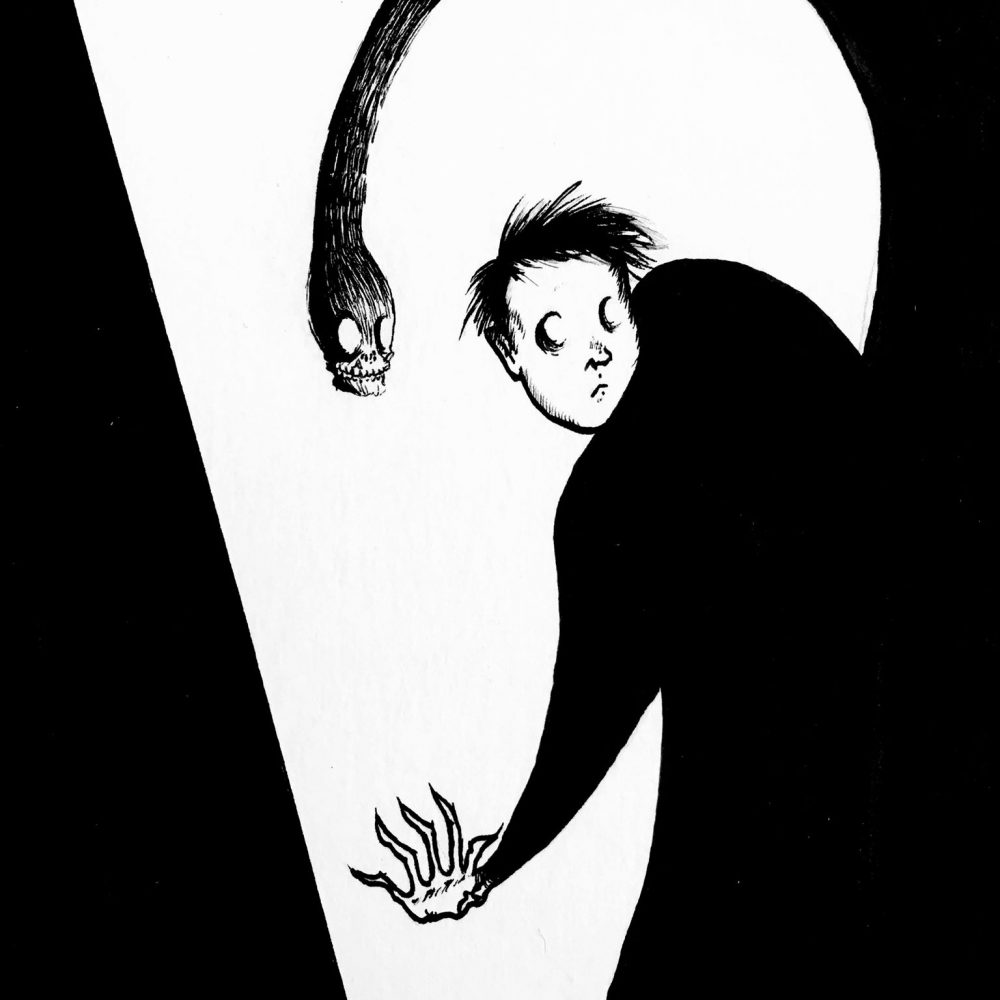 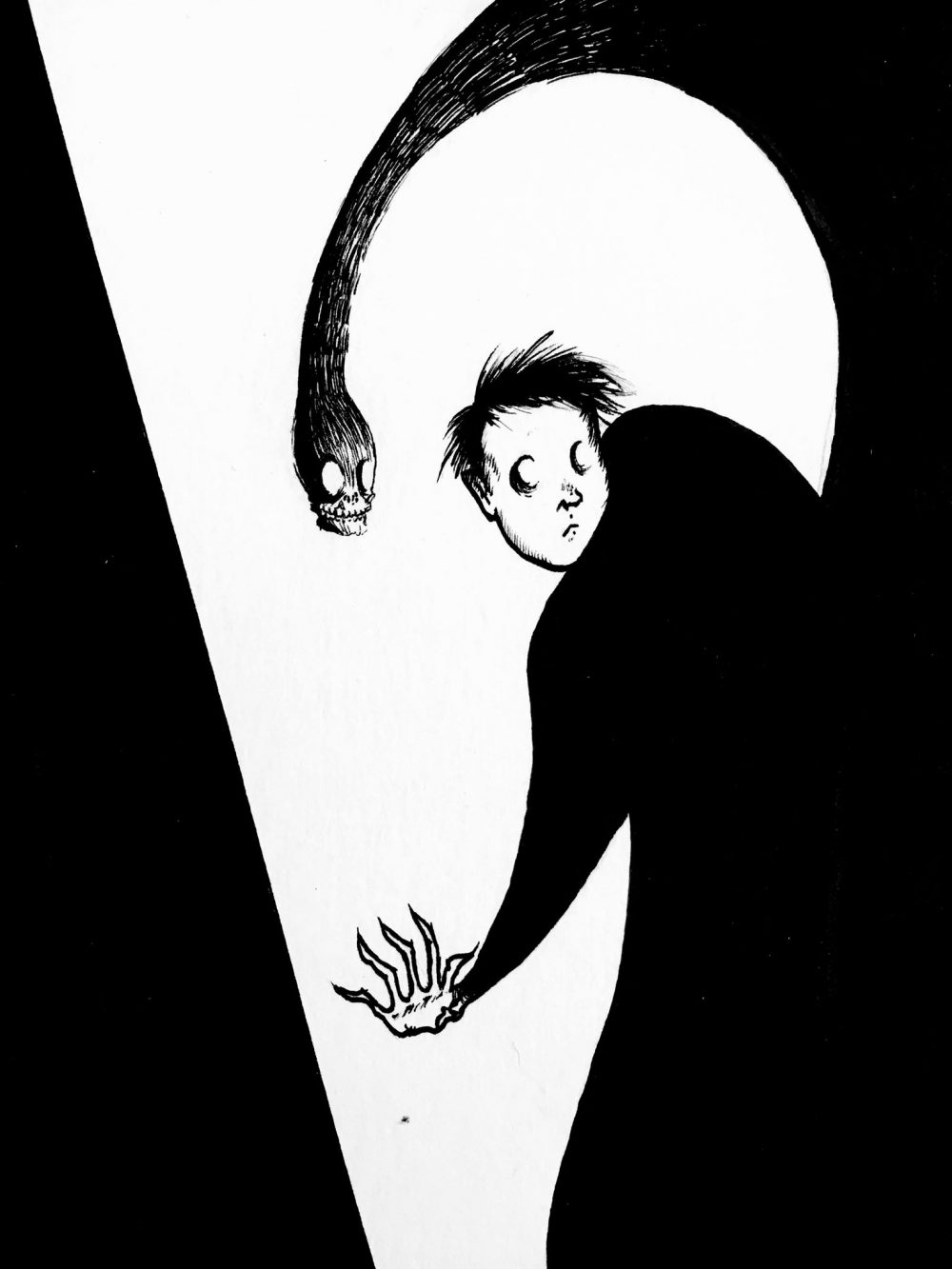 I pay $5 of my tip money from the restaurant to hear this from a psychic that smells like tobacco and patchouli oil. Fake metal bangles hang off her thin wrists and two gaudy, worn hoops of gold loop through stretched holes in her earlobes. There’s a green hue from where the metal rubbed too close for too long. Her chocolate hair is overly curled. Everything about her walked out of a bad internet ad for a racist gypsy costume.

She told me my fortune with a serious face, like I’d been caught drawing crude things on the bathroom stall. And, like a kid who was indeed caught scribbling cartoon penises and overly proud of it, I just try not to smile. I tighten my stomach and hold on as long as possible as the thread between us stays taut and electric. Until she snaps herself. She stands like a jack out of its box and shoves me away for the next sap to sit in front of her.

“Anything?” Rachel asks when I find her again in the crowd. I take her hand.

“Good day for it. Weather is going to be shit.”

We stuff ourselves on fair food and get drunk on cheap beers at the pop-up beer garden made out of taped together patio furniture. When we part ways that night I have a restless, sweaty sleep and wake up with a headache and liquid, useless limbs.

Well, it wasn’t going to be the best last full day on Earth. But it was far from the worst way I’d woken. I shove down a breakfast sandwich leaking melted cheese, crunching extra bacon between my teeth. I dip each bite into a salty, orange sauce. I pair it with a Diet Coke and a few pops of Advil and I have a cushion for my head for the next six hours.

For my last full dinner I order a pizza after work and stay flopped on my couch watching ghost hunting shows in my boxers.

I sleep better. I wake up once, at 3:07, to the usual sleepy panic of a half woke brain. I see a dark figure in the corner of my room. I blink it away. It was not real. I dream about the fake psychic at the fair and her staring eyes. I dream about her until noon.

Wanna go bowling? Rachel asks over the phone as the rain comes down in sheets. I was never more happy than when we reached the point in our relationship of wearing sweatpants on dates. Her, no makeup. Me, unshaven.

Sure. Why not do something incredibly tacky for my last day? Attaboy, Mike.

The bowling alley smells like mechanical grease, cheap frying oil, and the mist of sterile shoe spray. The sound of crashing pins competes with the thunder outside and I bowl a 180 for the first time in my life. I get a green teddy bear out of the claw machine. I won a free round of bowling for guessing the number of jellybeans in a jar almost perfectly. A string of luck leading to my ultimate demise at midnight?

When the alley closes but the lowbrow, suburban bar next door stays open with $2 pitchers of Bud Light, we get wings. I take a tangy bite and gnaw at the remnants still latched to the bone as the clock strikes 12:01 and I’m still sitting with barbecue coated fingers. Alive.

We laugh. I wipe my fingers on a worn napkin.

The week goes on. Nothing changes. Its pace remains arduous. I go to my crappy, part-time job. I eat potato chips and beer for two meals a day. I walk past the homeless guy panhandling on the corner of my street and avoid all eye contact. I forget about the psychic until the following weekend when we’re back at the fall fair because there’s little else to do in the tiny farm town.

I see her sitting at her same booth, in her same worn clothes, with the same line of teenagers standing outside to get their love lines read with nervous energy. To get to the funnel cake stand we walk past her. Her face turns to mine like a magnet. I wink. She does not smile. She stares, calmly, without emotion.

Nothing changes. I get the feeling she might have stared into the end of the world once and nothing has interested her since. She’s calm. “I know.”

I do not sleep the night of October 14th every year after that.

Melanie Moyer is an author currently living in Philadelphia, PA. Her debut novel, The Rules of Me, was published April 2018 through Waterton Publishing. She's had previous work published with Ghost Parachute and is a contributor at Popsugar. She's an avid horror fan and pizza maker.