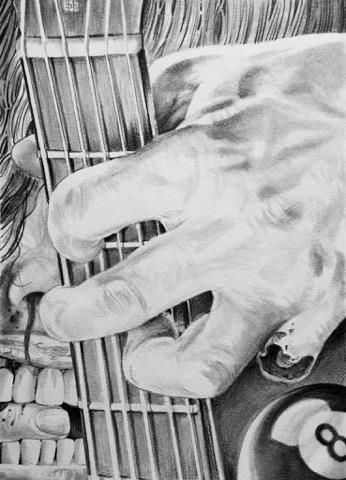 I farted around at the poker table in the back of Old Dog’s Tavern with a bunch of sober old people, bored out of my eyes, trying to catch a good rum buzz and failing, the juke box zig-zagging between blues and country songs.

My buddy Knuckles was shooting pool for money instead of flipping cards with me because he hated being around old people, “grey heads” he called them, said they smelled like fear. When I took a break to grab another rum and meandered over to check his temperature, he met me at the bar.

“We burned the pot up to a hundred a game.” He had one of those big furry Russian hats on. It was brown.

“Wow,” I replied. “Is that the guy whose band played last night?” I pointed at the man across from us in a blue top hat and a leather jacket the color of wet redwood.

I studied the table, and it was all tied up, two balls left a piece, a pile of tens and twenties in a mess on the rail. Lyle Cruz leaned in, his straight black hair waterfalling down onto the felt, and missed.

After Lyle stood up and sighed, Knuckles clapped once and scanned the table.

“Damn,” Lyle said, calmly. Underneath that blue top hat, he had a fuckable face if you know what I mean, real clear skin, symmetrical features, no five o’clock shadow, lean figure.

Knuckles sunk the nine-ball in the corner pocket, and Lyle still seemed mellow, drinking his golden beer directly from a big glass pitcher, no pint glass.

Then barely, by an ass hair, my friend Knuckles missed his next ball, the blue ten stalled ever so close to the center pocket. “Come on,” Knuckles said, trying to will the ball in as if by magic.

Lyle crouched up to the table, then, called his pockets, and sunk two solids in one shot. Only the eight-ball was left for him to drop, and the cash would be all his.

“Fuck…ok…ok…nice shot, nice fucking shot,” Knuckles conceded. It was all but over.

Lyle chalked his cue with a cube of blue then had another drink from his pitcher, taking his time. “All My Exes Live in Texas,” shot out of a busted speaker in the ceiling above us, and then finally, after two hours of making us wait, finally, Big Polly stumbled in, but she was obliterated, absolutely shit-canned, but, somehow, yeah, there she was, still standing, in her usual uniform: the flip-flops with socks, the XXXL white t-shirt, the XXXL basketball shorts. The night had undone her long hair in a brunette hurricane around her.

“Is this the money you owe me, Knuckles?” Big Polly slurred, slamming her big paw down onto the pile of cash on the rail. When she did, she biffed her hip against the pool table. Knuckles’ ten ball fell into the center pocket.

“Shit,” I said. Knuckles had escaped.

Not so fucking easy for Lyle Cruz, however, who at that moment was taking off his blue top hat nonchalantly. Then, to everyone’s surprise, Lyle slammed that big glass pitcher over the back of Big Polly’s head so damn hard that it exploded.

With her paw still resting on the pile of money, Big Polly went down to one knee. Lyle had his pool stick above his head about to crack it over the back of her like an axe, but before he could, Big Polly got her free arm around his leg and ripped him down onto the shitty floor beside her.

It was a maelstrom of elbows and fists and hair then, Knuckles and I sitting next to each other on a couple of stools, smiling.

Lyle squirmed over onto his side, grabbed a handful of hair and put two big punches into Big Polly’s face. It looked like it might go his way then, too, that is, until Big Polly started using her weight, shouldering her body over on top of the lean guitarist and never uttering a word while they wrestled it out, and Lyle, too, remained oddly, almost eerily quiet throughout the fight, that is, until someone, we weren’t sure who, let out a pig-like squeal that stopped the whole bar where it was. Bartender Timmy cut the music. The crowd circled. Blood gathered in tiny red slicks on the ground around the two fighters as if from a bad transmission. I thought maybe Lyle had stabbed Big Polly with a knife made of glass.

But stumbling to her feet first was Big Polly, her massive cheeks and the chest of her shirt bloody, a purple mountain rising above her left eye. Out of her mouth and onto the green felt of the table came the pinky finger which had been, only moments ago, attached to Lyle Cruz’s left hand, his fucking fret hand.

Big Polly started half-dancing, drunkenly, sprinkling the ten and twenty dollar bills all over Lyle who was sitting up by then and staring at the new space on his hand in disbelief.

Bartender Timmy produced a bucket of ice, but Lyle waved it off. He gathered himself for ten minutes or so, and then he limped outside too, leaving the money behind.

When we got out to the sidewalk, we found Lyle Cruz with a red bandana stuffed into his pinky wound, his leather belt cinched crudely around his hand. He sat on the tailgate of a blue Toyota, feeding red shells into a double-barreled shotgun.

“She forgot our coke,” I remembered.

“Well I’m up a hundred,” Knuckles shrugged. The two of us walked back inside.