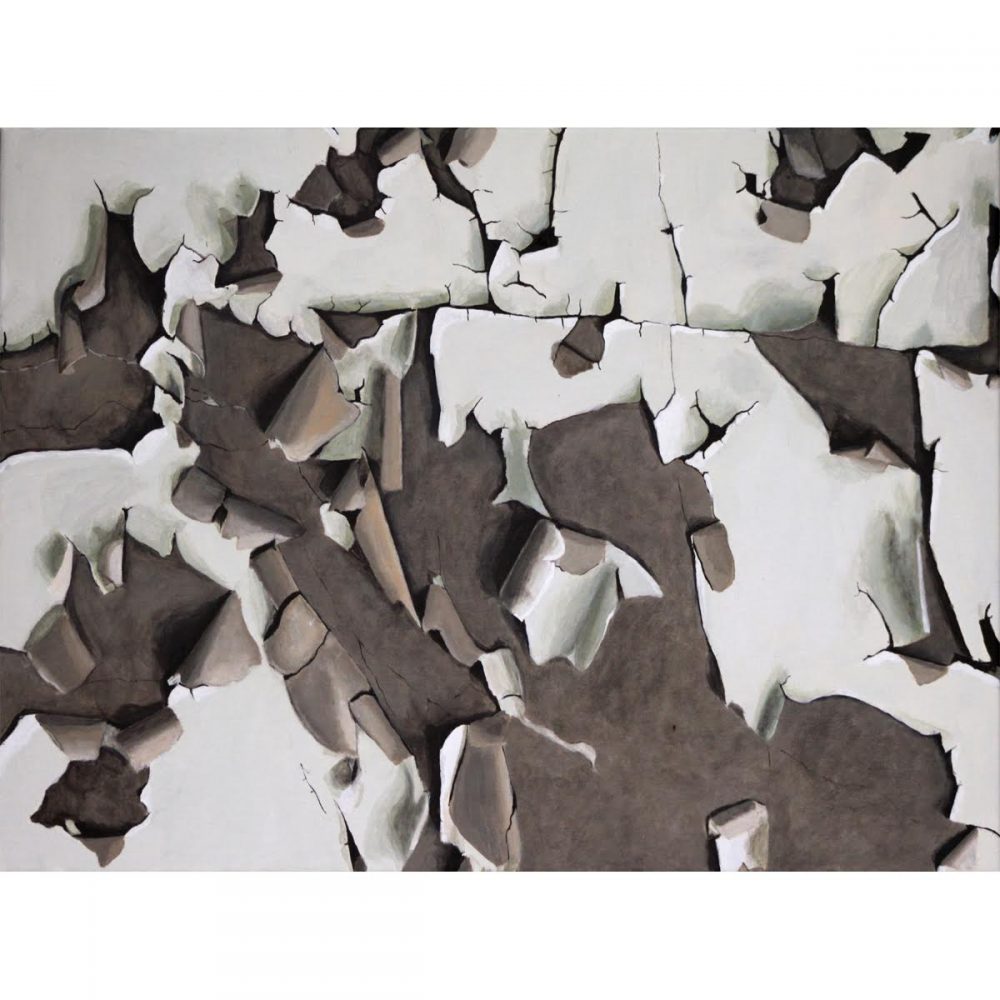 The stripping away began with a bit of peeling paint in the corner of the living room. It was one tiny tear on the wall, unseen from a distance. When Catherine first noticed it, she thought it was a scratch. She ran her hands over the mark and a slit was exposed. She slipped her finger under and it pulled up a bit. She pulled harder and a gummy piece of latex paint came away from the wall. She grimaced at the corner, upset that she had ruined an otherwise excellent paintjob.

The next day, Catherine noticed another bubble, not far from the first. She poked at it with her fingernail until the paint started to peel away from the wall. It stretched until it reached the first cut, making one large hole in the wall. Beneath the paint, she saw nothing.

Each day, a new bubble appeared. It spread from wall to wall, even overtaking the pictures hanging on them.  She was shocked at how easily the photos peeled away, first her smiling face, then Charles’, leaving nothing in their place.

When the stripping away of her living room was complete, she pondered what had happened.  The room was, but now wasn’t. Had it ever been a living room, or was it always nothing? She asked Charles what he thought and he commented that he hadn’t noticed a difference. She moved on to other rooms in the house, with methodical but unreasoned persistence. The tile wall they had built in the kitchen, the family portrait in the dining room all peeled away with no more effort than husking a piece of corn.

The stripping away continued into other rooms and places. Catherine found that the more places she visited, the more nothing she was able to find. She and Charles went to dinner at their favorite restaurant. By the time they left, she had peeled away her half of the setting and the black and white picture above “their” table. It had been a picture of a monkey riding an ostrich that they had always laughed at. Charles pointed to nothing and laughed. Catherine was confused.

Their bedroom peeled slowest. Day after day, she pulled miniscule bits away. She didn’t understand what compelled her to continue, but she felt she needed to finish. Charles seemed not to notice the changes at all. It was months before she was able to sit crisscrossed on her bed surrounded by nothing. She closed her eyes.  For a moment, she allowed herself to think that she had imagined the stripping away. Charles came to sit on the side of the bed and she looked to him. His head was down and his eyes speaking guilt. Catherine reached out and peeled his face. She peeled his arms and his body until nothing was revealed.  He spoke and his words entered the air and become nothing. She closed her eyes again and tried to breath in, unable to imagine a full world again. Nothing entered her lungs. Nothing embraced her. Nothing comforted her. Everything that was disappeared.

Josie Myers received an MA in English from West Chester University where she won an award for fiction and is now a member of the Bethlehem Writer's Group. Her work has been seen in "The Story Shack," "Dali's Lovechild," "Literally Stories," "Writer's Roundtable," and the 2016 anthology "Once Upon A Time."