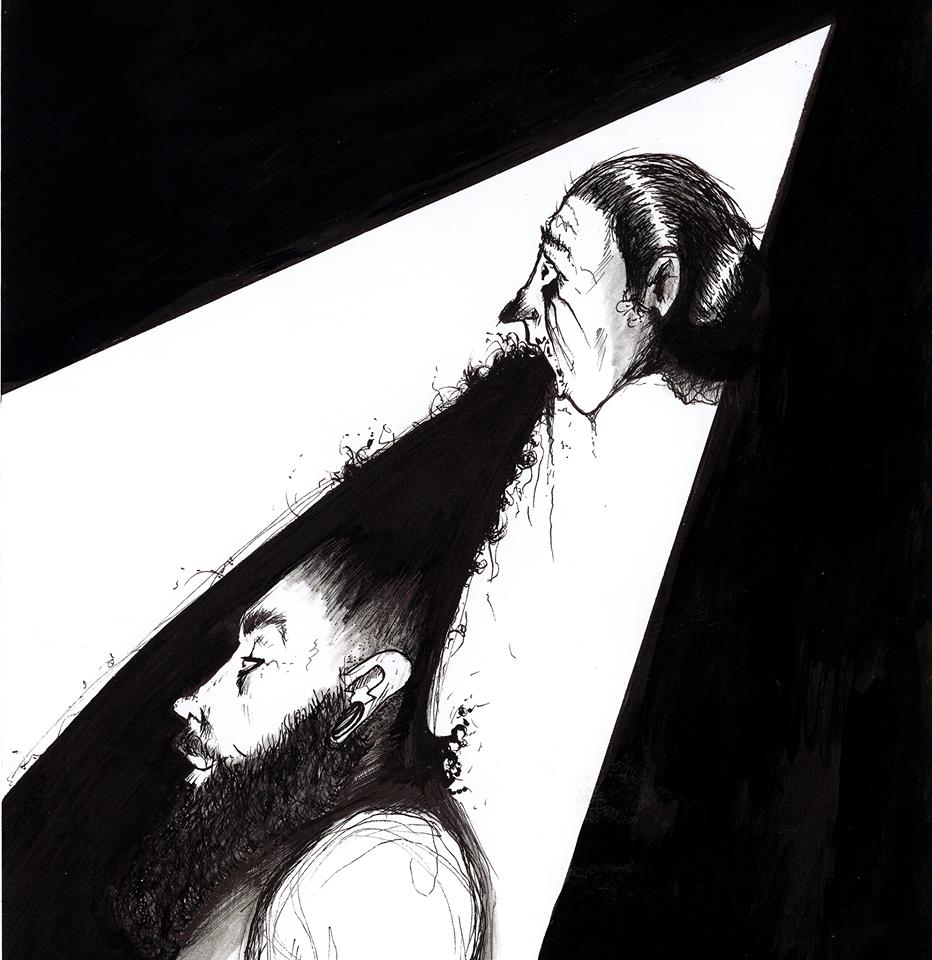 “What’s it say?” Dan squinted at the piece of notebook paper.

“Sound out the letters,” Shelley said. He paced in front of Dan.

“Say them aloud then. Sound them out.”

Dan dragged his eyes slowly across the crudely drawn logo, a mess of thick Sharpie strokes, and mouthed the letters. “It doesn’t -”

Dan blinked hard a moment, then let his eyes rest on the center of the drawing. “I don’t-”

Dan pulled his eyes away. “He did?”

“Fucking A. Ben saw it in like three seconds.”

“He loves it. Loves the name. Says it makes him want to puke.”

“Real nasty. He said he doesn’t even think the tee shirt place will print it. It’s that gnarly.”

Dan glanced at the 30 rack of Pabst in the corner of the basement. Shelley had been tossing back cans since Dan arrived.

“Where though? I thought I saw his car outside.”

Shelley sighed, “You’re taking too long, dream boy. Do you even want to know what our new band name is?”

Shelley hushed Dan. He put his thumb on Dan’s chin and gently turned his head back to the notebook paper. “Read it. It only makes sense if you read it.”

“You keep saying that. More I relax my eyes, the less I see. My eyes are starting to hurt.”

“If you don’t read it, I’m going to break your hands.”

Shelley was twice Dan’s size and twice his age and scary when he drank. Dan had seen him get violent before. Put his own head through the van’s window. After a show one time, to scare a teenage girl that was hanging around, he slit his wrists. Just enough to scare her. Substituting musical talent for theatrics.

Shelley looked at Dan with two bloodshot eyes. “So read the fucking name.”

Dan’s mouth was dry. He looked back at the paper. The drawing had changed.

“Read it quick then. Before it changes again.”

“Changes? Fucking…what is this? Where’s Ben?”

The thick black lines of the logo swirled in front of Dan’s eyes. He dropped the paper and started to fall over. Shelley caught him.

“Did you see it?” Shelley said, easing Dan onto the couch.

Dan pressed his palms into his eyes.

Dan told Shelley what he’d read. Then Dan leaned over the armrest and vomited on the concrete floor.

Dan wiped his face off with his shirt. “I don’t understand.”

“Did you eat today?”

“Food, dream boy, did you have any today?”

“Different for Ben, yeah. I think, each time…” Shelley trailed off. Started looking behind the drum set.

“Was that Ben’s car outside?” Dan said.

“Did you have anything to drink?”

“Where did you, oh Christ, where did you get the drawing? The logo? Where-”

“From a man lives behind the 7-Eleven dumpster. Traded it for some smokes.”

“He said it was the most metal band name of all time. I’m certain it must be. Listen, I need to know, did you have anything to drink?”

“Before you came here?”

Shelley sneered. “Fucking…where is, here.” He lifted a water bottle from behind the drums and handed it to Dan. “Drink this.”

“Water. You just puked. It’ll take the taste out of your mouth.”

“Why does it…it looks cloudy?”

“Fuck’s sake.” Shelley grabbed the bottle and tore the cap off. He grabbed Dan by the hair and yanked his head back. Dan screamed. Shelley wedged the bottle in between Dan’s lips.

“Your own good,” Shelley said and squeezed the salt water down Dan’s throat. “Fucking own good.”

Dan held it down for a couple seconds and then vomited most of it onto his lap. Drool hung down his chin. He panted, “What’re you…doing to…stop it.”

“Say the name again. The one you read. I can’t decide which I like better.”

“Between the one you saw or Ben’s. I can’t decide. Say it again.”

Dan said it again and screamed. He grasped his stomach and put his head between his knees. Through the tears he saw something next to his feet. Ben’s glasses.

“Ben?” Shelley said. “Not here anymore. Could you, no, you know what? I think I like the name you saw better.”

Dan cursed some more and cried and fell face first off the couch. He wheezed a minute then stopped breathing.

Shelley stared at Dan for a few moments, then said. “It’s the most metal band name of all time. I’m certain it must be.”