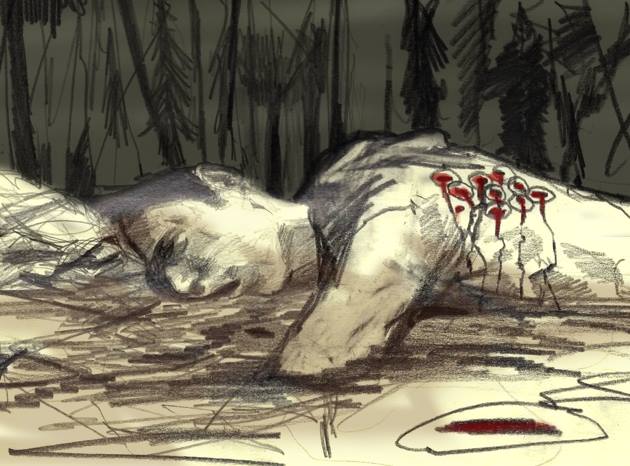 He squeezed the trigger – a shot slid into the thick sludge.

“Stop! What’re you doing?” I shouted.

John smiled but didn’t look up.

“What? It’s just mud. I can shoot whatever, whoever I want on my own property, can’t I?”

John walked along the grassy edge of the mud pit, his eyes scanning the crusty top.

“What if you kill someone?” I said. I walked closer to the edge of the pit and pulled up my dress past my ankles to keep it out of the mud.

“Good. That’s exactly what I’m tryin to do. Fucking punks rolled up on my lawn.”

Thirty minutes ago I was about to go to sleep when I heard the helicopter. I looked out the window to see spotlights scanning the cornfield. I got dressed and went to the front porch. John was already there, standing by the stairs, balancing his rifle on the ledge.

I couldn’t see anything at first. The road is always pitch black. Then the moon came out from behind some clouds and the light reflected off of something. Something dark and slow.

Then in a quick flash, I saw it, a metal hood ornament. I could make out the rest.

The car’s headlights were turned off and all I could see was the light reflecting from the ornament and the thin metal frame. When it got closer I saw two dull red lights. The car, still maintaining its slow pace, turned into some brush. Then they were gone. I didn’t hear anything. No crash, no screaming, nothing.

The helicopters moved on to search the neighbor’s farm.

I jumped when John clapped me on the back. He had on his mud boots and had his rifle slung over his shoulder. “Come on.”

“Come on what?” I was afraid to leave the porch.

“He’ll be long gone by then, honey. Besides they can’t do shit anyways. Probably stole the car. What the cops do for your brother’s stolen car? Remember? Fuckin’ nothing. Wrote that he was a dumbass on a piece of paper. Told him what part of the shit side of town that he could find it in the morning. Got him a free pair of dice outta it though.”

I sighed and followed him.

Now the car was sinking and gurgling, half-submerged. The red car lights were getting dimmer under the muddy water. The driver’s door was slightly open. John kicked it wide open and looked inside. The car was empty.

“Where the fuck is he?” John said. He began wildly shooting at the mud.

Then I heard it. It made a popping sound right by my feet. I screamed.

It looked like a wet pile of clothes, soaked in mud and blood. John froze for a second then yanked the body out. He could only get him halfway out, his legs still buried.

John turned to me. “Get inside! Call the police!” He smiled. “I fuckin got ‘em!”

I ran towards the house. I got halfway there and turned around to look at the scene. How would this appear to the police? My husband happily standing over a body sprayed in the back with a shotgun. He would think of something, I know. As long as I went along with it, he’d be fine.

Then I spotted him. Standing on the far side of the mud pit, in the cornfield. A teenage kid covered in mud. He must have crawled from the other side of the car, maybe the window. He eyes were fixed on the body John was positioning. The boy looked up and saw me. He backed up and disappeared into the field.

I smiled. I know what happens now.

In twenty minutes John would see the blue and red lights coming down the dark road. This time for him. He would take position in the center of the road.

In twenty-five minutes John would aim his shotgun. Five would aim back.

Casey Schwarz teaches physics at Ursinus College and lives in eastern Pennsylvania with her husband and handsome dog. She loves science and crime stories.