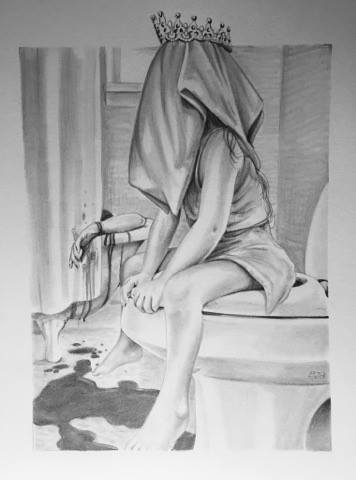 Joshua splashed his face and looked in the mirror. His cheeks, his shirt, and the shower curtain reflected behind him were splattered with blood. Rosy suds ran off his hands, down his elbows, and dripped in the sink before swirling in the gush from the faucet. Someone rattled the locked door.

Josh turned to see his wife in the tub. Slashed and horrific, almost alive. The shower head dangled on its hose, an upside down flower, undulating as it spewed water. Josh reached for it and sprayed down the bathroom. “Can you hold it?” he asked.

“No,” there was panic in Tabitha’s voice, “and I have my Tinkerbell undies on!”

“Oh, OK.” Josh said. He hosed down his arms. His shirt. There was so much blood. Josh

yanked the shower curtain closed. “Count to ten.” Nothing like this had happened since high school.

Josh chimed in with his daughter. “Four.” He shouldn’t have touched anything. Everyone knew Julie was suicidal. “Do you want – “

“–ice cream?” Josh dowsed his hair. He must have found Julie and blacked out. Those were deep cuts. Maybe — probably — he’d struggled to save her. He should call 911. Josh grabbed a fresh towel, whipped open the door and covered Tabitha’s head like a birdcage. “Blind

Man’s Potty!” Josh scooped his squealing little girl in his arms, lifted her over the mess and settled her on the pink flowered potty ring. “If you do Blind Man’s Potty, you get ice cream for breakfast!”

“That’s the rule. We’ll wash your hands in the kitchen.” The kitchen looked fine, but Josh

wasn’t taking any chances; he had to protect Tabitha’s mental health, so he kept her covered and dried her wet hands on her toweled head. Tabitha giggled. God, he loved her. “Blind Princess to the car!”

“It’s Blind Princess Potty PJ Ice Cream Day.” This would work. Josh had clothes in his gym bag. While the engine warmed up he changed in the garage and dropped his bloody garments in the washing machine. Julie had committed suicide and Josh’s first instinct was to make sure Tabitha didn’t see anything traumatizing so washing the bathroom, leaving fingerprints, getting his daughter out of there — everything made sense. He’d call the cops from Friendly’s and then, the moment things calmed down, he’d take his meds.

“Yes! And you can take the towel off too.” But Tabitha liked the towel. She kept it on as Josh held her hand crossing the parking lot, as they climbed into the booth, even as she ordered from the waitress. She didn’t take it off until her ice cream arrived.