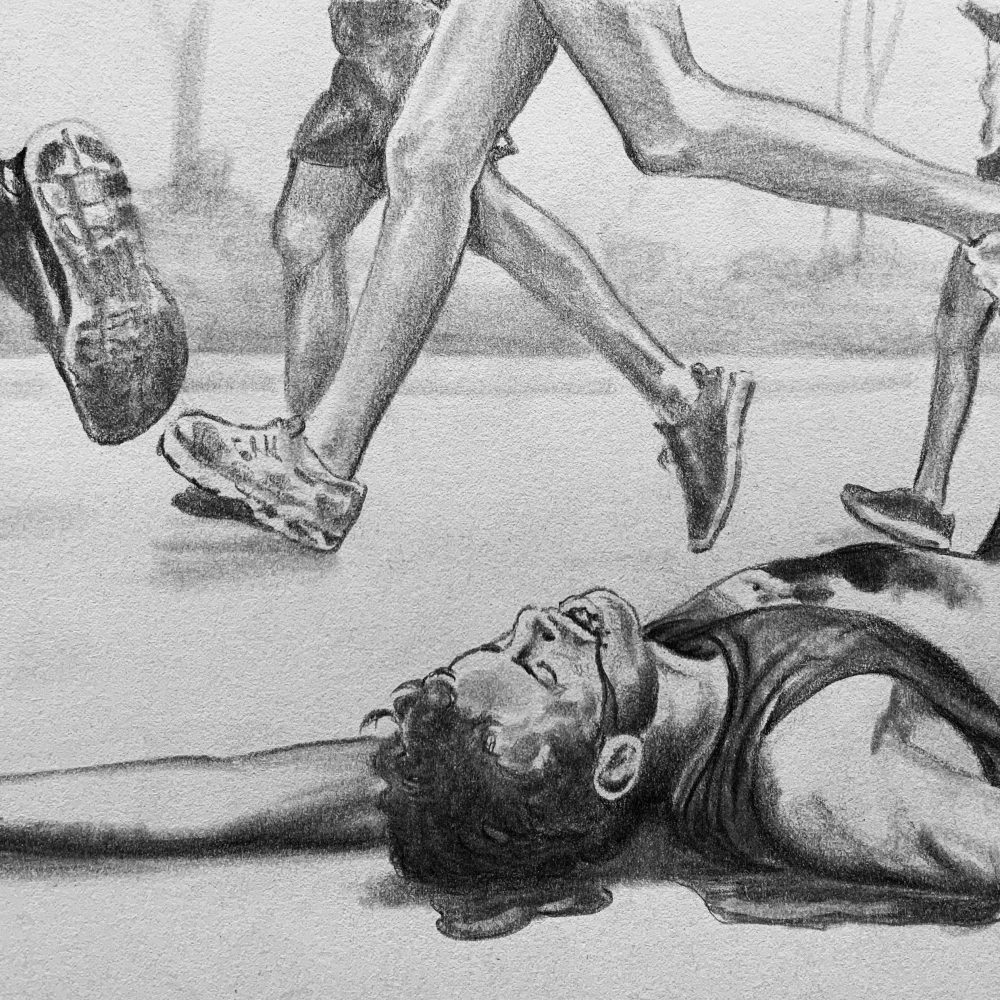 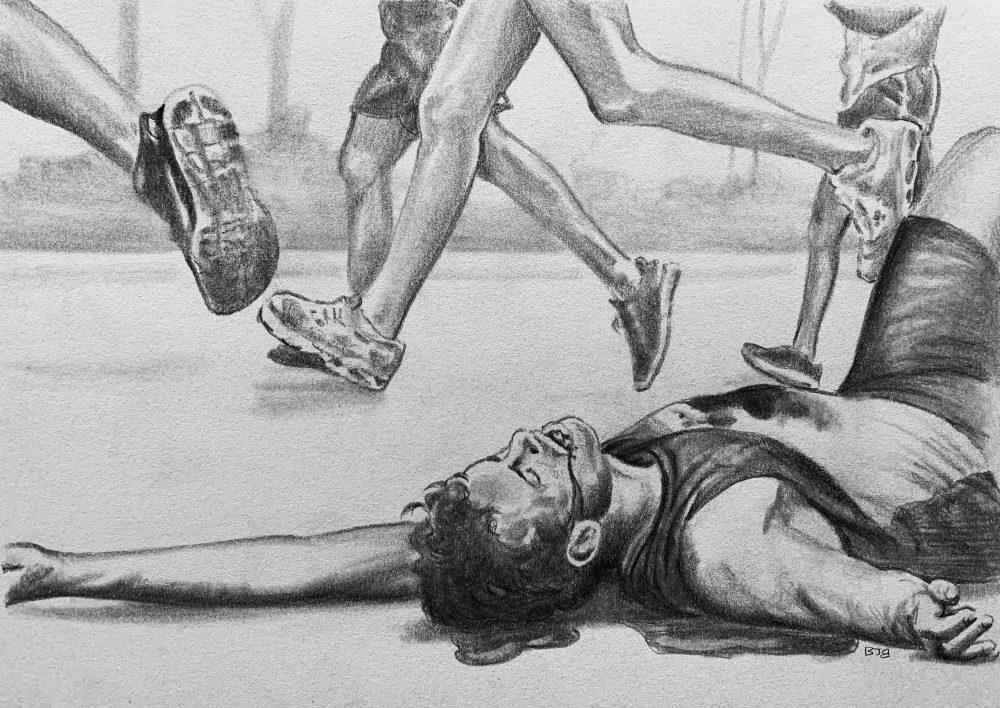 There is a person running a marathon who collapses in the street. And there is a person who’s the target of a professional hitman. And what you need to know is that this is the same person.

Long before an ambulance arranges itself beside the runner, a news van encircles the perimeter.

A couple decodes these events from a first-floor window. This window is cracked open. Their view is both better than the rest of the building’s and worse, depending on what you’re trying to witness.

“Here are these running enthusiasts you’re always hearing about,” the woman says.

She’s momentarily uncooperative because she left her diary at a museum and someone returned it to her with commentary. Lo these many seconds ago, she buried it for safekeeping. She liquifies the root vegetables she calls her lunch while flailing her limbs in disapproval. Retribution would require unseemly amounts of effort since the most efficient route to the commenter involves flying hundreds of miles in the opposite direction.

Outside, a man looms above the runner. He claims to be psychic, waving around a special permit.

“It’s a good thing this happened, you know,” he says.

He leaves, only to return three minutes later offering hypnosis.

When an EMT steps forward, the man says, “Measures have already been taken.”

A volunteer offers another runner a Dixie cup of chilled tap water.

“No thanks, I’m waiting for something better to come along.”

Yet another participant appears to be rehearsing an anticipated conversation.

“Why do you accuse me of that? I’m not a controlled substance, so why would I expect them to work on me?”

This person then collects himself, observes the scene, and simulates reactions from the crowd.

The hitman hadn’t planned on absconding from his trajectory, but even before the collapse, a cost-benefit analysis had proven his mission dubious. He is regarded in certain circles as untraceable. He has accumulated numerous ties to the community.

He approaches his intended victim as they bring out a stretcher.

“Listen, this isn’t working out. It’s never been a good fit. We both know you’re perfectly capable of dying; it’s not about that. You’ll receive further instructions from me in three to five business days.”

The runner nods. This runner is very understanding.

The hitman enters the nearest building.

“Do you validate?” he asks a woman in the lobby.

She confirms, escorting him to a desk.

He knocks on the couple’s door afterward.

“Long time no see! What are you doing here?”

He steps inside and pulls a warm Power Bar sample from his pocket.

“Thanks. I’ll put them with the others.”

The couple has installed an aggressive amount of plaques on the walls. One reads: YOU HAVE ENTERED THE LIVING ROOM.

“Care to join us in our weekly plaque-dusting venture?”

“What is with some people? I have little patience for vandalism,” he says.

They hand him drinks, snacks. They tamper with his thoughts.

“Did you come by for the race?” one tries.

“Why don’t we leave well enough alo—together?” he says.

They are in the vicinity of snooping.

He redirects them with: “How did your art exhibition go?”

“We haven’t spoken in years. And you remembered.”

“I have a good memory for personal projects.”

They huddle on a loveseat and await the evening news report.

Across town, our self-proclaimed soothsayer shouts “lonely” in a crowded theater, setting fire to his pride.

Claire Hopple is the author of four books. Her fiction has appeared in Hobart, Vol. 1 Brooklyn, The Rupture, New World Writing, and others. Her writing has been nominated for the Wigleaf long list and the Pushcart. More at clairehopple.com.