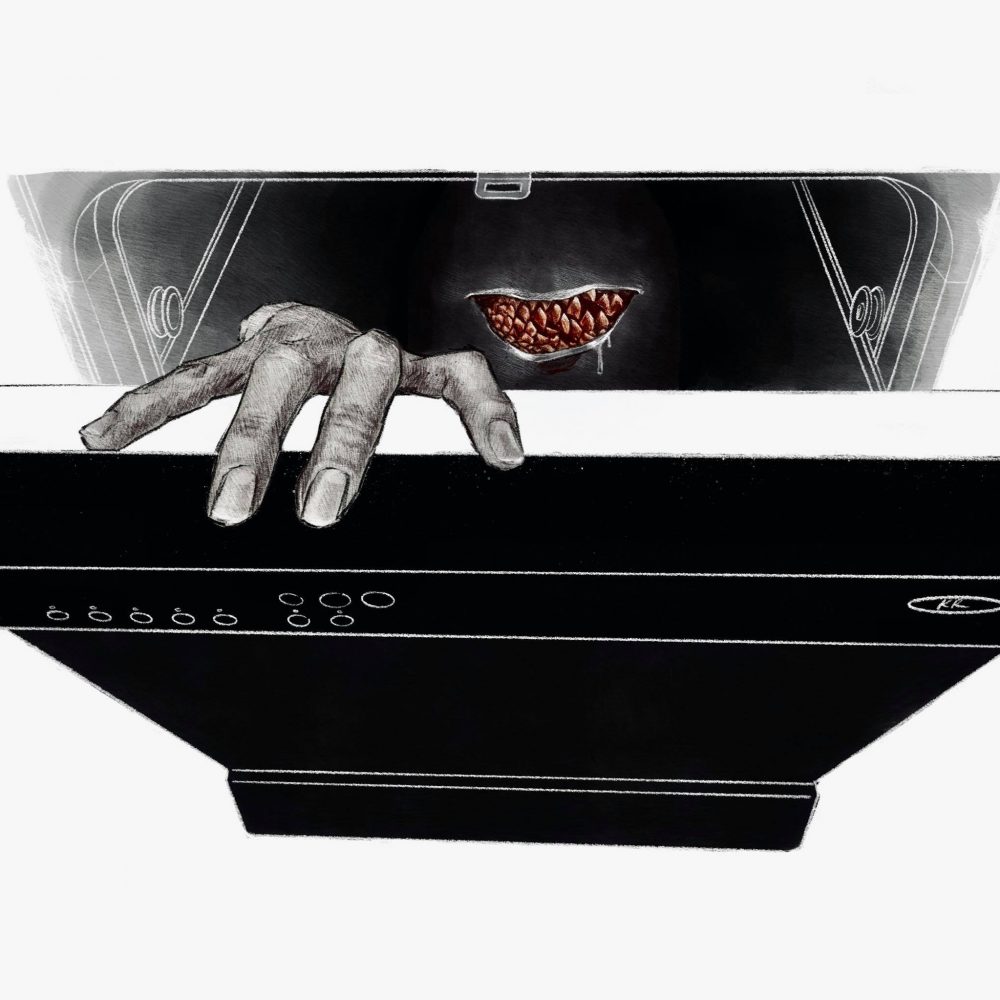 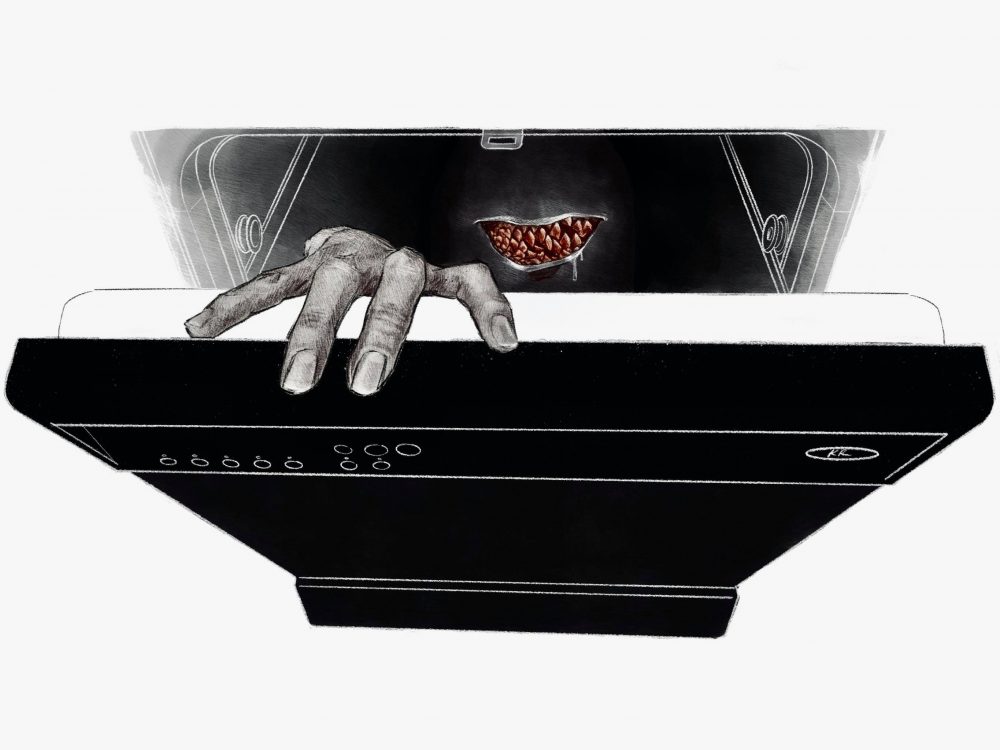 I pause with my hand on the dishwasher. “Why not?”

“Is that right?” The reflection warps my smile into a sneer. “What sort of man?”

A drawstring tightens in my son’s forehead, pulling his eyebrows together. “A bad man. He has a mouthful of pinecones, and there’s snow on his back that never melts.” A note of accusation creeps into his voice. “Don’t you remember?”

I shake my head, but something skitters behind the baseboards of my heart. A scrap of a nightmare from which I had woken up clawing at the wallpaper with my nails.

I swivel to the sink and turn on the tap. As I wait for the water to warm, I feel the weight of my son’s eyes lift from me, and when I crane my neck around, I see him staring at the dishwasher.

“His name is Marley. He likes to bite.”

“Hmm.” My shoulders relax as I squirt a blorp of green soap into my coffee mug. Marley is the name of a girl in his kindergarten class who used to wait by the slide and bite the other children when they reached the bottom. “He doesn’t sound very nice.” The soap smells like poisoned apples and foams wildly when the hot water hits it.

My son snorts. “Obviously. That’s why we can’t let him out.”

“Right.” I peel the sponge from the edge of the sink and hold it under the tap, something I have done many times but never with such an awareness of its texture. Wet sores bloom and spread on its dry skin until the ragged chunk is heavy with its own liquid warmth.

An appliance door opens with a smooching sound, but—just the refrigerator. My son extracts a log of string cheese and wanders off to read comics.

Laughing at my own relief, I squeeze the sponge, sending ropes of glass beads rattling against the stainless steel. I plunge it into the cave of the mug and twist it back and forth. The tendons in my forearm squeak in protest.

I try to recall the list of things I need to do today, but my brain’s slide projector keeps shuttling back and forth between two images, one of empty wheeled dish racks and another of a figure bent and folded in a wiry cube, elbows pressed against the utensil tray, pupils dilated with unspeakable wants. Schrödinger’s dishwasher, I think, willing myself to find this amusing even as I remember the girl from the playground was called Beth, not Marley, and she was actually a pincher. Whatever happened to her?

Suddenly the water runs ice-cold, shocking my skin, and I drop the mug. The handle snaps off with a crack, leaving two jagged stumps like broken fangs. I shut off the tap, and the silence is staggering.

“What was that?” My son calls from the living room through a mouthful of mozzarella.

“Nothing.” A ribbon of foam snakes lazily toward the drain. “Broken cup. Everything’s fine.”

“Okay!” Has he forgotten the presence of evil? Or—this is almost too horrific to contemplate, yet feels more likely—simply accepted it as a feature of his home?

A single bubble detaches from the mass and drifts toward the ceiling, its surface squirming with rainbows. It floats not smoothly but in strange little hops and jerks, like a frightened toad, and I hold my breath, waiting for the pop.

Laura Garrison enjoys vegetarian cooking and wandering moonlit cemeteries in her best nightgown. She lives in Virginia and is the editor of Jersey Devil Press.